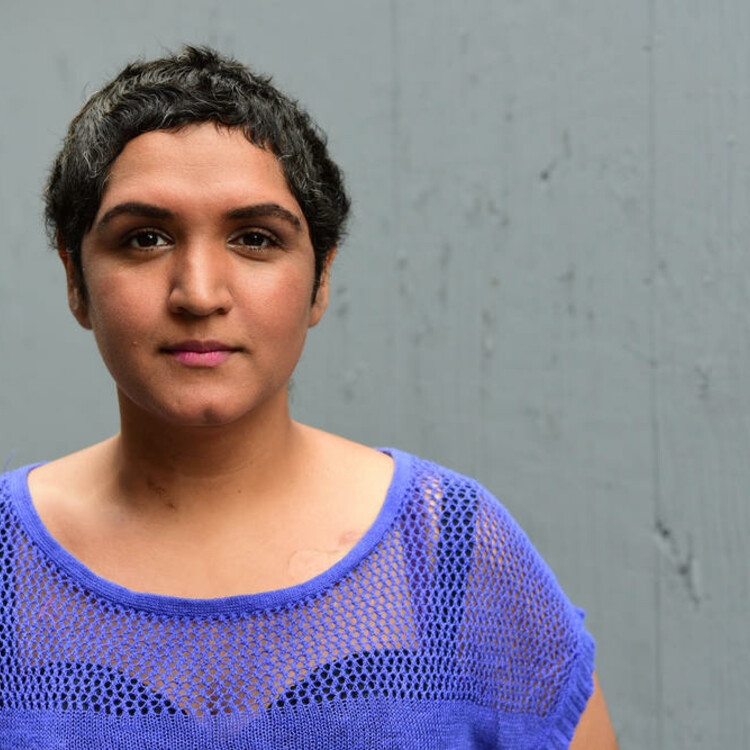 Creating a Culture of Play via Zoom

Several weeks ago, when Illinois began sheltering in place, I was told that my next project—an Introduction to Performance class at DePaul University, using Emily Mann’s Antigone adaptation as its core text—was now going to be rehearsed and recorded online via Zoom, as a radio play. As a text-based director who loves heightened language plays, working on a “radio” production of a play that is 100 percent oral/aural action (as my pal Lue Douthit likes to say) was really exciting to me. I expected that a lot of my text analysis skills would transfer well to this new format. However, as a community builder, I was faced with a challenge: I’d never met these students in person, and therefore it was impossible for me to read the room.

It’s deeply important to me that the culture of my rehearsal room feels open, collaborative, respectful, and playful. I’m a horizontal leader and I want my rehearsal room to feel like a dialogue; teaching and rehearsing via Zoom makes me feel like I’m performing a monologue. 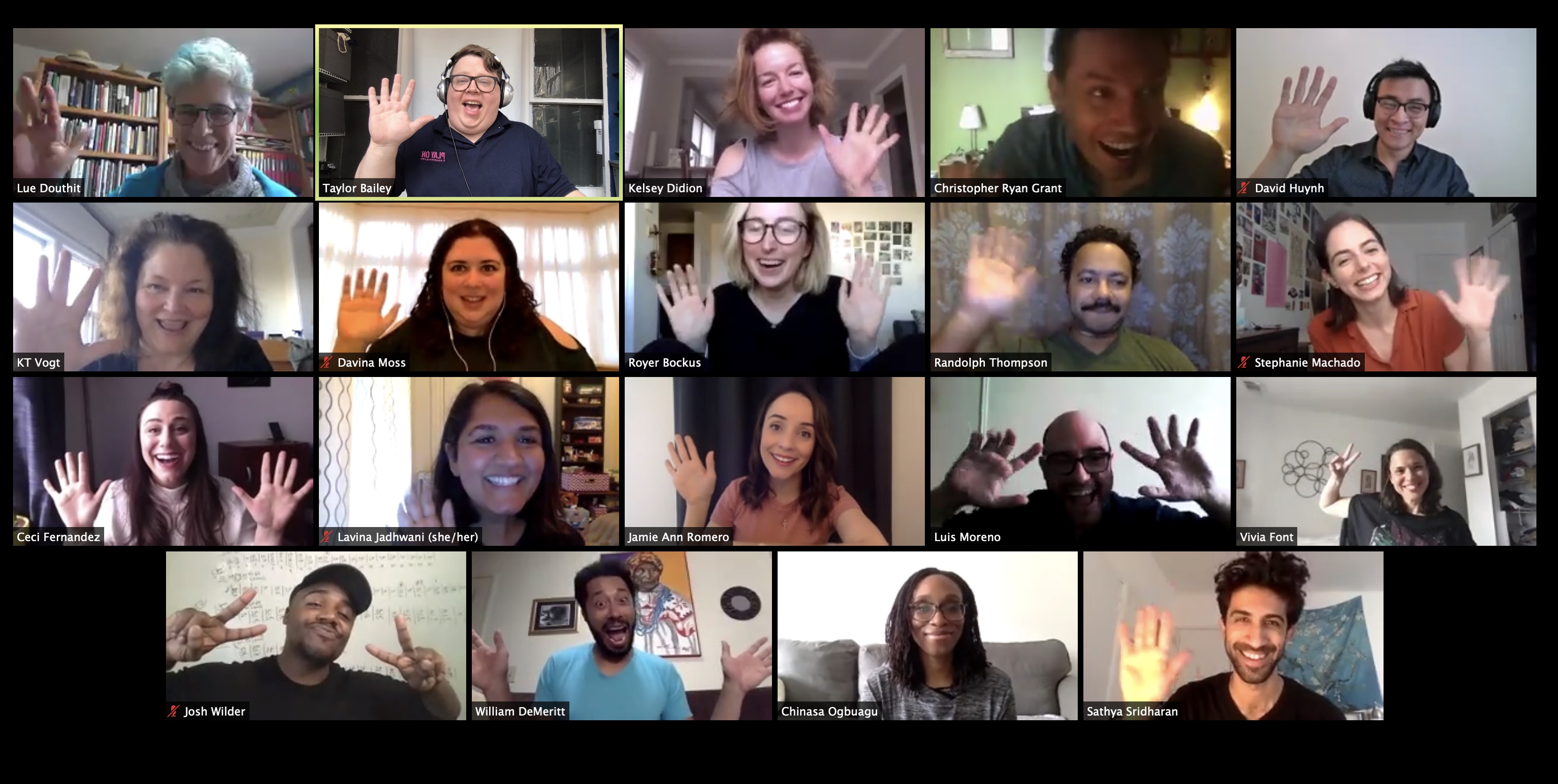 I’ve employed a couple of techniques to help me feel less like I’m shouting into a void, which I’ve also used as a participant of other Zoom events. I share them here in case they’re helpful to you. Your mileage may vary, as they say, so feel free to adapt/add your own strategies!

1. Start with a Check-In

This is a tool I often use during in-person rehearsals as well, but, in short: if you want to get a sense of how the room is doing, maybe… ask? My friend/colleague/mentor Kevin Coleman explained once, “Our minds have the ability to time travel”—backward to that thing that happened yesterday, forward to that thing that has to be done tomorrow, etc. Checking in gives me, as the facilitator, a chance to gauge the temperature of the room and gives the participants an opportunity to ground themselves in the here and now.

Depending on the group, I adjust the prompt. If it’s a group that knows each other well, I focus on naming the feeling(s) that are coming up for them today; if it’s a group that’s meeting each other for the first time, I might frame the check-in more informally. For example, my pal Jack Schultz (an expert in “sneaky vulnerability”) once asked his class to name something that inspired them that day; I often borrow that prompt for classes where I’m meeting the participants for the first time.

I give a quick Zoom “tour” at top of all my classes now and encourage people to use the Reactions and Chat features, as they help me read the room.

2. Games and Warm-Ups: Keep it Simple

I’ve found that the most successful group warm-ups and centering exercises involve activities that are already familiar to the participants. An online platform is distancing, but utilizing activities that are familiar can bring everyone closer together. My brilliant assistant director, Jose Dominguez, led my Antigone cast through a game of catch online—we mimed tossing and catching a ball, and we said our target’s name out loud to make it clear who we were throwing to. After introducing the game with a “volleyball,” he then asked for suggestions from the group about what kind of object we wanted to pass around next.

That company also responded really well to five-minute dance parties—some people stopped their video while they danced, some moved out of frame, some stayed in it. That freedom allowed me to express myself more comfortably than I could in person!

Listen, everyone is afraid of talking over each other and/or out of turn on Zoom. I get it. I’ve become a big fan of the “thumbs up” and “hand clapping” emojis that are found under the Reactions button. (Pro tip: You can change the skin tone of your emojis under Preferences → General.) I give a quick Zoom “tour” at top of all my classes now and encourage people to use the Reactions and Chat features, as they help me read the room.

There are also functions like “hand raising,” found under Participants, that seem to be structured for larger groups; I don’t use them with a group of twelve or less. In those circumstances, I find that the analogue version of those gestures (i.e. raising your actual hand instead of using the feature) tends to work best—it feels more human and is often more efficient.

I’m in two different online Shakespeare clubs right now (shocking, I know), and both of them organically chose to sign “applause” using ASL in addition to or instead of the emoji. In one of the clubs, when someone sings a song, many of us pull out lighters or use our cell phone lights to sway along.

Both Shakespeare clubs are having a lot of fun with the Rename feature on Zoom. (If you click on Participants and then your name, the Rename option should drop down.) During Romeo and Juliet, Paris changed their name to “Man of Wax”; I switched to “#breakupwithhim” as Celia in the second half of As You Like It; and both actors playing Antigonus in Comedy of Errors used the same name, causing chaos in the group chat.

Speaking of: When appropriate, the group chat can serve like the groundlings section of your audience (and to be honest, that’s where I always want to be). I was reticent to use it in a classroom setting for fear of losing focus of the room, but honestly I’ve found that it only enhances it. It’s an opportunity for people to stay engaged with what’s happening, and the private message feature is a powerful tool for me as a leader to be able to sidebar with participants and address their individual needs.

I also encourage people to play around with changing their profile photo and backgrounds; it’s a form of self-expression in a setting that can feel clinical (and sometimes I just use it so people can’t see my piles of dirty laundry, let’s be real). During Twelfth Night, the actors playing Sir Toby, Andrew, and Fabian changed their profile photos to bushes, so we could see them “hiding” while listening to Malvolio’s letter. During The Taming of the Shrew, a lot of tension was broken by people using various Italian landscapes as their backgrounds.

When appropriate, the group chat can serve like the groundlings section of your audience (and to be honest, that’s where I always want to be).

This is key to my directing philosophy in general and becomes especially important online. I’ve found that I get diminishing returns in a rehearsal or classroom setting after three hours; I tend to aim for two or two and a half, max. I know I need to work smarter, not harder, during synchronous meetings. An ounce of planning is worth a pound of rehearsal time.

This has meant that I often distribute my notes offline, as opposed to giving them verbally during rehearsal, in order to prioritize scene work and run-throughs in rehearsal. After sending notes via writing a few times, I felt like I was monologuing, so I switched to recording my notes to actors individually as voice memos. I’ll be honest that it was way more labor intensive on my end to type notes and then sort and record them, but they were so well received by my actors that I think it’s worth doing at least once or twice in an online process.

Finally, I like a clear delineation between work and play in my room, and I prefer a hard stop and start for breaks. I’ve found that the best way to accomplish that via Zoom is to find an online timer (there are many free ones out there!), pull it up, and then share my screen for the duration of the break. It’s super clear for the whole group and allows me to take my break fully. But if you like a softer stop and start, this might not be the tool for you.

Zoom will never be a substitute for in-person interactions, but it is a powerful tool for socially distanced collaboration. Like any tool, it’s best used when we play to its strengths. If we expect a screwdriver to act like a hammer, we’ll likely be disappointed. But if we embrace the strengths of the screwdriver, we may be able to create new, different, and exciting projects.