This piece is the first post in a new series that will explore what it's like for an artist to have an entrepreneurial mindset, and all of the different challenges that can come with it.

When I first heard of crowdfunding in 2010 the person referred to it as a Kickstarter. Now I roll my eyes at that descriptor. Kickstarter is a platform, but due to its phenomenal marketing and branding, it has become the word for crowdfunding, like tissues being referred to as Kleenex.

Being the research junkie I am I discovered that there were many crowdfunding sites that existed, and I quickly found out that my fiscal sponsor had a relationship with IndieGoGo, which launched two years prior to Kickstarter. I ran my first campaign sweating the whole time, freaked out to ask my friends and family for money. The psychological and emotional hurdles couldn’t be diluted by the helpful tutorials on their blog. This shit freaked me out.

I got through it though. And I started to understand how crowdfunding could not only be a helpful aspect of supplementing the cost of producing my work, but also a way to make my donors feel a part of the process. By 2012 the cultural tipping point of crowdfunding had been reached. Everyone and their mother seemed to be running a crowdfunding campaign. Start-ups and inventors, small businesses and pull-on-the-heartstrings fundraisers were filling up social media newsfeeds and getting the attention of bloggers and digital media across the spectrum.

All these campaigns were drowning out the arts-driven ones. Who’s going to win? An installation based on Dadaist anti-museums or funding a kid with Stage II cancer? Being able to be an early adopter of a tech-craze that allows you to run faster with a chip in your shoe or help a small theatre company tour three fringe festivals during the summer? It’s already difficult enough to prove the value of the arts experience, but when new modes of reaching a donor base are co-opted by joke campaigns and people looking for love, then the humor can get quickly diluted by the depressing reality that crowdfunding as a solid means-to-an-end was over before it started.

This is not to say that I don’t use crowdfunding as a way to raise money for my projects (hell, I teach artists how to do it), or that other artists should be discouraged from using the right platform themselves. It’s about knowing what you're getting yourself into and realizing how oversaturated the marketplace is with these asks that are flung at people every week.

Although arts-focused crowdfunding sites like Hatchfund and Patreon are more specific in terms of who they reach and why, the streams of social media and email blasts that people digest are full of half-chewed campaigns that are all vying for the same attention; using the same weird (and let’s face it, manipulative) psychological tricks to convince the potential patron that their project is unique and worth something. And that isn’t even enough anymore because it’s not about your output; it’s about what the person who donates gets in exchange.

The perk, or the reward a contributor receives, has become the goal. Being creative people, we want these “gifts of investment” to harbor the same quality that the campaign is striving for, and sometimes those creative options can cost a large chunk of the actual gift. A t-shirt needs to be printed and shipped, and so the 150 dollar perk loses twenty-two dollars right off the bat—never mind that this whole campaign is treated as income and will be taxable.

So the exchange in this context is not the same as sending out a traditional fundraising letter and asking your supporters to give because they care. That caring is now tied to a strings-attached clause that you must also come up with. The perk has to be doable and has to be sent within a non-specified and unspoken time frame so that the donor doesn’t feel shafted, therefore never giving to your future full-time-no-sleep-anxiety-driven campaign.

This is not to say that I don’t use crowdfunding as a way to raise money for my projects (hell, I teach artists how to do it), or that other artists should be discouraged from using the right platform themselves. It’s about knowing what you're getting yourself into and realizing how oversaturated the marketplace is with these asks that are flung at people every week. 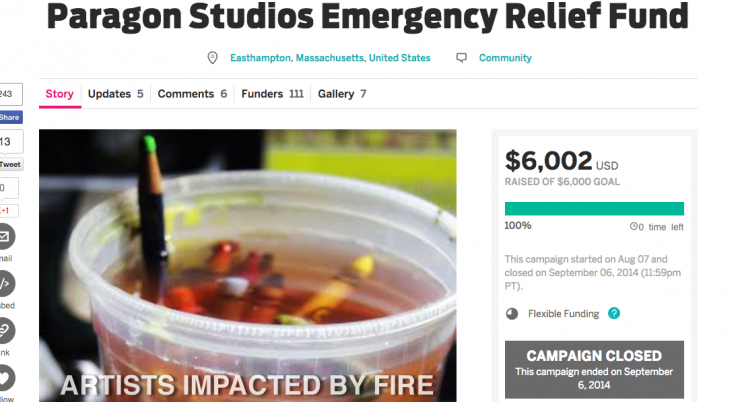 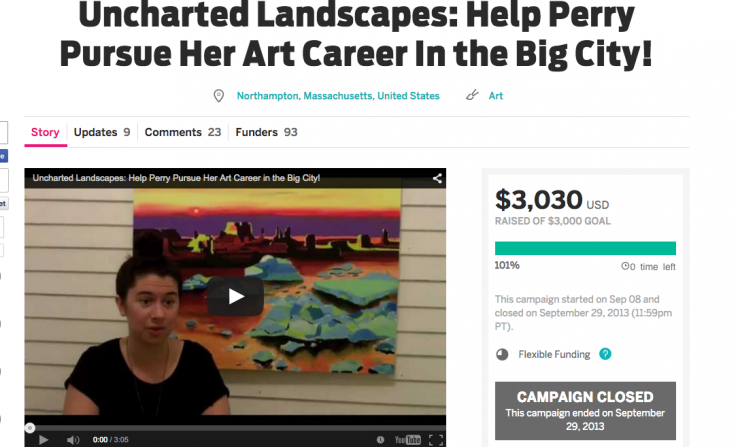 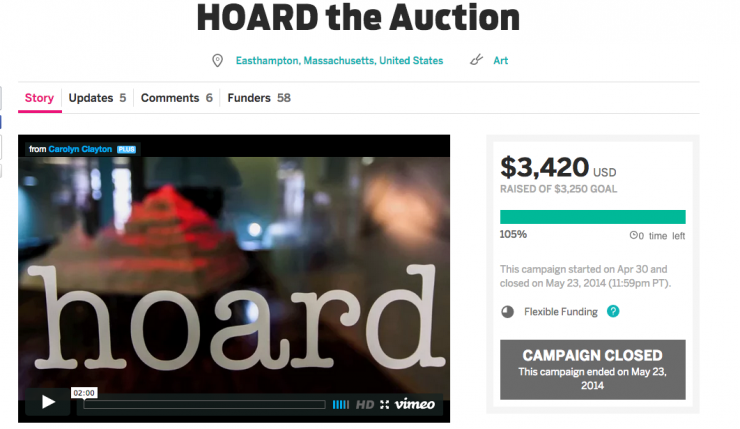 The main thing to realize is that your donor base isn’t changing. It’s still your friends, family, and super-fans who are going to give. The likelihood that a random stranger gives to you will be based on the subject of the campaign and whether that hits them emotionally. There are people like Amanda Palmer or The Oatmeal that give people hope that there is a windfall for the arts, but those two artists have significant followings that have been built from years of fan interaction online that is in itself a full-time job.

The question is whether there is a way to create a system of financial incentive for patrons that is based on the value of the art itself, by promoting generosity through the direct psychic benefits of experiencing artistic expression. Crowdfunding is relatively new, yet technology can help baby concepts that have high capitalistic tendencies to reach heights that only few can reach. Is this a system that has been corrupted to the point where its value to the artistic campaigners is finite? Do we need to create a new platform that takes the best elements of fellowships, grants, residencies, and fundraising models and blend them into something scalable that serve thousands upon thousands rather than hundreds?

How long will it be before crowdfunding becomes a passé method of engagement for the arts? Will it simply be tweaked into another exciting format that quickly gets co-opted by start-up junkies and celebrities who use their fame to appeal to fans swooning at becoming “co-producers” when their famous friends could easily finance their dream film?

I actually think every person in the arts should run a crowdfunding campaign (especially as a team) to understand the process and depth of the current engagement process with donors. It provides an immediacy in how to discuss your project, how to create a pitch that holds attention, teaches you how to ask and not grovel, and gives you a look at how marketing, PR, and branding all weave into each other. So even though it’s been corrupted completely, crowdfunding still has value. What we need to figure out is how we have and hold value within its structure.

Thank you, Howlround, for writing on this topic. I'm trying to raise funds for my new project, my site-specific, interactive play OCTOBER, and I do feel that the internet is over-saturated with Go Fund Mes. What's a self-producing gal to do?

Research research research. Watch pitch videos of projects similar to you that succeeded and failed. See how people laid out their content and how transparent they were. Go Fund Me is not an option for the arts. Use Hatchfund or IndieGoGo. Both are quite different from each other. Hatchfund is a non-profit who understands art-driven campaigns where IGG is anything goes.

Just know it's a full time job while your doing it including the lead up to the launch. Good luck!

As a person who gets asked for donations daily by friends and friends of friends on FB - there are so many causes, as you say - kids with cancer, a guy who needs a new leg, a friend who's nephew is trying to win a gold medal in the olympics for skiing and didn't make the us team and has to pay for his own training (not that one for sure) another who has legal problems, and then there's the animals - I tend to only donate to puppies and kittens, I have donor fatigue with ever other form of request. I personally hate being kickstarted-to... sigh.

Donor fatigue is a rampant problem. What I find most interesting is who and what people are willing to give to. It's sometimes feels like getting bad news and sometimes the greatest news that makes your day. More so the former.

Great article. I would add to your saturation point, point, by saying it's our friends and family who are the most tapped out - especially among artist communities where everyone's friend is an artist including themselves, it can be really hard.

Further, I would really like to see this discussion broach the topic of the "gatekeeper" revolution. When the internet was newer there was a great push towards what was called at the time, democratization of information and the abandonment of so called "gatekeepers."

Podcasts and Vlogs were supposed to finally give voice to marginalized artists. And in some specific instances it has. But to me it seems that more so we've destroyed some of the "load bearing" cultural structures in place which once supported and preserved space for the arts. Whatever the form. A kind of structure that allowed the arts to be more free.

Further, when finally we did cast off the "gatekeepers" (a term which I think may have been a slur to people who might more rightly have been called cultural guardians, and a term applied broadly to both the corporations and institutions which were seen as too old white and stodgy as well as the actual people who once held the proverbial keys) when finally we did cast off the "gatekeepers" the result was that we turned a once helpful and productive stream of information - focused, corrected and maintained by people who knew how, made productive and useful in powering society and culture within boundaries of professional ethics - into a destructive deluge of raw information with no direction context or use, other than to fill space - to be "content."

Thomas, I hear all that you're saying. Anything that gives artists freedom to expand their vision and broaden their audience and influence can quickly get adopted by those who see it as a cash cow system for something that can be monetized quickly. So instead of the reach being vast through the new form, the catalyst for positive change gets wrung out through people who have more influence and tastemaker status.

So we tap out those we know (again) and loose out on opportunities for sustainable growth. It's tough. I think the gatekeepers are always present, sometimes they are apparent, sometimes hidden. When the internet was seen as something to be utilized through commidification, the democratization was drowned out by noise. Now we have to cut through that noise continually. It ain't easy.