Finding A Narrative In The Noise

I was asked to co-teach a class that would, over the course of the semester, create a piece of devised theater around an environmental science topic. This is the second of three posts detailing that experience.

There is a time in every devising process I’ve ever been a part of when everyone in the room—and I mean everyone—just wants somebody to tell them what comes next:

What are we creating?

What are we doing, other than just talking?

Won’t somebody tell us, please?

Most of the time this reaction is a byproduct of having spent weeks and/or months absorbing massive amounts of information, the barest fraction of which could be used as material to create a full, engaging work of theatre. But which barest fraction?

For us, this moment comes around the end of October. We’ve just spent two months learning the basics of how our species impacts the planet we call home and finding ways to take those lessons and convert them to improv and ensemble-creation exercises. Along the way we’ve talked about best practices in sustainability. What choices can be made to help slow, stop, or even reverse the damage we’ve done to our environment?

Two-thirds of the way through the semester and we are bursting with information, but stalled in what to act on. We know three things: we don’t want this to be a traditional play; we want the audience to have agency; and we need to bring the funny. 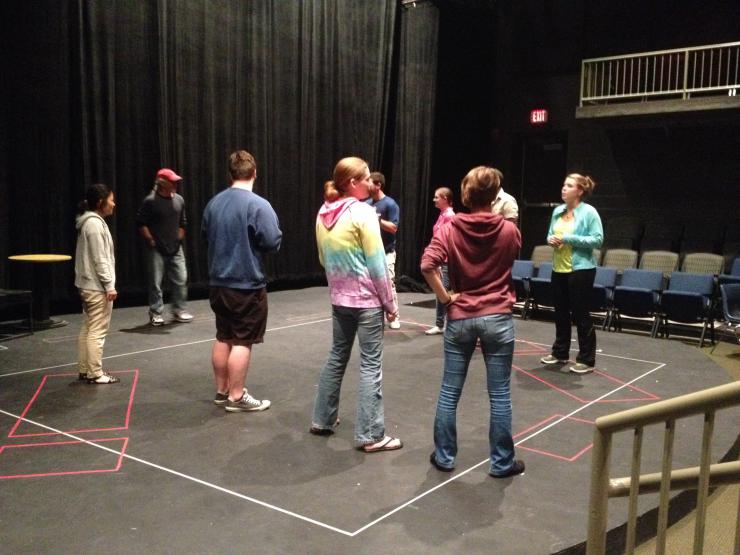 Because that’s another thing blocking us: All of the information is just so damn grim. The job of carbon-offsetting a single human life is herculean. That’s especially true in a Western culture where everything seems to be wrapped in three layers of packaging, and the tech we use to cut down on paper is made of plastic and electronics that have a massive carbon footprint of their own.

The students have been very impressed by those people who’ve managed to talk about this narrative while making people laugh. I shared a clip of George Carlin early on that we keep coming back to as a prime example of extinction gallows humor.

As Carlin so succinctly put, “The planet is fine. The people are fucked.”

But knowing what we don’t want the piece to be—a grim, dialogue-heavy slog through the science—isn’t enough to push us past the devising block. In a non-academic setting, I’d say, “Let me go away for a day or two and I’ll come back with something we can start working from.” Though I’m still tempted, I do my best not to prescribe or push. In the academic setting (and frequently in the non-academic setting), the benefit is in the process, not in the product.

In this, I find more parallels between creating theatre and saving the environment. A lot of our reading has dealt with the top-down and bottom-up forms of environmental conservancy: bottom-up are the grass-roots campaigns started by individuals and communities, top-down are mandates put forth by governments.

It’s the same in academic devising processes. A balance has to be found between how much we push students in a particular direction and how much freedom we give them to come up with their own solutions. I opt in the direction of as bottom-up as possible.

As frustrating as being blocked can be, our students have proven they are more than capable of prying their way outside of whatever box they find themselves in.

It’s right at this time that we invite the members of Dance Exchange to take over our class for the day. A Tacoma, Maryland-based group, Dance Exchange describes themselves as “an intergenerational company of artists that create dance and engage people in making art.” This year, they are some of the artists invited to Washington College as part of the SANDBOX initiative.

They lead us through a series of storytelling and movement exercises to get our ensemble up and moving and thinking, both as individuals and as a group. I wish we’d had them in far earlier in our process.

They end with the simplest of exercises. We write what we think is the most pressing question regarding this project on a piece of a paper, stand in a circle on the stage, and one-by-one reveal what that question is to the rest of the group. In written responses to Dance Exchange’s visit, many of our students identified this as the most eye-opening moment of the day.

“I felt that was very powerful,” wrote Rebecca Potochney, a senior Environmental Studies major. “It was deeply emotional, simple, moving, and meaningful. Not only were we asking questions in regards to who cares and why about our environment, but we were using non-verbal communication [to do it]. The eye contact intensified the situations too. It was as if we were saying to each person, ‘Here, read my question,’ and it made it infinitely more personal.”

Though Dance Exchange’s visit came later than I wished, it manages to shake something loose. The very next class following their visit, we sit down in a circle and don't break until we come up with the concept for the final performance. As soon as the students start talking about it, I can tell by their excitement that this is what we should start working on: What if we give the audience a way to make choices around environmental sustainability that will predict what kind of future they’re going to end up with? And then we perform it for them.

Playwright and professor Theresa May talks about creating a show about the planet, Sky Woman, and the Youth Climate Movement, and how collaborating with students enhanced the development process.

A River and Recovery in Many Acts

Maine artist Jennie Hahn explores environmental stewardship in Maine’s Penobscot River Watershed with the performance project IN KINSHIP and shares her three guiding principles for making art in a time of climate change.