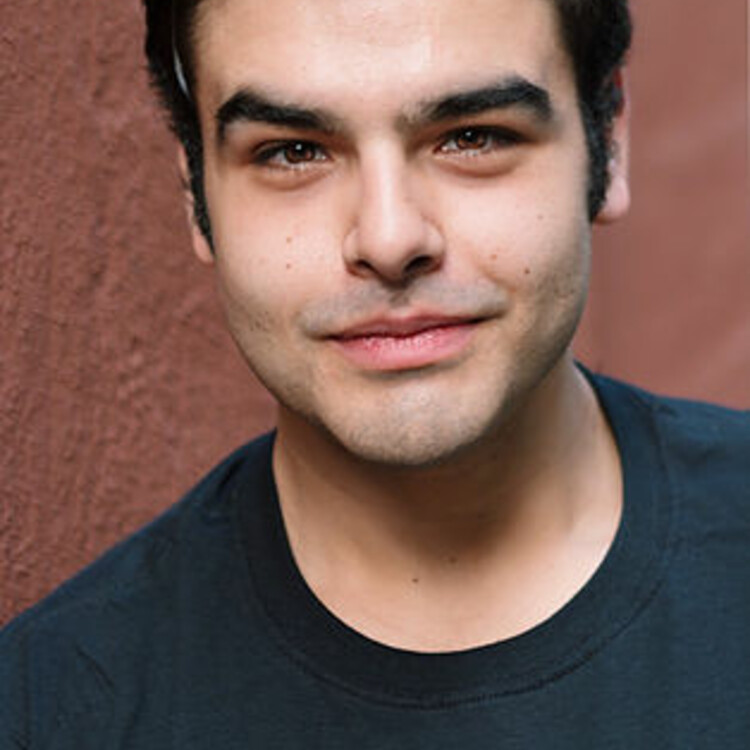 After the triumphant bass of Cardi B’s “I Like It” flares throughout the theatre, Kristiana Rae Colón’s new play good friday opens with vignettes of women and their bodies projected up on a screen. Each woman gazes strongly into the camera that is recording them, grounding themselves for what will be a triggering play that ultimately challenges all notions of revolution.

In the piece, which made its startling and evocative New York premiere at the Siggy, the Flea Theater’s forty-six-seat underground space for emerging talent, Colón uses starkness and violence to direct the audience to a place where they have no choice but to listen, believe, and imagine possible solutions for our trauma-ridden nation. good friday suggests a radical and seemingly insane solution to end all on-campus assault: a school shooting.

Colón investigates society’s pathological complicity around the issues of sexual assault by demanding a space for reframing #MeToo feminism at the intersection of gun and sexual violence. good friday articulates the question that academia and white power have long dismissed: What will it take to end the tragedy of assailants, particularly men, who harm women through sexual assault? Colón communicates that the only solution is an extreme one because the issue at the heart of it is extreme. Throughout the play, this “fight fire with fire” mentality becomes rationalized as extremes are articulated. You either listen and believe, or you don’t. And, if you don’t, that is the problem. 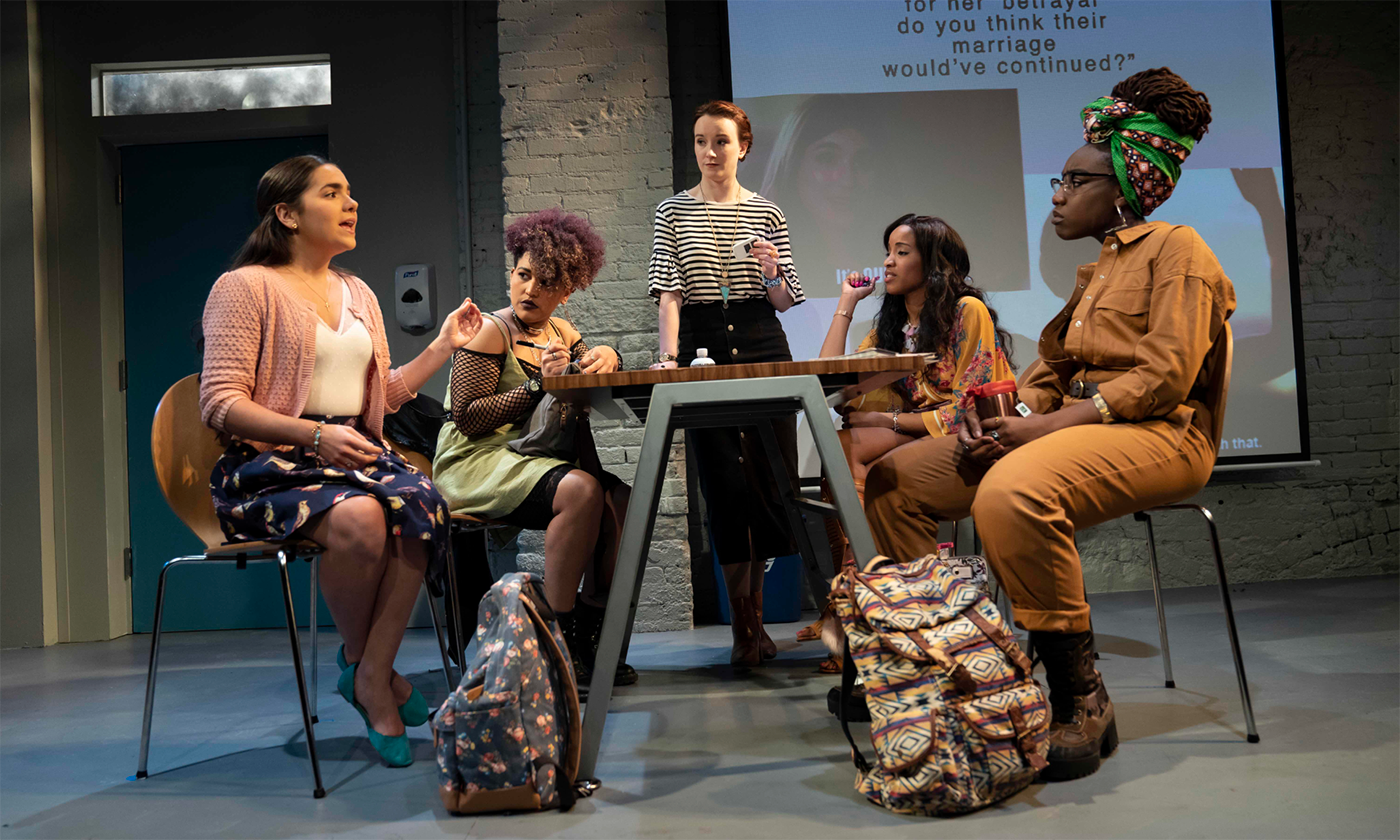 good friday by Kristiana Rae Colón at The Flea Theater

The play’s title is definitely a religious reference, and it is with the character Sophia, a devout Catholic student who uses prayer to get through the day (played with the emotional genius of Raiane Cantisano), that she is able to make palpable the conflict between religion as a survival mechanism and as a backbone for one’s actions. Colón contrasts Sophia with Asha, the strong, intellectual adjunct professor (embodied with the thoughtful stillness and fervor of Erin Noll), who uses pragmatism and research to guide her way. This contrast introduces the audience to two valiant forms of feminism: a religious one (where Sophia puts trust and hope in a higher being to take care of women) and a pragmatic one (where Asha places thought on what should be done).

Colón’s parallel of the campus massacre to Good Friday is nothing short of wonderful. The same way a bloody crucifixion is what it took to get people to believe and support a God-led universe and become ardent individuals practicing the Catholic faith, Colón posits that something big might need to happen for a larger cultural shift in the respect and belief of women. It demands the question: How are there people believing in a god they cannot see, yet not believing and supporting victims in their very presence?

good friday articulates the question that academia and white power have long dismissed: What will it take to end the tragedy of assailants, particularly men, who harm women through sexual assault?

The story’s classroom setting is first interrupted when blood soaks through the shorts of one of Sophia’s classmates, Crete (played skillfully by Ure Egbuho), who soon leaves the room. Sophia is sick at the sight of blood—Colón’s clear and definitive personification of women and men negatively pathologizing the natural humanity of the body. There is then a second interruption: gunshots heard on campus, which shake the Siggy, creating a creeping sense of an approaching killer. The gunshots continue to swell throughout the campus and what was moments ago a place for debate on Ibsen’s A Doll’s House becomes a safe haven for the group. Crete returns, having cleaned herself, and tells her classmates of the sight of dead bodies in the school’s hallways. Emme, the patriot shooter (played with detail and commitment of Clea DeCrane), then enters the space. Holding a gun, which is nearly several feet away from any audience member, Emme yells at the women, asking them to stand still against the wall. This act instilled even the audience with fear; when I saw the show, the person next to me immediately broke into tears at the sight of the gun.

We learn that Emme was motivated to shoot the school’s rugby team, including Crete’s boyfriend, for having suffered a brutal sexual assault. As Emme describes the attack and the dark way it has affected her, the shooting becomes less scary and increasingly more rational. The audience is called to grapple with the dramatized negotiation of “that should not have happened to you” and “the perpetrators deserve to be killed.” 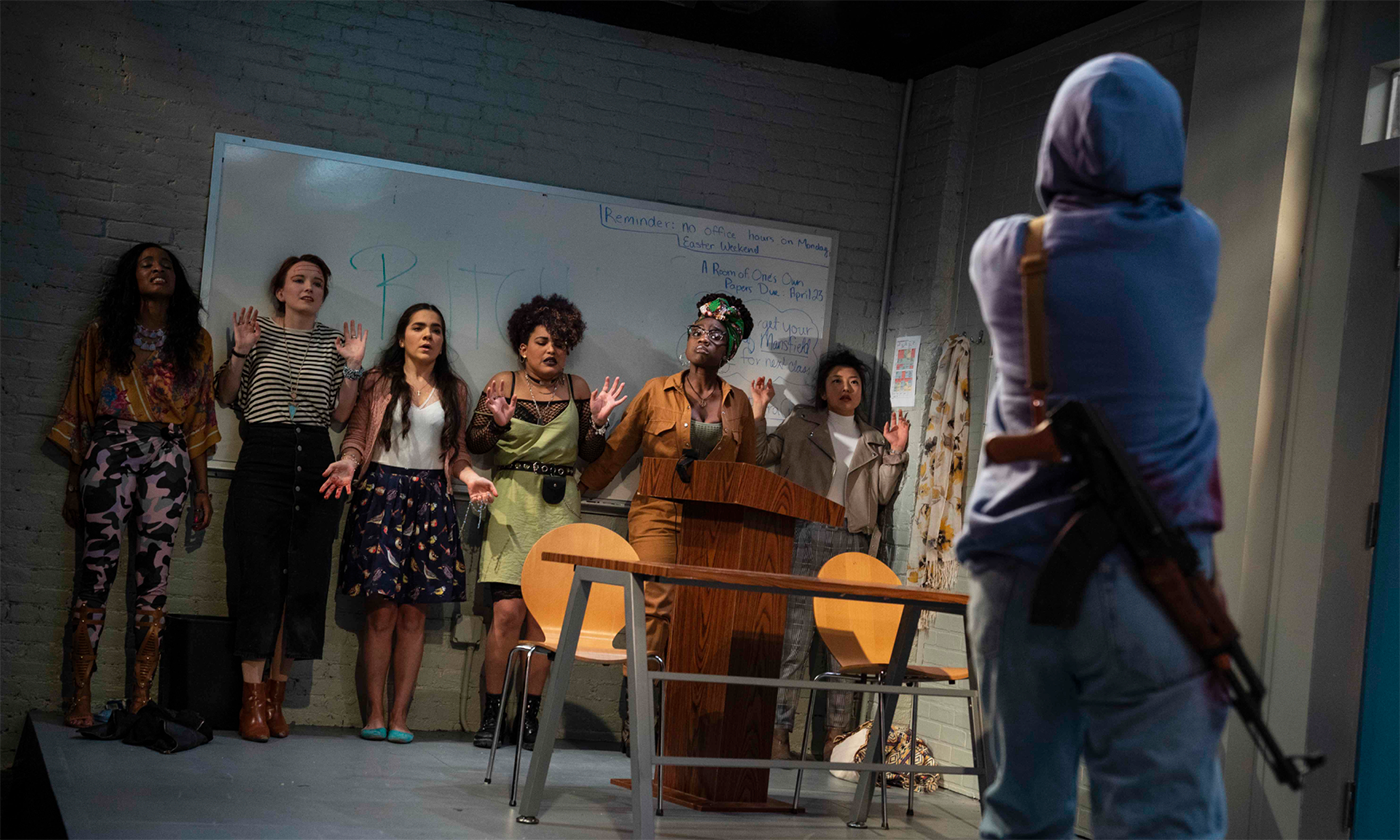 good friday by Kristiana Rae Colón at The Flea Theater

Colón uses an evolved personal aesthetic that defies standard grammar and formatting—not for her own artiness, but rather as a brave and dynamic eschewing of the colonializing origin of art. By adding spaces and line breaks throughout her text, Colón has encouraged the performers not to submit to the language on the page but to arrive at an emotional truth themselves—a place of relentless veracity about the current problem with society. Listening to Colón’s language embodied skillfully by a devoted cast brings an immediacy to the issue, slowly but surely offering space for audiences to question: Is something this bloody that bad? She reclaims what might be called a “Pinter Pause” with an urgent call for help. Whenever there wasn’t a word spoken or an action scene, there was a strong sense of the audience thinking: “What must I do? How can I fix this?”

Colón’s piece is one of unashamed profoundness. Wit and humor keep the engines of the play well oiled, but it’s her commitment to bold and truthful thinking that make the piece unforgettable. Colón’s seemingly absurdist solution (i.e. shooting the rugby team) is one similar to the theatre of cruelty. The action and words of her piece immediately jolt the audience to think quickly and feel strongly for what is going on. The ending of the play signifies that solving the grave issue of assault and violence is not in the hands of one sex or another, but, rather, is a collective effort that requires direct action strategy.

If it were not for bracing playwrights like Colón, today’s theatre would lack the important conversations and action plans needed to transcend beyond theatre’s entertainment structure.

good friday rests in a place I call “theatre of the unashamed.” If it were not for bracing playwrights like Colón, today’s theatre would lack the important conversations and action plans needed to transcend beyond theatre’s entertainment structure. In composing her piece in an unashamed way, without filter, without fright, and in a place where morals are seemingly curtailed, Colón urges the audience to transfer their passive spectatorship into something more reflective. She activates the liminal space and blind spots in the audiences’ minds by positioning them in a situation where they would have to choose between believing someone or killing their perpetrators.

Colón’s piece does what some people might be too afraid to do or say. It challenges the idea of conversations as a way of working and healing through America’s disgusting qualities. It places the audience in a position to really reflect on what action they might take within their own communities to prevent the essentialism of the violence presented in the play. If we are to dismantle society through unlearning—case by case, person by person—how can we support the survivors? I think Colón’s answer is community, and, in developing a sense of community, first onstage between the performers and second in the audience, she begins to build a coalition of supporters and fighters.

So, does Colón’s solution to the grave issues of assault and violence really entail killing off violators? Yes. And no. Yes, because if the women in the show are able to kill off the patriarchy’s structures and view of themselves, they are able to move forward and build a community that is stronger than a man’s illest wish. It requires men and women to recognize that when they have privilege, they can and should listen and speak up. And it requires the acknowledgement that sexual assault in the United States, particularly on college campuses, is a grave issue—so much so that 11.2 percent of all students experience rape or sexual assault on campus. No, because Colón’s Artaudian usage of violence is in essence a genius tactic of artfulness that contains a strong positioning power for the audience. good friday clearly demonstrates Colón’s appreciation and respect for human life and the body. And, with such respect to humanity, Colón crafts a play that leaves the audience in a place to honor their own selves and be compelled to honor and stand for others.

Sexual assault does not need to be complex. It needs to end. Without prescribing a specific step-by-step guide on how to change this issue, Colón proposes that if people are not willing to step outside their own box of beliefs to meet the needs of a trauma-trapped nation and develop a community of support and protection for women, then a radical solution is a rational one.