The Latest from Cornerstone’s Bridge Tour

Here’s what I remember about meeting Karen Covarrubias:

Four years ago, members of Cornerstone Theater Company were in the underserved community of Pacoima auditioning for the role of Taco Man for Sigrid Gilmer’s brilliant farce, It’s All Bueno. Someone sent Karen over to audition. She had just done her first play, loved it, and was eager to do another one. A girl in her early twenties, she wasn’t exactly what Sigrid had written, but you have to be flexible when casting for Cornerstone! Karen was fearless and terrified at the same time, which pretty much describes her attitude towards everything. She got the role. 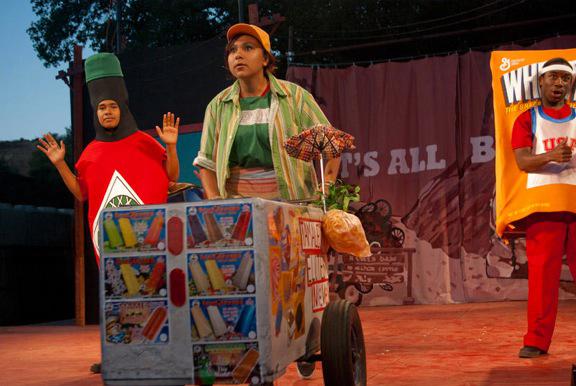 Karen was as cool as a cucumber on stage. She flirted with the audience, punctuated others’ jokes, she was playful, silly, and fun. You could tell she was enjoying herself tremendously.

We stayed in touch after the show, but she hasn’t done much theatre until just recently, including participating in California: The Tempest. I interviewed Karen on the phone to talk to her about her experiences and how she got involved in the tour.

Karen: So, the acting bug was bugging me. I thought, I’m going to see what’s happening with Cornerstone, and Paula [Donnelly, Cornerstone’s Director of Engagement] said, “I was just thinking of you!” My thing is, I believe everything happens for a reason. Something in my heart told me, you should see what’s going on. And so I did. Paula said, “We were wondering if you would be interested in joining us for this project?” And I said, “Where do I sign up?!” And she started telling me more about it and then I spoke to my parents...

The way people were with each other, just made me a better person. Everyone had each other’s back—from tech people, to actors, to management. I grew up. I learned to appreciate each person individually. I feel like I’m just going to keep growing and learning.

Juliette: What was it like talking to your parents about it?

Karen: Honestly, it was kinda hard. I was scared to tell them I want to do this, scared that they would say no to me. We were sitting at the dinner table and I said, “So, I have something to tell you guys,” and my mom said, “Am I gonna be a grandma?” And I said, “No, no, nothing like that! It’s just that I’ve been talking to Cornerstone...” And after I explained it to them, my dad said: “Who is going to be with you? How are we going to be communicating? Are you going to be safe? What if something happens to you?”

Juliette: Can I ask you how old you are?

Juliette: It seems like your parents are really protective. Why is that?

Karen: ‘Cause I’m the oldest and the only girl.

Juliette: Where are they from?

Paula told me that one of the things Karen said she'd learned on the tour was the sheer existence of the towns they visited. She really didn’t know much about anything outside of her neighborhood.

Karen brought her parents to Cornerstone for a meeting with Paula so they could learn more about the tour. Paula showed them a map and photos from the location stops and headshots from core cast members. She talked about the cast’s background and where they were from. And that, like Karen, almost all of them had been in a Cornerstone show before.

Karen: I could see my dad was listening hard. And my mom, with the little English she understands, said, “I wish I could go with her!” And she laughed and said, “Me kidding, me kidding.” And then we went home and my dad’s like, “Are you going to be okay without your mom?” I said, “Yeah. I’ll be fine.” And he said, “If this is what you want to do, then by all means, go for it.” And my mom says, “Okay. As long as you text me every morning, evening, afternoon, night.” And I said, “Mooooom.”

Juliette: So now that you’ve been on the tour, how do they feel? Did they see the show?

Karen: They saw it when we came to Pacoima on February 6th, which is my birthday. They really liked it. When I got back from the first leg, I told them all about the experience and showed them pictures. Before joining this show, when I did theatre, my mom would say, “This is not going to get you anywhere,” and I wanted to prove her wrong. I would tell her, “Regardless of what you say, this is what I’m going to do.” And she started to notice, little by little, that this is what I like to do. And anyone’s words weren’t going to matter to me. So she started supporting me and said, “Then if this is what you really want, go for it. Do it. Hold on tight and don’t let go. Be the best you can.” Now they are full on supportive, 1000%.

Juliette: What kinds of things have you learned on the tour?

Karen: It’s a Shakespeare play. The language—some Shakespearean words are not regular English. The way it feels in your mouth when you say those words. Peter (an ensemble member) would say, “Be Minerva, think Minerva, see yourself on that mountain.” Every time someone would correct me, I would not take it the wrong way. I’m still researching! I just watched a version of The Tempest on YouTube. I’m like crawling to Minerva. I’m barely getting there. I feel like I am her on stage, but I want her to be inside of me when I’m not on stage. I feel like I’m not there, but I am. 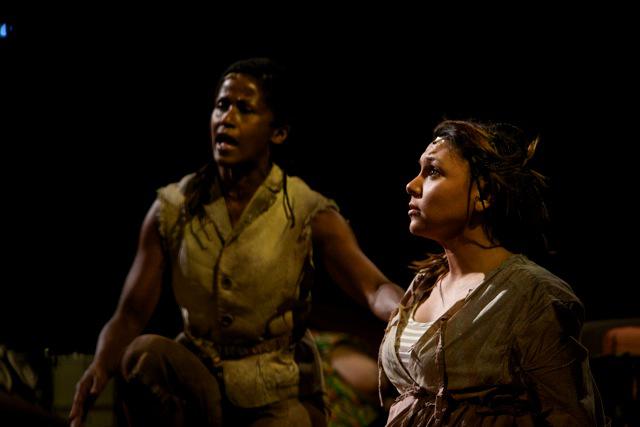 I asked Paula how she feels Karen has changed on the tour:

I feel like she has a confidence in her place within the cast—a real ownership within that little tribe of thirteen. I remember going to Lost Hills, and asking some kids what they liked about the play, and these two girls were like, “I really like that girl who’s the daughter...Is that her voice? Is that the way she talks?” They were connecting with a Latina girl onstage and that was really valuable to them and they hadn’t seen it before. And when I mentioned that to Karen, she just said, “…Ohhh!” She didn’t have that much to say, but I think she’s just taking it in.

Juliette: How has the tour changed you, Karen?

Karen: The way people were with each other, just made me a better person. Everyone had each other’s back—from tech people, to actors, to management. I grew up. I learned to appreciate each person individually. I feel like I’m just going to keep growing and learning. 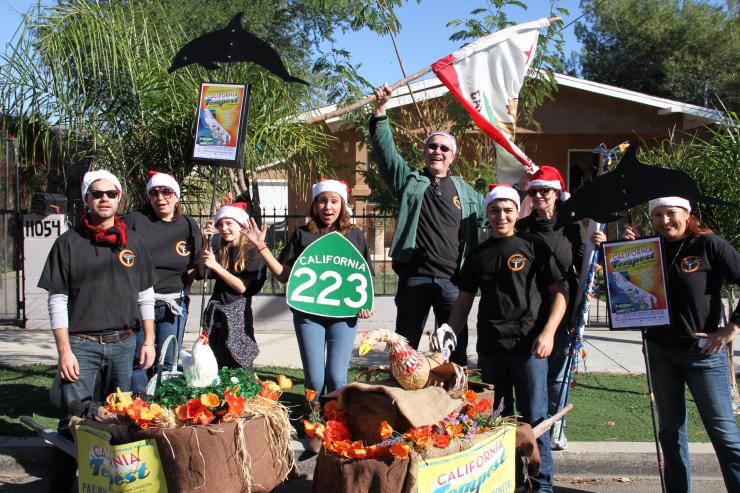 In the intro article to the Colombia series, Carl(os) Roa, a Latinx artist from Philadelphia who made art in Bogotá last year, poses the question “What are the ways in which Colombia’s arts communities are just as fragmented as those in the United States” and shares how uplifting it has been to watch artists in the Bogotanx theatre community adapt to new realities brought on by the pandemic.