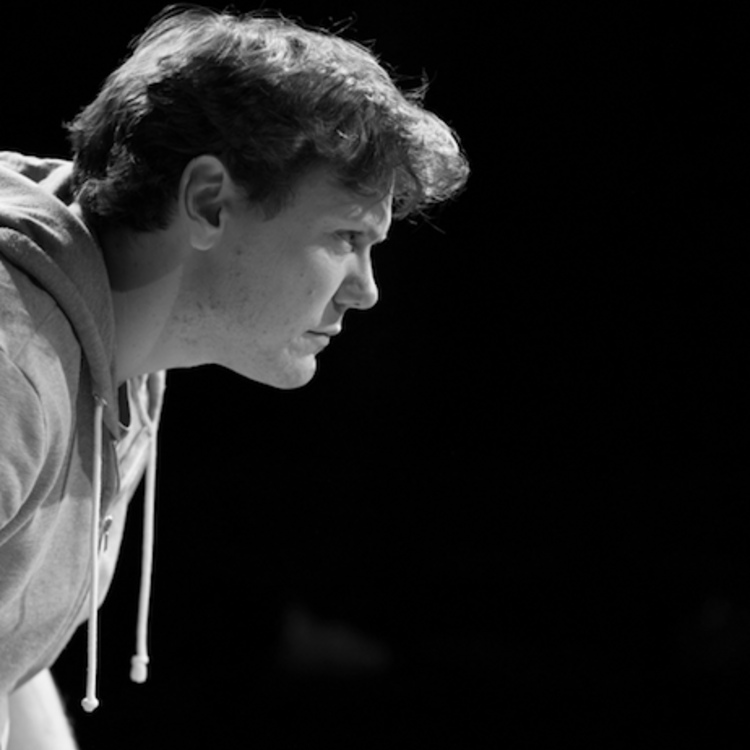 A Guide to Constructing Empathy

I climb a flight of stairs in Chelsea and find myself in a white room. A little kitchen with drinks and snacks for sale, a check-in desk where audience members write their names down, a giant white curtain with the show’s title on it in black letters: Say Something Bunny!

As the performance begins, the curtain is pulled back to reveal a room with a large circular desk in the middle. Individual seats line the back wall. One by one, in the order that we arrived, audience members take their seats. One seat is not better than the next, we are told by the attendant who has checked us in. I grab one of the last seats at the big table, and soon after the performance begins.

A woman (Alison S. M. Kobayashi) enters, welcomes the audience, and explains the performance’s origins: a friend bought a wire recording device from an estate sale, which happened to come with two tapes, and, knowing Kobayashi’s interest in making work from found objects, gave it to her. Kobayashi then instructs the audience to open the transcripts she has created from listening to these recordings hundreds of times, and together we dive into two gatherings of a Jewish family living in New York in the 1950s. We soon learn a young man named David made the recordings, and we begin to hear the voices of his family and their friends. During the performance, we listen to thoughts from those who are long gone, look at census records and clips from old erotic videos, and witness one of the most deeply empathetic performances I have seen in years.

Say Something Bunny!, performed and created by Kobayashi and her co-author Christopher Allen, is an extraordinary work. The recording is simultaneously mundane, as the creator did not capture something traditionally “dramatic,” and amazing, considering how seemingly fateful it was that this recording fell into Kobayashi’s hands. Through incredible research and imagination, Kobayashi attempts to resurrect the lives of the people captured on the recording. Starting with the recording device, Kobayashi uses what she hears to begin her meticulous research to discover the history of David and his family.

But Kobayashi doesn’t limit her research to just the biographical details of these people and their lives, she weaves cultural context and references throughout her dissection to situate the conversations she has studied and recreated. For example, when one of the family members references a song, Jo Stafford’s 1951 “Shrimp Boats,” Kobayashi does a deep dive not only into the song, but also into Mickey Katz’s parody version, “Herring Boats.” In doing so, she works to define the cultural context this Jewish family in the early 1950s lived in.

The videos are ultimately extraordinary in their ordinariness.

It’s through these references that Kobayashi has uncovered specific details about the family. The songs reveal what type of humor family members enjoyed, while also providing a practical clue into when exactly the recordings were made. Kobayashi performs this extremely detailed reading, casually casting audience members as different characters in the recording. The audience members do not have to perform or even read the roles they are assigned, but, rather, Kobayashi uses them as visual markers to help keep track of the members of the family and their friends.

The parts are assigned based on where audience members sit rather than on the gender, age, or race of the people on the recording—I am cast as Julius, a neighbor in his seventies, who only appears in the first act. When Kobayashi assigns the parts and begins to reveal information about the characters, the audience still feels like an audience. But as the piece continues, individuals begin to slyly comment on the people they have been assigned by making faces to other audience members, laughing, and sharing glances. Soon, the boundaries between the audience and the people in the recording begins to fade. As Kobayashi describes each character, I read the attributes as insight into the specific audience member playing the role. It doesn’t matter that Kobayashi is describing a middle-aged woman while pointing to an older man, or a teenaged white boy while talking to a young black woman. I am aware of the performance and the actual person at the same time.

Throughout the performance, Kobayashi includes video and photos she took during the process of creating the piece: of the house of the family on the recording, of their gravestones. She also includes recreations of moments, where we see her in a wig and costume, lip syncing with the recording as it happens. In these moments, Kobayashi explicitly plays with tension between mimesis and mimicry. On the one hand, the performance is mimetic in that she uses traditional theatrical means to become the character in front of the audience’s eyes. On the other hand, the use of the recording works to remind the audience that she is not the people she discusses, but rather just mimicking them.

Kobayashi invites the audience to indulge in believing her representation and to be aware of how she constructs that representation. A particularly memorable moment is over dinner, when one character comments that she did not realize the host was a good cook—a comment the host challenges later in the evening. In drawing the audience’s attention to this moment, Kobayashi demonstrates how simple and seemingly mundane comments reveal hints of insecurities and tensions that exist between the people who were recorded.

Both pieces demonstrate that the mundane can generate something incredibly compelling.

A couple of months after seeing Say Something Bunny! I attended a show that made me think back to Kobayashi’s performance. In the midst of the January festival madness, I sat in a small classroom on the second floor of the Public Theater to see Janek Turkowski’s Margarete. After finding a set of 64 Reels of 8mm film at a flea market in North Germany, Turkoswki built a performance inspired by the images he found and the woman’s life they represented. The films come from an East German woman named Margarete Ruhbe. The videos are ultimately extraordinary in their ordinariness. we view vacations, workplace-sponsored recreational activities, and walking in the woods. Often the videos are simply of landscapes. And as someone with a soft spot for the midcentury communist aesthetics, it was a thrill to see the clothes, the cars, the buildings as they were in the ’60s.

There were many parallels in the two performances: a performer making a solo piece inspired by the documents of an unknown person, a performer trying to reconstruct someone else’s life, a small audience setup in an unusual configuration, to name a few. And while it’s tempting to compare the two and decide which one is a more successful performance, I found that in thinking about them in tandem, I began to understand something deeper about the two pieces.

Perhaps the biggest and most important difference between the two pieces is the medium of the source material. Kobayashi’s performance relies on sound, while Turkowski’s depends on image. The two mediums propel the performances in different directions. Kobayashi focuses primarily on the characters who populate the recording, while Turkowski considers the world in which these films take place. The path each production pursues works in their favor. Kobayashi’s interest in character allows Bunny! to become a ghost story, where the voices of the past come to haunt the audience. In Turkowski’s piece, the images begin to create a portrait of a life in the lost world of the Eastern Bloc.

One might argue that there is something incredibly invasive about these performances, as the performers do not seem concerned about whether they have the right to make a piece that so deeply involves someone else’s life. But in Kobayashi and Turkowski’s hands, this question almost feels irrelevant. The performances are so gentle and clearly informed by curiosity and generosity that to suggest otherwise feels inappropriate. Both performers demonstrate actual interest in their subjects, and both eventually involve an encounter with the person they are making work about. Just as importantly, both pieces demonstrate that the mundane can generate something incredibly compelling.

Ultimately, Say Something Bunny! and Margarete demonstrate empathy. Kobayashi literalizes the imaginative leaps that empathy requires with her costume changes and video recreations, while Turkowski guides the audience through the process of trying to imagine Margarete’s life. Anne Bogart describes the theatre as a gym for the soul, where both artists and audiences practice empathy, but what does it mean to empathize? These two shows remind the audience that empathy requires work and that “to empathize” is an action, not simply some magical feeling that appears. Empathy requires listening, looking out, researching, and imagining. But just because empathy requires work doesn’t make it any less valuable. After all, the fruits of such labor sit in front of each audience when they attend these performances, and we are lucky that artists like Kobayashi and Turkowski share them with us, and hopefully, to inspire more artists to follow their lead and rigor.