A panel about Arab theatre, political theatre, dramaturgy and the contributions of women artists, among other topics. 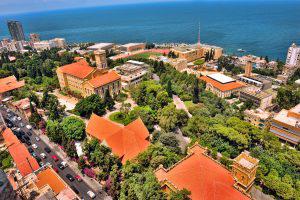 On the occasion of a new exchange partnership between the Ph.D. Program in Theatre and Performance, the Segal Center, and the Theatre Initiative at the American University of Beirut (AUB) initiated by the 2017 respective visits of The Graduate Center CUNY President Chase Robinson in Beirut and AUB President Fadlo R. Khuri in New York and in close collaboration with Provost Joy Connolly—we welcome Lebanese theatre artist and AUB Assistant Professor of Theatre Sahar Assaf to celebrate the new collaboration. Funding provided by the offices of the President and Provost, The Graduate Center CUNY.

After a presentation by Assaf on contemporary theatre in Lebanon and a reading of an excerpt from No Demand No Supply: A Rereading of Lebanon’s 2016 Sex Trafficking Scandal, written by Sahar Assaf and produced by Joy Sarah Arab, there was a panel with Assaf, Marvin Carlson, Peter Eckersall and others that touched on questions of Arab theatre, political theatre, dramaturgy and the contributions of women artists, among other topics.

Founded in 1866, the American University of Beirut bases its educational philosophy, standards, and practices on the American liberal arts model of higher education. A teaching-centered research university, AUB has around 800 instructional faculty and a student body of around 8,000 students. The University encourages freedom of thought and expression and seeks to graduate men and women committed to creative and critical thinking, life-long learning, personal integrity, civic responsibility, and leadership.

The University, which was granted institutional accreditation in June 2004 by the Commission on Higher Education of the Middle States Association of Colleges and Schools in the United States and reaffirmed in 2016, includes six faculties: Agricultural and Food Sciences, Arts and Sciences, Engineering and Architecture, Health Sciences, Medicine (which includes the Rafic Hariri School of Nursing), and the Suliman S. Olayan School of Business.

AUB currently offers more than 130 bachelors, masters, MD, and Ph.D. degree programs. The University became co-educational in 1922; its student body is 50 percent male and 50 percent female. The language of instruction is English (except for courses in the Arabic Department and other language courses).

The Theater Initiative at AUB is an interdisciplinary group of faculty, students, and artists who promote courses in directing, acting, playwriting, theater history and the performing arts and facilitate plays, theater research and theatrical projects at AUB, in the Middle East and internationally.

One of the principal goals of the Theater Initiative is to place theatrical performance and study at the center of intellectual life at AUB and in the Middle East, bringing together people from all walks of life and students and faculty from literature, arts, architecture, social sciences, science, business, medicine and other disciplines. The AUB Theater Initiative is directed by Robert Myers and Sahar Assaf.

Sahar Assaf is an actress, stage director and Assistant Professor of Theatre at the American University of Beirut. She recently co-established the AUB Theatre Initiative with playwright and English Professor Robert Myers under which she co-translated,
co-directed, and starred in Shakespeare’s King Lear at al-Madina Theatre in Beirut, the first production of Shakespeare in Lebanese colloquial Arabic. She is a member of Lincoln Center Director’s Lab (2014), a member of Directors Lab North in Toronto (2017) and a Fulbright alumnus with an MA in Theatre Studies from Central Washington University.

Robert Myers (www.robert-myers.com) is a Professor of English and Creative Writing, a director of AUB’s Theatre Initiative and a former director of AUB’s Center for American Studies (CASAR). He is a playwright and cultural historian whose of interests include modern and contemporary literature and theater from the U.S., Latin America, Europe and the Arab world. He has written over a dozen plays including Mesopotamia, about Gertrude Bell, presented at Yale with Kathleen Chalfant, and Unmanned, produced at Metta Theater in Taos and Santa Fe, and adapted for BBC’s Radio 4 as Drone Pilots. With Nada Saab he has translated over a half dozen plays from Arabic including Baghdadi Bath, by Jawad Al Assadi (produced at LaMama); The Dictator, by ‘Issam Mahfouz (produced at the Between the Seas festival in New York,); and Rituals of Signs and Transformations, by Sa’dallah Wannous (produced at Babel Theater in Beirut). He and Nada Saab co-edited and co-translated Sentence to Hope, a Wannous reader, for Yale University Press and are completing Contemporary Levantine Political Theatre, an anthology and critical edition for Brill-Leiden. He has a PhD in literature from Yale, with a focus on Spanish, Portuguese, and Hispano-Arabic literatures.

How R.Evolución Latina is Reinventing the Bard
Jose
Solís
Essay

How R.Evolución Latina is Reinventing the Bard

Jose Solís explores R.Evolución Latina’s production To Be or Not to Be, the culminating project of the company’s spring 2018 workshop, which brought Latinx artists from all over to New York to create a piece based on Shakespeare’s texts.

For the last few years, professor Catherine Coray has been helping create collaboration opportunities for theatre artists in Arab countries and the Americas. Arab Voices: Stories of Palestine is the most recent iteration, and has taken place in New York, Abu Dhabi, and Beirut.