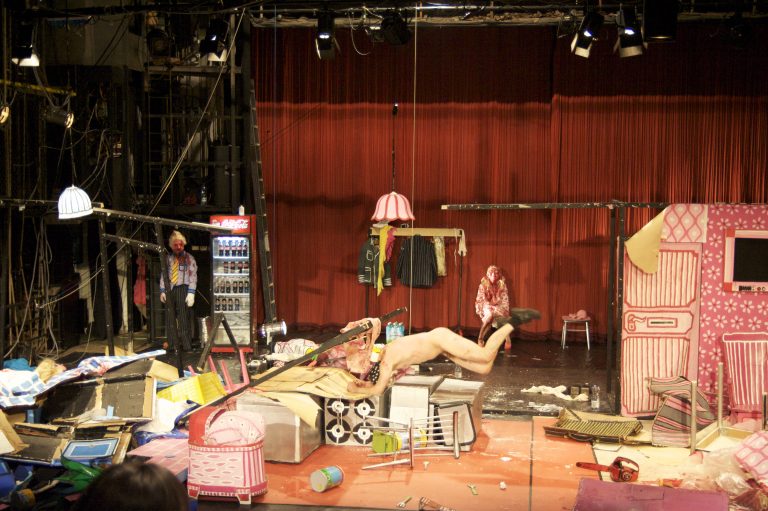 Video on-demand not available for this event.

The Segal Center is honored to welcome the notorious Norwegian/German theatre duo Vegard Vinge and Ida Müller in their first visit to the U.S. Throughout the last decade, Vinge and Müller have managed to scandalize European audiences through gothic somberness and seemingly naïve aesthetics. They often indulge in transgressive improvisation, body fluids, violence, masks, and excessive make-up to create a new and ironically monstrous Total-Work-of-Art.

Their shocking, delightful, and thoughtful defiling of the Ibsen corpus provided fresh perspectives and commentary on these classic texts, while creating an outrageously original theatre language. Their maximalist and extremist aesthetics have earned them multiple awards and invitations to Europe’s most prestigious stages, including their former artistic home, The Volksbühne Berlin. Throughout the day, Vinge and Müller will personally introduce premiere screenings of excerpts from all their work, including a new, widely anticipated film project.

Moderator:
Andrew Friedman is an assistant professor of theatre history at Ball State University and received his PhD in Theatre from the CUNY Graduate Center.  His articles on contemporary performance appear in Theatre Journal, Theater, Modernism/modernity, European Stages, Ibsen News and Comment, and the forthcoming collection, Postdramatic Theatre and Form. He is currently completing a manuscript about Vegard Vinge and Ida Müller’s Ibsen-Saga.