Jamaican Roots Theatre, Then and Now

Jamaican Roots Theatre, Then and Now
Emerging from the stylized staging traditions of the Little Theatre Movement’s Pantomime, Jamaican Roots Theatre is a popular genre with high commercial appeal that enjoys long runs and a regular touring schedule throughout the Caribbean and its Diaspora. Jamaican Roots Theatre utilizes slapstick comedy and pop-culture commentary to centralize the proletariat as hero/heroine. It is also a repository of the Jamaican language and a companion to Jamaican dancehall culture.

Two of the most popular Roots Theatre actors will engage in a lively and profound conversation on the genesis of the genre and visions for its future developments. This conversation will be followed by a live audience Q&A segment with the speakers.

Keith 'Shebada' Ramsay is a Jamaican actor and comedian, best known for his appearances in 'roots' plays. He is often referred to as simply 'Shebada' a nickname given to him by father. In 2006, he entered the first season of the CVM TV (later, Television of Jamaica) comedian elimination show, 'Comedy Buss', where he placed third. From there, he was recruited by Stages Productions to appear in the roots play ‘Bashment Granny’. In his career as an actor Shebada has done over 20 plays to include 'De Weddin Scamma', 'Krosses', 'Clash', 'Chixta', 'Set Up' and 'Ghettout'. 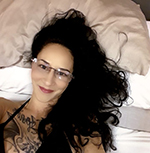 Born in Kingston Jamaica, Maylynne Lowe began ballet at 4 years old and trained for over 12 years with Norma Spence and the Rowe Ballet Co. She transitioned into musical theatre as a teenager in productions such as Cats and Alladin with the Jamaica Musical Theatre Co. and Applause for the performing arts with Cathy Levy and the LIttle People co. She studied acting and completed the summer program at AADA in New York City and then went on to Emerson College in Boston Mass. to major in acting. On her return home, she landed the role of Tanya Blackburn on Jamaica's longest running soap opera, royal Palm Estate which she played for over ten years. she has worked with all major producers in her industry such as Father Holung and Friends, Oliver Samuels, Jambiz Theatre, Dahlia Harris Productions, Shebada and Stages Productions, and Basil Dawkins Productions to name a few. In 2010 She won Best Actress at the ITI Actor Boy Awards in Jamaica for her role as Annie Palmer in The White Witch of Rosehall. Her latest role was Basil Dawkin's Pressure Drop at The Little Little Theatre.