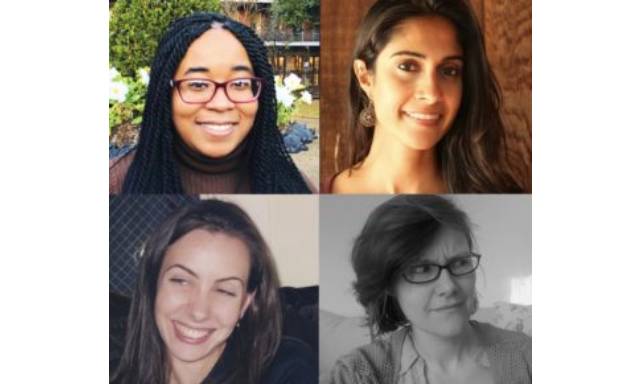 Submit questions during the livestream to translatingthefuture2020@gmail.com

Literary translation was once a lonely profession but translators no longer need toil in isolation. All manner of communities have sprung up to support translators and literature in translation. These speakers have founded blogs, publications, and databases, as well as collectives and reading series — both virtual and local — to fill the gaps and meet the needs of translators, editors, booksellers, and readers.

M Lynx Qualey is founding editor of the translation-community website ArabLit, which won a 2017 London Book Fair prize. The project has since expanded to ArabKidLitNow!, the ArabLit Story Prize, and the ArabLit Quarterly magazine. MLQ is also co-host of the popular BULAQ podcast, and she writes regularly for a variety of publications. Her translation Sonia Nimr's Wondrous Journeys in Amazing Lands is forthcoming from Interlink this fall.

Shuchi Saraswat is a writer, editor, and reading series director. She's worked at the independent bookstore, Brookline Booksmith, for the past nine years and in 2018 she founded the Transnational Literature Series, which focuses on themes of migration, the intersection of politics and literature, and works in translation. In 2019, she served as a co-judge for the National Book Award in Translated Literature. She is a nonfiction editor at the literary journal AGNI, where she will be co-editing a portfolio of translated literature with Jennifer Kwon Dobbs for the Fall 2021 issue. She currently lives in Boston.

Allison Markin Powell has been awarded grants from English PEN and the NEA, and the 2020 PEN America Translation Prize for The Ten Loves of Nishino by Hiromi Kawakaami. Her other translations include works by Osamu Dazai, Kanako Nishi, and Fuminori Nakamura. She was the guest editor for the first Japan issue of Words Without Borders, served as cochair of the PEN America Translation Committee and currently represents the committee on PEN’s Board of Trustees, and she maintains the database Japanese Literature in English.

Paige Aniyah Morris is a writer and translator from Jersey City, NJ, currently based in Seoul, South Korea. She holds BAs in Ethnic Studies and Literary Arts from Brown University and an MFA in Creative Writing from Rutgers University-Newark. The recipient of awards from the Fulbright Program and the American Literary Translators Association, her writing and translations have appeared or are forthcoming in The Margins,The Rumpus, Strange Horizons, Nabillera, Necessary Fiction, and more. With Eugene Lee, Gisele Pineda, and Spencer Lee Lenfield, she co-founded Disoriented, a platform to generate discussions about how social identities translate between Asia and the US.

About this Conference and Conversation Series
Translating the Future launched with weekly hour-long online conversations with renowned translators throughout the late spring and summer and will culminate in late September with several large-scale programs, including a symposium among Olga Tokarczuk's translators into languages including English, Japanese, Hindi, and more.