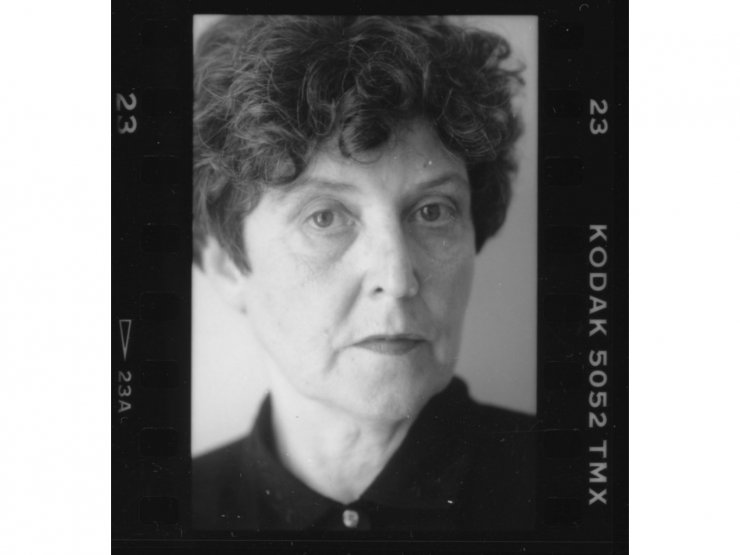 The Latinx Theatre Commons presented the María Irene Fornés Institute Symposium livestreamed on the global, commons-based peer-produced HowlRound TV network at howlround.tv on Friday 13 April and Saturday 14 April 2018. Follow @HowlRound on Twitter for updates, and use #howlround and #FornesLTC18.

María Irene Fornés was a luminary of the 1960s Off-Off Broadway scene, as both a playwright and a director. Her works include Fefu and Her Friends, Mud, and The Conduct of Life. She is a nine-time Obie winner, including an Obie for Sustained Achievement, and a Pulitzer Prize finalist for her play, And What of the Night, She is a beloved and highly influential teacher, whose pedagogy with the INTAR Hispanic Playwrights-in-Residence Lab transformed contemporary theatre.

From American Theatre magazine: “Maria Irene Fornes’s work creates worlds onstage, not just through her play’s texts but through her acutely tuned sense of design. Long recognized as one of the most influential playwrights and teachers of the 20th century, Fornes designed her own productions with a rigor that had few peers; Richard Foreman might be her only equal in terms of a total theatre artistry. As director of her own work, Fornes exerted control over the entire mise en scène, creating a style of architecture, lighting, and costuming onstage that provided alternately imposing or cramped environments for her meticulous staging and language. Fornes’s fully articulated design provided the canvas for some of the most ambitious plays of her oeuvre.”

Please join us for a conversation with Migdalia Cruz (THE BOOK OF MIAOU: Don’t Drink Everything Your Mother Pours You) and Mac Wellman (FNU LNU), award-winning playwrights, whose works comprise I am in 5th grade, you are in Kindergarten: Two short plays in honor of María Irene Fornés. Cruz and Wellman will discuss how these plays are inspired by Fornés, as well as reflect on their longstanding and influential work as playwriting teachers. The conversation will be moderated by Anne García-Romero, Associate Professor of Theater, University of Notre Dame.

Join us for the launch of the 2018 LTC María Irene Fornés Institute Symposium, a day of vigorous Fornés-inspired creativity, conversation, and conviviality. In the spirit of a family reunion, this event will gather Irene's students and collaborators, as well as artists and scholars who have been inspired by her, to celebrate her living legacy and collaboratively document her enduring impact.

There will be news from recent visits with la maestra herself and updates on current manifestations of her work, both in production, pedagogy, and scholarship. The floor will open to saludos from her students, collaborators, and friends, and Princeton scholar Jill Dolan will share a statement about the remarkable influence of Fornés on contemporary theatre making.

Olga Sanchez S. will serve as MC for this event which is proudly produced in partnership with Princeton University's Lewis Center for the Arts, along with other events happening April 12-15.

This session will wrap up first María Irene Fornés Institute Symposium, a day of vigorous Fornés-inspired creativity, conversation, and conviviality. In the spirit of a family reunion, this event will gather Irene's students and collaborators, as well as artists and scholars who have been inspired by her, to celebrate her living legacy and collaboratively document her enduring impact.

The Closing Ceremony will include a report out of the experiences of the day, including the sessions, cafecitos, performances and installations. There will be announcements about upcoming initiatives, and an opportunity to set intentions for the future. Playwright Migdalia Cruz will present the final offering of this day-long celebration in honor of la maestro, María Irene Fornés.

Olga Sanchez S. will serve as MC for this event which is proudly produced in partnership with Princeton University’s Lewis Center for the Arts, along with other events happening April 12-15.

About HowlRound TV
HowlRound TV is a global, commons-based peer produced, open access livestreaming and video archive project stewarded by the nonprofit HowlRound. HowlRound TV is a free and shared resource for live conversations and performances relevant to the world's performing arts and cultural fields. Its mission is to break geographic isolation, promote resource sharing, and to develop our knowledge commons collectively. Participate in a community of peer organizations revolutionizing the flow of information, knowledge, and access in our field by becoming a producer and co-producing with us. Learn more by going to our participate page. For any other queries, email [email protected], or call Vijay Mathew at +1 917.686.3185 Signal/WhatsApp. View the video archive of past events.

A Report on the LTC Miami in Motion Convening