Produced With
The Lab for Global Performance and Politics 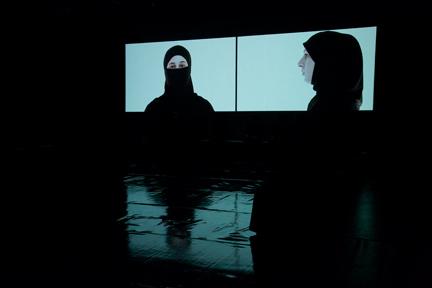 Re-interpreted by a group of women forced to flee their homes in Syria who now live as refugees in Amman, Syria: The Trojan Women weaves the individual experiences of these women in a 21st-century conflict into Euripides’ 2500 year-old text. After premiering in December 2013 in Amman, Jordan to international acclaim, Georgetown was scheduled to host these extraordinary women (Sept. 18-20), under the direction of leading Syrian director Omar Abu Saada, in their first North American performances.

Despite many months of constant efforts and extraordinary advocacy on the women's behalf from a wide range of top officials, ambassadors, and legal experts, the US Bureau of Consular Affairs in Amman has denied the visa applications of the women performers under section 214b of the Immigrant and Nationality Act, failure to demonstrate non-immigrant intent (despite the women's deep ties to their children and young families in Amman).

This one-night-only event on September 19 will include live discussion with the Syrian refugee women who make up the cast (via live-stream from Amman), as well as:

About HowlRound TV
HowlRound TV is a global, commons-based peer produced, open access livestreaming and video archive project stewarded by HowlRound, a knowledge commons by and for the theatre, arts, and cultural community. The channel is at howlround.tv and is a free and shared resource for live events and performances relevant to the world's live arts fields. Its mission is to break geographic isolation, promote resource sharing, and to develop our knowledge commons collectively. Follow and use hashtag #howlround in Twitter to participate in a community of peers revolutionizing the flow of information, knowledge, and access in our field. Our community uses the Creative Commons Attribution 4.0 International License (CC BY 4.0). You can become a producer and co-produce with us. Learn more by going to our participate page. For any other queries, contact @HowlRound on Twitter, email [email protected], or call Vijay Mathew at +1 917.686.3185 Signal/WhatsApp. View the video archive of past events.

This is a wonderful project. Is there any updated information of where it is progressing?

Derek Goldman offers an overview of the production of Syria: The Trojan Women.

Storytelling as an Act of Survival
Lama
El Homaïssi
Essay

Lama El Homaïssi reflects on her experience working with American Repertory Theater on their musical We Live in Cairo, diving into representation in storytelling, the oral Hakawati tradition, and more.

An Artist Becomes an Advocate

Jessica Litwak, artistic director of the H.E.A.T Collective, explores the growing field of artist rights and safety, and talks about her dedication to “art of service,” the work that serves communities by facilitating creative personal and social change.