I recently sat down with Halley Feiffer to talk about the Atlantic Theatre Company’s production of her play I’m Gonna Pray for You So Hard. At the time we spoke, I had seen the play twice—a July 2014 reading at the O’Neill National Playwrights Conference while I was in Waterford as a 2014 National Critics Institute fellow, and the first January 7, 2015 preview of the Atlantic production. I had also read several versions of the script.[caption] 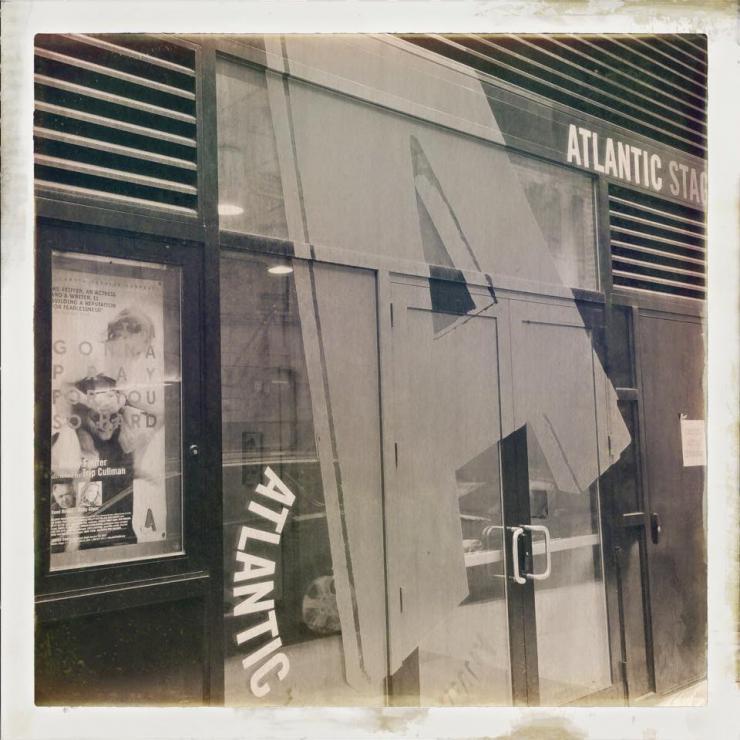 Feiffer, daughter of playwright, cartoonist, and memoirist Jules Feiffer and writer Jenny Allen, credits a program started by Stephen Sondheim as a key step in her own development as a playwright. Young Playwrights, Inc. has programs and several national competitions for playwrights between fourteen and eighteen years old and Feiffer was in one of the first groups of national winners. Feiffer enthuses about how the program treats young artists (“I love them. That [program] is why I’m a playwright. They change lives.”).

I’m Gonna Pray for You So Hard is about Ella (Betty Gilpin), a young adult actor and writer, and her playwright father David (Reed Birney). The play spans five years and two opening nights, and features substance abuse, plenty of familial debate, and one attempt at reconciliation. The play has changed in intriguing ways over the past few years—shifting from a three-hander to a two-hander, from a dying to a living father, from the passage of months to years between the two acts. I asked about this evolution, and what I learned from the open and charming Feiffer is that she listens to her collaborators and, always, the best idea wins.[caption] 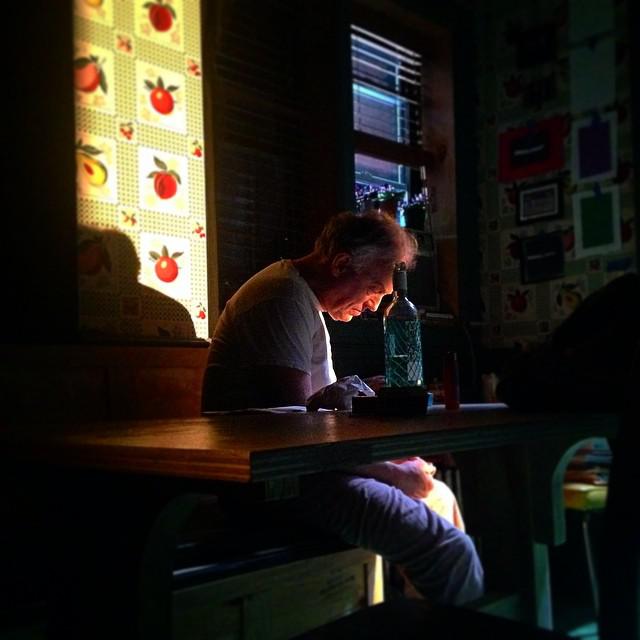 Happy Accidents and Baroque
The first act of I’m Gonna Pray for You So Hard was written during Feiffer’s 2011 run on Broadway in the David Cromer revival of The House of Blue Leaves. The second act, the initial version that included a third character, developed a bit later.

I wrote the second act of the play in one sitting after seeing the revival of Nilaja Sun's No Child... at the Barrow Street Theatre on a dark night during the run of The House of Blue Leaves. I was so blown away by her writing and performance that I felt almost a compulsion to go home and write. That's why I set the second act in a black box—I always imagined it looking like the Barrow Street.

The play is in part a testament to the positive impact of development programs. Feiffer notes:

In some versions of the play, the offstage mom had a more extended role in the first act. There was a whole section where the daughter and mother have a prolonged verbal and somewhat physical fight. Feiffer reflects that a lot of this interaction was cut at the O’Neill. “We were recording it. It was kind of a happy accident. The audio recording sounded bad, and we wondered: what if we just cut this. And oh my god, it was so much better.”

I wrote the second act of the play in one sitting after seeing the revival of Nilaja Sun's No Child... at the Barrow Street Theatre... I was so blown away by her writing and performance that I felt almost a compulsion to go home and write. That's why I set the second act in a black box—I always imagined it looking like the Barrow Street.

Feiffer is happy in a world of heightened truth.

I kept getting notes from the beginning. ‘You have this story that is heightened and is stylized but ultimately has a truthful core that I think a lot of people will be moved by. And you take it into this baroque place with him dying or with her shoving a piece of glass in her hand. Then we stop relating to it or being moved by it, and we just get turned off because it’s so gruesome.’ I’m still working that out. I love that kind of stuff in theater. I love Adam Rapp. I love The Amoralists. I love seeing people urinating and pooping in each other’s faces and throwing up and bleeding all over the place. I find that very exciting if it’s for a purpose that I can understand in the play. But I also want to tell the best story I can.

Addiction is Everything
Substances—drugs and alcohol—dominate the characters of the play. In the first act, Ella and David equally indulge and chastise the off-stage mother who tells them to pack it in and go to bed. In the second act, a several-years sober David comes to make amends with Ella, who has achieved some success and is actively using multiple substances. Those familiar with the dynamics of use and abuse will see Feiffer’s genuine desire to honor the struggle.

It makes me sad that anyone has to deal with it, but I’m happy to hear that it feels accurate, because that’s important to me... It’s scary when a person is drinking himself or herself to death—it warps your mind and your actions. You treat other people like they’re nothing because they are nothing to you, because your addiction is everything. That’s something I was trying to capture with this play.

While addiction and accompanying monstrous behavior by both father and daughter mark this play, Feiffer has crafted sequences that underscore David’s unconditional love for Ella. “He really does love his daughter. At the O’Neill I added a speech about fatherhood. Because I think he really does want to be a good father.”

Finding Her Voice and Waiting for Reviews
Feiffer has summarized the plot of her play for several years as “the story of Ella, a precocious and fiercely competitive actress whose sole aim is making her famous playwright father proud—that is aside from getting famous herself.” I wondered whether the first act felt less like competition and more as a young woman finding her voice, the young performer trying to figure out her position. Ella ultimately removes herself from the competition for the role of Nina she covets in a Seagull production. This first act Ella feels more like a young person not quite standing in her own power. Feiffer sees Ella as finding and expressing her inner competitive soul throughout the play, and gives an example of an exchange early in the first act, when Ella and David are cracking wise at the expense of the pretty young actress who beat out Ella for the role of Nina.

David: I mean, any director worth his salt finds that kind of actress repugnant.

And the way that Betty (Ella) is playing it is kind of genius, where she’s not like ‘I hope so I hope so’ wistfully, but ‘I hope so I hope so’ with determination. We’re trying to weave in those moments where we see who she becomes in the second act. My understanding is that she is competitive, she’s desperately insecure, and has no self-esteem so she can’t really rise to the top until she kills her father in her mind and become essentially a different person.

In the second act, our now angry and addicted Ella is waiting for reviews for her one-woman show. Feiffer “added a line to her agent who keeps calling and asking where are you, you have to get to the party. And she says: ‘Well, what the fuck are they gonna do? Leave the Opening Night Party before I show up? I’m the writer, director, and only actor in the play.’” David, now in recovery, returns to make amends to Ella—all cleaned up and bearing flowers, an inspiration Feiffer credits to Birney’s work developing the character of David at the O’Neill. Ella rebuffs  these earnest though late-in-the-game paternal efforts through silence and a particular way of disposing of a bottle of wine. Her actions make the final scenes all the more harrowing.[caption] 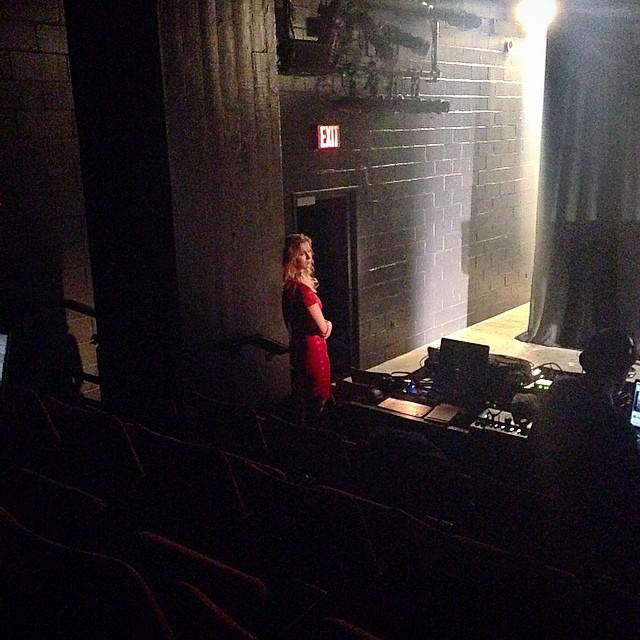 I always feel that there’s more work to be done; it can always be better...  I have friends who are playwrights who don’t really rewrite very much and I can’t understand that. For me all the good writing happens in rewriting over and over.

Biography, Writing, and Rewriting
Feiffer expresses disinterest when asked about the possible annotations that writers might do when reviewing this play, the famous-father-famous-daughter-both-writers kinds of comparisons. “I try to address that in the play. In the end, I feel like I want it to just stand on its own as a play.” She draws upon the example of O’Neill’s use of his own family in his dramatic writing.

I feel like Long Day’s Journey into Night is just a great play and I don’t really actually care how much that was like Eugene O’Neill’s family. For me that is just a beautiful piece of writing. For me, as a reader, I’m not terribly interested in the backstory or the biography of the writer. I just want to look at it as a piece of writing. All I can do is just write the best play that I can. And I feel like that’s what I’ve been doing.

Feiffer notes all the choices that got her to this point with her creation. “All those choices you go back and forth on, you just have to pick one and go from your gut and hope it’s the better one.  But I feel it’s the closest to being what it wants to be right now than it’s ever been.”[caption] 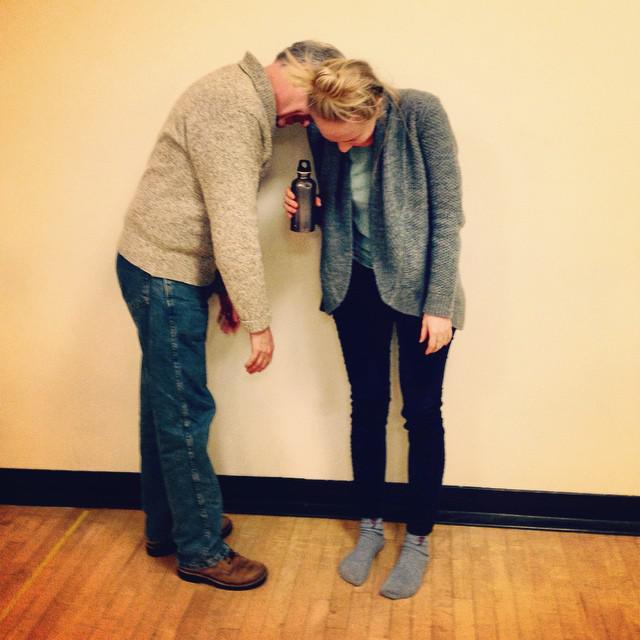 The work is unending and she’s all ears. “I always feel that there’s more work to be done; it can always be better...  I have friends who are playwrights who don’t really rewrite very much and I can’t understand that. For me all the good writing happens in rewriting over and over.”

Using the production of Ken Urban’s play A Sense of an Ending to launch the conversation, theatre  artists Adrienne Campbell-Holt, Gregg Mozgala, A. Rey Pamatmat,  Mfoniso Udofia, and Ken Urban talk about representation on stage.