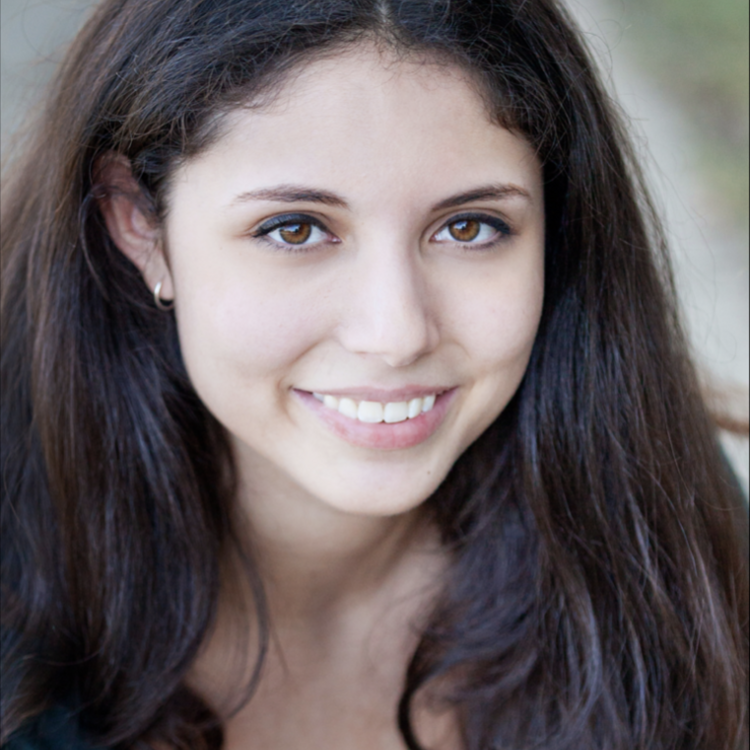 Harnessing the Combined Power of Theatre and TV

“Put down your phone and live.”

Hearing this phrase is inevitable for a Gen Z child like me and being confronted with media on the subject is even more so. Countless plays and films loudly preach about kids these days being too dependent on technology, but they often fail to go deeper. Questions like why generations of people are so dependent on tech, what our lives are like without it, and what we try to gain from it are typically ignored.

Chicago-based Manual Cinema’s production of The End of TV offers long-awaited answers to these questions through its impeccable combination of two mediums: theatre and TV. 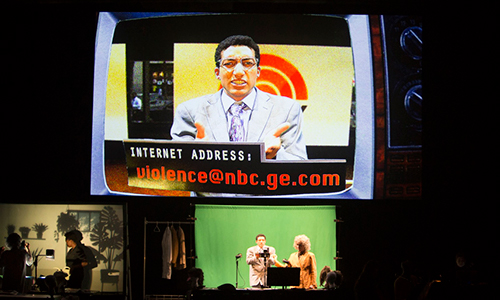 These two forms of “live” exist alongside each other, each one using its strengths to tell a story of the struggle to find life’s meaning—one that is separate from the media so deeply ingrained in our society.

Hosted by ArtsEmerson in Boston in January 2019, The End of TV is described as “a quest for connection amid the static.” It tells the story of two people in the 1990s: Flo, an elderly woman living with dementia who is addicted to the QVC home shopping channel, and Louise, a former auto plant worker who meets Flo after beginning a job at Meals on Wheels. The two form an unlikely bond and impact each other’s lives in ways neither they nor the audience expect.

With the help of a blue screen, an overhead projector, a screen above the cast, and a big library of paper cutouts and puppets, director/storyboard artist, Julia VanArsdale Miller, pairs live theatre and live television to create a unique mixed-media experience that speaks to its audience in a profound way. Live theatre happens when performers stand on stage in profile, holding two-dimensional cutouts as props and acting in front of the projector. As for live television, the entire production is projected onto the screen above the actors, accompanied by puppets and slides moved by the actors themselves. These puppets, designed by Lizi Breit, create entirely new characters and settings, but only have a physical presence on screen.

Live television is best used to portray the cable-fueled fantasies of our leads. The way Flo interacts with her TV is immersive: after ordering another new knickknack from the QVC channel, she gets sucked into her television set and goes for drives in the mountains with her daughter and the Jolly Green Giant. The drives are decidedly more colorful than her reality, overshadowing the onstage palette of black, white, and blue with yellow, orange, and green. The sound is also subject to substitution; QVC broadcast audio is muted and replaced by the sounds of a five-piece band. Songs like “Finite Color” and “Reflections in a Hubcap” are beautiful but have an unsettling, slightly uncanny quality to them, which are reflective of the world in which they exist. The music belongs here, but it doesn’t belong in the real world. Nor does the Jolly Green Giant, who is nothing more than a slide on a screen. Flo is later brought back to reality the same way she escapes it—in the middle of a moment and with no warning. She is left to silently crawl back to her house and disregard the foreclosure notice on her door.

Our leads are left with the same things we face after putting down our phones: no escapism, no companionship, no joy. Only solitude.

For Louise, TV shows and radio broadcasts trigger flashbacks to a time when her backyard was in bloom and her father was present. Such flashbacks are given a sepia coloring and a score that, while barely different than previous tracks in terms of structure, is much more musical. Overall, her mindscape reads as more organic than Flo’s, because her memories are derived from the life she lives and has lived. But the flowers and vegetables growing in her garden aren’t really there. There shouldn’t be any music to begin with. These sequences are still just memories, and they can only serve as a brief distraction from the reality she must face below the projector. 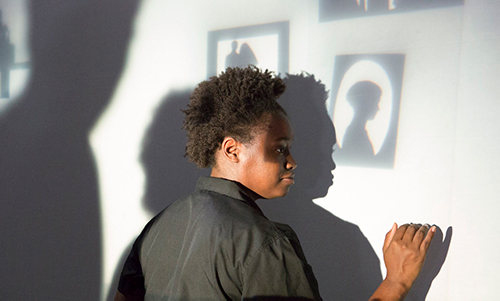 When the characters are going through their daily routine, VanArsdale Miller uses live theatre to communicate the physical world. What you see is what you get, and there isn’t much to see. The colors from the TV world are cooled or removed altogether. Sounds only come from the surroundings—a car engine revving, a doorbell ringing, a sitcom laugh track. Projector slides and puppets, which at one point made mountains, are almost exclusively used to communicate first-person perspective with the shot-reverse-shot technique. Flo opens a new package that arrives, the contents of which are forgotten moments later. Louise finishes her smoke break and goes back into her house. Our leads are left with the same things we face after putting down our phones: no escapism, no companionship, no joy. Only solitude.

Then the two meet. For the first time outside the television, two people are interacting for more than a few seconds. Louise quite literally saves Flo’s life and Flo shows Louise kindness through gifts courtesy of QVC. They communicate without words, and they propel each other out of despair. Live TV is now used to look at memories from Flo’s life—the color returns and the music begins to play again. Without aid of tech, the characters find something human. 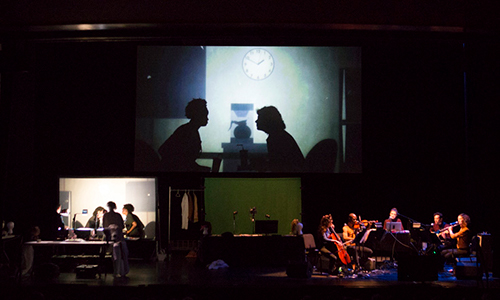 The End of TV is as dense as it is inventive. It tackles themes of addiction, age, isolation, friendship, time, escapism, and media oversaturation, and its immediate nature makes it almost impossible to see those themes until leaving the theatre. But once the theatre has been left, the message becomes clear. Why do Flo and Louise—and, by extension, the audience—depend on technology so heavily? Because they, like us, are scared.

In a world that constantly lets us down, we are afraid to seek a connection that may fail. And so, we turn to the media. We trust its promises of a better life that it has no intention of keeping. We buy things to keep us company. We make friends with food icons, and we imprison ourselves so deeply that we forget how to exist. Manual Cinema harnesses television and theatre to speak to this experience, acknowledging it for what it is and showing its audience that connection can indeed be found amid the static.