How Do Transpeople Talk? Writing Characters Beyond a Gender Binary 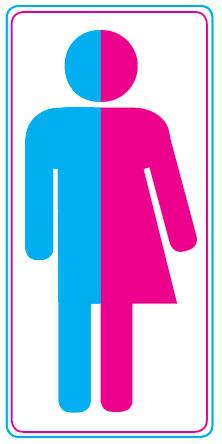 A year and a half ago I received a commission to write a short play. I was working with an ensemble I love: Theatre Four, in New Haven, CT. A group specializing in site-specific performance, they asked me to write a play set in New Haven’s historic Institute Library. In preparation we toured the library together and met with a local historian. We talked about which stories, historic moments, and aspects of the library were most interesting to us. Excited by the library’s abolitionist history, we decided to set the play in the 1840s.

Mid-way through my writing process I realized that, due to casting needs, I would have to change a male role to a female one. No biggie, I thought, but as I began rewriting I shocked myself. On auto-pilot I found myself transforming the character’s bold statements into tentative questions, dividing complete thoughts into fragments, qualifying bold ideas with ums and wells. Horrified, I spent as much time undoing my rewrites as I spent rewriting. Could it be that I was afraid of writing a nineteenth century woman who spoke like (my conception of) a nineteenth century man? How ridiculous! How strange that I lacked the imagination to write a nineteenth century woman who spoke with the confidence of a man, and how embarrassing that I couldn’t commit to this character on the page.

Working on my thesis play in graduate school I got to see a transgender role I’d written realized onstage for the first time: Archer, a genderqueer transmasculine person who expresses a number of genders over the course of the play. The actress who played Archer, an incredibly talented cisgender woman, told me she was stunned by how quiet he was. I was surprised to hear this. Somehow, while writing, I wasn’t conscious of Archer being terribly quiet. Now, hearing my own play, I was deeply aware of his reticence. Archer would sit quietly at the dinner table while his mother and father railed on. Archer would listen intently while his boyfriend told him the whole history of the Ponderosa Pine forest, while his grandmother went on about her neighborly crush. To every character he seemed to be withholding information. But of course, many characters are taciturn. Did Archer come off as quiet because everyone else in the landscape was loquacious? Or did my colleagues find Archer quiet because, recognizing him as a female socialized person, they expected him to apologize for his silence? Was Archer quiet the same way I was? Afraid of slipping into familiar feminine speech patterns that might give others permission to “she” me, confused by the power my words carried in light of my new masculine appearance, trapped between assuming the overbearing male patterns or slipping back into apologetic female ones?

A year and a half ago I held a public reading of my first play with multiple characters who happened to be transwomen. Watching the audience file in, I felt nervous. I felt aware of my privilege as a transmasculine person whose voice might be heard and trusted more quickly than transwomen. I felt afraid that this one story might be understood as a foundational narrative about all transpeople, worried that aspects of these characters would lead to generalizations or stereotypes about transpeople and transwomen. I noticed how few audience members were transwomen and noted again how unwelcoming theatre spaces were to my transfeminine friends. After the reading a transmasculine friend said to me, “I love the play but I have one note: I’ve never met a transwoman who talks so much.”

How much do writers have a responsibility to capture the inequality in our language, and how much do we have a responsibility to shift it? In a world where women (cis or trans) are rarely given much airtime and transpeople of all genders incredibly little, how can our choices to write someone as quiet, talkative, angry, or apologetic reflect a specific individual in context without reinforcing unconscious patterns? Now that I know how deeply stereotypes of language reside in me, how do I write the world I want to see? And how can I do this while also revealing the painful truths of the world I live in?

As artists, we get to choose what an audience sees when they see a trans character. Do they see the character’s preferred gender or the gender assigned at birth? In the theatres that most of us are working in, the vast majority of our audiences are not trans, and in fact, a fair percentage of them may have never known a transperson. How can we show these audiences a trans character and keep them from assuming the character’s assigned gender? How can we create space to reveal the character’s personality without our choices being received as characteristically male or female? We have to use awareness of these automatic assumptions to chart new territory for language and gender. Where better to begin this work than in the theater, where we collude in constructing reality? And who better to begin it with than transpeople—our already gender revolutionary characters? I want to challenge myself, my colleagues and my collaborators to write against assumptions for characters of all genders, and I can’t wait to see where it leads us.

I don't know whether this is useful or not, but the transmen I know have not spoken differently from some of the cis men I know. In my experience--however limited--people speak differently (from me) based on their socioeconomic class (sometimes), their geographical location (sometimes)--but the notion of difference is subjective, right--because my default or my norm is my own constructed frame of reference. If we try to have our characters represent the group they are from, rather than simply being one voice, then we get caught in the trap of having to speak for a group of people and not an individual. In time, more stories equal the range of experience and we are all less limited by expectations. Consciousness and intentionality for a work are important but so is your instinct, your impulses of how a character speaks. I think the best we can do is to write 3-D characters and let audiences catch up to whatever in familiarities we/they encounter.

One way I can think of is to have two or more transmale or two or more transfemale characters in the same play, and make them different from each other, as they would be in real life. Of the two transmen I've known in real life over a course of several years, I only found out one was trans* years after that from Google and the other from an appearance in a transmale magazine, OP. They aren't macho or anything, just regular guys.

I have to say, I disagree with the key assumptions of the article. Take one of the key questions posed near the end: "How can we create space to revel the character's personality with out choices being reviewed as characteristically male or female?" The author spends the entire article railing against gender binary dialogue and then poses their own question in terms of the gender binary.

My gender, my sexuality, my race, my creed, my religion, may all be parts of who I am, but no single part of that is the sum of my identity. However, the author of this article is making gender the sum of this person. In the first example given, where a 19th century male character was written as female, the author was correct in that the two likely would NOT have spoken the same way for a myriad of reasons. COULD they speak the same way? Of course. However, the female version would have to be aware of the societal implications of her assertiveness. They may not stop her, but it would be myopic to suggest they didn't exist.

I haven't read the author's play involving the trans-character, but it is possible the audience for the character to be "quiet" because so many articles involving the cis/trans/etc. dynamics come from organizations/publications with agendas (Jezebel, etc.) that tend to delight in abrasive shock factor. The trans person may have seemed quiet because they didn't scream "FUCK YOUR GENDER PRONOUNS YOU DO NOT DEFINE ME YOU CIS BASTARDS"

Great article MJ. Thanks! It really made me think and has inspired me to keep thinking about the provocations you have so intelligently offered.

MJ, these are exciting questions. And I am so glad you are asking them. I just received an MCAF grant for my transgender performance project, which was sparked by my work last year with STARS clients at Bailey House. Last year we ended up doing a sort of documentary/talk show, taking questions and answers from the transwomen in the audience about many aspects of trans life. I augmented that with audio clips from the many interviews I conducted with them over a 2-month period, and with video clips from trans public figures. I'm in the process of deciding what form the project will take this year, and have been considering writing a play for my transwomen group, by creating a loose structure and having them improvise the scenes. If they behave in that circumstance like they did during my work with them last year, they will be voluble, opinionated, funny, frank and powerful. Of the five transwomen participating last year, two were very outspoken, two were intermittently outspoken, and one was only occasionally outspoken. None were what I would call quiet. I say all this in what I know is a very partial and insufficient answer to your very good questions about how trans people talk. (no transmen, for instance, were in my group) I find it totally fascinating to think about how our unnoticed prejudices can show up in dialogue. I'm going to be thinking about that as I work. Thank you for this excellent writing on this topic. I hope you can come to see the final product of our work, which will be featured in my 2015 Left Out Festival at Stage Left Studio in April.

The Art in the Room
P.
Carl
Taylor
Mac
Essay

The Art in the Room