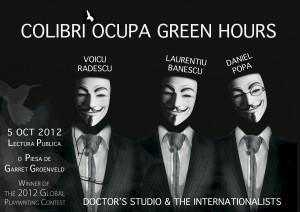 Second Presentation: Mexico City, Mexico—September 26 & 27, 2012
The second presentation of The Hummingbirds—or as it is called in Spanish, Los Colibríes—took place in Mexico City at the end of September. It was presented by Serres Communes at the Lab Treces space. They used the same translation as was used in Zaragoza, so I was excited to hear the text with a very different audience and see what a very different company and culture would do with it.

I left early Wednesday morning, flew from SFO to LAX, and after a short layover I was on to Mexico City. The leader of Serres Communes, Alfonso Cárcamo, picked me up at my hotel at around 7pm and we walked the few short blocks to the theater.

Unfortunately, that morning, the elevator went out on the building and the space is on the 6th floor, which meant that we (and the audience) had to walk six floors to the space. Boy, am I out of shape. 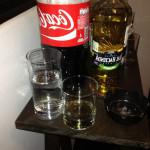 I like how they do readings in Mexico—they serve tequila and beer before, during, and after. It makes conversation much easier.

I was able to watch the tail end of rehearsal and was delighted to see it was going to be performed by two women. I have not seen this combination to date and they were both very strong. They were both dressed quite starkly in black, with severe hair. Diana Lien played ONE and Guadalupe Damien played TWO. I developed actor crushes on both of them. 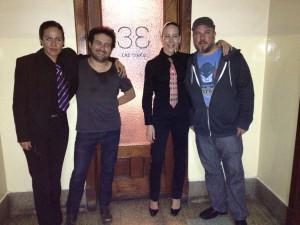 We held the curtain a bit because the elevator was broken, but ended up with a nice full house, and as it started to rain a bit outside they went to work on the first of two presentations.

I don’t speak Spanish, so once again, I did not know the language they were speaking, but knowing the play, it was fascinating to see the audience react in key moments. 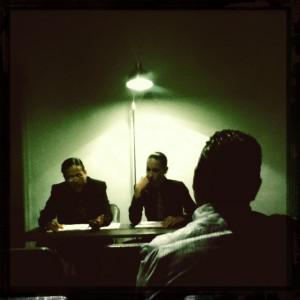 One of the interesting features of this play is how different combinations will allow different subtexts to be played, but the story and meaning of the play will remain unchanged—just given a slightly different subtext. Featuring two women gave the piece a note of empathy that I haven’t seen before. For example, after one particular reveal, ONE hugged TWO, which would never have happened if it were two straight men.

They did a second presentation on Thursday. It was raining quite heavily, so the house was much smaller, but beforehand, the actors both told me they were making some very different choices, and it was great to see them put them into action. Actor crush confirmed.

Featuring two women gave the piece a note of empathy that I haven’t seen before.

After each reading, we had in-depth conversations. There was one company member, Noamy Romo, who was fluent in English and whispered translations in my ear. We talked about:

I found it interesting that a play about unemployment still resonated in a country without an unemployment insurance system. All in all, it was a wonderful trip and we’re now looking at a possible Mexico City production in March, which would be very exciting.

Unfortunately, my luggage enjoyed a longer layover in LAX than I did and didn’t make it to Mexico City with me. I was not able to recover it until Friday morning on the way back to San Francisco. Delta blamed Alaska. Alaska blamed Aero Mexico. And Aero Mexico blamed Delta. It was a good excuse to go shopping, but to keep calm, I kept repeating the line from Elizabeth Bishop’s poem “One Art”: “The art of losing isn’t hard to master;/ so many things seem filled with the intent/ to be lost that their loss is no disaster.”

Updates on Other Presentations
Bucharest, Romania: On Friday, October 5th, the Doctor’s Studio presented a protest presentation in Romanian in support of Green Hours (the first independent theater in Romania) that has been struggling against a take-over of their space by some not so legitimate “business” people.

While I was upset to miss this presentation in person, I will be traveling to Bucharest in November to see the premiere. The cast will tour both Bucharest and all of Romania throughout the next year. It’ll be interesting to see it play in places where the piece’s themes of government oppression will be more relevant than that of unemployment. While I knew the Internationalists would lead to a lot of interesting opportunities, I’ve never thought I would have a production in Romania, much less the first production of a play of mine in another language and in another country.

The Hague, The Netherlands: Unfortunately, due to budget cuts for the arts in the EU, including The Netherlands, the theater space where the presentation in late October was to happen was lost. This is a common story all over Europe and will be a challenge for theater artists to turn to other funding sources (like most Americans must). The director in The Hague, Karina Bes, is applying for additional funding and seeking another space. The hope is to have the presentation happen there around January. This was very disappointing, particularly as I have a lot of family and friends in Holland who were looking forward to seeing the play sooner, rather than later.

Berlin, Germany: There is a possibility of a reading in conjunction with another international theater festival in early November, though this is not firm yet. We’re working towards a production in January. However, the theater we're in conversation with has lost 150,000 Euros in funding from the German Senate; this too is up in the air.

New York, New York: It looks like a reading in New York will happen on December 3rd, location yet to be determined. I’m very excited that my friend, the phenomenal actor Colman Domingo, has agreed to do the reading.

Agree, this opportunity to see your play interpreted by such varied theatre artists seems fascinating, thank you so much for sharing. It's a pity that budget cuts have affected the performance schedule, but it's a reflection of the times we live in.A small correction, Tijuana is a city in Mexico, not a state.Congrats!

How exciting! What an amazing play and what fascinating studies into further productions based on playing with casting. Congrats, Garrett!

Esther Fernández discusses how the emerging field of transnational studies is illuminating when it comes to early modern Hispanic theatre and uses productions of Sor Juana’s The House of Desires to dive into the topic.

Anticolonial Creative Collaboration and the Development of Mirror Butterfly

Ben Barson and Gizelxanath Rodriguez, part of the Afro Yaqui Music Collective, talk about artivism—what it means, what it can look like—in relation to building a jazz opera with various communities around the world.