If You Lived Here You’d Be Homo Now 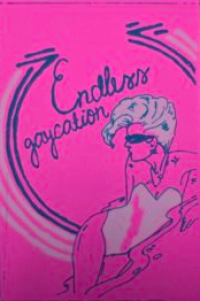 A discussion on queer performance in New Orleans requires one understanding: “We are not talking about who you fuck,” as Senora Grayson stated. Grayson along with everyone interviewed for this article were organizers of Endless Gaycation, a New Orleans-specific queer arts and music festival. Though historically a derogatory slur, the reclamation of the word “queer” by people of many sexual and gender identities has produced a multi-layered cultural and artistic framework. Miss Ross, who organized a workshop on queer ornithology, says, “Whatever we do as a queer group is different because we have been labeled that way and because we identify ourselves that way.”

Queer identity is much more complex than sexuality, particularly in New Orleans, the city where anything goes. As Hannah Pepper-Cunningham, an organizer of the “Ghost Parade,” describes, “What is magical and what is queer about New Orleans you can’t quite put your finger on. It’s elusive—you think you see it and you turn a corner and it is gone.”

Performativity can provide that needed signifier of queerness. For example, what makes queer ornithology queer? Is it just queer people in a group? For Ross, it is deeper than that. It is specifically about “not doing it how everyone else is doing it.” For her workshop, all the participants, who met at 8am on a Saturday morning to watch birds, wore wigs.

“I feel as though I am always being watched and not always by the friendliest of people. So I want them to know. If someone is going to see me, then I would rather perform,” Ross elaborates. “Anyone can do it [bird-watching]. We passed by some families and they saw five queers birding in wigs. The families were birding as well but not queerly. The difference was the wigs. That’s how we stamped it as queer.”

Queer identity is much more complex than sexuality, particularly in New Orleans, the city where anything goes. As Hannah Pepper-Cunningham, an organizer of the 'Ghost Parade,' describes, 'What is magical and what is queer about New Orleans you can’t quite put your finger on. It’s elusive—you think you see it and you turn a corner and it is gone.'

Like all of New Orleans, queer identity and performance merges with other cultural traditions. “The Ghost Parade” was organized as part of the festival to pay homage to the parading culture of the city and to the people who came before us, our ancestors. As Pepper-Cunningham explains, “The parade was a queer space because you had self-determination of your body and your ways of interacting. The parade presented the space that people could engage in as they wanted. It could hold lots of different people’s experiences of queerness.”

New Orleans can take what is already labeled as “queer performance” to a whole new level. Grayson organized the first-ever vogue ball and pageant in New Orleans this past year. Vogue has always been associated with queerness. Started in the 80s in Harlem by low-income, often homeless queer youth, vogue has spread throughout the country. Though the art form is not native to New Orleans, Grayson was sure that the city could spice it with our own flavor and own it. “In New Orleans, people know how to costume. They know all the dramatics,” she says. “New Orleans gives people the license to wile out and be just a little more crazier than if you went to a ball in Philly or Chicago.”

Pepper-Cunningham was the winner of the last vogue pageant. She says, “I didn’t go intending to participate in the ball. I was really excited to not perform actually. But I had dressed up because everyone dresses up. This is true about New Orleans and often true about queer spaces so when you put them together, then we all become performers.”

Corinne Loperfido, who also helped organize the “Ghost Parade,” elaborates further: “There’s no ‘this is a theatre zone and this is not a theatre zone.’ Every moment of your life is a theatre zone.” Pepper-Cunningham agrees, “The distinction here between ‘performance’ and ‘not performance’ is very small. You can tell just by going to any dance party. The beautiful thing about doing performance here is that people are so much more comfortable with performance in any space.”

Neither queerness nor performance exists in a vacuum or springs to life sua sponte. Endless Gaycation event organizers were all aware that what they were doing was always building off what others had done in the past. This connection to ancestry can be found laced throughout all New Orleans culture. Pepper-Cunningham explains, “We are living on stolen land in this country. People of all sexualities, races, and genders struggling for liberation have come before us to create this space that we continue to create. It is important that we both acknowledge that inheritance and look towards the future as a queer community. As we open more space to further liberate ourselves, we need to keep asking ourselves that question, for all the people who have liberated space for us—who are we doing that for?”

Hannah Pepper Cunningham is my favorite!!