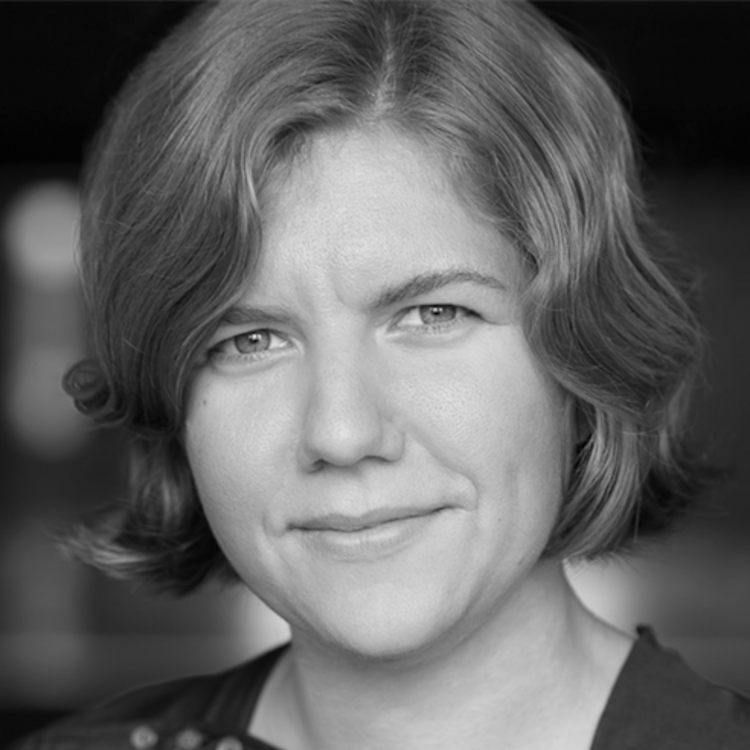 The theatre industry has long had a liberal facade, one where everyone is treated like they’re valuable and like they belong, where systemic inequity does not thrive. Behind the scenes, though, the theatre industry uses pay secrecy to maintain a power dynamic at the expense of artists. For so long, theatre artists have not been able to know if they are being paid equitably. This has been institutionalized for the betterment of companies and to the great detriment of artists. It’s clear that our industry has been functioning with, and because of, egregious equity issues.

That façade is finally being torn down because artists are sharing information and organizing.

The power dynamic between designers and companies is set up from the very beginning with how jobs are listed and offered. Often, when designers are sent inquiry emails about jobs, the pay rate is not included, requiring that the designer ask for that information. Pay information isn’t always listed on industry job postings either, ensuring that the theatre company is free to offer a designer an inequitable rate and stacks the deck for any pay negotiations. Pay secrecy also makes it difficult to spot issues of pay disparity and is why job boards that require clear rates are so crucial to building equity in the industry (hat tip to OffStageJobs.com and to the League of Chicago Theatres, both of which now require clear rates of pay in job postings). Designers often don’t learn how their fees and contract terms might differ from the other artists on board because they aren’t always able to talk with the rest of the production or design team before signing—or don’t even know who else is on the team. Occasionally, contracts forbid talking about pay rates with others, which is illegal. The designers’ union, United Scenic Artists of America, provides some pay information to its members, but financial barriers can prevent designers from joining and being protected by them. 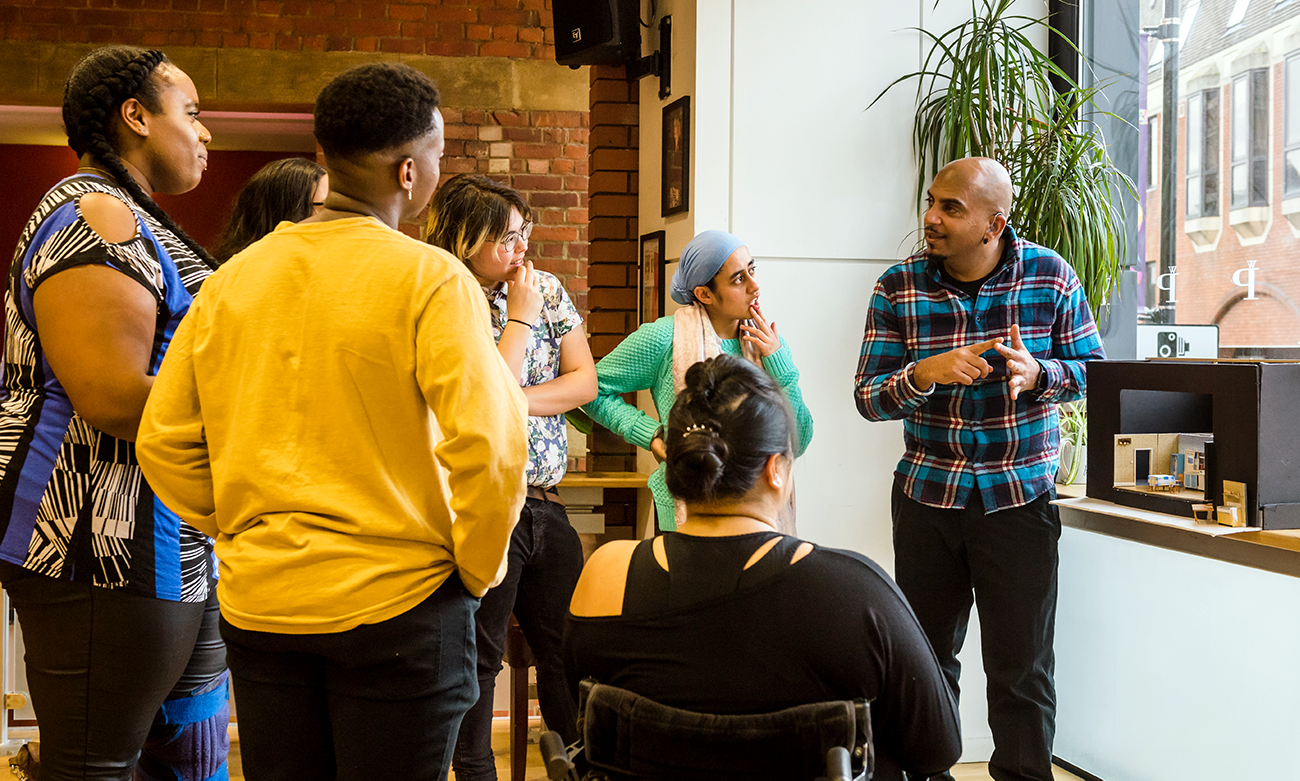 A theatre designer gives a model box presentation at a production meeting. Photo by Alex Brenner for The Stage: Theatre Stock Image Project.

Unsurprisingly, artists are held responsible for this state of affairs. Society, and artist themselves, are continuously sold the stereotype that artists are “bad” at money, uncomfortable with talking about money, or not effective at negotiation. This is not rooted in artists’ everyday experiences. Once hired, many are responsible for managing show budgets and most negotiate fees and contract terms, often dozens of times a year.

The idea that artists are “bad” at talking about money or are too concerned with competition or the veneer of monetary success to discuss their income or contracts with each other is a tool used by hiring companies to maintain a power dynamic that favors them. The industry promotes a scarcity model that tells artists they should be grateful for the few jobs there are and pits designers against each other with competition and questions of whose job is harder or which area requires more skill, whereby maintaining that designers take what they can get individually and don’t organize together on systemic issues like equitable pay.

The less artists know about the pay and terms those around them have been offered or negotiated, the easier it is for those cutting the checks to shortchange designers. This inequity isn’t a sign of a broken system, it is the system.

What happens if you challenge the system by asking about pay equity, let alone demand it for yourself or fellow designers? In my own experience as a freelance costume designer in Chicago, I’ve been threatened with legal action, I’ve not been hired back, and I’ve been called “difficult” to work with by an artistic director in meetings with other industry leaders.

Pay secrecy also makes it difficult to spot issues of pay disparity and is why job boards that require clear rates are so crucial to building equity in the industry.

In 2016, I wrote an essay about labor inequities in theatrical design. Costume designers, properties designers, wig designers, and others support the theatre industry with their implied free labor by doing the work of both designer and technician, while other designers on the same production team are given technical support. Marginalized designers have it worse, subsidizing the industry further with the inequitably lower fees they are offered. Likewise, even when technicians are hired, they also face similar equity and pay parity issues. For example, skilled stitchers are often paid less than similarly skilled carpenters or even entry-level admin staff. And the not-for-profit theatre industry is far from exempt from exorbitant executive pay that bears no relationship to the levels others are paid within a company.

Production budgets are always tight, and the majority of line items cannot be altered. Companies always have good reasons for why certain designers have more budget attached to them, but the question needs to be: Why are they paying other designers less? Materials and rent generally have fixed costs and hourly technicians and admin staff need to be paid within government-mandated or union-mandated minimum hourly rates. This leaves artists’ fees as one of the few flexible line items to balance the budget on, and the artists who are least able to advocate and negotiate for themselves—specifically Black, Indigenous, people of color; people living with disability; women; and non-binary, LGBTQIA+, and non-union artists—will be among the easiest to give smaller fees.

While some theatre companies have equitable production team fees, unequal pay for equal work is not an issue of a few theatre companies. It is a common and widespread problem that our industry currently has no way to measure.

The less artists know about the pay and terms those around them have been offered or negotiated, the easier it is for those cutting the checks to shortchange designers.

When We Know More We Can Do Better

Producing companies know how vulnerable the system makes artists and some choose to balance their budgets, pay off their debt, grant executive raises, or build capital on the backs of the artists least able to see the exploitation and least able to protect themselves against it. All of us work hard, long hours for too little pay across the board. I am not interested in discussions of which design aspects are more work, or which shows require more of a certain design area. There are many variables and, as we should all know, the simplest-looking design can often require a lot of work. Every design aspect adds value to a production and I’d argue that every design aspect adds a comparable amount of value.

As designers in theatre we have become so accustomed to being underpaid for our art, so selling ourselves short comes all too naturally. As artists, we are used to being paid in validation when the money falls short because we love our art. But when we look more closely, that validation belies an industry that pays as little as it can get away with.

When we know more we can do better. Everyone is stronger when we share experiences, contracts, and pay information. In the past few years I’ve asked a lot of questions of a lot of people—some of whom I’ve known and many more who I didn’t. Across the board (and across the country) I have found designers to be very forthcoming with their pay information. Despite what the industry tries to tell us, artists are good at talking about money, most want pay transparency, and most are willing to work together to build equity.

Workers in our industry are ready for change, but it’s going to take all of us to get it there. Everyone can be an advocate for pay equity. Whether you are on the production team, the staff, or the board, here are some suggestions on how to do your part.

Don’t settle for enabling an inequitable system. Start conversations, promote pay transparency, be an active ally, and speak up.

1. Ask questions and get answers. Ask the producing company if all designers and technicians will be given equitable labor support and equitable pay. If the company says yes, ask for some details to make sure it’s really equitable. Also, ask who else has been offered a role on the production team before you commit—and then contact those folks to share your contract terms and ask if they will do the same. Inquire about what the company is doing to increase artist pay over time.

2. Promote pay transparency. Petition local job boards to require clear rates of pay on job listings. Share your contract terms, pay, and experiences with colleagues, whole production teams, and/or publicly. I created an anonymous crowd-sourced national pay resource to share information and spark conversation. Administrative staff have used this pay resource to convince executives to raise artist pay, artists have used it in negotiations, and professors have used it to educate students on the realities of our industry.

3. Work together. If you can afford to join a union, join. But regardless of union membership, many designers have had great success uniting for group negations, ensuring that one production team member with a lesser offer is given an equitable rate before the rest of the team signs their contracts, or negotiating as a unit for better terms when several designers are offered less than others.

4. If you see something, say something! Advocate for your collaborators and fellow artists when you see inequities. Building equity requires allies. Support the work of organizations that bring people together in action around equal pay for equal work, like the Costume Designers Guild, Costume In Theatre Association (CITA), Costume Professionals for Wage Equity, On Our Team, and United Scenic Artists of America, among others.

As it is now, individuals’ experiences of pay inequity are easily passed off as personal and circumstantial, detached from the system that created them. Don’t settle for enabling an inequitable system. Start conversations, promote pay transparency, be an active ally, and speak up. We are collaborative artists trained to envision alternatives and we can work together to make them a reality. Now is the time to rebuild our industry as it should have always been.