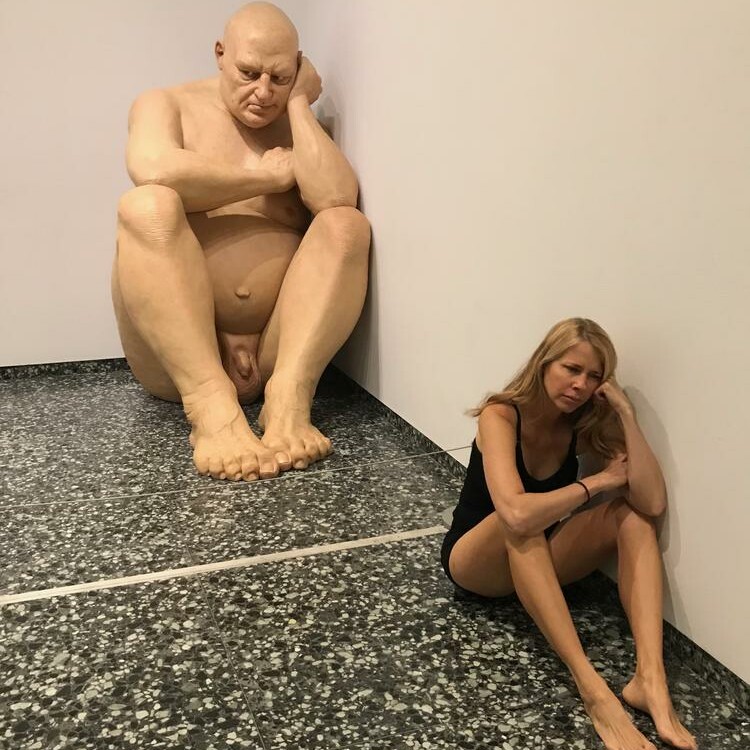 In this installment of the Theatre in the Age of Climate Change series, I decided to narrow down the focus and look specifically at how theatre, the climate crisis, and other social issues intersect since they all deeply inform each other. I invite you to reflect with us on the many intersections presented by our authors and perhaps find leverage points for greater engagement and action. In this piece, University of Colorado professor Beth Osnes shares her experience working with young women in the context of climate and performance. —Chantal Bilodeau

It Starts with Us

In this installment of the Theatre in the Age of Climate Change series, I decided to narrow down the focus and look specifically at how theatre, the climate crisis, and other social issues intersect since they all deeply inform each other. I invite you to reflect with us on the many intersections presented by our authors and perhaps find leverage points for greater engagement and action. In this piece, University of Colorado professor Beth Osnes shares her experience working with young women in the context of climate and performance. —Chantal Bilodeau

Part of developing an empowered public voice is being able to take time away to listen deeply to your own inner thoughts. A group of young women I work with did just that as they prepared for a public performance in support of climate change awareness and action.

Sitting on the rocky side of a hill outside our retreat cabin in the mountains, one of them—sixteen-year-old Leela Stoede—wrote a response to the climate change play she was rehearsing, It Starts with Me: 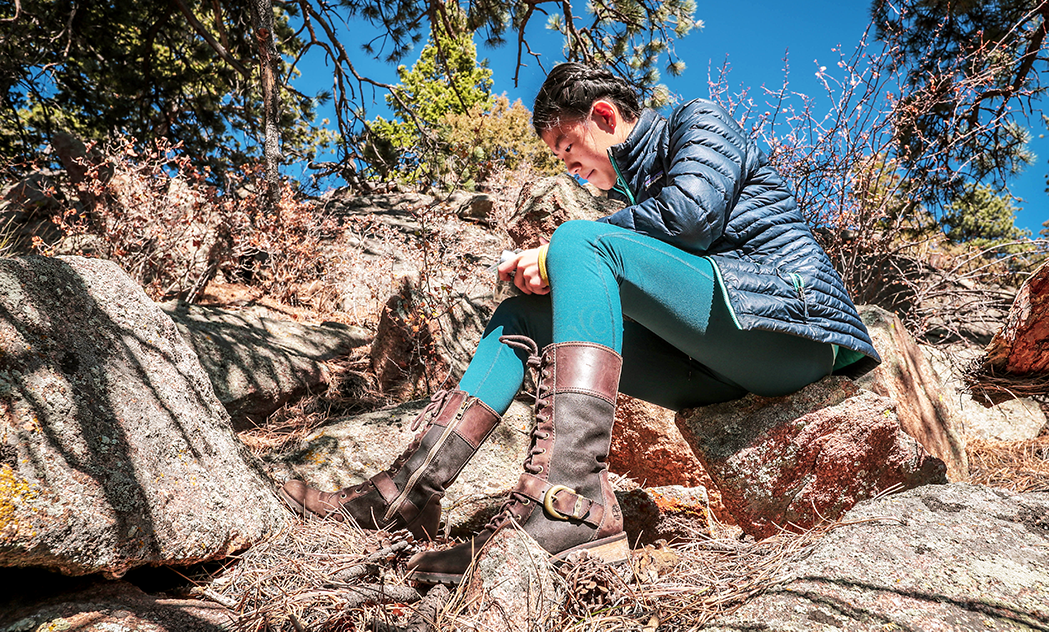 Leela is a member of Young Women’s Voices for Climate (YWVC), a group I co-facilitate with Chelsea Hackett that’s made up of nine middle and high school–aged women in Boulder, Colorado, along with several University of Colorado (CU) students. We are brought together by a partnership between SPEAK, an initiative for young women’s vocal empowerment for civic engagement, and CU’s Inside the Greenhouse, which focuses on creative climate communication (both of which I co-founded). Together we have collectively “art-ed” forwards toward our mission to advance climate awareness and action through performance.

I’ve been working with Chelsea—a recent PhD graduate and co-founder and director of SPEAK—for over ten years. In 2014, based on creative work and research we had done in Guatemala years previously using theatre for women’s participation in sustainable development, we began partnering with what is now the Maya-run Guatemalan girl’s school, MAIA Impact, to create a curriculum for vocal empowerment for their students. The resulting twelve-session curriculum combines vocal training and creative expression to support young women’s voices. It is being used by the MAIA Impact school but is also available for use by any organization working to support young women’s empowerment through SPEAK.

We first assembled and ran the curriculum in Boulder in the fall of 2017, with Leela and her cohort. We had such a wonderful time together that we’ve been meeting ever since, focusing on the intersection between feminism and climate change. In our weekly sessions, we do exercises and activities, talk about big ideas, take part in political actions (such as adding our voices to letter-writing campaigns for environmental preservation), and support each other—always working towards some climate-related public performance or showing. As an intergenerational group, we reflect deeply on what we create and how we express our creativity, but we also play hard and goof off. Each semester we gather for a weekend retreat in the mountains in a rented cabin, which are much-anticipated highlights of our time together and fulfill an essential role in reconnecting us to our ecological roots and the beauty that surrounds us in Colorado.

In many parts of the world, women experience climate change with disproportionate severity largely because of gender inequality and lack of voice.

All of the energy from our time together is harnessed when we focus on the powerful connection between challenges faced by women and challenges associated with climate change, since they both stem from similar acts of patriarchal domination and exploitation that have presided over women and the natural environment. In many parts of the world, women experience climate change with disproportionate severity largely because of gender inequality and lack of voice.

Inspiration from Other Women

I was educated in understanding the role performance could play in climate awareness and feminism by a group called Climate Wise Women (CWI), a global platform for the promotion of women’s leadership on climate change that ensures their voices as frontline climate change community leaders are heard at conferences and summits. I heard the women speak at the United Nations Conference for Sustainable Development Rio+20 in 2012 and hosted several of them at the University of Colorado for a public performance in 2014. I feel a solidarity with their performative methods that draw upon their personal experiences through the age-old art of storytelling.

Members of Climate Wise Women from around the world bear witness to the ravages on women due to climate change. For example, in Constance Okollet’s Ugandan community, floods have disrupted growing seasons, resulting in poverty and hunger that, in turn, led to increased crime such as sexual violence against women. Elsewhere, communities are vulnerable to rising sea levels, like Ulamila Kurai Wragg’s small island state Cook Islands. Wragg shares stories about how women always endure the most hardship during ecological crises due to their lack of voice and lesser status in society. The Climate Wise Women tell these truths about the hardships caused by a changing climate, but they wrap these harsh truths in personal stories. A key to their performance-based strategy is the rich details and strong emotions that increase receptivity towards these truths and lock them into their listeners’ memories. 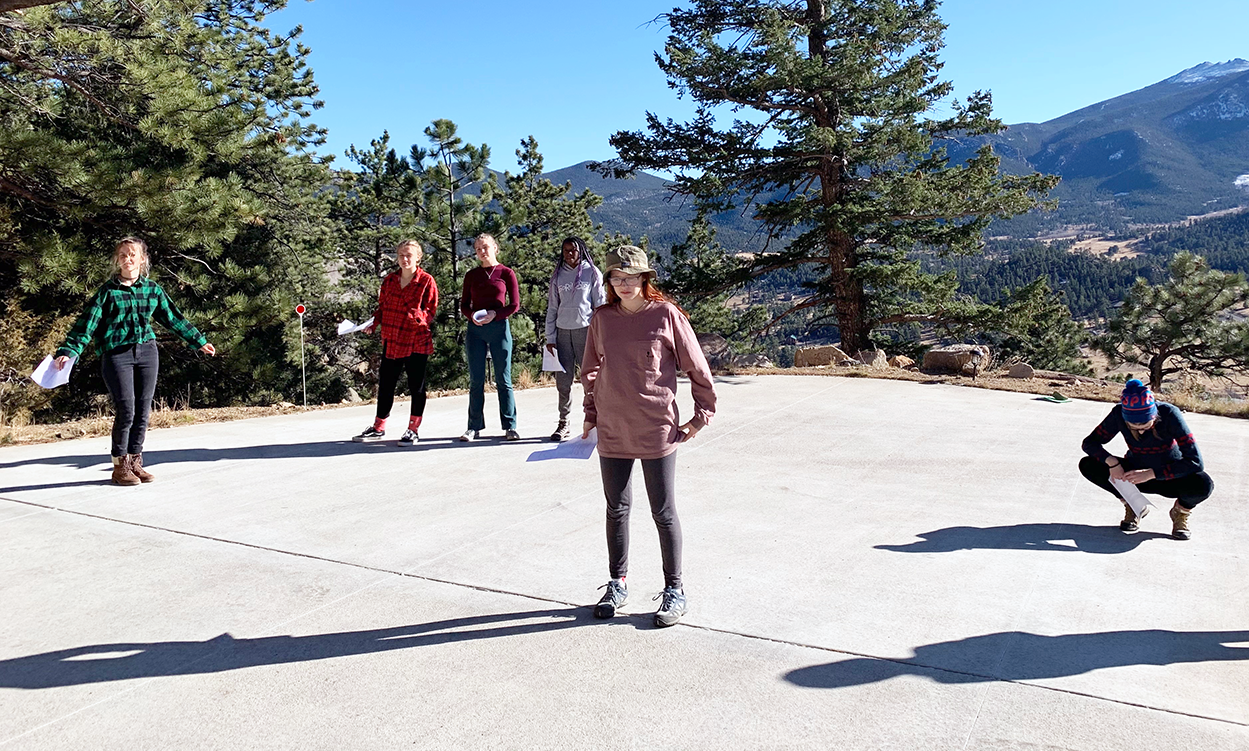 Rehearsing It Starts With Me on our retreat. Photo by Beth Osnes.

We likewise want to ensure that young women’s voices are a part of international public platforms about climate change. In November 2019, YWVC hosted a Colorado event that was part of Climate Change Theatre Action (CCTA), a worldwide series of readings and performances of short climate change plays presented biennially to coincide with the United Nations Conference of the Parties (COP). One of YWVC’s CU students, Sarah Fahmy, chose two short plays that focused on women and climate change: The Butterfly That Persisted by Jordanian playwright Lana Nasser, a challenging piece due to both the subject matter and the poetic language that dramatizes an intense conversation between humanity and the Earth, and It Starts with Me by New York–based Canadian playwright Chantal Bilodeau, which not only further educated us on the interconnected realities of women in relation to climate change but also unleashed a powerful conviction through the students’ embodied voices.

A few weeks before the performance, we all went on a weekend retreat near Rocky Mountain National Park. We rehearsed for hours in a clearing outside our cabin on a rare warm fall day, a backdrop of the Rocky Mountains behind us. Being immersed in nature—the pine-scented air, a nice breeze that tossed our hair around, and the Earth beneath our feet—definitely helped the process and deepened our connection to the content of the plays. As part of the retreat, we invited the young women to find their own spot in the hilly woods behind our cabin and, using pen and paper, to free write on their feelings and thoughts about each of the plays they were rehearsing; Leela, writing from her perspective as a girl raised in India who had to move back to the United States as a young woman, penned what came above.

About the play It Starts with Me, Eliza Anderson, another of the young women, wrote, “In a world with seven billion people, it’s hard to feel as if you have the ability to make a difference; reading this play helps me feel as though I can.” Sofie Wendell wrote, for her part, about stopping the pillaging of our planet. “Yes, we have a right to be angry at all the past generations who have started and continue to destroy this Earth,” she articulated, “but we can’t be mad at the fact that old generations are not trying to preserve our future. … We need to embody this anger and make the changes ourselves because it is our future.” Another student, Lerato Osnes, wrote: “I am the one who can make change and help other people make change. It starts with me, a female in a male-dominant society and a minority in a white society.”

It’s important that the voices of young women are strengthened so they are able to advocate for a survivable future.

Olympia Kristl’s writing seamlessly intersected other life forms and ecosystems with her own embodied experience. “It starts with me… My feet stand on the ground, roots spreading down deep into the Earth,” she wrote. “I stand tall and strong like a tree, knowing that it starts with me. … I can see figures coming into view. They are my friends, the ones who are not afraid to think about the future. The ones that take a step with me. It starts with us.”

The young women performed these two brief plays as an ensemble at the Old Main theatre at CU for an audience of 150 people. Between the plays, they led attendees in a creative process of their own expression. We asked the audience to equally divide themselves into groups, and one of the young women guided each group in creating collective word clusters based on the phrases “Our vision of Boulder’s future includes…” and “Our vision of the World’s future includes….” The contributions were added to two posters. The first was presented to the City of Boulder Environmental Planning team heading up Boulder’s Climate Mobilization Action Plan. The second was taken to Madrid for the UNFCCC Parties Conference of the Parties (COP) just weeks after our event and displayed at a meeting on gender. We were told attending women were deeply touched by the messages expressed. 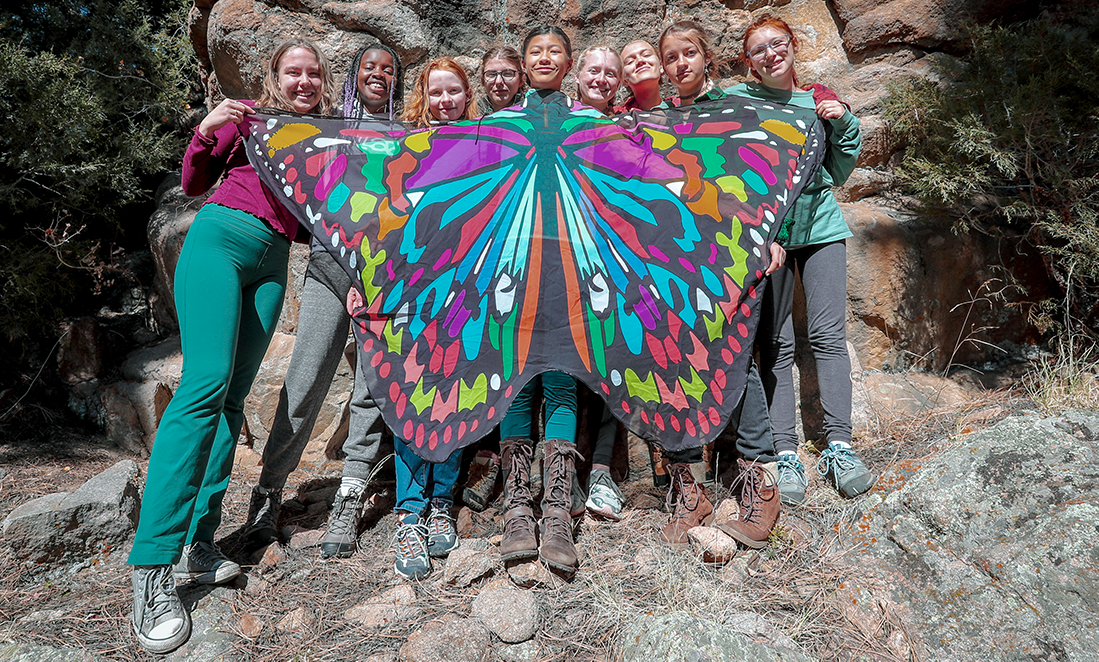 Fostering a Community of Women

At its heart, YWVC is about vocal empowerment for young women to creatively support their civic voices. A powerful way to do so is to share the collective wisdom of the women in their community who have effectively used their own voices to work towards positive social change. During the performance, eight female community leaders (including Boulder’s mayor), activists, and artists assembled on the stage with the young women and each shared advice for being empowered.

It’s important that the voices of young women are strengthened so they are able to advocate for a survivable future. Connecting to each other as young women, to the natural world, to their supporting community, and to their voices through performance has contributed towards their self-expressed empowerment and their ability to—as Eliza wrote—make a difference.