The convening brought together many highly regarded veterans and emerging young artists of Latino origin, spanning a wide spectrum of theater makers in America. 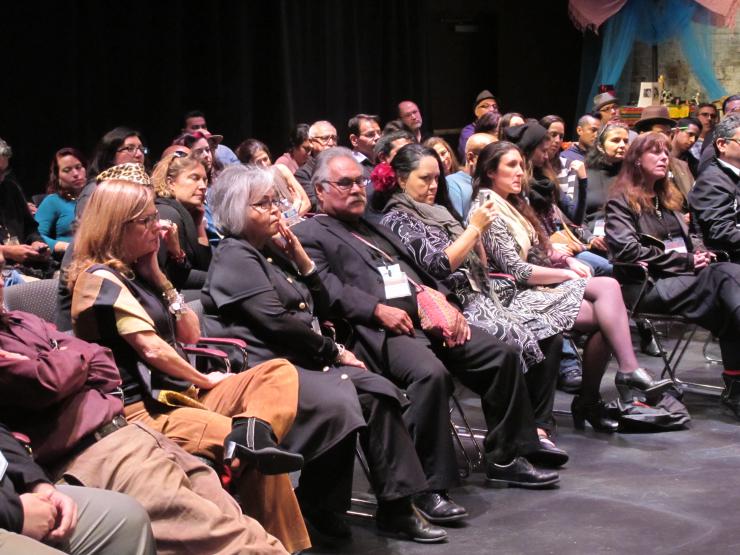 The first day of the three-day convening (October 31-November 2) focused on facilitating and enriching connections among Latinx theater makers of diverse backgrounds. When the facilitators of the convening asked the attendees to gather in distinct professional groups and to form a circle ranging from the greatest to the fewest numbers of years in the theater, the experiment produced some interesting results. The convening included 24 playwrights, 7 actors, 21 directors, 10 scholars, 11 producers and administrators and 3 designers. The participants’ time in theater ranged from an impressive 52 years to a mere 2 years for the youngest theater makers at the convening. Participants were also asked to introduce themselves by region, with the greatest number of participants hailing from Chicago and Los Angeles.

“Our cross section speaks to our relationships with one another. As ambassadors for the Latinx Theatre Commons, we hope to strengthen these relationships and bring other people into the fold,” said Kinan Valdez, one of the three convening facilitators.

In a keynote address Valdez, who is also Artistic Director of El Teatro Campesino hailed the event as “The first national convening of Latinx theater makers of the century and of the millenium.” This year’s convening is historic because it marks the “first large-scale formal gathering of the Latina/o theatre community since 1986.”

Through a series of concocimiento groups sessions and intensive discussions directed by the different specializations of the gathered theater makers, the  convening will explore the history, challenges, opportunities, and future directions for Latinx theater makers. Historian of Chicano and Latinx theater, Jorge Huerta stressed that one of the major goals of the convening was to articulate a vision for the future: “Where are we going? I would like us to visualize what Latina/o theater would be like in 2046,” said Huerta.

Karen Zacarías first floated the idea of a convening to Polly Carl and other members of HowlRound at Arena Stage. In her speech, she highlighted a journey that began with the meeting of 8 Latinx theater makers in May 2012 and blossomed into the first official convening of the Latinx Theatre Commons.

But the evening was primarily about the genesis of the Latinx theater family in the United States. An altar decorated with bright, multi-hued tapestries from Mexico and Guatemala and a visual timeline portraying a collage of Latinx theater history from the 1960s to the present were the centerpieces of the first day of the convention. In a ceremony that intertwined cultural ritual with personal and professional milestones, participants were asked by Luis Valdez, author of Zoot Suit and founder of El Teatro Campesino, to congregate in a wide circle. He proceeded to lead them in a prayer for the four directions. Participants were then asked to make an offering at the altar that would signify something meaningful about their lives as artists and theater makers.

This was the most riveting portion of the evening as all 78 theater makers shared objects and the stories behind them before placing them on the altar. The objects, in many instances, also invoked the ethnic origins of the participants encompassing much of Latin America. Chicana scholar/artist Irma Mayorga who played the role of Helen Keller in a multicultural production as a child placed a photograph of Keller at the altar. Sandra Marquez of Teatro Vista chose a career in theater after being deeply inspired by a reading by Sandra Cisneros and tonight she placed a cover of Cisneros’ book at the altar. The offerings ranged from a glass of Cuban rum to a colorful Mexican top to photos of beloved parents who had immigrated to the United States in search of better opportunities—each artifact a source of deep inspiration, heritage and hope for the Latinx theater family. 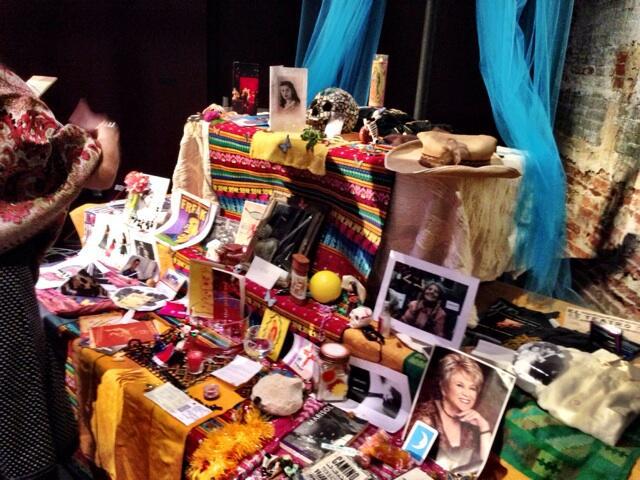 Participants enthusiastically participated in the creation of a visual timeline for the history of U.S. Latinx theater. The coordinators of the timeline, Jorge Huerta and Juliette Carrillo, invited everyone to map their work and contributions to Latinx theater: professional, organizational, and scholarship. “It will be like a rebozo, a tapestry of intertwining threads that will be the history of Latinx theater in this country,” said Huerta.

While Huerta and Carrillo outlined some of the significant events from the 1960s to the present, the participants avidly filled in the rest of the history. The history ranged from the founding of the iconic INTAR theater in 1966 to Miguel Piñero’s Obie award winning “Short Eyes” in 1974 to INTAR’s Hispanic Playwright’s Lab under Maria Irene Fornes in 1981 to Nilo Cruz’s 2003 Pulitzer prize winning play, Anna in the Tropics.

This canvas of history gave an opportunity to artists to trace inspirations, connections and collaborations that led to important professional and artistic breakthroughs. 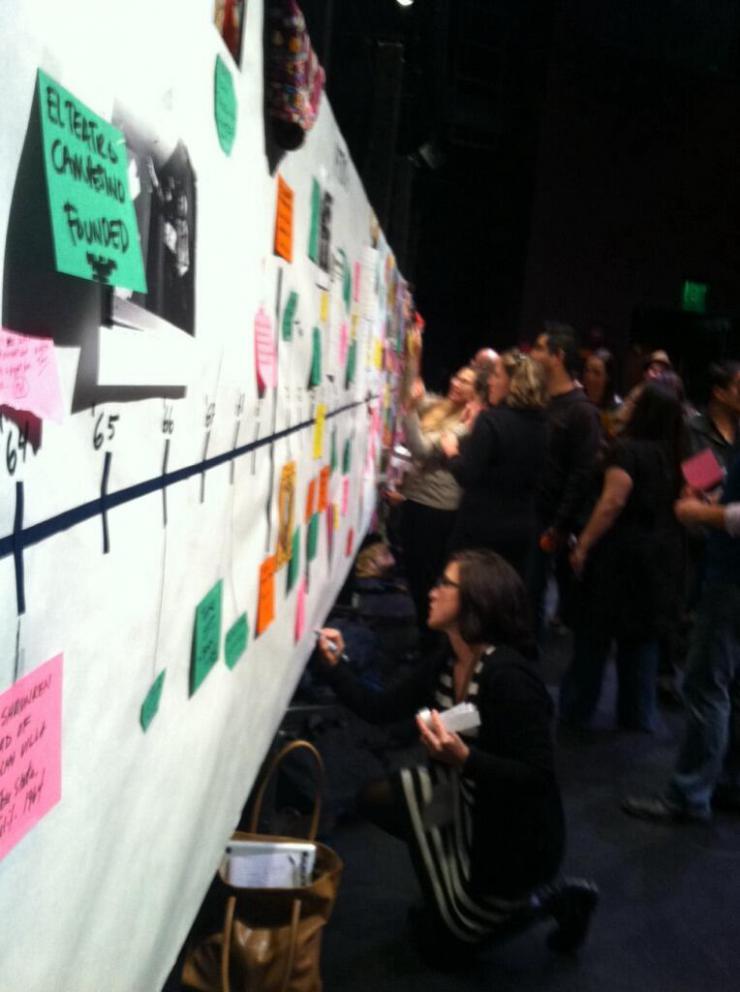 Not surprisingly, the 2000s represented the busiest period in Latinx theater history on the timeline. Among the many significant theatrical milestones highlighted by the convening participants were Luis Alfaro’s Oedipus El Rey (2010), Chantal Rodriguez’s manuscript Latino Theatre Initiative 1980-2005, and Caridad Svich’s founding of No Passport theater and press.

Most importantly, this canvas of history gave an opportunity to artists to trace inspirations, connections and collaborations that led to important professional and artistic breakthroughs. The young director Jerry Ruiz drew an arc that traced his collaboration with Tanya Saracho and Mando Alvarado on a “very small show” One Night in the Valley  which eventually paved the way for his recent Off-Broadway venture: the direction of Alvarado’s Basilica (2013). “It has been an incredible journey with a set of people,” said Ruiz. 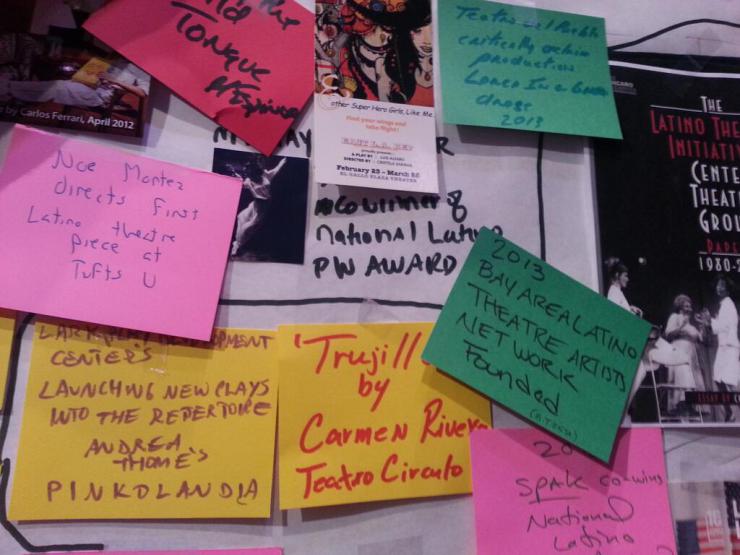 The night ended on a note of great promise for the next two days of the convening. In the words of Olga Sanchez and Clyde Valentin, Friday will be dedicated to a “deepening of our knowledge about practices in the theater,” and on Saturday “the committee will envision and think of next steps for Latinx theater.”

Please join us on Twitter hashtag #cafeonda and on HowlRound TV at howlround.tv to continue this exciting, historic and deeply important conversation about US Latinx theater. View the complete video archives, livestreaming schedule, and session descriptions here.

Day three of the Latinx Theatre Commons asks for everyone to make a commitment to mentoring and being a mentee to each other in order to continue building community.

Day two of the Latinx Theatre Commons results in a declared Latina/o Theatre Day in Boston, a quandary of if there needs to be Latina/o theatre, and the strength to make their own table.