“To never hear again: ‘There’s not enough money to do a Mexican American Play.’ Do we say the same about Norwegians for Ibsen?”

“Artist or Latino artist? Am I one or both?”

“Migdalia Cruz’s response to all the Mexicans at the Latina/o National Convening in Boston.” 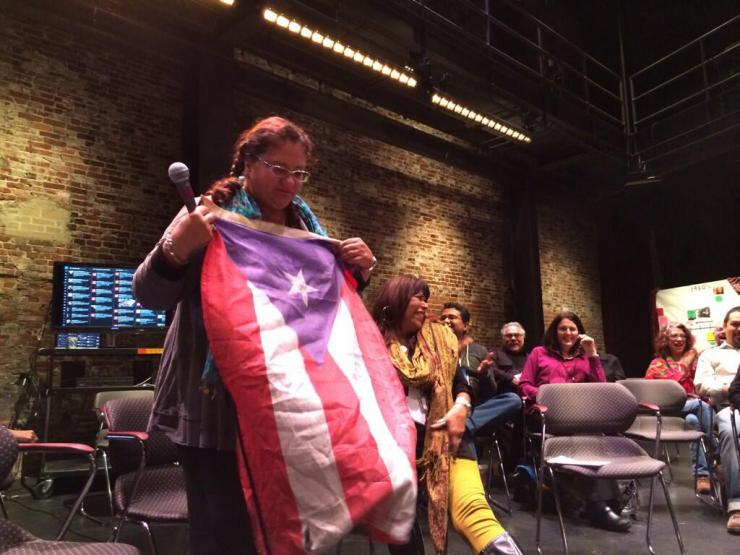 These are just a few of the hundreds of tweets on hashtag #cafeonda that were trending high on Twitter on the second day of the Latinx Theatre Commons National Convening (November 1): participants and observers, both local and national, determinedly stalked and tweeted about the fascinating, stirring, and eye-opening conversations on theater practices by 78 Latina/o theater artists from around the country.

Mayor Thomas Menino declared November 1 Latina/o Theatre Day in Boston. As actress Sandra Delgado read the proclamation from city hall with evident joy and pride; it seemed a beautiful and fitting tribute and recognition of the historic nature of the convening. 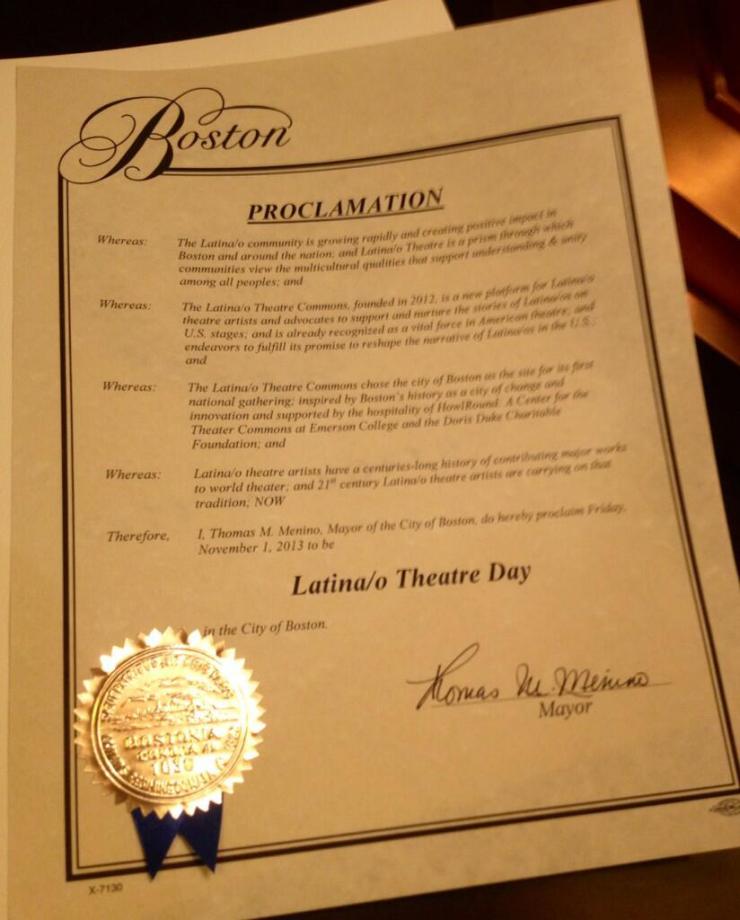 The unusual structure of the conversations, dedicated to “deepening our knowledge of each other as well as deepening what we are doing in theater,” helped facilitate a remarkable openness, inclusivity, richness, and depth of perspectives on the identity and future of Latino theater.

The participants formed circles of conocimiento or small groups of knowledge sharing around the subjects of regional theater, community based theater, academia, independent artists, international theater, and ensemble. Each group shared  a report with the rest of the participants at the end of the day.

Interspersed with the conocimiento were three listening sessions structured around creators (playwrights, devisers, and dramaturgs), translators (directors, designers, artists, and actors), and pillars (leaders, producers, administrators, and scholars). But participants outside each listening circle were also invited and encouraged to respond to pressing issues and questions on the state of Latino theater. 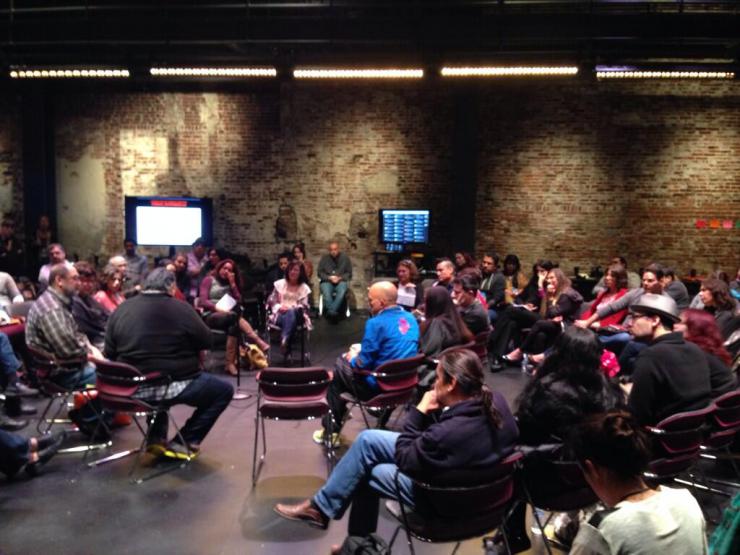 The themes of Latina/o identity, the economics of producing Latino plays, and the visions and dreams for the future of Latino theater dominated conversations across the sessions. Participants gave voice to the contradictions between the prospect of a Hispanic majority nation in 2046 and the continuing marginalization of Latino themed plays in the American theater.

Luis Valdez, author of Zoot Suit and founder of El Teatro Campesino was greeted with resounding applause when he articulated his definition of Latino identity in America. “First and foremost ‘Latino’ is an adjective. But we are using it as a noun. The noun is ‘American.’ We are seeing the merger of New England and new Spain. We invite Anglos to come and join the mix. We are also Anglos,” said Valdez.

Speaking about his experience of directing the Spanish world premiere of Zoot Suit in Mexico City, Valdez continued, “Think of yourselves internationally—get translated in Spanish. It is not just about relating to the United States. It is about America. America!”

In her eloquent response to the question of diversifying productions, Diane Rodriguez of Center Theater Group spoke of the need to work with a multicultural team of artists on Latino-themed plays. “The question is not should we be getting rid of Latino theater. Instead, it should be: How can we lead the diversity/inclusion conversation by showing how it is done?”

The question is not should we be getting rid of Latino theater. Instead, it should be: How can we lead the diversity/inclusion conversation by showing how it is done?

The discussion turned to the continuing relevance and necessity of a Latinx theatre commons in the twenty-first century after  moderator Abel Lopez posed a “provocative” question: As we see a more diversified America is there a need for Latino theaters?

Playwright Josefina Lopez responded with an emphatic “Yes.” “If I didn’t have my own theater company, I wouldn’t be able to produce my plays,” said Lopez who had trouble finding a theater company in Los Angeles to produce her famed play, Real Women Have Curves.

“I wish we didn’t need Latino theaters, but I need it so I can get my story out there and the stories of so many which aren’t being told,” added Lopez.

Performance historian Brian Eugenio Herrera echoed a similar sentiment, “If there is a theater in the future, you bet there will be Ibsen, you bet there will be Shakespeare. We need to continue that deep dive into the depth, breadth, and full dimension of Latino expression, we need that diversity of forms. Otherwise we will be the one-shot entertainment guest in the master’s house.”

The Conocimiento group reports stressed the importance of community, dreams, artists’ relationships with regional theaters, attentiveness to minoritized indigenous and African histories within Latino history, the desire to be both Latino and part of the American canon, a need to create culturally competent audiences, strategies for funding and financial support, greater visibility, and local and international collaboration.

The highlight of the day arrived when Luis Valdez kicked off the Sí Se Puede rap to explain the essence of Latinidad. DJ Juan Amador beatboxed and rapped on issues of identity, audiences and economics in Latino theater. Later he sent out an ecstatic tweet, “I just beatboxed and freestyled a presentation with Richard Montoya and Luis Valdez on the chorus! #bucketlistiwouldveneverguessed.” 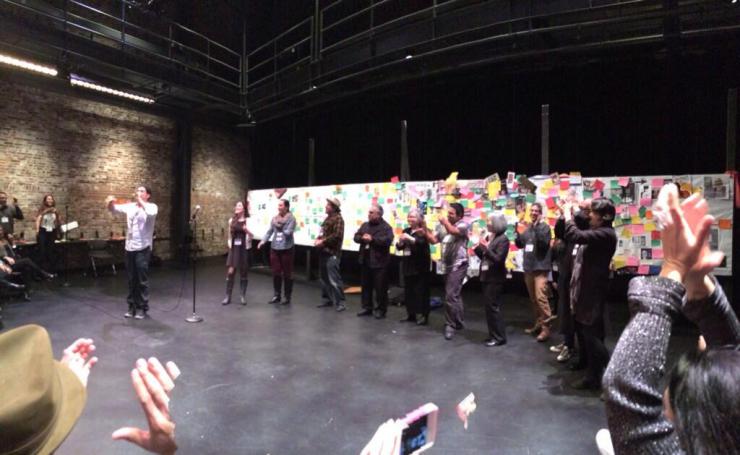 The second day of the convening ended on a stridently positive note about the potential and possibilities for Latina/o theater. Diane Rodriguez emphasized that the convening arose from a sense of power, from the ascendance of Latinos in theater to leadership positions. “We come from a different position in 2013. We have created our own table. We are more empowered.”

Please join us on Twitter hashtag #cafeonda and on HowlRound TV at howlround.tv to continue this exciting, historic and deeply important conversation about US Latina/o theater. View the complete video archives, livestreaming schedule, and session descriptions here.

Day three of the Latinx Theatre Commons asks for everyone to make a commitment to mentoring and being a mentee to each other in order to continue building community.

The Latina/o Theatre Commons National Convening has finally arrived in Boston. 78 Latina/o artist converged together for the biggest meeting since 1986.