Leslie Odom Jr. And His Three Rules for “Getting Into The Room” as a Professional Performer | HowlRound Theatre Commons Skip to main content

Leslie Odom Jr. And His Three Rules for “Getting Into The Room” as a Professional Performer 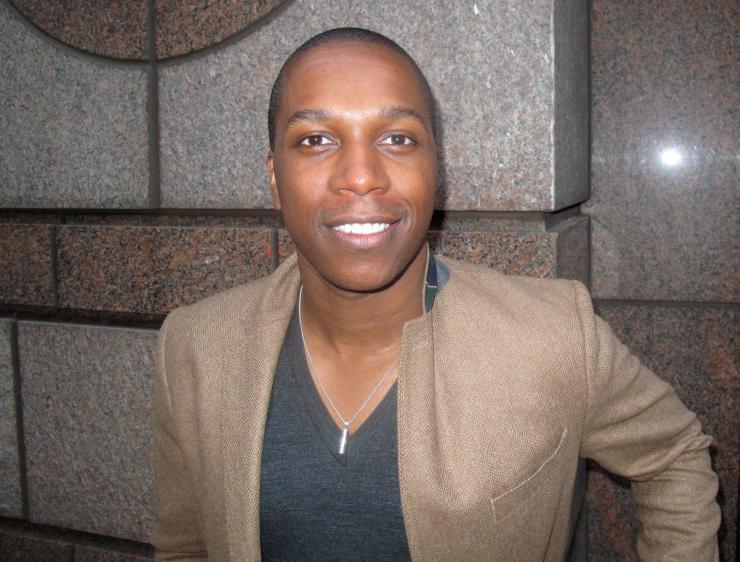 Leslie Odom Jr. was a huge fan of Rent when he was cast in the musical at the age of seventeen, the youngest performer ever hired for the Broadway production. “It was getting cast in that show that made me say ‘I can do this as a job’”—he can become a professional performer.

In the sixteen years since, Odom has become a familiar face on television, appearing on some dozen series, most noticeably as Sam Strickland in Smash, but he has not abandoned the stage, performing in the world premiere of Jersey Boys at the La Jolla Playhouse, returning to Broadway in Alan Mencken’s Leap of Faith, and acting in a number of Off-Broadway shows, including a revival of Rent composer Jonathan Larson’s tick tick Boom.

“I haven’t felt as thrilled about anything as I did about that first show….until now,” Odom says. “Hamilton makes me feel the same way.” Odom has been cast as Aaron Burr, Alexander Hamilton’s rival, in Lin-Manuel Miranda’s musical, which is scheduled to run at the Public Theater from January 20 to March 22, 2015. As with Rent, Odom saw Hamilton first as a member of the audience, when Miranda brought the first act of the show to Powerhouse Theater at Vassar two summers ago through New York Stage and Film. “It is the most contemporary score you’ll ever hear—hip hop and r and b,” Odom says, “but Lin applies the rules of theater to make it work on stage.”

He was also floored by the non-traditional casting for the Founding Fathers, such as Christopher Jackson, an African-American actor and composer who has performed in such shows as In The Heights and Holler If Ya Hear Me. “I watched him step forward and introduce himself as George Washington—and I never questioned it for a second. That’s a meta layer of this show.”

Two months after he saw this work in progress, Miranda sent him an e-mail, asking for help with the show. This is what one could call a coincidence, or connections (“We knew each other casually.”), but Odom looks at it differently: “It took ten years of backbreaking hard work to get an opportunity like that. One thing leads to another. You find yourself in these rooms.”

How can other theater artists get into these rooms? Spontaneously, he comes up with three rules he lives by:

1.) Never wait for permission to practice your art. You cannot wait to get a job to be an artist.

Odom cites with admiration the example of his current collaborator, Lin-Manuel Miranda, who created his own opportunity as an actor through making In The Heights. “How many opportunities are there for Latino performers? He created his opportunity.”

While Odom says in his particular case he has been lucky in getting acting jobs, he did not even try getting a recording contract for his first solo album, which was recently released. He funded the self-titled album through Kickstarter. “When I do TV, when I do theater, that’s me being a part of somebody else’s work; I am a for-hire. With the album, I wanted to do my thing.”  Aiming to raise $30,000, he got nearly $41,000 from nearly 700 backers.

“It’s way easier to create your own opportunities now than it used to be, because of technology. Creating the art is easier, but you also now can connect much more easily with an audience.”

Odom is an active user of social media; 95 percent of his backers on Kickstarter, he believes, were brought from his Twitter feed or Facebook page. That was not the only way Twitter helped. Odom was a fan of the guitarist Michael “Nomad” Ripoll, whom he first noticed on some online videos with Kenny “Babyface” Edmonds. “I sent him a couple of Tweets—and I got him to play on my record.”

He admits “there’s another side” to social media. “It’s really easy to get anonymous hate. But I haven’t gotten that.”

When he was a young child, “people would ask me what I wanted to be, and I would answer a doctor, a policeman, a cowboy, an actor: I wanted to try all those things; I think it was about the costumes.” By the time he was in high school, after years of school plays, church choirs, and community theater, he had narrowed it down. But when as a high school senior in Philadelphia he went for the open call audition in New York for Rent, “it was a Hail Mary pass; nobody thought I would get it.”

It was a given he would go to college. His experience on Broadway convinced him the choice should be Carnegie Mellon, a conservatory.

Six months into his freshman year there, Bernard Telsey, the casting agent who had hired him for Rent, called again: How would he like to come back to Broadway and do the role of Mereb in Aida?

But his parents wouldn’t.

“My parents basically threatened me—‘there’s no way you’re doing that.’ I was mad at them for a long time. But it was the right decision. The single most important decision in my life was to go to Carnegie and finish. I learned craft and technique. I made lifelong friends,” including classmates Josh Gad and Rory O’Malley.

But his education as an artist continues to this day.

You have to become an expert. That means classes of course, but the world is a classroom too. I go to see at least one Broadway or Off-Broadway show a week. I have to see what’s going on, what the leaders in the profession are doing, whether at a 54 Below concert or a show at Lincoln Center. These are the artists of my generation. I want to see what their repertoire is, what they’re experimenting with, what their band’s like.

3.) Find a spiritual practice that works for you.

You have to nurture that part of yourself. It’s a hard walk. I focus on my career a hell of a lot. There have been crushing disappointments along the way. It’s not a fair business, there’s not always a rhyme or reason to it. It’s really tough. There are really brilliant performers who get taken down because of the pressures. So you need to focus on light and positive energy. Surrender to the part of it that you can’t control. Whether it’s yoga, meditation, prayer, in this business, you need a spiritual practice. My spiritual practice includes prayer and meditation. I walk with God. I would consider myself Christian, but my wife is Jewish. The thing that is common in all the religions is a loving, divine presence. Part of spiritual practice is also having great friends, nurturing great relationships.

If he looks to the spiritual, he relishes the devilish role he is currently rehearsing. “If you’re an actor and you have any inclination to chew the scenery, a bad guy is what you want to do.” But if Aaron Burr is definitely a bad guy in Hamilton, “Lin has written him with compassion, which forces the actor and the audience to examine the complexities of his relationship with Hamilton.”

All in all, Odom clearly feels lucky to be in the show: “When you perform alongside Lin, it feels like you’re at the center of the universe.” Still, this is an Off-Broadway show with a two-month run (albeit one that has “Broadway transfer” written all over it). What would happen if another television series came his way?

Where I am now (and it changes all the time) television is nice work when you can get it—good money, long hours. But I use a very small part of myself. It’s a very compartmentalized art form. We’re looking at little tiny moments all day long. I want to be used… I want to be used up. I want to run to a project that uses me fully. They’re asking me to do things I never thought I could do. What’s being asked of me is so high it’s exciting.

On the other hand, “five years from now, I may want to pay all my bills.”