Long Distance Affair, a PopUP Theatrics international collaboration between playwrights, directors, and actors worldwide, is a project conceived by Ana Margineanu, developed with Tamilla Woodard, and produced by Molly Morris. It is being presented at the 2013 Edinburgh Fringe. This is the last of a three-part series on the process behind making Long Distance Affair.

Garret Jon Groenveld: What made you want to participate in Long Distance Affair?

Jason Lindner: I believe very strongly that the future of theater means creating non-traditional spaces. More specifically, it means getting out of the actual theater space and bringing interactive pieces to people via technology.

Ethan Chia: I'm always excited by international collaboration. I feel that there's a great openness and receptivity in the global arts community that is sometimes lacking in the competitive environment of a local or regional theater industry. It's truly amazing to bounce ideas off someone halfway around the world who doesn't have preconceived notions about what you should bring to the table.

Mariano Blanco: [In the last Long Distance Affair] Tamilla showed me that it is really fun and educative to work in collaboration, so that excites to me a lot. To work on a play in English was a big challenge for me. I had a great director and actress, and the play was really beautiful, as something sad can be. We got to offer options to the audience to choose what they wanted to see: Chekhov, Shakespeare, or Beckett— but always with toys. The play is a game between audience and actor, and a performance celebration.

Garret: What has your process been like so far?

Mariano: We have had maybe five meetings with Jason, our playwright. He is very patient and he listens to our opinions. I have been rehearsing with Ethan every day for three weeks.

Ethan: It's kind of like watching particles collide. We do Google hangouts and throw out ideas and try to work in what we can. There are of course times when we go "yeah, this bit is too long" or "this doesn't quite make sense," but therein lies the luxury of having a playwright in the (virtual) room with you—they can take care of the performance and change things on the fly and you don't have to worry about a lawsuit.

Jason: The interaction has been wonderful—it’s such a charge to talk internationally in order to create a piece of work. The story has been a true collaboration with ideas sent round and round. We initially talked about how best to take advantage of the medium and foster some interesting interactivity.  Another consideration was the fact that Ethan, the poor fellow, would have to act this piece over two hundred times. Because he is adept at improvisation, I wanted to craft a piece that would allow him that freedom and not mire him down in specific dialogue. After all, the interaction with the person on the other side of the screen should be specific and intimate. The largest challenges have had to do with me letting go—the original script was way too long and though we all felt it was strong, we needed to find a good way to get the same punch out of a much shorter prospect. I think we’ve come out with something clearer than before that retains the original intent and presents a more direct message.

Garret: Have you participated in anything like this before, if so, what was it, how was it similar/different?

Ethan: I've done international collaborations before, but nothing quite this intimate or flexible.

Mariano: No. In Buenos Aires we are used to writing and directing our own plays, so this is totally new for me.

Jason: Well obviously there is a distance created when someone is on the computer rather than in the room and that lowers the tension and the immediacy. There’s less danger, it’s true, but there’s less artifice too. It’s necessary to really heighten in order to bring it back to the danger level of live theater. That being said, I think because life is now lived via the machine that distance is becoming lessened every day. Ultimately, a shared experience is a shared experience and that is the purpose of theater. The performance is still immediate, made more so by the addition of the element of individual interactivity. In that sense the computer screen is no different than a proscenium stage—but it’s harder to throw rotten tomatoes. Maybe rotten tweets.

Ethan: Speaking as a theater artist who also directs and designs, technology is a great tool that's there to help the storytelling and to craft the experience. Provided that it is used in the appropriate magnitude. I mean, when we had our first meeting, I told Jason straight up and quite unabashedly that I didn't want to do a ten minute monologue. As a performer, I very much wanted to create an event that absolutely necessitated the audience being there.

Garret: Long Distance Affair is not only about technology, but also about how technology crosses borders. How did that affect your work?

Mariano: We didn´t base our work on technology—we based it on the idea of a one person audience. 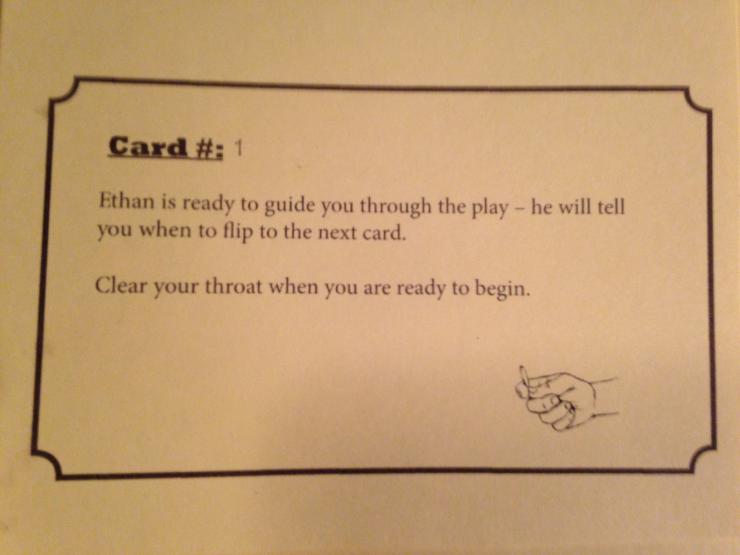 Ethan: We talk a lot nowadays about the world shrinking because of the Internet, but it seems like we fail to really grasp what that means. What's really at the heart of Long Distance Affair both in terms of the process and the production is the transference of the human experience via the Internet.

Jason: Well aside from making scheduling rehearsals very difficult, it meant that I was looking for ways to exploit the distance in the piece and play with that.

Garret: How do you think this experience will affect your work going forward?

Ethan: I think it already has. I'm currently directing a production of The Woman In Black here in Singapore that is designed to be immersive, to make use of technology to create an event for an audience. It's going to be a very collaborative process with the team building a collective consciousness about what fear is, how we instill it in other people, how the imagination plays a part.

Jason: I have a real fetish for theatrical techno-magic. The concept behind this is something I would love to expand—I imagine full length plays being performed by people in many cities all at the same time. I’ve got a grant proposal in my back pocket.

Mariano: I had in my head a play that was all made by the conventions of live performance. When you share your art, there’s no distance. This sounds like a bad love film, but it is real. Jason and Ethan are my friends now.

Garret: Jason, what is exciting about writing for an untapped theatrical technology?

Jaon: The excitement is derived from creating ideas about how the new medium might work best. As it’s never really been tried before you can bash things off the wall and see if they will work. Probably when the fourth wall was eventually rebroken there was this kind of outpour of blind imagination. What else can we do? And then what? It’s overwhelming and makes my blood roll forward with anticipation.

The excitement is derived from creating ideas about how the new medium might work best. As it’s never really been tried before you can bash things off the wall and see if they will work.

Garret: Ethan, I understand you are performing the piece in your home. What special arrangements have you made to make sure you aren't interrupted?

Ethan: Actually, I just have a sign up on my door that says "rehearsal in progress. Dad, please turn down the volume on Game of Thrones in the living room." I've been doing this for long enough that my household understands. I hope.

Garret: What place do you think Long Distance Affair has in the history of global theater and the future of technology in theater?

Jason: It’s a first step into an amazing world of possibilities. With the strides in holographic projection (Isadora and Eyeliner tech —I’m a nerd) and other forms of interactive theater—I think there is no doubt this is where theater is heading.

Ethan:  I think it's made cyberspace an arts center, really. I mean, look at the next few years' worth of technology and try to imagine what we can do. When Google Glass comes out, you can bet that I'll be using that in Long Distance Affair.

Mariano: Oh, I don’t know. I think we work on theater because it is a way to escape from death, but I don’t think on those things, I just prefer to focus on the day-by-day work.

Interviews
Cross-cultural Exchange and Cultural Mobility
Process
Digital Media and Technology
Most Discussed
Designing Collaboration: In Search of a Taxonomy of Collaborative Methods
Emily McConnell
Most Watched
The Gathering from the CrossCurrents Festival
Wednesday 4 May to Saturday 7 May 2022
Upcoming
Livestreaming a Conversation: #DeafWoke with John Autry II
Friday 20 May 2022