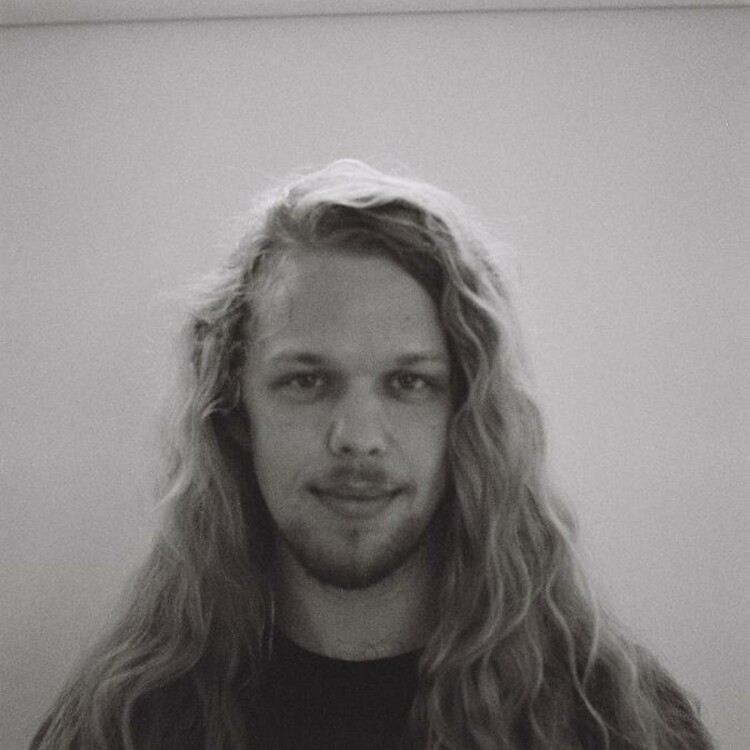 This essay is Part Two of a three-part series on Atlanta's DIY performance scene. You can read Part One and read Part Three of the series.

Made With Soul in Atlanta

This essay is Part Two of a three-part series on Atlanta's DIY performance scene. You can read Part One and read Part Three of the series.

It was June of 2016, and I’d just arrived in Atlanta to meet the crew of artists and administrators at the Eyedrum Art and Music Gallery for its twenty-four hour dance event at the Modern Atlanta Dance Festival. I was a rising junior, training in dance at Troy University, and had applied to the event as a choreographer looking for fresh opportunities to develop my creative voice. A couple of good friends had just moved to Atlanta and had been forwarding me emails with opportunities over the previous year. The city’s art scene was more active than I’d thought, so I wanted to get a closer look and see what else was going on.

As I pulled onto Martin Luther King Jr. Blvd, I noticed the color scheme of the city’s South Downtown district was asphalt black and drab cement, and the buildings were mostly square and angular. The area felt much more brutalist than bohemian. At the time, Eyedrum’s gallery space was nestled in the corner of one of these concrete behemoths. Its grey and gritty exterior opened to a warm and welcoming interior. “Be careful coming into this elevator,” warned Morgan, the coordinator of the event, as she led us through the building. “This morning somebody took a shit at the entrance. I had to clean it up with bleach, but you can still kind of smell it.” 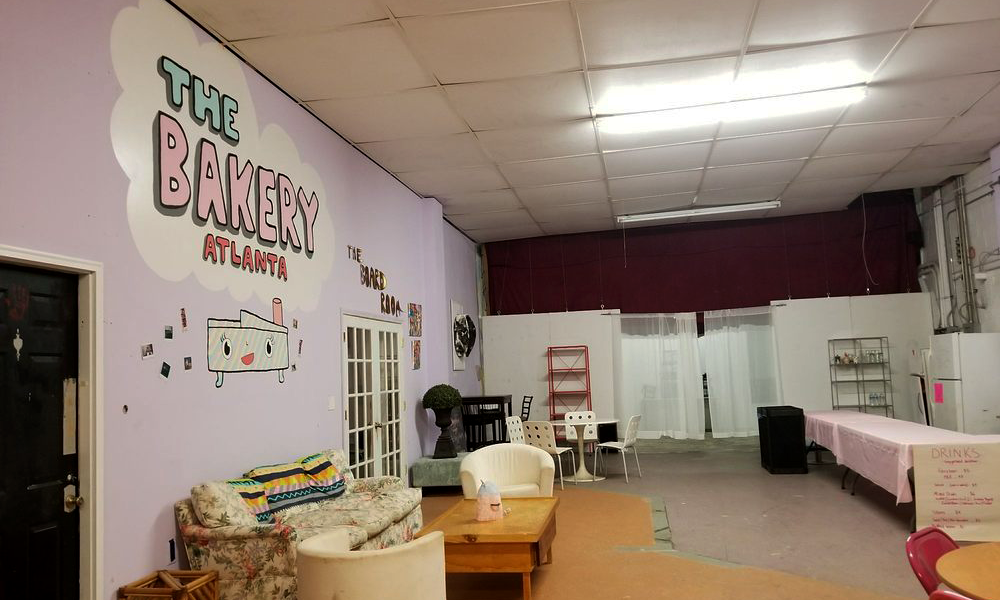 Inside The Bakery Atlanta.

The South Downtown district, then a burgeoning neighborhood, had been neglected for some years, and entities like Eyedrum—as well as Murmur Gallery and Mammal Gallery—were taking advantage of the low demand, and therefore low rental prices, to create spaces for cultural exchange and social engagement. These interdisciplinary gallery and performance spaces were only scratching the surface of a city itching for more inclusivity, innovation, and experimentation. But since then Eyedrum has lost their home. Mammal Gallery has moved to a new space south of downtown, into an up-and-coming arts complex called the Metropolitan Lofts. And many more independent spaces, like the Lucky Penny’s Work Room, have come and gone. However, there is a strong undercurrent of artists and creatives determined to support the community and hold space for each other.

I moved to Atlanta permanently a year later, in June 2017, and I realized then that the city is home to many individuals who see possibility and utilize the potential of vacant spaces—both the ones mentioned above and others. This drive is contagious, and I became inspired to initiate a project of my own—the Mediums Collective—alongside like-minded friends and collaborators to develop more creative initiatives and platforms for independent and interdisciplinary artists around the city. These organizations provide a strong foundation for the city’s vibrant soul, and their resilience and persistence shone brightly for some years in the South Downtown arts district before spreading farther south into the West End, Sylvan Hills, Hapeville, and East Point.

At the Bakery, if you are creative, resourceful, and determined to share your vision, you can find a seat at the table.

Early on in my time in the city, I came across a Southwest Atlanta warehouse space at an underground rave. There was very little detail inside the building—it was only a bare-boned concrete and steel skeleton with water and electricity. But this space was something special—it was clearly a queer and inclusive space for creative expression and resourcefulness. Not long after, I learned about a new DIY art and performance space called the Bakery. The first time I attended an exhibition there I immediately recognized the warehouse, and since then I’ve performed and volunteered at some events and attended many more.

The Bakery is operated by a team under the direction of Willow Goldstein, who was born and raised in Atlanta. After studying in Chicago and working in New York City for a number of years, she moved back to the city nearly four years ago to build a fresh creative space. “I want the Bakery to be a platform—a physical platform, a digital platform, a network as a platform,” Goldstein says. “We’re not a service, and we’re not a curator.” If artists want to use the platform, the first step is building a relationship with Goldstein and the team.

Goldstein brings together people with a wide range of interests who have a solid outlook on the world and how they want the world to look and feel. One of the most important qualities for an artist at the Bakery is the ability to see possibility and potential in unprepared spaces, and Goldstein wants to support the people who will do the work they set out to do. Whether or not it’s exactly in line with their initial idea is beside the point. At the Bakery, if you are creative, resourceful, and determined to share your vision, you can find a seat at the table.

Another space that has persisted as one of Atlanta’s go-to independent arts venues—despite many relocations—is Mammal Gallery. Co-founders Chris Yonker and Brian Egan met through music while they were in college, but soon found themselves without a space to practice. Yonker’s family friend offered them a 10,000 square foot office building on Northside Drive he owned, which he had been planning on knocking down. Naturally, Yonker and Egan saw the potential of this space to expand their practices beyond jam sessions and, at the same time, foster the community that had sprouted up around them.

Yonker was really involved in music and Egan in visual arts, and they wanted to tie those two worlds together and have fun in the office building, which didn’t have any rules. “We were really good at getting people out to shows, so much so that the neighborhood hated us for being there,” Yonker says. Eventually they got kicked out of the building, but Yonker and Egan wanted to continue operating a space—this time legitimately—and see if they could actually run a business that would support itself and support themselves as artists.

Yonker and Egan realized their roles as community leaders implied a responsibility beyond the walls of their gallery.

They persuaded the owner of an abandoned gay strip club downtown to let them use the venue for their projects, building their space on the values of radical inclusivity and artistic cross-pollination. They wanted to make it easier for people to meet other creatives and collaborate, seeing what could come out of it. “Music is art, visual art is art, everything is art,” Yonker says. “Why are we compartmentalizing the different spaces around the city?”

In addition to the interpersonal and artistic relationships they hoped to foster through Mammal, Yonker and Egan realized their roles as community leaders implied a responsibility beyond the walls of their gallery. “You can’t just throw concerts and art shows without figuring out how to be intentional in context of the community around you,” Yonker says. As the duo became more aware of the community that existed around them, Mammal evolved. Striving to create an environment where the more people contributed, the stronger the community became, Yonker and Egan began to ask questions like, “Does opening an arts organization speed up the process of gentrification?” 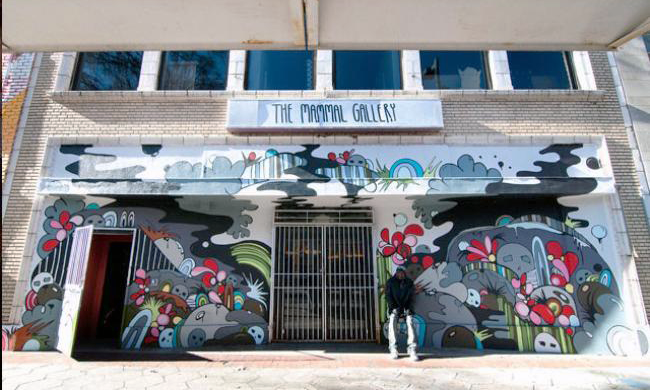 The Mammal Gallery in Atlanta, Georgia. Photo by Joeff Davis

This kind of thinking being done by Goldstein, Yonker, and Egan—of how to build spaces for each other, best support each other, and ensure everyone thrives in accessible environments—is the driving force behind Atlanta’s independent artists. This is what brought me here and what keeps me going when I’m feeling exhausted by the hustle of sustaining a collective and sustaining myself as a freelancer. These individuals are just a few of the many like-minded people in Atlanta who are cultivating inclusive communities and promoting meaningful and lasting relationships between artists and audiences.

Atlanta is a city with a rich history of grassroots arts and civil activism, and the independent scene that’s been developing over the last decade feels right in line with that. It’s important to stay conscious and considerate of the interconnectivity between art spaces, community spaces, and neglected lots and buildings; between artists, audiences, and neighbors; between disciplines, between platforms, and ultimately between each other. If we want the city’s arts and culture to continue to thrive, we can all learn something from the work Goldstein, Yonker, and Egan—among others—are doing. We can remember that we are all sharing the same space, and that if we have the opportunity to do something great, it’s important to invite others along for the ride. We all only get opportunities with the help of others who see potential in us and in the spaces we use to share our work. The more we all contribute, the stronger we become.