Entering the spacious theater where Mariela en el desierto (Mariela in the Desert), written by Karen Zacarías, was playing at the LATC brought me face to face with a magnificent form of a retablo, a sort of altarpiece to the story that would unfold: a skewed, seemingly floating blue barn, a large rustic table, an easel with a painting—its back to the audience— and a large bed filled with Mariela’s incapacitated husband, José (played by Aurora Theatre’s Producing Artistic Director, Anthony P. Rodriguez). Aurora Theatre/Teatro del Sol (based in Lawrenceville, Georgia) and Director Tlaloc Rivas brought Encuentro 2014 an exquisite piece about the nature of art, creativity, and love.

In 2011, Aurora Theatre created Teatro del Sol as its Spanish language branch, producing theater in Spanish with English supertitles. Its mission is the preservation of the Latino cultural heritage in the North Georgia area, including Atlanta. Gwinnett Country, home to Aurora Theatre, is considered the most diverse county in the Southeastern United States and Teatro del Sol is dedicated to be a home for the Latino arts and culture of the community. Teatro del Sol’s production of Mariela en el desierto was first produced in April 2014. 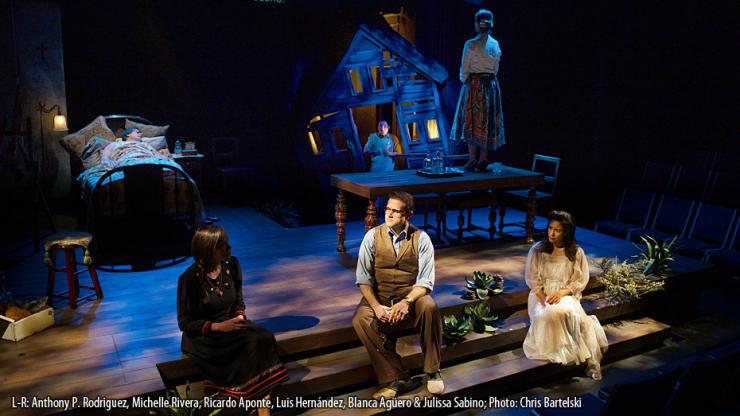 Mariela, played with elegance by Blanca Agüeros, and Oliva, her sister-in-law (Michelle Rivera-Huckaby), enter and suddenly, the retablo takes on unexpected life. The play is set in a Mexican desert in 1951. Mariela takes care of her ailing husband José, a painter of now diminished fame who moved the family to the desert years ago because he saw it as the origin and muse for all art worth making. Instead, in the ensuing years, the desert has only inspired loneliness and spiritual isolation for this family, especially since the death of their younger son.

As José’s health continues to deteriorate, Mariela telegraphs a lie of monumental proportions to her daughter Blanca, a talented and blossoming painter, so that she will return home. Blanca arrives shortly thereafter, expecting to attend the funeral of her father. To everyone’s surprise, Blanca has brought her boyfriend—a Jewish-American Art History professor. And thus, this play, begins to unfold the conflict of a daughter who resists her father’s notions of art and her mother’s silence, and the conflict of a mother resigned to having chosen her family (caring for both a sickly, perhaps autistic child and a self-involved, narcissistic, jealous husband, and a failure as a painter to boot) instead of her own artistic development.

Flashbacks are used as a device to present portraits of each character, slowly revealing their complicated relationships with one another, with art, and with the desert. This is a family where there is love even in hate, as Mariela eventually admits to José. However, the resentments over each family member’s choices have only grown through the years. José has chosen the desert, “God’s canvas” (“El desierto es el lienzo de Dios") on which to create an artists commune; Mariela has chosen her family, in particular her son Carlos, whose condition resembles what we would recognize as autism today; Blanca has chosen the city, where she moves to attend the university and avoids returning to the desert that has claimed the life of her brother and almost her own. 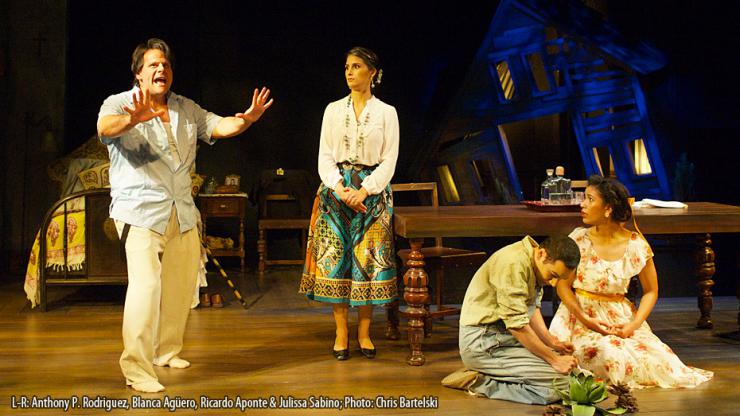 Mariela Salvatierra (we cannot miss the significance of her last name—Salvatierra, “the savior of the earth” in a barren landscape) has given up some dreams of her own. We find out through the course of the play that her own husband sabotaged what could have been a successful career by lying to her about Diego Rivera’s appraisal of her work. José uses Mariela as a pawn for his own advancement in the social scene of Mexican muralists and expressionist painters. He asks her to pose nude for Diego, which she agrees to do in exchange for Diego posing nude for her as well. It is a transaction she is willing to accept if it is played on equal grounds. However, José is too insecure to let it play out as such. He prefers to give Diego his wife in exchange for a space in his circle of influence. As it turns out, Mariela and José have opposing views on Art; as her son Carlos watches the painting Mariela has finished in secret to complete José’s commission for a gallery exhibition at the National Museum, Carlos says, “He paints the outsides; this is the insides.”

...as her son Carlos watches the painting Mariela has finished in secret to complete José’s commission for a gallery exhibition at the National Museum, Carlos says, 'He paints the outsides; this is the insides.'

Mariela en el desierto explores the internal and external motivation for the production and realization of art. The dialogue between Blanca and her boyfriend Adam emphasizes this search for meaning in art. Should art tell the truth, or should art express beauty? Adam sees that both can be accomplished at the same time. Blanca doubts this assertion and yet in her disagreement with Adam’s assessment of Jackson Pollock, she affirms the validity of what she has doubted. For Adam, Pollock says nothing. For Blanca, there is great beauty in the strength of the brush, in the brilliance of the colors.

Adam also inadvertently reveals some of the difficulties Blanca has encountered in Mexico City: she has stopped painting after a highly successful sale of her artwork. But he also raves of her great talent. In fact, Blanca has accomplished what Mariela failed to do—to paint Diego Rivera, blindfolded and in the nude, with Frida Kahlo watching. Rivera, one of the most iconic figures of 20th century art, is laid bare, vulnerable, and under the gaze of a woman. It is a feminist triumph. Blanca is surpassing the dreams and hopes her own mother had when young.

However, Blanca must return to her bleak family home in order to find clarity for herself. The secret of the canvas that has been teasing us throughout the whole play, occupying front and center stage is finally revealed to Blanca. “The Blue Barn,” the winner of the prize at the gallery exhibition and the painting that has caused José’s “dry spell” to be a permanent crippling block, catches Adam’s eye. This is the work that José inexplicably spent his prize earnings to buy back. Adam having the opportunity not only to see “The Blue Barn,” but also to discuss it with its creator, would be the crown jewel in Adam’s book in progress, Of Mexican Expressionism. 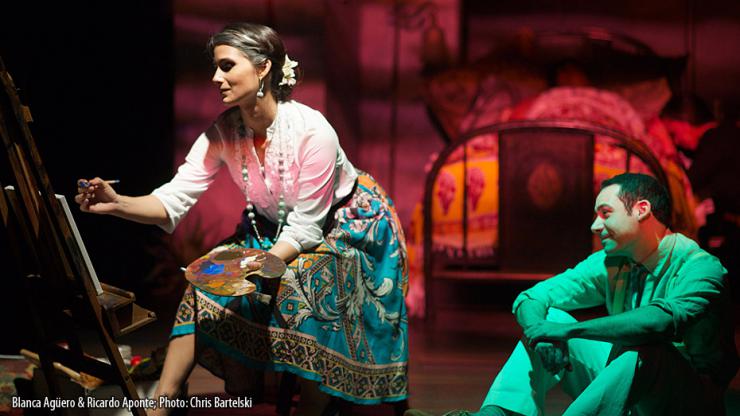 But we come to find out the truth is that Mariela, not José, painted “The Blue Barn.” And Diego Rivera immediately recognized it. José’s own sense of anger and inadequacy drive him to set their actual barn (which houses his studio) on fire. Unbeknownst to him, his son Carlos is hidden inside. Later, José stabs the canvas. All falls apart, and we return to the present, years later, as José is on his deathbed.

Teatro del Sol has succeeded in its direction and design to produce an excellent piece without losing the visual elements appropriate to a story about painters. A scenic design that emphasizes the traditional art of the retablo as well as hinting at more modern and contemporary pieces also contributes to the beauty of the text. The talented cast, even with their diverse accents (which can be distracting at first), is able to take us into the world of the play with ease. In my view, all parts fit together to highlight a gorgeous text. Mariela en el desierto is a fantastic philosophical meditation on art and women artists obscured by the ambition of their partners, inhibited creativity, truth, beauty, and the sacrifices we make for our loved ones. The play leaves one with a strong sense of having watched a work of art in defense of the value of making art.

Yes, I agree, Marisela. Eager to see this play have many productions---because it should AND so I can see it! Felicidades.

I LOVED reading this article. I was so sorry to miss this play--when I went to Encuentro it was no longer up--and so it was so enjoyable to experience the play through your essay, Liza Ann. And I have to say--these photos--the set design, lighting and costumes looked AMAZING. Bravo!

Enrique's Journey, directed and adapted by Anthony J. Garcia, is based on Pulitzer Prize-winning  book of the same name by Sonia Nazario. The third production of Enrique’s Journey took place at the LATC's Encuentro 2014, performed by Su Teatro.

Professor Jorge Huerta gives a short overview about the precedents that led to the historic and revolutionizing event, focusing on the growth of Chicano/a theatre festivals since 1970.