Recommended
Devising Our Future
HowlRound Theatre Commons
Most Discussed
Naming the Trope: A Deep Dive into the Harmful Uses of Disability Stereotypes in the American Theatre
Ben Raanan
Most Watched
A Conversation About the Making of Addressless
Tuesday 11 January 2022
Upcoming
Livestreaming a Convening: The Ellen Van Volkenburg Puppetry Symposium
Saturday 22 and Saturday 29 January 2022
Essay by
Chris
Gatchalian
Vancouver City Series 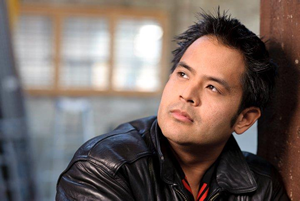 As a born and bred Vancouverite who's built his entire professional career here (and there aren't too many people like me around, Vancouver being a city of transients), I'm not equipped to assess being a theater artist in Vancouver against being a theater artist in any other city. My point of view is of someone who, inevitably, lives, breathes and exhales Vancouver, whose experience as a working playwright has been spent almost entirely in Vancouver, with only brief periods elsewhere (specifically, Toronto).

This piece, then, is not a scholarly account of the strengths and weaknesses of the Vancouver theater scene, but rather the (more or less) random impressions of an artist who's never left his hometown.

The most obvious and inescapable fact about Vancouver: its closeness to nature. We are draped by ocean on one side, mountain on the other; in between, nature and artifice coexist tensely, fearfully (city bylaws dictate that no building shall exceed a certain height, lest they mar one's view of the mountains). In this city, artifice is right to fear nature; seismologists have been warning us about the Big One for decades.

How does this relate to being a theater artist in Vancouver? Because theater here must compete with the lure of water and slope; indeed, earthquakes are an apt metaphor for Nature 's dominance over the city. Nature dwarfs Art, so the theater artist in Vancouver is from the get-go a loser, or at least impractical; only a kook would choose such a career in a city where theater invariably fights a losing battle.

But there's something to be said about kookiness; perhaps somewhat more often than non-kookiness, it leads to brilliance. Despite the fact that British Columbia artists have historically been, and continue to be, the most underfunded in the entire country, many of Canada's most acclaimed  playwrights have been or are based in Vancouver: Morris Panych, Aaron Bushkowsky, Marie Clements, Lucia Frangione, Sally Clark, Joan MacLeod, Kevin Loring, Marcus Youssef,  Kevin Kerr, to name just a few. Four years ago, when I adjudicated applications nation-wide for a Canada Council for the Arts playwriting grant, I was struck by what I have since termed the “Vancouver aesthetic” demonstrated by West Coast playwrights—a freer, more expansive style of dramatic literary expression than what one usually sees from central Canadian playwrights, who generally write in a mode I call the “Toronto aesthetic”—realistic, well-made, conventionally structured. (Now, before you bash me for what I admit is an extraordinarily sweeping, rough, and rash binary, remember that I make no pretence to scholarly precision.) If environment does indeed influence aesthetic, the conclusion is clear: Vancouver's lush physicality—and the general indifference of the populace to theater that this entails—brings forth theater artists that are less constrained in their outlook by either expectation or tradition.

Which leads me to this fact: that so-called “non-traditional” theater (i.e. collective creations and site-specific work) is what has truly flourished in Vancouver, lifting our theater community's reputation a thousand fold over the last decade and a half. Visionary companies like Electric Company, Theatre Replacement, Boca del Lupo, and Neworld Theatre have birthed extraordinary works that explore outdoor space, our relationship to new technology, and extreme micro-theatrical intimacy. It was an ingenious way of creating positives from negatives: a shortage of performance venues, and the reluctance of Vancouver audiences to spend their time inside a theater when the weather in “the most beautiful place on earth” (see our license plates) is cooperating.

So where does this leave bookish, text-based, language-based playwrights like myself? Again, being text-based playwrights in collective creation land requires kookiness, and while kookiness doesn't always, or even often, lead to brilliance, it does lead to thinking, and creating, outside the box—i.e. finding the untapped potential in language; playing with or subverting chronological time; straddling that sometimes fine line between social engagement and agitprop. And, thankfully, there is support—and I must say very good support—for playwrights and new (text-based) play development:  Playwrights Theatre Centre, for me at least, has been a compassionate, rigorous, reliable source of guidance and grounding. And theater companies like Pacific Theatre, Touchstone Theatre, Solo Collective, the frank theatre company, and even our big mainstream theater, the Arts Club, have, of late, been regularly programming world premieres of text-based plays.

Cultural diversity is a necessary property of any major North American city, and in the last fifteen years Vancouver's theater scene has certainly made inroads on this front, with professional companies such as Neworld Theatre (intercultural), urban ink (Aboriginal/intercultural), Full Circle (Aboriginal), the frank theatre company (queer), and Realwheels (differently abled) boldly diversifying Vancouver's theater ecology. Considering that just two decades ago Vancouver's theater scene was widely ridiculed for its stodgy, conservative  WASPishness, this is a remarkable development, and one that reflects the city's current and future demographic reality: in four years, visible minorities will climb to over fifty percent of Vancouver's population.

Vancouver is pioneer country, joyously unsettled in its theater practice.

Unlike Toronto, a much older city with a long and rich theater history and a bona fide theater establishment, Vancouver is pioneer country, joyously unsettled in its theater practice. The un-joyous fact that we live on occupied land, on un-ceded First Nations territory, is reflected, I think, in the indeterminate climate in which we operate—a climate that makes questioning inevitable and necessary. Living in a state of unknowing—will we get an audience? Will we get enough funding? Will there be an earthquake?—is, for better or worse, what has created the Vancouver theater artist: rugged, questioning, multitasking, and pioneering.