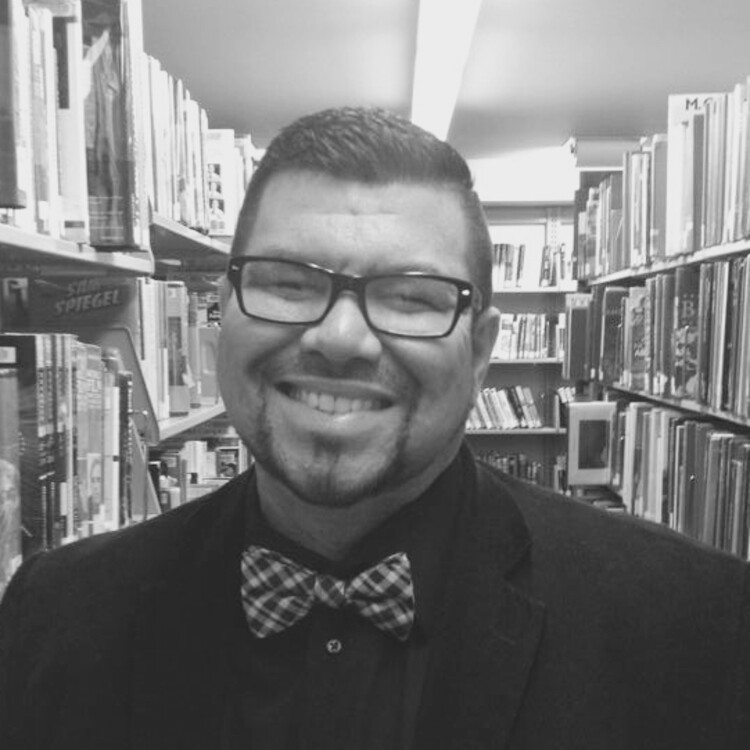 Pedagogy Notebook is a recurring blog series that serves as a pedagogical resource for educators and scholars looking to incorporate Latinx theatre into the classroom. In Pedagogy Notebook, artists, educators, and scholars share their process and work in the classroom, plus overall reflections on their pedagogy. This series offers a glimpse into different methods of engaging with and teaching Latinx theatre at the university level.

Theatre can be very conventional. The black box can be very suffocating. I try to create space where I can dance freely.—Virginia Grise

Background
Since 2014 I have been teaching at SUNY Oneonta in the Department of Africana and Latino Studies Department. Every fall I teach a course titled “Latinx Theatre and Performance.” An upper division course, it is usually composed of about eleven to fifteen students, mostly majors and minors in Africana and Latino Studies, and students of color. The small size allows us to engage with each other effectively. Blurring the boundaries between Theatre, Performance Studies, and Latina/o Studies, the class focuses on how Latinx communities use theatre as a form of art and resistance, and how performance functions in formal and everyday ways. The course emphasizes how bodies are used in and as performance, as a means to contest uneven power relations, redefine borders, and move towards social justice. Through an interdisciplinary lens we study staged Latinx performance, paying attention to the politics of race, class, gender, and sexuality, as well as the function of performance and the theatrical in Latinx communities, including rituals, protests, drag performance, dance, SWAPA, performance art, home altars, and funeral processions.

The classroom should be, and can be, a space of healing and community building.

My pedagogical inspirations for this class are Theatre of the Oppressed, women of color feminisms, and Chicana performance. In particular, I am inspired by Chicana playwright Virginia Grise, who visited our campus in 2015 and spoke about the relationship between writing, the body, and performance. As Grise’s words in the epigraph above suggest, the conventionality of theatre can be limiting. Her ideas are instrumental in my teaching in terms of breaking boxes and conventions and helping the students find liberation through their bodies and stories. Like Grise, I want to create a space for students where they can explore, imagine, try-out, and “dance.”

Pedagogical Tools
The classroom should be, and can be, a space of healing and community building. A pedagogy based on women of color feminist teachings makes affect, memory, justice, and corporeality central to the both the process and outcome. In this effort, a decolonial approach is necessary, pushing students to rethink the colonial scripts they have inherited, and which we as educators reinforce in the classroom. How do poetry, theory, and politics take shape in the classroom? A Latinx theatre class is the perfect place for that marriage of form and content to unfold. I usually begin the class with some activities I learned from Dr. Jessica Lopez Lyman and the Bodies in Space: Flow/s conference archive. These community building and body exercises are instrumental in building trust and asking students to move outside their comfort zone, asking them to connect with or return to their bodies, to recognize the power and symbolism of these, and to learn to speak from them. As bell hooks writes in Teaching to Transgress, “those of us who are trying to critique biases in the classroom have been compelled to return to the body to speak about ourselves as subjects in history. We are all subjects in history.”

SWAPA and Ritual
One of these strategies is SWAPA or Spoken Wor(l)d-Art-Performance-As-Activism, a pedagogical tool developed by decolonial Chicana feminist Chela Sandoval. As the name suggests, SWAPA combines performance and activism, and is a pedagogical tool that can build community and inspire activism. It is based on women of color feminist tenets, especially the writing of Gloria Anzaldúa. I have also used SWAPA in non-theatre courses as a teaching tool. In a typical SWAPA process, students write a one to two page response to a text or a performance, and then read or perform what they wrote in front of the class. The others, the “witnesses,” write their brief reactions—words, concepts, doodles—on index cards. Upon finishing their SWAPA, the witnesses share their reactions using “I” statements, and not passing judgement, but rather learning to hear what Sandoval cites as the “meta-witnessing consciousness,” paying attention to how the SWAPA made them, the listener, feel and think. They are feeling for how their own bodies ingest this new knowledge. As the semester progresses, all students perform their SWAPA, and a collectivity emerges that is often unexpected and transformative. As Sandoval and Peter J. García assert in their essay in The Un/Making of Latina/o Citizenship: Culture, Politics, and Aesthetics, “SWAPA disrupts aesthetic boundaries by weaving history, performance, and autobiography. The crónica, autohistoria-teoría, biomythography, and SWAPA are all storytelling methods that press against traditional forms of scholarship and performance.”

Final Projects
As the final project, I ask students to create an original work that includes audio, visual, and original writing. It can be an adapted scene from a play, a performance piece, or a SWAPA. Usually SWAPAs require just reading or performing the piece in front of the class, however for the final projects, I suggested that they add music, props, or other creative additions.

The first performance of the night was by a young Black woman, Nytasia, a sophomore. Opening up the space and setting the tone, for her final performance she built an altar as the rest of us witnessed, inspired by readings we had done on the history and ritual of Día de los Muertos, and on altars, by Laura E. Pérez. To begin, Nytasia performed her SWAPA where she talked about her identity and her past. Then she created an altar, bringing elements of her life that she wanted to remember and honor as part of who she was. She played a music video in the background as she built. She wrote about those things she wanted to leave behind, but also recognized and honored that these things had shaped her. She was “taking inventory” in Anzaldúa’s words. Nytasia then asked others in the class to add what they wished to the altar. Witnessing this powerful and transformative performance generated a sacredness we needed in the classroom to begin the final day of performances, and were able, as Micaela Díaz-Sánchez reminds us in Performing the US Latina and Latino Borderlands, to “bear witness to ritual (re)membering.” Nytasia’s piece was a manifestation of Sandra Cisneros’ epigraph above, about the sacredness of artmaking.

Adriana, a first-year Chicana student, also gave a transformative performance. Under dim lights, in front of the mirror, she read a SWAPA about her childhood, abuse, pain, and her family. Towards the end of the piece she stood up, took layers of clothing off, until she was standing in just shorts and a tank top. On her bare skin, her chest, legs, and arms, there were pieces of masking tape with negative words that described who she or others once considered her to be. As she continued to read her SWAPA, she removed the tape from different parts of the body, and underneath was a different word. That word expressed a newfound sense of herself. Her SWAPA was ultimately about forgiveness and empowerment. Her body was literally a stage and a canvas. It was one of the most powerful performances I have witnessed.

Reflections and Directions
Each semester, the class transformed. Together we better understood the power of intimacy, community, dialogue, discussion, and the body, within the classroom. With the students on board for the journey, trusting in the process, we learned content as we learned about ourselves. I was attentive to pedagogy at every moment, conscious of my own performance as “professor,” as classroom community member, and as a queer Chicano. One student who has taken several classes with me reflected that this was the hardest class conceptually and emotionally, because I was asking them to go to places that were challenging. My job was done.

Centino, Nicholas. 2016. “Dreaming of Adelita: A SWAPA on Spiritual Activism in the Wake of Child Loss” In El Mundo Zurdo 5: Selected Works from the 2015 Meeting of the Society for the Study of Gloria Anzaldúa, edited by Domino Renee Perez, Larissa M. Mercado-López, and Sonia Saldívar-Hull.

Sandoval, Chela and Alvarez Jr., Eddy Francisco. (forthcoming) “SWAPA as Sacred Practice”. In Voices from the Ancestors and Beyond: Chicanx and Latinx Spiritual Expressions, edited by Lara Medina and Martha Gonzales.

Sandoval and Peter J. García. 2014. “Decolonial New Mexican@ Travels: Music, Weaving, Melancholia, and Redemption, Or ‘This is Where the Peasants Rise Up.”’ In The Un/Making of Latina/o Citizenship: Culture, Politics, and Aesthetics, edited by Ellie D. Hernández, Eliza. Rodriguez y Gibson.

This is really powerful work!

Thank you so much!

Thank you for reading the article. I am glad you enjoyed it.