Jihad Jones and the Kalashnikov Babes 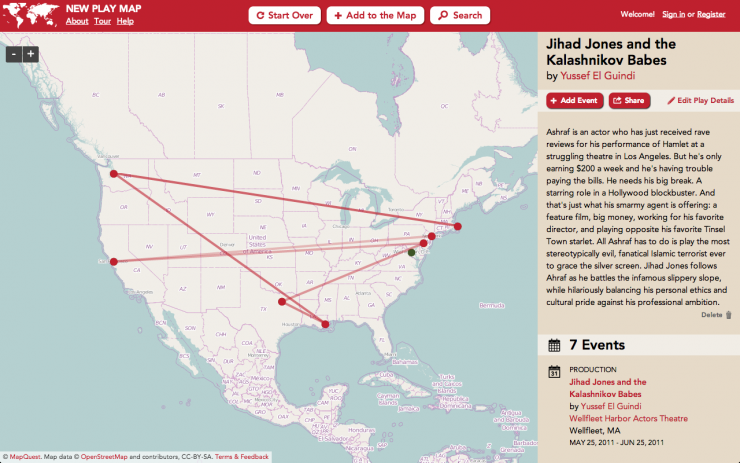 (Click on the image above to view the New Play Map journey of Jihad Jones and the Kalashnikov Babes by Yussef El Guindi.)

1. As the play developed, how did the different communities (creative team, location, audience) influence the development of Jihad Jones and the Kalashnikov Babes?
The theater that first tackles the play will invariably have the greatest impact in terms of letting you see what you’ve written—what kind of beast you’ve wrought. Lots of adjustments were made when Golden Thread Productions and Mark Routhier first produced/directed it. I made quite a few cuts, etc. When Seth Rozin and InterAct came on board, there was more fine-tuning, and yet still more fine-tuning with Tina Parker’s production at Kitchen Dog. But I should also say that with the latter two productions, I chose to come mid-way through rehearsals and not during previews/opening only because I wanted to come when there was still time to make adjustments, and influence the direction of the production.

2. Did you rewrite after the first premiere? Second?
To continue with my remarks from the previous question: major adjustments were made after the first premiere, because I was there to gauge audience response. Given that the play is a comedy, gauging audience reaction was, of course, essential. With the other two productions, I depended more on the directors emailing me with suggestions/questions, since I was present for rehearsals for only a short period of time.

I should say that I recently saw the play in Alaska and ended up making more cuts (too late for that production, but not for publication). So six years after it was first produced, I’m still making adjustments!

3. What’s one valuable experience you had during the NNPN Rolling World Premieres that made a significant impact on your process?
This idea of an NNPN Rolling World Premiere is invaluable. It’s such a luxury to see a fully produced play and then still be able to make changes for a scheduled upcoming production. There have been a couple of plays since where I wished I had that luxury. One play in particular only became fully seen and clarified in my writer’s eye on opening night! I suddenly realized—with horror—that I didn’t need one particular scene in the play, and that a couple of other scenes that I had mistakenly cut could be re-introduced. All this realization on opening night (my apologies to the wonderful theater and director for my very late understanding of my own play)! That’s when I wished that particular play was part of an NNPN Rolling World Premiere.

4. How did the different communities interact with/approach the racial/gendered themes of Jihad Jones and the Kalashnikov Babes?
I don’t recall differences in approach to this question, to be honest. I think when it comes to comedy, all the focus was on making individual comedic beats work as comedy. Yes, each cast and director brought a different take to the play—which was so instructive, to witness in such a short time different approaches to the same material. The experience was a mini-tutorial in the craft of playwriting.

The thing is, the NNPN Rolling World Premiere process is a little similar to what a playwright experiences with multiple workshops of a play. With the added bonus, of course, that instead of a staged reading, you get full productions. Which one is very grateful for! But that is basically it. Rehearsal, work out problems, presentation before an audience, which further illuminates the play for you and helps you to make even more changes. As I said, what is invaluable about NNPN is that you have three theaters committed to doing your play.

In regards to “mini-tutorial in the craft of playwriting,” I should amend that to say “a mini-tutorial in the craft of comedy writing.”  It was instructive to watch the same comedy handled by different casts and directors, each offering different rhythms and approaches to the same comic beats. It is startling how fragile comic material is. I am perhaps stating the obvious in saying that you will get very different results with each set of new actors and directors. The exact same joke will elicit very different responses depending on the actor, and the direction given. It was a tutorial for me in that regard, watching that unfold. Drama is not quite as fragile as comedy is. Something as delicate and important as rhythm/pacing can radically alter everything. Drama can take that change more easily than comedy can.

As far as the issue surrounding the matter of race and religion brought up in the play, I can’t say I was involved in that many discussions. The actors and directors may have tackled that question during those times when I wasn’t there—and I was only present for a few days with the two latter productions. But even with the first production, our main focus was on making sure the comedy worked as a comedy. Again, there is very little wriggle room with comedy. It either works or it doesn’t. All our energy went into making sure it did.