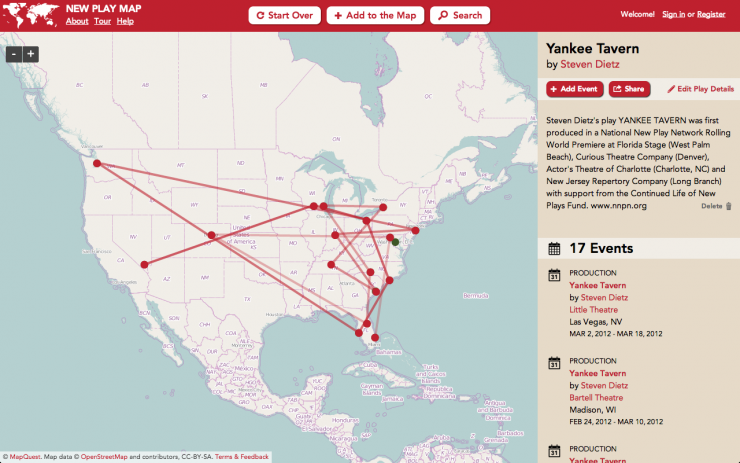 (Click on the image above to view the New Play Map journey of Yankee Tavern by Steven Dietz.)

1. How did the different communities (creative team, location, audience) influence the development of Yankee Tavern?
The influences were lasting and profound. All theater is local. That is what is inspiring and instructive about the National New Play Network Rolling World Premiere, as opposed to the notion of a "national tour.” In the case of Yankee Tavern, this is a very political play (hidden inside a thriller structure) and so the politics of each city/community were engaged in differing ways. I was most strongly involved in the productions at Florida Stage and Curious Theatre Company—but followed the feedback in the other theaters as well. All of this info was crucial to me when I then directed a subsequent production at ACT Theatre in Seattle.

2. Did you rewrite after the first premiere? Second?
Yes. Of course. And after the third, fourth, fifth, and right before the publisher went to print with it. Do people really answer "no" to this question?

3. What’s one valuable experience you had during the National New Play Network Rolling World Premieres that made a significant impact on your process?
As soon as you have a second production, the first production (however great) is suddenly less precious. Less special and fragile. This emboldened me to keep leaning on the play. To be the last one done with it.

4. What did you learn from your first National New Play Network Rolling World Premiere that you were able to put into practice in your second?
Let the productions differ. Let them pull the play in the direction that best suits their own company, theater, venue, etc. This is not the time to be in search of the definitive production (which I don't believe in, anyway) but instead the time to have the play tested by various deeply-invested collaborative teams. This can be delicious; this can be harrowing. But in any event: it was a godsend to me as a playwright.