Playwright Sean Cunningham has worked on and off since 2009 with songwriter Michael Friedman, director Alex Timbers, and a raft of designers on a piece of early 20th century meets early 21st century apologia political mashup theater about the legacy of Herbert Hoover as seen through the lens of Elvis Presley. The result is Here’s Hoover! The Historic Herbert Hoover 2014 Comeback Special, which recently concluded a brief run in New York City. And Herbert Hoover’s return, replete with leather, works like gangbusters.[caption] 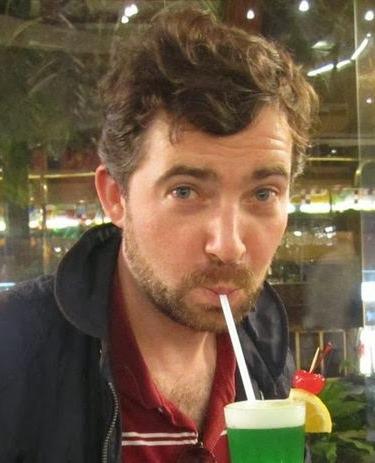 Five years ago these busy men began to consider the theatrical possibilities in the career of American president Herbert Hoover, a man with conservative Republican instincts who had the bad fortune to preside over the initial years of what deepened into the Great Depression. Timbers wondered what they would find if they looked at this profoundly uncharismatic guy through the frame of the famous 1968 Elvis Presley television “comeback” special.

The differences between the song-and-dance parties of Rocky on Broadway, Love’s Labour’s Lost, Bloody Bloody Andrew Jackson, and Here Lies Love—all shows created by members of this team—and Here’s Hoover! are arguably profound. But while the scale of the Abrons Arts Center is far from a Broadway venue, the same sensibilities are tapped to tell a story through humor, projections, and delicious anachronisms. Major figures from American history are interpreted through the style of one of the most charismatic pop performers of all time. In Here’s Hoover!, Depression-era conservative Herbert Hoover attempts to reclaim his legacy and perhaps run again. (Yes, Hoover is dead—suspend your disbelief.)

Initial Inspirations
The team wanted the piece to be “interactive without being cheesy about it.” The 2009 version was billed as “an interactive, rock-infused concert" when presented as part of the La Jolla Playhouse’s Page To Stage and The Edge programs. The 2014 version of the show had a thrust stage and the first few rows of audience members seated on pillows on the floor, occasionally pulled up into the action. This Hoover reaches out to touch.[caption] 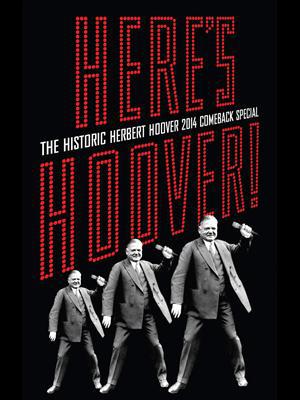 The format comes in color, in tone, and in rhythm from Presley. “Alex in particular was obsessed with the Elvis 1968 comeback special, one of the great television specials. Obviously there’s a lot of imagery that’s from it, uniquely inspired.” And Presley’s songbook is heard around the edges of tunes crafted by Friedman—“Love Me Tender” is suggested at one point. “Michael is into quoting a lot. He makes the songs his own.”

The inspiration for the entire team was Presley’s undeniable potent charm. Cunningham notes:

So what if Hoover had Presley as a model upon which to revamp his image? The team enjoyed playing with this impossible dream. “The craziness of Hoover saying: I’m just going to be unstoppable sexual charisma all of a sudden. I can teach myself to do what Elvis does. And we thought there was something kind of beautiful in that.”

Less is More
The brevity of the piece aided the revision process.

Because the show is only seventy-two minutes, we were able to run the whole thing a lot, and so you really do get to see the piece fit together which is very important with a musical. If you wrote an epic two hour forty-five minute musical, it’s going to be pretty late in the process before you see the whole thing together.

This Hoover self-presents as not only a pop performer, but also as the answer to the audience’s current troubles and economic woes. Cunningham elaborates:

I guess it’s to the benefit of the show and to the detriment of the national welfare that this economic state has gone on for a while. There is a sense that we can’t quite get over the hump; we can’t quite slip around it. There was a moment during the Great Depression, particularly when all the veterans were marching to Washington that we allude to in the show. Unemployment is over twenty percent, and suddenly people ask: What is there to believe in? It’s a weird intangible thing—national confidence—but it definitely matters. And Hoover certainly was not someone that inspired a lot of that.

The Flow
Making theatrical choices inspired by history informed musical choices as well as book details. The piece is set fifty years after Hoover died in 1964, yet hovers musically and visually in 1968 or so, allowing the lyrics and the music to evoke pop of the mid-20th century. Hoover is in middle age; the show draws upon the musical genres available at about the time he died.[caption] 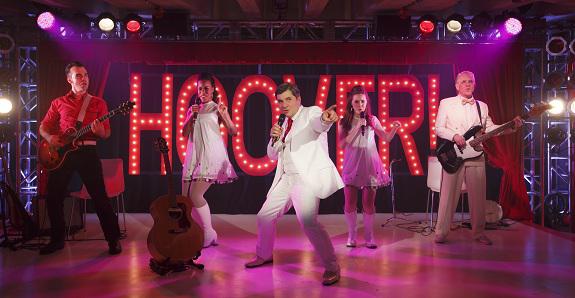 Is this an act of redeeming Hoover’s reputation? Not exactly, according to Cunningham. While the intricacies of the Hoover-Truman relationship in particular might make a wonderful musical in their own right, the creative team felt that might be a detour from the main story of Hoover’s evolution in this imagined world with a musical structure. “There was a lot of paring. But we really were obsessed with ‘this moment leads to this moment, and this moment leads to that moment.’ We didn’t want to digress too much in the structure.”

However, Cunningham agrees that the Hoover-Truman friendship was special.

He never had the same relationship with Eisenhower that he had with Truman. I don’t think Eisenhower had any particular use for Hoover. And Hoover lived to be ninety, lived over thirty years after leaving office; he outlived the key events of his life by decades.

On Changes
The show definitely changed during the 2014 run. When pressed for specific changes, Cunningham comes up with a few. “The biggest thing I can tell you is the monologue at the end, where Truman puts Hoover in his place.”

TRUMAN
No matter what you do, FDR will be the man who was President when America beat Nazi Germany and you’ll be the man who was President when the Great Depression hit. He was on the right side of history. You can argue the Great Depression wasn’t your fault or that you had the keys to a recovery, but it happened on your watch. You had some good ideas and I believe you meant well, but your actual response was ass. That’s right. Ass. Can’t you just be glad we made it through the Depression, instead of worrying about who gets the credit? Tonight was supposed to be about saving America but it seems like you just want to prove that Herbert Hoover is always right.

This monologue replaces an earlier one in which Hoover runs through his issues with the legacies of all other American presidents. Not surprisingly, Hoover feels as though he hasn't been given his due. Cunningham notes, “As a standalone piece it was great; as a piece of an overall musical, it screwed up the next scene.”

The Perfect, Game Performer
Damian Baldet played Hoover in 2009 and again in 2014, the one member of the company in both productions.

We were lucky enough to get him to do it again. He’s quite frankly fun to watch—he’s very commanding and he’s also very vulnerable. He plays guitar, he has a versatile voice, and he makes sound effects. Whatever weird thing you throw at him, he’ll make it work, or he’ll push to the point where you say ‘oh that just won’t work, but thank you for trying it.’

Here’s Hoover! has an onstage band featuring Harry S. Truman (Larry Tobias) and two female backup singers—one is Hoover’s wife Lucille (Erica Dorfler), and the other is Sheila, an intern (Talene Monahon), whose youth makes room for riffs on underpaid staff and social media. This anachronistic Hoover pronounces the latter “social meh-dee-ah,” and needs more Facebook friends. Cunningham notes that Sheila “allows Hoover to be a little more monstrous then he would otherwise be able to get away with. In his more desperate moment, there’s something sturdy about her.”

The boys in the band—Scotty (James Barry), DJ (Alex Boniello), and Wallace (James Nathan Hopkins)—had never played together before this engagement. Cunningham remarks, “We really did try to build a band. We have four people playing multiple instruments during the show as well as acting and singing. Even Erica, who plays Lucille, has a washboard solo, and Sheila has a little drum break.”

We really did try to build a band. We have four people playing multiple instruments during the show as well as acting and singing.

So What About Those Leather Slacks?
Two costumers, Paloma Young and Asta Bennie Hostetter crafted the look of the production, part 1960s rock show featuring sideburns for the guys and miniskirts for the gals. Truman’s entirely white suit is distinctive and powerful on stage and provides a strong contrast to the leather that Hoover changes into half way through the show. “Initially we had Hoover coming out as Elvis in all leather. And it was crazy. People thought: what the hell is this? We realized he had to come out as Hoover would have and then gradually evolve into more of an Elvis figure.”[caption] 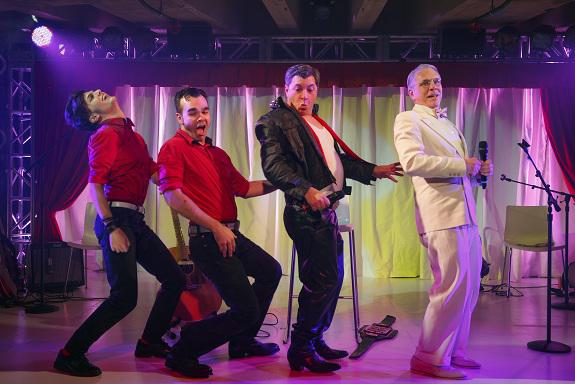 The next steps for the piece are up to their leader, the man with the initial inspiration. “Alex is the driving force here, clearly, which makes sense. As we get closer to a Presidential election, the show will only make more sense to people. And that’s very nice.”

Cassidy Dawn Graves writes about the anti-capitalist narrative present in Sweeney Todd: The Demon Barber of Fleet Street and the significance of producing the musical in 2018.

Ethan Lipton returns to his artistic home at the Public Theater in New York City to play with toys, musical storytelling, and space travel.