Beyond the Capitals, a project of the Center for International Theater Development, aims to create meaningful encounters between new generations of theater animators in Russia and the United States. Members of the theatre communities of four American cities are currently traveling to four different Russian cities; participant Christopher W. White sends back his impressions.

Abbreviated visits to distant cities necessarily produce mental impressions drawn in broad strokes. But such images can generate a powerful sense of the cultural topography, if not detailed maps. As part of the American delegation that constitutes Beyond the Capitals II—a project of Philip Arnoult’s Center for International Theatre Development—I have the pleasure of whisking through four different Russian cities over three weeks, with the goal of seeing as much of the cities, absorbing as much of the theatre, and meeting as many of the artists and makers as we can in our short time. The project, which began last year with a delegation of arts workers from four Russian cities visiting Baltimore, New Orleans, Austin, and my home city of San Francisco, is particularly interested in looking at how place influences the making of theater work.

Our first stop on this expedition: St. Petersburg. The city, often called the most beautiful in Russia, is a wonder: the long, unbending avenues lined with eighteenth- and nineteenth-century architecture are punctuated by graceful bridges, orthodox cathedrals, and grand theatres. We frequently heard people refer to it—often pejoratively—as a “museum city.” And perhaps, it seemed to us, the museum-like quality of the place did influence the work being made there—two strong trends we witnessed among the mainstream theatres included a devotion to classic Russian texts, and a painterly interest in the visual experience. 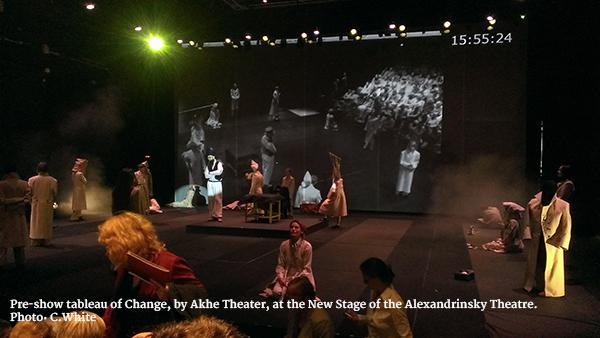 We saw two productions there, on two different stages at the Alexandrinsky Theatre, the Russian state theater of St. Petersburg. The first, Choice, was created by Akhe Theater specifically for the opening of the New Stage at the Alexandrinsky. This exceedingly high-tech theatre building is envisioned as a workshop for new work created by younger theatre artists. I got the impression that Akhe approached the piece with the eagerness of an auto enthusiast who has just gotten his hands on the keys to a souped-up sports car: “Let’s see what this baby can do.” The results were often visually stunning. A minute-long frenzy of activity opened the piece, during which the many performers (over a dozen) simultaneously performed fascinating movement solos. It was, frustratingly, too much to take in all at once. We discovered, however, that each solo had been captured by separate cameras, and, as the show progressed, each performer delivered a monologue as video of his or her solo was projected at the rear. The stage consisted of several separately articulated platforms on hydraulic lifts, which the production constantly manipulated. The effect was fascinating, but not unlike watching a live-action version of Super Mario Brothers.

Even as Avimskaya works to find a new space, she confesses her exhaustion and frustration at the slow pace with which change is coming to St. Petersburg.

Several days later we had the opportunity to speak with Pavel Semtchenko and Vadim Gololobov, from Akhe. They discussed their approach to creation, which is informed much more by visual art than by the Russian theatrical tradition. In making what they refer to as “painter theatre,” they begin at the table in their workshop, discussing ideas, sketching, and plotting. Though Choice was informed by Dostoevsky’s Crime and Punishment, image and structural concerns drove the evolution of the piece. 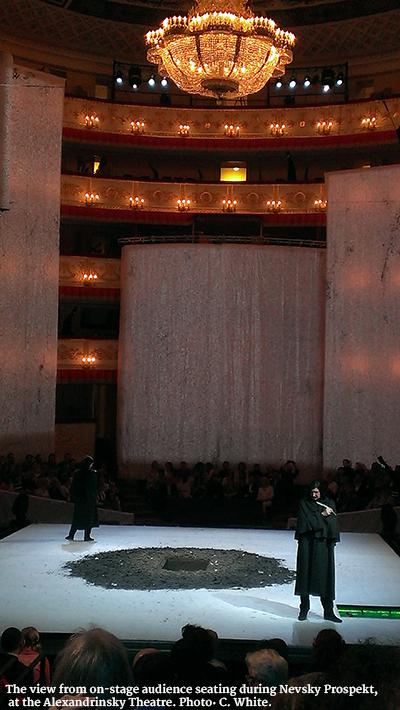 The second piece, Nevsky Prospekt, played in the main theater of the Alexandrinsky. In this piece, inspired by a Gogol short story, Valery Fokin (Director of the Alexandrinsky), invited several younger directors to join him in co-creating the piece, merging Gogol’s observations of life along the titular main thoroughfare with contemporary ones. Rather than placing the action of the play inside the confines of the proscenium, the directors built a platform squarely in the center of the orchestra section; audience sat on either side, on risers built onstage or in the rear orchestra. For those of us sitting onstage, the ornate, gilded house became the backdrop for the performance. Long vertical projection screens cascaded from the high balconies; camera operators raced around the performance space, providing live feeds of actors’ faces that stretched several stories high.

Both these pieces placed strong emphasis on the visual experience of the work and were able to achieve remarkable effects—largely because they both seemed to have nearly unlimited resources of money and labor. They also both claimed classic Russian texts as foundations, but in an incidental way that suggested they served to provide the formal experiments with the imprimatur of traditional roots. The experimentalism teetered towards feeling belabored: contemporary despite itself, or perhaps in spite of the governmental money to which the work was tethered.

A conversation with Andrey Moguchy, an internationally renowned director whose artistic restlessness provided the impetus for the creation of the New Stage at the Alexandrinsky, confirmed the impression that this style has its heels dragging in past decades in Russia. In the ‘90s and early ‘00s, Moguchy was at its vanguard, and his Formal Theater traveled the world festival circuit. In recent years, however, he’s become disillusioned

with the director-driven tendencies of such work; he’s stopped creating new pieces with the Formal Theater, instead convening a small group of younger directors for an inquiry into whether their profession still has validity in the contemporary theatre.

Another force working in opposition to the dominant trends in the state theaters of St. Petersburg is our host in the city, the indefatigable Milena Avimskaya. Following a sociological study of St. Petersburg culture, Avimskaya concluded that the dearth of independent theater constituted a major void in the city. Seeing nobody stepping into that gap, she decided to do so herself, starting ON Teatr in 2008 and moving into a basement space with three small performance spaces in 2011. Focused on giving young directors the chance to develop new work in a city that provides few such opportunities, Avimskaya has rapidly changed the tenor of theater in St. Petersburg. Numerous twenty-something directors have rallied around the theatre, which features dozens of shows in repertory, often presenting two in an evening. Avimskaya won an award for best theatre producer in St. Petersburg last year, no small feat for a woman in a theatre community unabashedly dominated by men. (At the opening of the New Stage at the Alexandrinsky, tours of the space were led by a coterie of male directors, while women were relegated to wearing airline-attendant attire, silently carrying placards for tour groups to follow). 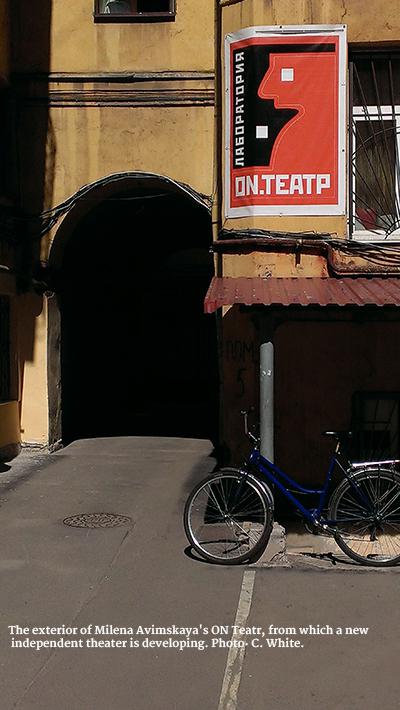 Several people in St. Petersburg spoke of the huge influence Avimskaya has had on theatre there in the short time she’s been developing her company. Her commitment to changing the culture continues unabated. At a reception she organized with our group and several directors from ON Teatr, she exhorted her protégés to listen closely to the descriptions of our work, particularly those of us creating immersive or socially engaged theater. They assured her that they were indeed pushing their work in those directions—or at least in directions that cut across the grain of the entrenched theaters. Indeed, the work at ON that we saw, though created on zero budget, had a youthful passion and strongly beating heart that only faintly pulsed in the opulent work at the state theaters.

Even as Avimskaya works to find a new space, she confesses her exhaustion and frustration at the slow pace with which change is coming to St. Petersburg.

But single-handedly changing the culture of a large city’s theater community takes its toll. Recently, ON Teatr was given notice that they had to leave their space; apparently the new upstairs neighbor, a high-ranking general, did not appreciate the noise generated by the theater’s young, enthusiastic audience. Even as Avimskaya works to find a new space, she confesses her exhaustion and frustration at the slow pace with which change is coming to St. Petersburg. She soon plans to move back to her native Moscow, guiding ON Teatr from afar. Whether the changes she has wrought in Petersburg will take root and flourish remains to be seen.

I'd add a thought about the benefits of robust federal support, which we currently so sorely lack in the United States. Artists should be able to make big work (and receive salaries, for example) and have new tools and technology made available to them, especially in schools. Despite the flaws of the old NEA, and there were plenty, it was a place of intersection for a national arts community in the United States, and we've not succeeded in rebuilding it. I call for the U. S. to return to robust federtal support for the arts.

On the other hand, we have heard some evidence of political intervention and a repression of freedom of expression in a couple of places here, as well as a lot of denial, and there's a new rating system on theater, so course there's self-consorship, too. We can't ignore that tension.

It is wonderful to be so immersed in a thriving theater and arts community. We were in St. Petersburg for Museum Night when most museums are free and open very late. At midnight we saw long lines of people in different neighborhoods waiting to get into museums of all kinds. I like being among enthusiastic and full audiences.

Great job of capturing the experience and putting it in context Chris! Can't wait to read what you have to write about the visit to the Drama Academy, where the museum approach reaches its apogee - the chair of the acting department asserts that there are only two playwrights who need to be studied: Chekhov and Shakespeare.

That's a great point, Lisa! I wish I had room to fit it into this post. My next one will be about Yekaterinburg, which was such a different experience. They were very proud of the counter-cultural tendencies deeply embedded in the arts culture there.