Recommended
Devising Our Future
HowlRound Theatre Commons
Most Discussed
Designing Collaboration: In Search of a Taxonomy of Collaborative Methods
Emily McConnell
Most Watched
The Gathering from the CrossCurrents Festival
Wednesday 4 May to Saturday 7 May 2022
Upcoming
Livestreaming a Conversation: Suzan-Lori Parks' Watch Me Work
Monday 30 May 2022
Essay by
Chris
Kamenstein

Actually, I think process is better in a vacuum and product is better with an audience, or vice versa, because product is a natural distillation of process, but wait, I can’t decide if that’s true, it’s probably not, I take it back, product is separate from process and is overrated, except that I love watching good product and it’s the only thing that matters, really. I take back my take-back and now am making a new statement: process versus product—what a clusterfuck.

In the interest of theater dorkiness—of which I am an advocate—I’m going to talk a bit about the process by which Goat in the Road created Numb, an original work about the origins of nitrous oxide and anesthesiology. Maybe it will strike a cord.

Goat in the Road (GRP) is a New Orleans-based theater ensemble that makes original work. We choose projects through group conversation among our artistic directors. One of us has an idea, pitches it, and then everyone decides whether or not it has potential. At first Numb was not called Numb; it was called “The Pharmacy Museum Thing.” All we knew was that we wanted to do something with the New Orleans Pharmacy Museum—we just didn’t know what. 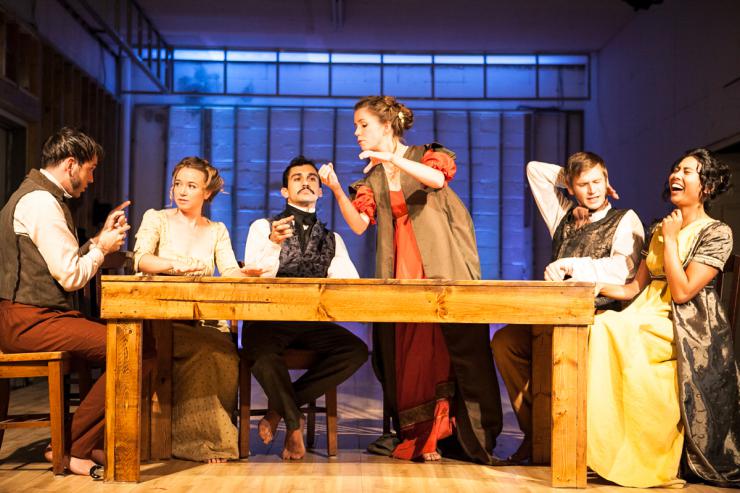 Here’s how it goes, except it’s never as smooth as this post makes it seem.

First, we research. Once GRP’s artistic directors agree on a show idea, we search for source material: works of scholarship on the subject, book recommendations from experts, movies, museum exhibits, etc. GRP strives to approach familiar subject matter from new angles, and the research phase offers us the intellectual resources to find original points of view. The Pharmacy Museum was one of the first places I visited in New Orleans and remains one of my favorite institutions in the city. The history of medicine is the history of how we view our own bodies, and the museum gives a vivid picture of nineteenth century New Orleans: the health and social challenges, gender dynamics, and the solutions for pain relief. The museum also has a small section devoted to the discovery of anesthesiology, and I felt there was something inherently interesting, and very human, about the search for painlessness.

Second comes design limitation. This develops from the research and subject matter, but is not necessarily related to any particular text. For our 2011 show Instant Misunderstanding, we decided early on that the main set piece would be a twelve-foot tall glowing monolith. This idea developed from some notions about technological fear and informed the text we would later write, but the monolith was created far ahead of the writing itself. For 2010’s Our Man, we put the show in a 5x5x5 plexiglass box before we decided that it would be about the inside of Ronald Reagan’s brain. Many artists employ the use of design limitations; we have found it helps define our approach to the research material, clarifying the subject matter while simultaneously producing moments of friction and humor that might not otherwise be found. Most of all, the limitation demands that we solve problems in unique and theatrical ways. For Numb, we decided early on to use almost no set or props, relying on sound, music, costumes, and lighting to create the atmosphere and mood of the piece. We also knew that we needed a long narrow space—a place where multiple levels of movement could exist.

Third is rehearsal and laboratory. In January 2014, we spent a month in the room with our ensemble, sifting through research material and developing text, movement, song, and wacky chair antics in preparation for a small showing. The showing was an hour-long selection of new material for an invited audience, a sort of Chinese-food menu of theatrical bits. The audience took notes and afterward reflected on what they wanted to see more of and what they thought sucked. Using this information, and a lot of our historical resources, I started to write. By May, I had a bloated script—probably twice as long as it needed to be—that I brought to the cast. Over the course of a three-week period in June we worked on specific scenes, and dove into the technology. Our sound designer, Kyle Sheehan, has been in the room with the actors since day one, and in many ways is another performer. In June, he was experimenting with ways to create atmosphere and worlds through sound. It’s nice to have this time—three weeks means that people stop being polite about the writing and start to vocalize the things that don’t make sense.

During the summer I went back into writing mode, cutting the text down to a manageable size. When September rolled around and it was time to start rehearsals, we once again put movement and design first, text second. For the first two weeks the cast developed a long movement sequence using pictures from the time period as inspiration. When we dove into the script again, there was already a vocabulary of how to move about the stage—a way to speak to each other physically.

Goat in the Road strives to make work that is entertaining, intellectually demanding, and funny, but we also want to make theater that is relevant to our city. Over the course of the process, I’ve found a lot of resonance between this search for painlessness and New Orleans, a place that relentlessly seeks transcendence. The city calendar is marked up with events and festivals and concerts that are designed to lift us out of the everyday towards some otherworldly state. I can’t tell you how many times my Mardi Gras weekend has ended with heaving tears or heaving laughter or both. But this quest for transcendence and cathartic experiences has a flip side—a certain kind of darkness. In the same way, the first people to look towards anesthesiology were reaching towards a transcendent goal: painlessness. But for so many of them, the search also brought despair and heartache and addiction, and in some cases, suicide and premature death. Our hope is that the themes of the piece resonate with our NOLA audiences. 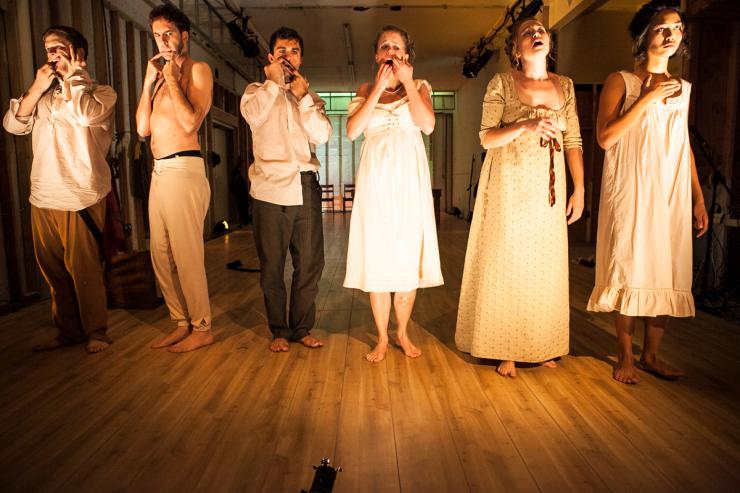 And here we are. The first time Numb is taking a spin in front of an audience. The process has brought us here, but what we really love is the product. Wait. Scratch that.

Devised and Ensemble
Louisiana
Process
U.S. by State
Most Discussed
Designing Collaboration: In Search of a Taxonomy of Collaborative Methods
Emily McConnell
Most Watched
The Gathering from the CrossCurrents Festival
Wednesday 4 May to Saturday 7 May 2022
Upcoming
Livestreaming a Conversation: Suzan-Lori Parks' Watch Me Work
Monday 30 May 2022

Such a fascinating process! Gets me thinking how I might incorporate some of the strategies in my own developmental and applied theatre work.