Recommended
Devising Our Future
HowlRound Theatre Commons
Most Discussed
Designing Collaboration: In Search of a Taxonomy of Collaborative Methods
Emily McConnell
Most Watched
The Gathering from the CrossCurrents Festival
Wednesday 4 May to Saturday 7 May 2022
Upcoming
Livestreaming a Conversation: #DeafWoke with John Autry II
Friday 20 May 2022
Essay by
Julia
Jordan
Gender Parity

This latest push for parity for female writers (and directors, designers, choreographers, and actors for that matter) began for me in 2001 with Susan Jonas and the NYSCA study. I remember holding it in my hands and almost shaking with the news that I was maybe not a crazy, bitter, jealous failure. Maybe, just maybe, all the whispering we women had been doing behind the latest boy wunderkind writer’s back was a little bit factually true. The numbers were so glaringly in opposition to the facts of my experience. Men had never shown themselves to have innately higher intelligence or talent as a gender than the women in any group, school, stage, or family that I had been part of.

My closest relationship at the time was with a young man. Although I know he loved me, his reaction to my thrill and relief at this new revelation was to take the papers I was cherishing and promptly throw them in the river (I was living on a boat at the time). Tough love, I suppose he thought. “Write a better play,” he said. Well, fine.  I have, since. But the pages in the river, and his actions, foretold more than the end of that relationship. 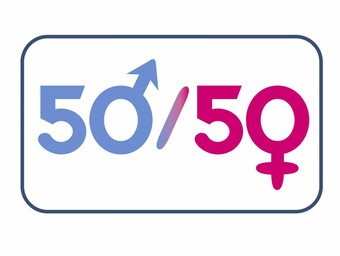 In 2008, Sarah Schulman and I organized two Town Halls at New Dramatists with the guidance and support of Todd London. The percentage of women being produced that year (at what I will call the major theaters in New York) fell below the 17% quoted as the norm by the NYSCA study. It fell to below 13%. The following year, after Emily Sands released her study of the issue, the percentage rose to almost 40%. Susan Jonas warned me at the time that there would be a spike and that it would again fall. It has, but has hovered just above 30% at those same theaters for the past few years. Not bad. It’s almost double the 17% that it was. I attribute the gain to Ms. Jonas, 50/50 in 2020 and all the other groups that have continued to keep the issue in the forefront of the theater community.

Theater reflects the world. Women are half the world. We have learned from the past that the voices and achievements of women were missing from the lists of great writers, composers, scientists—not because they did not exist, but because they were systematically ignored.

I was recently sent a letter that had gone out to a certain theater that had recklessly programmed a throwback season that was beyond overwhelmingly male. A long list of male and female writers signed a letter that stated: “Theater reflects the world. Women are half the world. We have learned from the past that the voices and achievements of women were missing from the lists of great writers, composers, scientists—not because they did not exist, but because they were systematically ignored.” I’ve been told that the theater in question has indicated that they will readdress their season plans.

In this day and age, with all the attention across the world on the role of women in societies, it is amazing to me that certain theaters are still turning an arrogant and blind eye to what is plain to see. It is equally plain for us to see exactly who they are. Their production histories are published proudly on their very own websites and splashed across flyers that are sent into our homes.

Hillary Clinton said, “I believe the rights of women and girls is the unfinished business of the 21st century.” In our little corner of the world—the American theater—it’s way past time every theater wakes up a bit to the fact that they can’t live in an unjust past which was frankly less excellent than it could and should have been. If our national and citywide percentages have not roused them to examine their practices, perhaps it is time to give them each a personalized wake up call. The times and public opinion have dramatically shifted. They just need another great big public push.

Diversity, Equity, and Inclusion
Gender
Most Discussed
Designing Collaboration: In Search of a Taxonomy of Collaborative Methods
Emily McConnell
Most Watched
The Gathering from the CrossCurrents Festival
Wednesday 4 May to Saturday 7 May 2022
Upcoming
Livestreaming a Conversation: #DeafWoke with John Autry II
Friday 20 May 2022

A study of the plays produced in the DC area last year put the percentage for the region at 18%. (Details here: http://www.suilebhan.com/20... This year's half-complete/still-underway study has the number higher -- closer to 25% at the moment, though half of the season has yet to be announced. I WAS feeling modestly pleased (if still, of course, unsatisfied) by that bump... but now I'm quite skeptical about it, hoping it's not a one-year phenomenon.

An exquisite essay. Thank you Julia Jordan for all YOUR amazing contributions to the American theater and especially to the issue of gender parity.

Dear Julia, Thank you for this article and all your work on behalf of women dramatists. Unfortunately, the theatre in question only added 2 more women to the lineup of the festival, admitting it was a token gesture. What was most egregious, however, was that the staff told a group of women playwrights that out of the 600(!) plays submitted for the festival this year, the women's plays just weren't there. They weren't as strong. There was no admission as to personal bias when picking plays and no commitment toward gender equality going forward. The staff also cited much good developmental work of women dramatists at the theatre but failed to understand the glass ceiling of lack of productions. However, we are continuing to dialogue and we have hope that the theatre will come out in front of the gender issue and create a selection process that does not leave out half the population.

Thanks for speaking the truth so eloquently. Susan Jonas, LIllian Rodriguez and I are in the midst of launching a new initiative. We will present a series of readings of plays by women from the cannon over the next year. Our first reading is May 20th. Read all about it: Join the mailing list: http://OnHerShoulders.weebl... Follow us on Facebook: https://www.facebook.com/pa...

YEA! once again HowlRound is giving the forum for all these discussions to practice their power and to move forward with support from this very scholarly and well intentioned ensemble. looking forward to action requests - what do we DO next?

Check the TACTICS interview series at worksbywomensf.wordpress.com. Each one ends with a suggestion of 'something you can do right now'

(By which I mean, the names of theaters who are failing at parity, not the name of the jerk who threw a scientific study proving systematic gender discrimination into the river.)

A quick Google search on the subject will tell you everything you need to know.

It won't, actually--that's tons of data to sift through. If the author has certain theaters in mind that fail at gender parity, it's useful to name them.

Thanks for this great post, Julia. How do we get the guys to pay as much attention to this issue as women is a great question. I have the image in my head from the PBS documentary on the women's movement, "The Makers," where all these women occupy the office of the (male) editor of "The Ladies Home Journal." Hmnn....