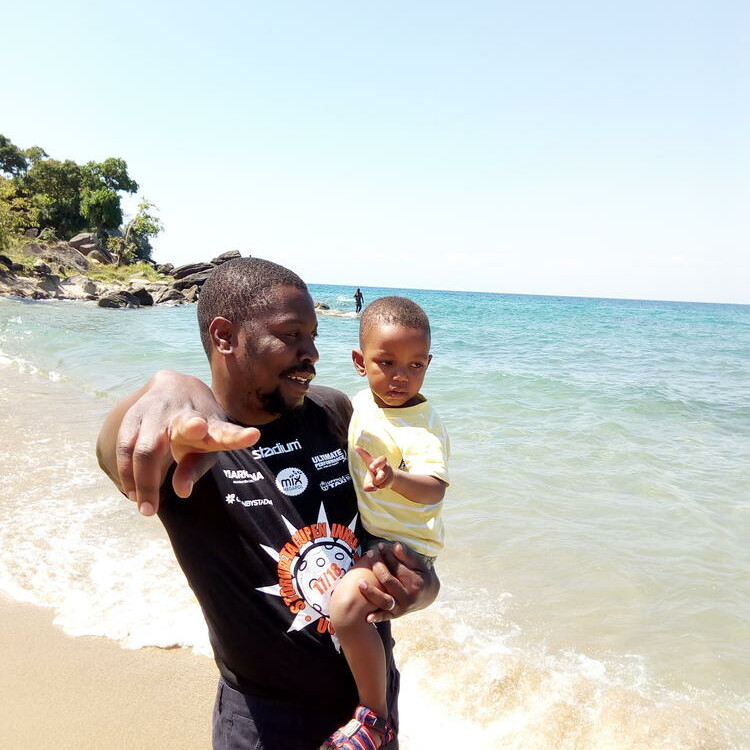 Theatre and Politics in Malawi

Historically in Malawi, there has been a conscious effort from government to control and subdue any form of theatre that challenges the status quo of oppressive political establishments. Unfortunately, this is still happening—even in these modern times, when Malawi claims to be democratic, when politicians have declared freedom of expression as a birthright for all.

Artists have not remained silent. They continue to find ways to fight for freedom, both for themselves and for all citizens, but power rests very much in the hands of the president and those who support him. As a result, there are always conflicts between artists and politicians, especially those in ruling positions. Artists who have strongly criticized the government in power have either been beaten up or threatened, and some have had their offices torched. Plays that aim to showcase the country’s realities are either heavily censored—to the extent that they lose their intended meaning—or the performance is just not allowed. During one of my street performances, we had a placard that read: “No man is an island.” Some politicians knew the placard was about how the president was making crucial decisions by himself, without thorough consultations with the people. They had it removed by the police without any room for discussion. These conflicts have happened throughout time: pre-colonial, colonial, post-colonial, and now what we call the democratic era.

One of the earliest examples of politics extending its hand to control performance comes from Malawi’s popular myth of rainmaking. Oral history has it that, for a long time, Mlauli was a chief and a rainmaker in the Maravi Kingdom (now Malawi). People used to gather at his compound whenever need arose for rain. Alongside selected Indunas (warriors), Mlauli would perform a ritual and rain would fall. This happened for many years until one day Mlauli failed to bring about rainfall. The elders of the land suggested to Mlauli to ask his children to perform the rainmaking ritual because they thought the spirit of Chisumphi (unseen god), responsible for many things including rainfall, had moved from him into one of his children. All of his children tried but still no rain fell. There was one other hope, though: Mbona, Mlauli’s son from a different mother, who was not regarded as one of his true children because of his mother’s slavery descent. But because the famine was severe, Mbona was reluctantly asked to perform the ritual. Rains fell and people celebrated.

Performers at the time saw a good story in all this and they devised dances and drama around what had happened. This did not go down well with Mlauli; it angered him to the extent of plotting to kill Mbona. The performances were eventually banned, and there were death threats made to anyone who would sing or perform about the event ever again. It is believed that nobody was ever seen again singing or publicly telling the Mbona story during the rest of Mlauli’s reign. This was the beginning of political interference in Malawi theatre.

Artists who have strongly criticized the government in power have either been beaten up or threatened, and some have had their offices torched.

Based on this story, it would be easy for people to think that the arrival of Western religion, Christianity in particular, would give the people of Malawi lots of freedom to do their indigenous performances. On the contrary, the Western missionaries with their partners the colonialists collaboratively suppressed indigenous performances. They were uncomfortable with the war-like dances and the drama they did not understand fully, preaching that they were evil, from the devil. Around the 1890s, colonial government ended up banning indigenous performances in Malawi. Authors Jane Nandwa and Austin Bukenya write in their book African Oral Literature for Schools (1983):

Colonists deliberately and systematically campaigned to change the mind of the Africans and get them to believe that everything about Africa was savage, uncivilized, primitive, pagan and heathen. They were pressurized into being ashamed of all aspects of their way of life…including their indigenous performances. In fact even gatherings of any form were prohibited.

This meant no rehearsals and the downfall of theatre. The drum, which is one of the most important instruments in indigenous performances, was banned—to this very day, some Christian churches with roots in the West still forbid the use of drums in the church (though they do allow a keyboard that has drum sounds in it). The colonial government, instead, introduced Western performances, which professor and critic David Kerr emphasizes in his book Drama, Media Entertainment and Popular Theatre in South East Africa (1998) were largely for imperial propaganda. 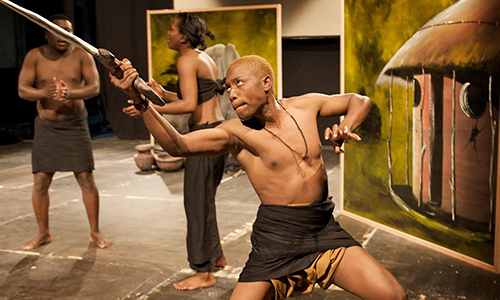 In 1964, Malawi got its independence under the leadership of Dr. Banda. The whole country celebrated. There were performances all over, depicting the defeat of the colonial rule. This was the only time when politics and theatre walked side by side. The banned indigenous performances resurrected with full force; theatre was geared towards praising the heroes who had fought hard for the independence of Malawi.

Dr. Banda became what people thought he would not be: a dictator. His rule was characterized by imprisonment without trial of artists of various genres. He instituted the Censorship Board in Malawi, whose duty was, among other things, to scrutinize every piece of art before it was brought to the public. The spoken objective of the censorship was that the government wanted decency in Malawi. The veiled objective, though, was to ensure that nobody would depict the dictatorship situation as it really was, and that those who seemed to be criticizing Dr. Banda’s governing, through any form, would be silenced.

During Dr. Banda’s thirty-year rule, art dwindled in Malawi. Jack Mapanje, a poet and professor of literature at the University of Malawi, was imprisoned without trial. His poetry was banned and other poets were forbidden from performing his pieces, with the threat of imprisonment. Mapanje was released after some years due to pressure from Western friends and organizations. However, he could not stay in Malawi as he continued to receive threats anonymously from political circles. He left the country.

During this time, the only performances allowed were those in praise of the ruling political party and its president Dr. Banda. Other productions allowed were pure comedies that had no connotative meanings to them. Any piece of art was heavily censored.

Around 1983, Dunduzu Chisiza Junior, who got his training at the Philadelphia College of Performing Arts in the United States, founded the first professional theatre company in Malawi, Wakhumbata Ensemble Theatre. To beat the system, he wrote controversial plays in a cryptic form, where a country could be represented as a factory. Many Malawians could decipher the meanings. It did not take long for this to be fully discovered and his plays were banned from being performed in secondary schools on the grounds that he was corrupting the minds of students. Chisiza Junior trained a number of theatre artists who all became critical of the government. This happened during the post-colonial period, when there was a one-party rule. People fought against this and in 1994 a new era of democracy arrived. There have been four presidents in the so-called democratic era in Malawi, however the government still wants to control theatrical performances.

When we arrived at the starting spot of our street performances the following day, there were heavily armed police. They threatened to fire teargas if we insisted on continuing with the performances.

In 2011, Nanzikambe Arts, another professional theatre company in Malawi, was doing street performances in the city of Blantyre on the theme “freedom.” I was the programs manager and I followed all the procedures to ensure the street performances would happen, including clearing them with the chief executive of the city, organizing the city police, and having a go-ahead letter by the country’s chief of police. I had all the documents.

When we arrived at the starting spot of our street performances the following day, there were heavily armed police. They threatened to fire tear gas if we insisted on continuing with the performances. We decided not to do them. This was at a time when newspapers in the country were awash with news of the president showing dictatorial tendencies. 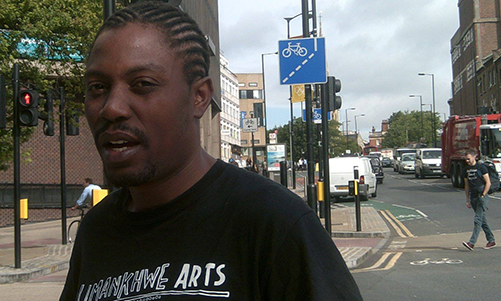 In 2014, I had adapted and directed a play that was in cryptic form, which allowed for different interpretations. When it was produced, arts journalist Sam Banda Junior picked up that the play was asking people if they were satisfied with the then-political situation or if there was a need for Malawi to be more democratic. When the article was published, the censorship board summoned me and questioned me as to whether the play was performed as it was presented to them or if there were some improvisations during the performance. I was afraid of being locked up; I thought police might show up at the performances unannounced and put me in a jail cell, explaining that I needed to be investigated.

Nkhwachi Mhango of SKJ Lab, an arts outfit, points out that it is sad that the censorship board censors works of art while their actual duty in the current democratic Malawi is just to classify pieces of art. “It is unfortunate that the censorship board tells you to remove certain parts in your script, parts which sometimes are moving the story forward,” Mhango said.

In an arts Whatsapp group I’m part of, I asked the others why they thought theatre is still suffering under the influence of politics. Ian Chitsekula, former president of the Theatre Association of Malawi, wrote:

There is no artistic revolution. In an artistic revolution, poets, singers, dramatists—in short all artistic disciplines should come up with works that allude to one voice; to change the boulevard of the political scenery into one of their liking… As artists we need to move with vigor to voice our concerns.

The struggle for performance freedom continues in Malawi. Artists have united through the WhatsApp group, where ideas that promote, among other things, artistic freedom in the country are shared. We are seeing a push towards an active cultural policy in Malawi by artists of various genres, and a number of artists have even joined politics. The hope is that, once in power, these individuals can help change the realities of creating work in Malawi, so that art can be made without political interference.