There Is a Happiness That Morning Is, written by Mickle Maher, is—quite simply—a masterpiece. Produced by Theater Oobleck and featuring Colm O’Reilly, Diana Slickman, and Kirk Anderson, the production garnered critical acclaim after premiering at Chicago’s DCA Storefront Theater.

Set on the sprawling campus of a small liberal arts college, two professors share a very steamy—and very public—sexual encounter. Addressing the audience as their students in a lecture hall the following morning, the loving professors—Bernard and Ellen—reveal and rationalize their carnal actions. As sidesplittingly silly as it is profoundly poignant, the play examines themes of love, life, and death—all the while spoken in verse.

Written with an acute admiration for poetry, Maher takes full advantage of wordplay in this piece, relishing in every rhyme. However, the playwright reveals that the initial draft was written in prose, and it possessed little charm. Maher states that after an initial read, “I went home and rolled around on the bed and agonized, and in desperation picked up the first page, Bernard’s opening lecture, and started translating it to verse. And I enjoyed that and so stuck with it.” Truly, the poetic structure of the play propels purpose behind each verse.

The actors handle their verse work with confidence, grace, and ease. Of the early rehearsal process, Diana Slickman—who originated the role of Ellen—states:

The first thing I did when I got the script was take out all the line breaks in Ellen’s speeches so that I didn’t see it as poetry—which it is—but just as sentences. That helped me understand the text better and hear it a little better. Then I could emphasize the rhyme when it made sense to.

Maher adds that many outside voices in the rehearsal process helped with calibrating the rhymes. He states, “Oobleck’s process benefited us here, I think, because it was such a matter of fine-tuning, and groping in the dark, that having many pairs of ears giving their feedback was only to the good.” The playwright’s reference to “Oobleck’s process” is a nod to their strict principle of working without a single director.

It is an ambitiously unique concept: as a matter of artistic policy, Theater Oobleck does not use a director in the rehearsal process. When asked about this approach, Maher states, “A lot of creative group endeavors don’t involve a director. Jazz combos, rock bands, kids building a fort—those sorts of collaborations often work out fine.” He continues:

I think it’s a great working model for playwrights and new plays, working without a director. I think it pushes the playwright right up against the actors who are trying to realize the words. There’s not a director there to sort of insulate either party, or act as buffer between. So if something isn’t working, the playwright has to try and articulate directly to the actor what the words should be doing or what the playwright wants them to do—and often in that (sometimes heated) interaction, the playwright more readily gets the suspicion that it’s rather bullshit, that particular bit they’re trying to justify, and goes home and fixes it.

Slickman elaborates from an acting perspective, giving much credit to a give-and-take dynamic throughout the process. She playfully says,

Clearly, the democratic relationship existing within Theater Oobleck is one joyful harmony.

It is an ambitiously unique concept: as a matter of artistic policy, Theater Oobleck does not use a director in the rehearsal process.

At the centerpiece of this magnificent play lies the juxtaposition of William Blake’s Songs of Innocence and Songs of Experience. In their lectures, a cheerful Bernard revels in Infant Joy, while the somber Ellen agonizes over The Sick Rose. Both characters marvel in their appreciation for the poetry.

Bernard stresses the fact that we read poems to repeat them before excitedly revealing that mostly we read poems with the childlike wish that we might become them. In his boyish retelling of their lovemaking, Bernard realizes that with Ellen, he has finally succeeded in a joyful transcendence. He states, “Now at last I am this poem. I’m joy. I happy am.”

Ellen all the while agrees with Bernard’s sentiment, stating, “We read poems so to live as poems.” However, her sick rose differs from Bernard’s infant joy. Ellen reveals that she has a terminal illness and laments over a dying love. She says, “I’m going to lose my life. I wonder how repeating that improves my readiness.” Their lectures crescendo into arguments before being interrupted by the President Dean, played by Kirk Anderson. 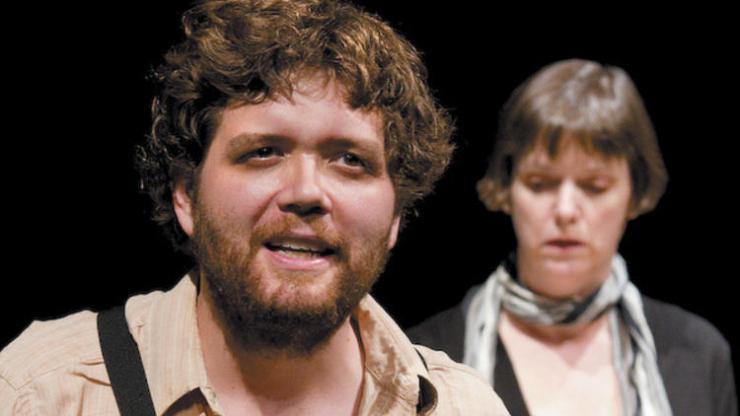 Perhaps the funniest line in the play is when we learn that the President Dean is an obsessed fan of Bernard’s short-lived folk career. The President Dean confesses to owning all of Bernard’s albums, to which an astonished Bernard earnestly replies, “Both of them?” Maher acknowledges that this line was a contribution from fellow Chicagoan and There Is a Happiness campaigner Jessica Thebus.

In fact, many individuals contributed to Maher’s working draft, thus going back to Oobleck’s mantra of art produced through collaboration. Maher states,

It’s important, too, to note that at Oobleck we give the actors final say in what lines they will or will not speak, and how they’ll speak them. Ninety-nine percent of the time, the actors defer to the playwright’s wishes because they’re nice people and don’t generally get off on crushing the delicate, perfect visions of the company scribes; but just knowing that Actor’s Prerogative (that’s the official term) is in play, makes the playwrights step up their game.

Anderson is also quick to give credit to Oobleck’s production stage manager, Jen Moniz, stating that she was invaluable with “taking notes and wrangling we folks with suspect memories.” Clearly, it is a huge collaborative effort with fruitful results.

After their successful run at Chicago’s DCA Storefront Theater, Theater Oobleck remounted the production at Victory Gardens Theater to even more critical acclaim. They also brought the show to New York, opening at the Tank. Many regional premieres are also springing up around the country, including Denver, Los Angeles, and Washington DC. Fans can enjoy reading a published copy in Theater Oobleck’s anthology, More If You Got It.

Also worth noting is Theater Oobleck’s nontraditional admissions fee to every performance, in which they use a suggested donation, “more if you got it, free if you’re broke.” Their manifesto of ideals and logic can be found on the Soapbox, which is certainly worth a read.

A repeated theme throughout There Is a Happiness is the wonder of reading poems so that we may become them. If that is indeed true, let this play become a poem so that we may in turn become it. Thus, we discover that we are joy. We’re joy. We Happy Are. Blake was correct. And so was Maher. There is a happiness that morning is.