Beau Jest in Boston is thirty years old. Over that time we have seen several transformations, but the impulse that brought us together has never changed. We are actor-driven. We only do projects we are personally invested in pursuing as a group. We like work that is physically inventive and imaginatively staged. We like to take our time developing a piece, and will spend anywhere from two months to two years on it. We use Beau Jest as a laboratory to explore new ways of combining gesture, text, and physicality. We are interested in using objects, masks, puppets, music, and dance to explore space, tell stories, and transform settings in the blink of an eye. We like to play with transitions. We use dance and theater improvisation as a writing tool, but all performances are tightly scripted and choreographed. We use different sources as the basis for a piece, and alternate between working with scripts, adapting films, novels, and comic strips, or creating something original out of whole cloth. We have an extended family of musicians, composers, designers, actors, and co-directors that are a vital part of our “think tank.” We like work that has a sense of humor. 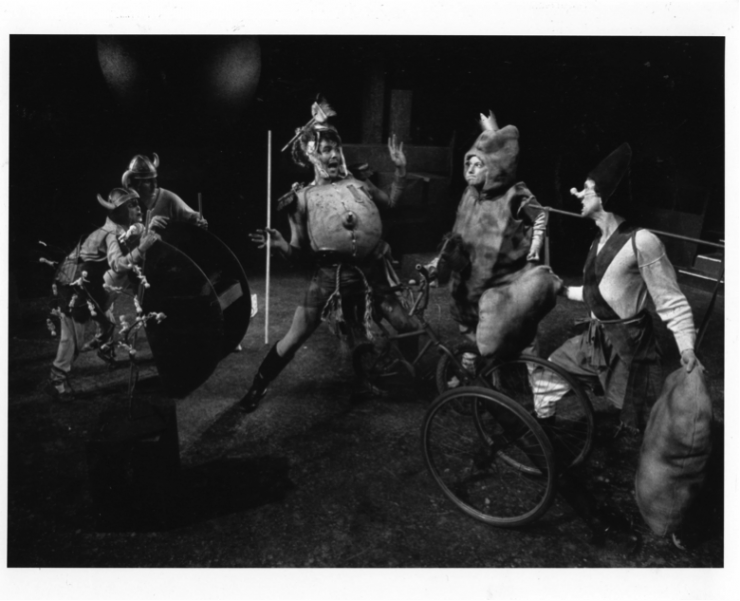 We began as an ensemble of five actors in 1984. That number was intentional and stayed with us for several years; it is big enough to create crowd scenes and multi-bodied images, and small enough to create relationships with a pivoting fifth person so that it never settles into the symmetry of two pairs.

Our first shows were collections of short pieces. Appearances at a few festivals turned our experiment into a commodity that other theaters wanted to book, and we developed an identity as a touring company. We performed at schools, theaters, and festivals around the country. Our business model was simple—we would pay ourselves half the performance fee as actors, and put the rest in the bank for our next production. Our early shows had almost no sets and minimal costumes. Over time, we’ve incorporated and developed other sources of funding through grants and donations, but touring remains an important part of our work. We enjoy each other’s company on the road, and like performing in a wide variety of communities. Meeting artists and audiences in urban and rural settings is one of the more rewarding and validating aspects of making work together.

Originally we developed new material and presented it in Boston before taking it on the road. In those early years, we rehearsed in an apartment at the Piano Factory, a historic industrial building in Boston that was converted in the 1970s into artist lofts as live and work space. Eventually we rented a rehearsal room, and then took over the lease of Ramon de los Reyes Spanish Dance Theater, a studio in the basement. We turned it into a functioning space and developed a home base, as well as a space for storage, teaching, and performance. This space was the recently closed Factory Theatre; it was home for several years, letting us subsidize our work with rental income. We now work out of Maine and Boston.

Our artistic structure is simple. I am artistic director, and founded the group by asking actors I knew from Emerson College, where I taught for many years, and actors in town who moved well and who had a certain honest presence on stage. We met at a restaurant, came up with a plan, and started making work. One founding member, Lisa Tucker, is still with the group, and has been in every production. Other company members left Beau Jest when they left Boston—but the sense of ensemble is such that if any of them were in the area again, we would pick right up where we left off and put them in the next piece. A few actors have commuted by bus from Providence and New York. When we need someone new, we audition locally. 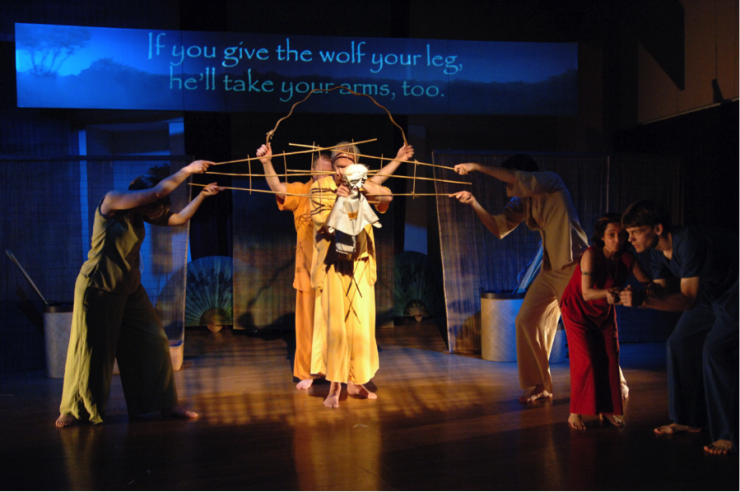 I make final decisions on editing our work, and usually set the rehearsal agenda, but everyone involved in a production freely contributes ideas, choreography, design, and acting choices. We work on pieces collaboratively until we all feel satisfied that the show is complete. I am not the kind of director who can figure out solutions ahead of time, and much prefer to work with a creative group of people in a room to harvest the best brainstorms. When I am in a piece as an actor, we usually bring in a co-director or other members of the company to guide the piece and provide an outside eye. I am finishing up A Practical Guide to Ensemble Devising, a book on how we work, which will come out early next year. 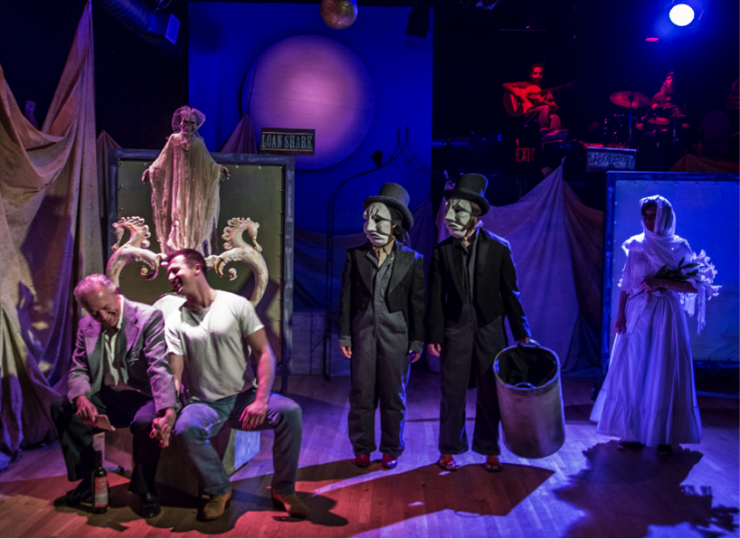 The company has evolved over the years. We’ve made shows with as few as two people, and as many as fourteen. In 1993 we stopped touring schools to focus on full-length work with more design elements. We decided the ensemble would grow or shrink on a project–by-project basis. After I moved to Maine in 1999, we found new working models using space in both states, and added actors graduating from Bowdoin College, where I now teach. We turned our eye to film adaptations with Samurai 7.0, and became heavily involved in the experimental work of Tennessee Williams—our next three productions were commissioned by the Provincetown Tennessee Williams Festival: The Remarkable Rooming House of Madame Le Monde, American Gothic, and Ten Blocks On The Camino Real. Our most recent project was a return to simplicity using four actors, an empty stage, and one bench in a film-noir inspired original show called APT. 4D. 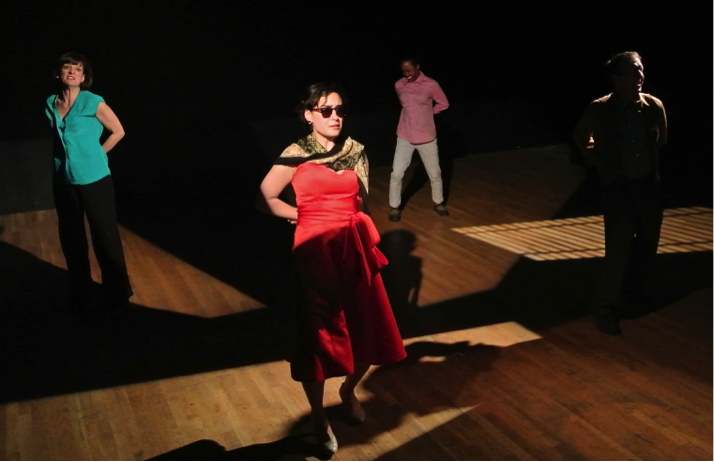 We recently presented it in Boston, at the Ko Festival in Amherst, Massachusetts and at Springfield College. Our plan is to continue touring APT. 4D next year. And when the time is right to make something new, we will.

Shouting to be Heard in a Religiously Conservative Environment

Director and playwright Tara Brooke Watkins discusses the process of creating The Bible Women’s Project, which fuses women’s stories from the Bible and the stories of women from conservative, Christian backgrounds.

Bryn Boice writes about how a rift with her father led her to begin work on a devised piece called I, Snowflake.

Mark Krawczyk writes about the experience his students at Boston Conservatory at Berklee had during a semester of working with artists from Double Edge Theatre.