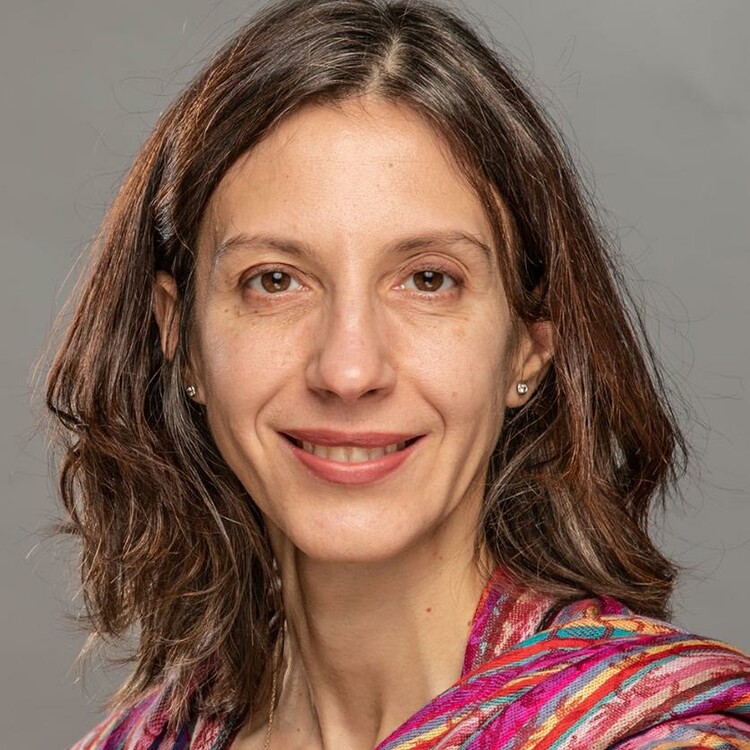 I grew up in the former Soviet Union when explicit commentary or criticism on society through verbal means was taboo, if not outright dangerous. Because of this, theatre artists behind the Iron Curtain learned to master the expression of social and political messages through the use of visuals. More than any political text could have, images conveyed the mood and attitude about the political situation. Although the political conditions and theatrical climate have transformed dramatically since then, I am convinced that the use of visuals as a means of expression remains essential in today’s politically and socially engaged theatre.

From my perspective as a visual theatremaker, politically and socially engaged theatre that relies exclusively on a verbal narrative does not realize its full theatrical potential. I don’t mean to undervalue these forms, including verbatim theatre or docudramas, which I treasure and use in my own devising work. They have the power to enable impactful dramatic encounters among spectators, performers, and communities, contributing to great insight, understanding, and exchange. It is only natural that theatre for a social cause, which makes audible the voices of people who otherwise go unheard, gravitates towards text. Nevertheless, because of my background as a visual artist and designer, I aim to inspire theatre practitioners to examine and explore how non-verbal theatrical elements can convey urgent content while at the same time create a deep emotional and empathetic connection with the audience. 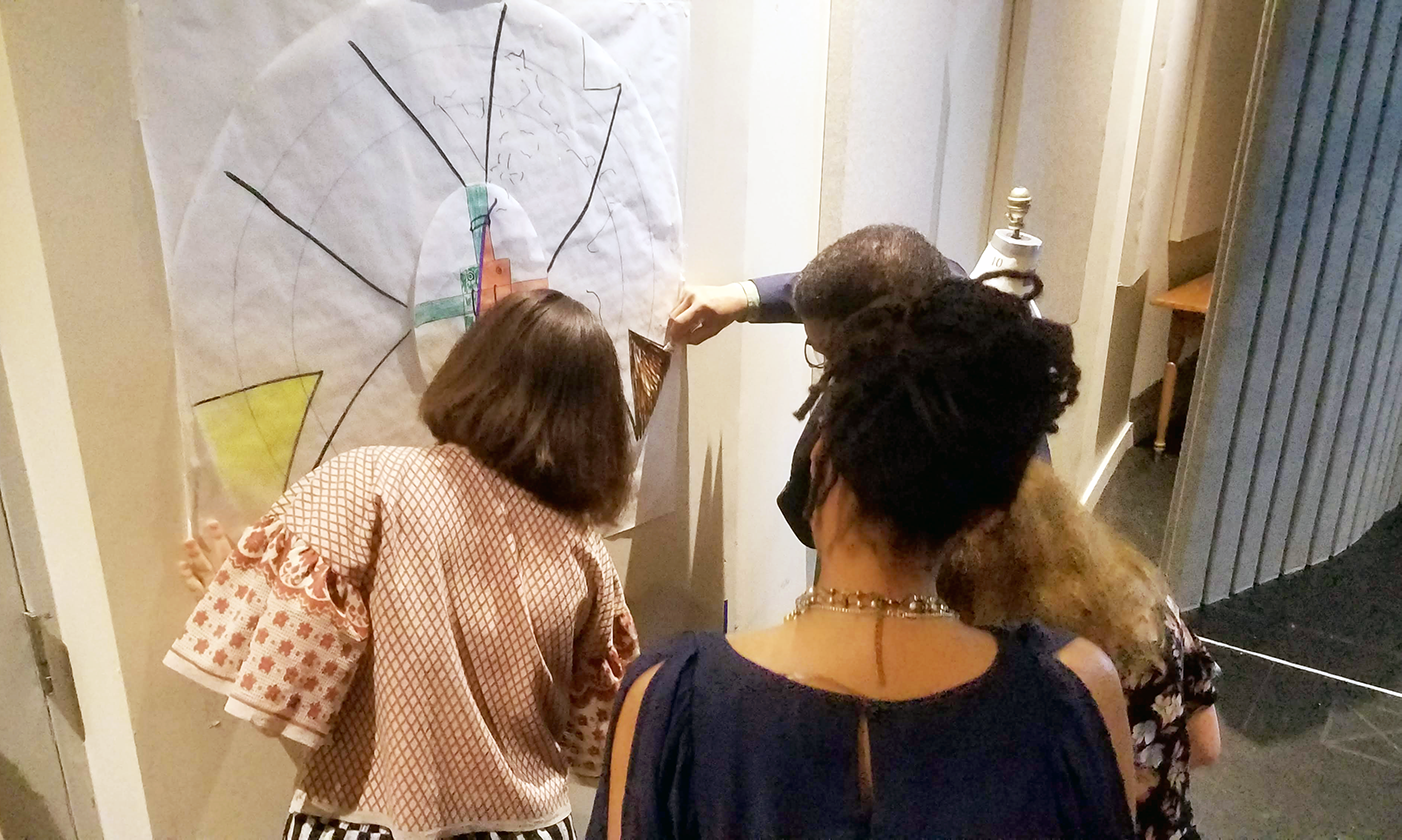 It might seem that without language it is hard to formulate a specific argument on a social or political topic, like climate change or global inequality. Yet pressing issues can be expressed through visuals just as eloquently as through words. Where language offers a degree of certainty to an issue, images are less defined and more open-ended: they allow theatremakers to formulate meaning that might be difficult to express verbally and allow audiences to formulate their own interpretations. An example of this is Holoscenes, an underwater performance installation I have been collaborating on over the last eight years with director and visual artist Lars Jan. In Holoscenes, performers execute mundane activities in a giant aquarium, adapting to repeatedly changing water levels—a powerful visual metaphor that connects individual everyday behaviors to long-term societal patterns driving global warming.

I share my approach to visual storytelling in practical workshops, where I introduce participants to the basic concepts and strategies of visual dramaturgy, visual literacy, and visual expression. In these workshops I explore the dramaturgy of basic theatrical components—space, props, and costumes—and I stress that design is about making meaning, not just designing set, objects, and clothing for performance.

Last year, for example, I gave such a workshop at the CrossCurrents Gathering in Washington, DC—a meeting dedicated to the intersection of performance and politics—where we investigated how visual dramaturgy can play a central role in theatre with a social message. I emphasized the universality of the visual language, which was of particular relevance for this diverse community of workshop attendees who regularly perform in front of audiences who do not necessarily speak their native language. When ideas are expressed in another language, the intended meanings often get lost in translation. Visual language, however, is universal—it does not require translation and it transcends cultural barriers.

Visual language, however, is universal—it does not require translation and it transcends cultural barriers.

Using visuals to create meaning requires the understanding of a different theatrical language, so the first step for any creator is to develop visual literacy—the ability to read and comprehend visuals. This concept can be grasped through stimulating object exercises, which explore how the manipulation, creation, destruction, and rebuilding of objects can be used to express thoughts, concepts, and feelings. In my workshops I often place a table full of found domestic items in the center of the space. Appearing to be a worthless collection of unrelated junk, these objects are carefully selected to evoke a rich variety of responses and opportunities for storytelling. I start by asking participants to choose objects that express a particular theme or issue; at the CrossCurrents Gathering workshop we focused on climate change and inequality.

In a number of layered and increasingly more complex activities, each built upon the previous one, I guide the artists through a series of techniques to develop a new, expressive, and narrative life for these objects. In the first exercise, individuals are asked to use the object they select to come up with a set of solutions to the issue being explored. Questions to ask include: What narrative can this object deliver? What does the object evoke or suggest? How can it be used to construct a character?

I challenge the artists to visualize and manipulate the objects in their imaginations in order to immerse themselves in visual imagery and define an object’s emotional, sensorial, and spatial qualities. Through these explorations, concepts for characters and spaces begin to develop.

Another exciting object activity, which helps artists understand how the internal potential residing within objects can promote creative thinking and communicate meaning, involves conveying a character’s transformation through the act of breaking and then reassembling the object. The artists can decide how to destroy their objects and put them back together. Most of them usually enjoy the opportunity to creatively destroy an object using whatever is at hand—hammers, heavy objects, furniture, or even their own shoes—but I often see people express a great deal of sadness when they see the broken objects they had begun to feel connected to. 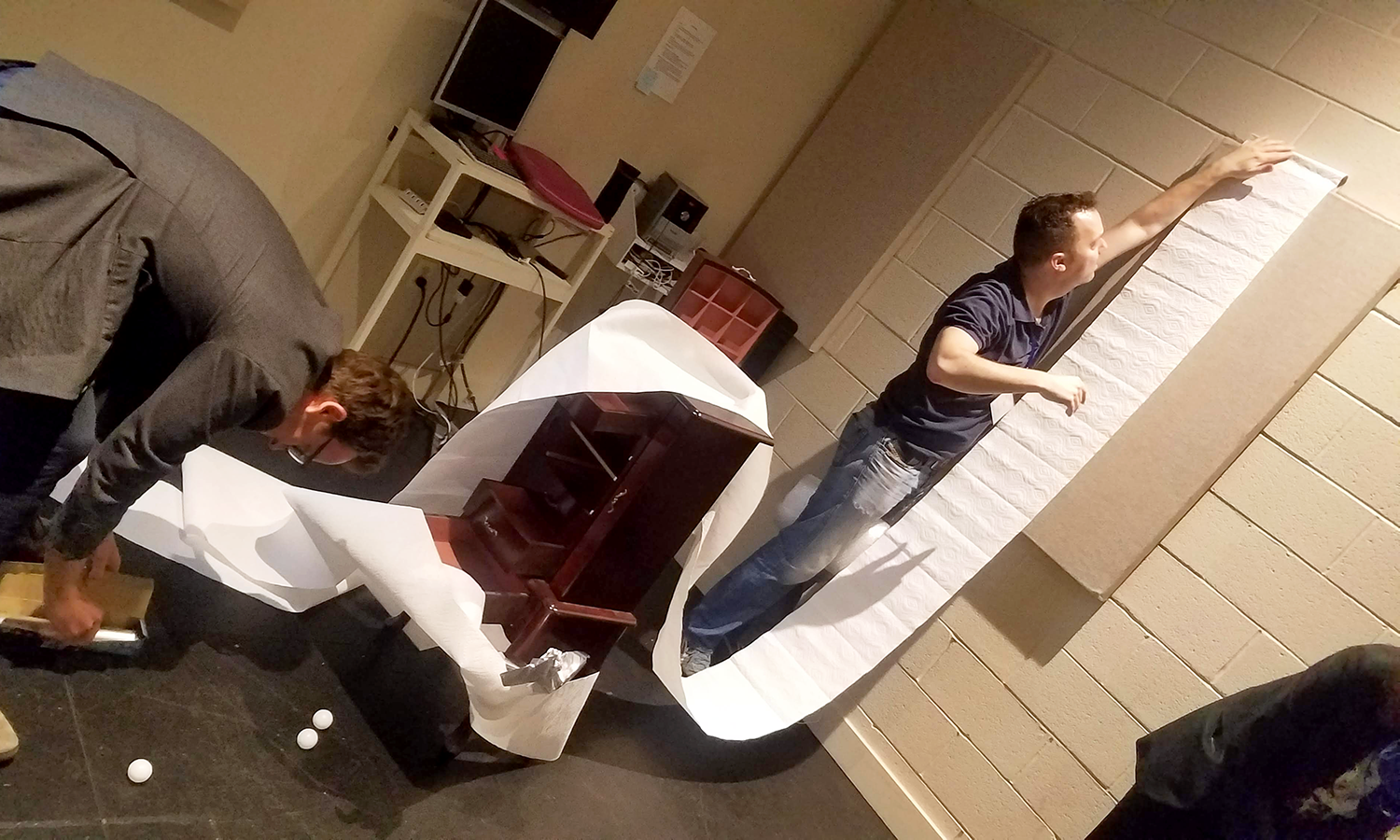 The Necessity of Considering Audiences When Making Visual Choices

It is crucial for creators to be mindful that audiences interpret every visual element put on stage. Contemporary audiences are especially skilled at decoding visual performance elements; for example, even before an actor speaks, viewers will interpret signs about their character simply on the basis of the costume. Therefore, when using visuals on stage, all theatre artists—not only designers—must constantly ask: “What am I trying to communicate and what will my audience make of this?”

The insights from the object exercises lay the foundation for a series of other exercises that address this question directly. The goal is to translate character qualities and attributes, or the psychological and dramaturgical features of environments, into visual elements—lines, shapes, textures, patterns, and colors—through highly spontaneous and intuitive association prompts. This crystalizes ideas, concepts, and emotions into a theatrical language based on the visual grammar of art and design.

It is crucial for creators to be mindful that audiences interpret every visual element put on stage.

Various tactile and multi-sensory activities that focus on looking, moving, hearing, and touching can help artists improve their powers of observation and develop visual creative thinking. This includes identifying shapes by looking for patterns in shadows, recalling muscle memories to articulate lines, and immersing themselves in music and sound to inspire color palettes. The goal of this active sensory process is to communicate intuitive and emotional responses and feelings, and to encourage free association and imaginative interpretation. It is important for artists to go beyond their immediate reactions when trying to visually express themselves and reduce so-called association barriers to avoid visual clichés.

After defining individual visual elements, artists can layer the shapes, lines, and colors that they came up with in the previous exercise into visual compositions, guided by the principles of design (composition, proportion, rhythm, balance, focus, etc.). Different colors, lines, shapes, textures, and patterns can be arranged on large sheets in evocative 2D visual character and space collages. Eventually, 2D collages can be converted into 3D assemblies using props, set elements, and basic materials such as fabrics, plastics, and yarn. The relationships between space, character, and material are explored in a play between 2D and 3D, selectively enlarging, reducing, or duplicating the individual elements of design. Lines, colors, and textures can inspire a spatial topography, which includes negative and positive space, divisions, obstacles, and boundaries. For example, in terms of character design, shapes and patterns of the collages can guide the silhouettes and the proportions of the 3D costume assemblies mounted on dress forms. 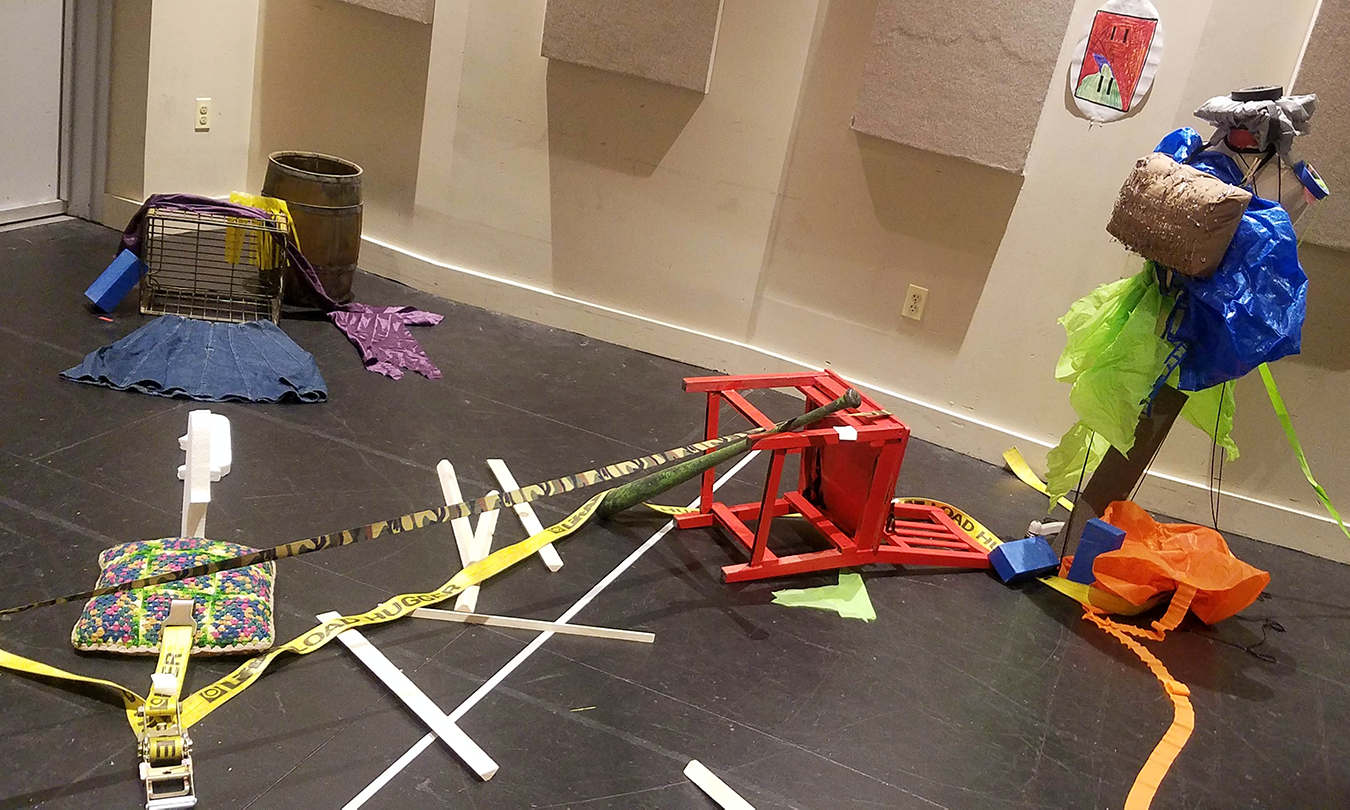 At a very practical level, this alternative design practice, which focuses on the essence of visual storytelling, brings the complexity and the dramaturgical potential of space and costume to the forefront. The process is representative of how I create my own work as a scenographer and a visual dramaturg: beginning with simple tasks centered around the exploration of materials and objects, and gradually integrating them into a dynamic conceptual and visual framework.

When it comes to politically and socially engaged theatre, this approach offers artists a chance to contemplate and discuss the possibilities and limitations of aesthetics, as well as ask a significant and often overlooked question: How can design be interwoven with social and political issues and topics in order to create performances that awe the audience while fostering dialogue and encouraging the exchange of ideas at the same time?

The answer lies in promoting the audience’s active participation in constructing meaning of the theatrical event, through the concerted use of all theatrical elements—with an emphasis on visuals—in shaping the theatrical experience.

Visual storytelling is an authentic way for the audience to assume countless possibilities.&nbsp;

Visual storytelling is an authentic way for the audience to assume countless possibilities.

It’s great how you guys use a visual technique to show the audience it’s a great approach!

This is profound and immensely helpful work.  Thank you, Irina!

Thank you for your kind words, I treasure your compliments.