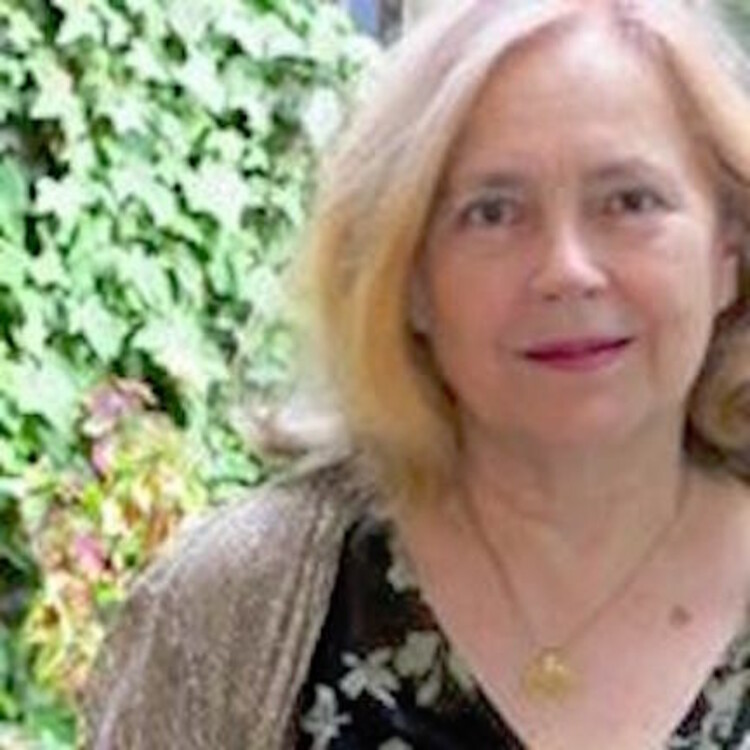 When Theatre Turns Audiences Into Activists

Often, when we’re moved by the news we see on the internet—a touching story about long-lost siblings, an emotional look at a major world conflict—we don’t just sit back and watch. We comment on and share the story, never considering the screen as a fourth wall. We offer our insights, experiences, contempt, rage, and support. And, by interacting, we become part of a community.

I write plays about people caught in conflicts that are going on in the world, and I’m always looking for ways to build empathy in my audiences. I want the people who see my shows to go beyond simply experiencing the story from the character’s point of view; I want to stir something in them so they feel like they’re part of the character’s community, like they’re ready to take action in real life to support the actual people facing similar challenges.

Within a week earlier this year, I attended two plays and an event that plunged me into possibilities to achieve this: The Courtroom, a theatrical reenactment of an immigration crisis; To My Unborn Child: A Love Letter From Fred Hampton, a play about the assassination of Hampton, a Black Panther leader; and a panel discussion hosted by the Center for Constitutional Rights (CCR) on how activists and storytellers can support lawyers in their attempts to make the legal system fair to all. 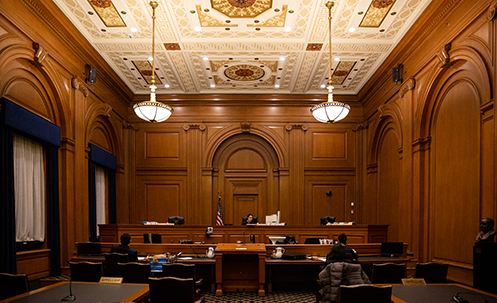 The Courtroom.  Photo by Maria Baranova.

Plunging the Audience Into an Experience

The Courtroom, devised by Waterwell in collaboration with Fordham Law School, was performed in New York City at law schools, courthouses, and Judson Church, where I saw it. The space was transformed into a brightly lit courtroom, with lawyers preparing papers. There were no programs, just a schedule of immigration trials for the day. It was evident this would be a hearing.

When the immigration judge (Ruthie Ann Miles) entered and gave the “all rise” call, the audience stayed seated. We knew it was not for us. The focus was on Elizabeth (Kristin Villanueva), who had come to the United States legally to marry her husband and who struggled to explain why she had illegally voted in an election. Her husband (Happy Anderson) described the despair he would feel if his wife were to be deported, with or without their baby. The judge then left to deliberate.

The proceedings moved to an appeals court, where Elizabeth fought deportation. When the audience heard the “all rise” call from the three appeals judges (Kathleen Chalfant, Michael Bryan French, and Mick Hilgers), we all checked to see if anyone else was going to stand up. No one did. As Elizabeth struggled to explain why she mistakenly voted, and the main judge and prosecutor questioned what can happen when people avoid consequences by claiming they don’t know the law, our empathy for Elizabeth grew. As before, the judges then left to deliberate.

The courtroom then became a naturalization ceremony. This time when the audience heard the “all rise” call, we all stood immediately. As the requirements of citizenship were read, we obediently repeated the phrases—including our full commitment to bear arms to protect the United States and accept any other responsibilities for the security of our new country. As an audience, we had become more than courtroom observers, we were becoming new citizens. The judge acknowledged our harsh journeys that got us to this ceremony, gave a soaring tribute to our democracy, and pronounced us citizens. We saw Elizabeth joyfully embrace her husband in the front row and we applauded enthusiastically—for one immigrant’s receipt of citizenship, for the ceremony, for the judge’s beautiful vision of the American dream, and for our own sense of renewed citizenship. The judge congratulated us, closed court, and left.

The quiet energy of the experience gave us—or at least one of us—the power to speak, to take action.

At this point, we weren’t sure if the play was over. Director Lee Sunday Evans did not break the scene with bows or curtain calls. No one in the audience spoke; most of us were lost in thought. I contemplated my own family history of immigration, of America’s first African families shipped here in chains as slaves, of the lands and lives stolen from our Native American ancestors. I felt caught between the judge’s soaring vision of democracy and my awareness that Elizabeth was only one hundreds of sessions that day. The audience waited, but nothing happened.

As people began returning to their roles as audience members, an older woman in the front row went to the mic and muttered, “Still live?” Her test tap echoed around the room and caught our attention. She asked: “Did we just mouth the words of citizenship and pledge to bear arms without thinking?” She reminded us of America’s current military actions right now in places like Yemen and asked, “Do we really want to take up arms to defend these actions?”

The audience burst into applause. I went over to the woman and asked: “Are you an actress? A plant?” No. Just an audience member who figured the mic might still be active. She had spoken from her heart.

On our way out, programs were distributed, and we learned the judge was an actual judge. Flyers covering a table invited us to sign petitions and join organizations to protect hundreds of other immigrants. The play had worked the magic of theatre: without any theatrics or role playing instructions, our time in the courtroom transformed us from audience members into court observers then into immigrants with deep empathy for Elizabeth’s legal journey. The quiet energy of the experience gave us—or at least one of us—the power to speak, to take action. 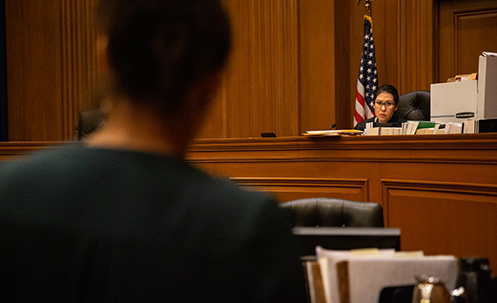 Dramatizing an Assassinated Activist… Then A Real Survivor Emerges

A week later, I was in Trenton, New Jersey, for the solo show To My Unborn Child: A Love Letter From Fred Hampton, written and performed by Richard Bradford at Passage Theatre. In the play, we met the spirit of the twenty-one-year-old activist and member of the Black Panther Party who was murdered by Chicago police. Directed by John Doyle, the fourth wall separated audiences from the stage, but we were drawn in to the story as Hampton realizes he has been shot to death and will never meet his child. He feels he has only a short time to tell his unborn baby about his life.

Whatever our political views, we learned about the shock Hampton faced in childhood when his playmate was lynched on a trip south, and we understood his desire to protect his people by joining the Black Panther Party to serve free breakfasts to children. We learned of incidents that happened along his rise to power and of his mentoring by Black Panthers co-founders Bobby Seale and Huey Newton. We felt his anger when police, afraid the Panthers were communists, destroyed the breakfast room and its supplies, even peeing on the food.

When the wrenching eighty-minute play ended and the full and deserved applause faded, someone special sitting in the audience was invited to come up onto the stage. It was Bobby Seale. Dressed in a business suit—not the tough black leather of the Panthers—Seale filled us in on his background as an engineer and his motivation to leave the corporate world to help children through the Black Panther Party. He wanted to heighten the children’s parents’ awareness of the need to elect African Americans to local and national government—there were only fifty-five in 1966. He corrected some of the play’s plot points.

When the audience applauded, it was not just because the play was good and the acting dynamic. We clapped our thanks at being inspired to take action for future generations.

Seale answered questions from audience members—a mix of people who once supported the Panthers, people who once feared them, and government officials from Trenton. Then there was a call to action. It wasn’t about support of current groups like Black Lives Matter, not even about taking action on more general human rights issues. We listened in hushed silence as Seale gave us an impassioned and thoughtful plea for progressives of all backgrounds to understand the connection between human rights and the dire need to take action together to save the planet from climate change. An unexpected call to action from the co-founder of the Black Panther Party, but very relevant to the play, in Hampton’s longing to protect his unborn child. Bradford’s play and the fine acting opened us up raw. But Seale, both as a character in Hampton’s story and as a fellow audience member, forced us to confront the dangers present to our own unborn children. When the audience applauded, it was not just because the play was good and the acting dynamic. We clapped our thanks at being inspired to take action for future generations. 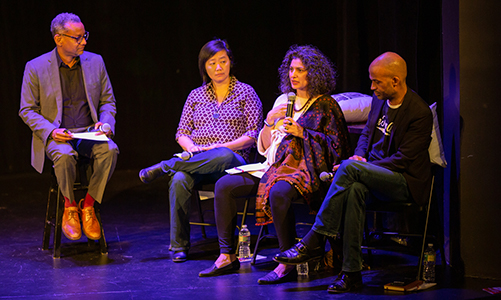 At CCR, Activists and Storytellers Fight for Justice

The same week, I attended a Center for Constitutional Rights’ event in a community center, where Vince Warren, CCR’s executive director, called for activists and storytellers to support the efforts of human rights lawyers. Warren challenged the audience—a mix of people from the various professions—to use our respective powers to bring fairness to all groups and individuals in precarious situations. He encouraged activists to reach out to people impacted on all sides of a legal battle and storytellers to communicate the tales of people struggling with injustice in ways that that would strengthen empathy for all people.

The panelists discussed ways to work of, by, and for the people: activist Joo-Hyun Kang (director of Communities for Police Reform) talked about the challenges of bringing people with competitive concerns together under one inspiring vision; storyteller Kayhan Irani (Emmy Award–winning artist and author, as well as theatre of the oppressed facilitator) shared ways to create stories from real-life experiences that give marginalized people a voice and strengthen empathy in the larger community; and Carlton Williams (human rights lawyer and co-chair of the National Lawyers Guild’s Massachusetts Board) addressed the value that activists and storytellers can bring to the work of lawyers as they attempt to strengthen justice and fair treatment for all, even the most vulnerable.

The events I participated in offered different ideas to build empathy and instill in an audience the desire to take action. The Courtroom turned audiences into immigrants—then, intended or not, activists. To My Unborn Child brought an audience member on stage to connect the story to today’s challenges. CCR panelists suggested strategies for supporting legal actions, using the community-building skills of activists and the empathy-building skills of storytellers.

As I continue writing plays about ordinary people who take extraordinary stands for fairness for others, I look forward to discovering other ways storytellers connect the characters on stage with everyday people to build the understanding and compassion needed to make change happen.

Two more performances of The Courtroom

”The Courtroom” is back in NYC this week:

Cheek in The Courtroom. Photo by Maria Baranova.

We are pleased to announced that Drama Desk-Winner Peter Francis James will be joining us for the next performance of The Courtroom this Thursday, November 21 at 7p!

Just coming off of his Broadway turn in Hilary & Clinton, Peter will be playing Immigration Judge Craig Zerbe in the deportation proceedings of Elizabeth Keathley.

A Re-enactment of Deportation Proceedings