Toward a Peaceful Theater 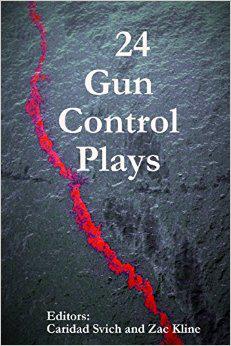 Ever since January of this year, NoPassport theater alliance and press in collaboration with twenty-six playwrights (twenty-four of which contributed plays, two of which contributed an essay and interview/reflection), Washington D.C.’s Theater J and force/collision. Pittsburgh’s PACT, Seattle’s Theater Simple, and New York City’s NY Madness, NYTR, and twinbiz have been staging gun control theater actions, which feature selected plays from the anthology 24 Gun Control Plays published by NoPassport Press. This week—May 27th through June 2nd, 2013—NoPassport collaborates with The Vicious Circle for Gun Control Theatre/New Media Action Week to stage script-in-hand-readings, candlelight vigils, and short films from as far as New South Wales and Chula Vista, California. The mission of the week is simple: to keep the dialogue through art alive on the subject of gun reform legislation in the US, and moreover, on a wider scale, promote a non-violent, no arms existence globally.

Okay, maybe not so simple a mission let alone for one week. However I have learned that it is only through keeping the fire lit on subjects, issues, and human concerns you care about, that perhaps the circle will rise. What kind of country and world do we want to live in? As storytellers do we shrug our shoulders, sigh a little sigh, and simply say, “nothing can be done”? Or do we try, with a little art, in a space of healing and remembrance, to be part of a movement or dialogue for progressive change?

The mission of the week is simple: to keep the dialogue through art alive on the subject of gun reform legislation in the US, and moreover, on a wider scale, promote a non-violent, no arms existence globally.

Zac Kline, co-editor of and contributing writer for 24 Gun Control Plays speaks in his introduction to the collection about the necessity, sometimes, for theater to be part of a call for action, to demand in artful and complicated ways to ask the tough questions of its audience—its fellow citizens—and to seek at the very least, the beginning of a spiritual conversation, and steps toward social action after the plays are over. My fellow writers and theater makers in this project come to the issue of gun reform legislation from multiple, divergent perspectives. Throughout the twenty-four plays, they refuse easy answers, mere propaganda, or didactic, hectoring messages. Instead, the work here—which ranges from August Schulenburg’s lyrical A Poem for Sandy Hook, to Gary Winter’s satirical See Dick and Jane Go to School, to Yvette Heyliger’s socio-political and historical Bride to Baraka: The Pen Instead of the Gun, to Lynn Manning’s personal and autobiographical Electric Midnight Emergency Call and Gab Cody’s Everyday Villainy—these plays brim with urgency and passion, with heart and light, and with the charge of necessity. Call it, as Professor Jorge Huerta once said, “necessary theater,” because it is.

I think theater in our society has many functions, not the least of which is to educate and entertain. The balance is often tipped toward the latter, because, well, perhaps “education” is viewed as the bitter pill that must be swallowed, rather than the sweet that coaxes the palette. Far be it from me to suggest that a daily dose of bitter theater is what we need in this country. But I do think that as artists, one of the duties we have as cultural workers is to respond to and be part of cultural transformation. In playwright Tammy Ryan’s eloquent essay, “The Guns in My Plays,” Tammy explores how guns have factored into—sometimes unconsciously—the mechanics of her storytelling. She wonders now whether the habitual use of guns as mere devices in fictional narratives reinforces instead that guns are a perfectly acceptable and viable means to a end. If it works in a story, then why not in real life? And vice versa.

As this Memorial Day week, begins, not with shopping and big sales, but with remembrance of those who have served and fallen in the line of duty for our country, let us also remember the thousands (over 3,000 deaths related to gun violence since the tragedy in Newtown, Connecticut alone, according to Slate) we have lost on our city streets, in our schools, in our homes, and in the senseless, tragic massacres at Columbine, Virginia Tech, Aurora, and Newtown (to name only a few ) that haunt our collective imagination and speak, moreover, to our troubled society as a whole. Let us also pray, too, for all of those around the world who have been caught in (h)arm’s way with a call for a necessary theater of peace.