With Whom Will We Play? | HowlRound Theatre Commons Skip to main content

With Whom Will We Play?

This series on Audience Engagement explores the diverse relationships between theater and community through personal narratives and innovative methods of practice from a select group of artists and practitioners. We invite you to join the conversation and look forward to your thoughts! —Amrita Ramanan

The Foundry Theatre’s mission statement begins, “To assemble a community with revolutionary ideas for the theatre and the world in which it is situated,” and, in our recently conceived addendum, concludes, ”We consider our theatre company within an ecology of repairing, transforming, and collectively making the world… We seek to participate in a paradigm shift in the ways that art and the artists who make it are considered engaged in this democracy.” Community engagement has been at the center of the company’s intentions for nearly twenty years. Because of this it’s a difficult topic to broach without touching on all the forms through which we express our mission.  Some have stayed constant (commissioning artists, committing to produce what they create and supporting its development through to production, and our annual, stand alone, Foundry Dialogues); others emerged along the way (community theatre productions and Audience Ambassadors). Much of this innovation is tied to the other compelling makers with whom we’ve increasingly focused our community building efforts: the grassroots social justice organizers of New York City.

I joined the Foundry in 2010 as the Community Programs Producer, a position created specifically for someone with a social justice organizing background. I’m a transformative justice practitioner, part of a growing body of people innovating community-based responses to violence, which seek to address individual instances of violence as well as the social conditions that perpetuate violence. But “TJ” doesn’t pay, so I work in theater. Off and Off-Off-Broadway, downtown theater—that’s my straight job.

Or at least it used to be. My role has grown to co-leading the company alongside its founder, Melanie Joseph. We’re still trying to figure out how to make it all work. And although what follows is my particular articulation of how we do community engagement, it’s born from collective experience and reflection, in particular with Melanie, and my predecessor at the Foundry, Ujju Aggarwal.

Organized Communities
Through the lens of a community organizer, The Foundry’s first community, or “base,” is working theater artists. If we aren’t in dynamic relationships with generative artists, supporting the creation and production of challenging, aesthetically rigorous work, then we’re failing. If the Dialogues we curate and host don’t engage artists in deeper reflection on the social context within which we make art, then we’re failing. Artists are where we begin and who we come home to, the pulse of a much larger intention and process for community engagement.

Our “turf” (to continue the community organizing analogy) is New York City. This means we’re accountable to the people who call this place home. It makes us an oxymoron, a regional theatre for a global city. The art we make and the dialogues we convene are often made with, for, or about this particular city, and its denizens. And though many Foundry productions have toured extensively, we couldn’t exist anywhere else.

Artists are where we begin and who we come home to, the pulse of a much larger intention and process for community engagement.

The Foundry’s ongoing curiosity with how NYC works, and our desire to assemble a community with revolutionary ideas, has led us to invest deeply in relationships with the city’s base-building social justice organizations. These are the organizations made up of everyday New Yorkers who dream of authentic freedom, collectively challenge the insufferable status quo, and build new structures of care and interdependence in their place. The work of social justice organizers is easier said than done, often messy, and the outcomes are rarely certain. They have to hold a vision of something that does not yet exist, and then bring it to life with little more than what’s at hand… Sound familiar?

We Are Equal Because We Are Different
In partnering with communities organizing for social justice, with clear visions and practices of their own, we increase the possibility of authentic collaboration amongst equals. Equal not because of the similarities between artists and social justice organizers, but in the lucid engagement of our differences (to paraphrase a Zapatista aphorism).

Cultivating greater clarity and comfort with the differences of our lives and practices became increasingly urgent for the Foundry as we began to not only host Dialogues (roundtables, panels, town hall meetings) with social justice communities, but to produce the creation of new artistic work with them through collaborations with artists. We came to this not out of a desire per se to make community theater, as much as out of the recognition by artists and social justice organizers that making something together would be the most direct way to confront the disconnect between us.

These cross-sector, artistic collaborations emerged out of our 2010 Dialogues, with four out of the five events being the presentation of new works. One of them was “Invisible Women–Rise,” a dance theater piece created by members of Domestic Workers United and playwright Lisa Ramirez. Exploring themes of migration, isolation and workplace injustice, this production premiered at a town hall event in support of the pending Domestic Workers Bill of Rights. The play was quoted a month later by State Senator Diane Savino as she cast her vote in favor of the bill with the closing line “and now, invisible women rise, and be seen.” (This bill—ending nearly 75 years of domestic workers exclusion from basic labor protections —soon became law, and has set national precedent now bearing fruit in California.)

In 2011 we handed over our entire season to such collaborations. The result was  “NYC… Just Like I Pictured It,” a community theater festival re-imagining the city we live in, featuring five new plays and a full-scale musical. These went up in four of the city’s five boroughs and were created through collaborations between remarkable theater artists and organized groups of long-time residents defending affordable housing, immigrant workers asserting their rights, public school students organizing to end gun violence, community gardeners constructing shared green space, and holistic healthcare practitioners working cooperatively to meet the needs of their neighborhood.

We are learning about the distinct ways artists and social justice organizers relate to time (concentrated bursts versus regular meetings); questions of capacity and mission (How much can we give toward artistic production, to other forms of social justice work? When does the pursuit of one complement or hinder the other?); leadership and expertise (What process will lead to the strongest art? What process is most empowering?); and visibility and metaphor (When does metaphor augment our stories? When does it obscure them?). We also began adding lines to our production budgets for childcare, food, and language translation.

Whoever We Touch, Touches Us
Something else we noticed was that the audiences who convened for our community theater productions, the vast majority coming from low-income communities of color throughout the city, did not generally feel inclined to attend our other productions. So in 2011 we also launched our Audience Ambassadors program, designed to cultivate an audience for NYC theater reflective of the city itself. We see the program as part of a movement to reclaim the city for all who live here. 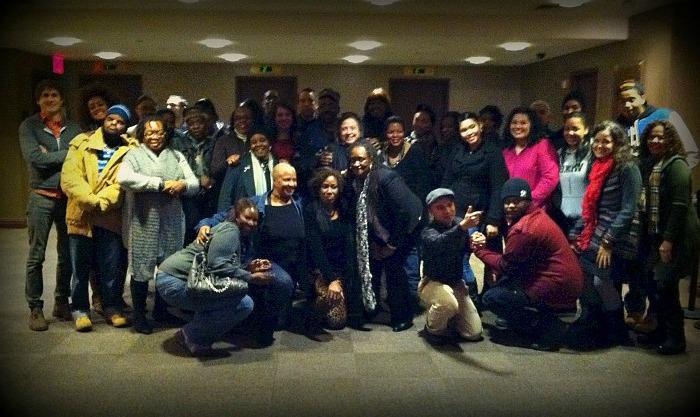 Audience Ambassadors employs community organizers to gather groups from their respective networks and communities to attend plays at various theaters throughout the season. We procure tickets, and pair each group with artists for a discussion afterwards at which we provide food. In our first two years we have brought upwards of 800 people to the theater— most for the first time —and engaged in some uniquely provocative talkbacks—discussing theater with people who are new to the experience has proven especially impactful to the artists involved.

Our 2012 and 2013 productions, How Much Is Enough and Good Person of Szechwan, have drawn increasingly larger audiences from these communities… and indeed the choice and creation of these particular productions was heavily influenced by our engagement with these communities organizing for social justice. 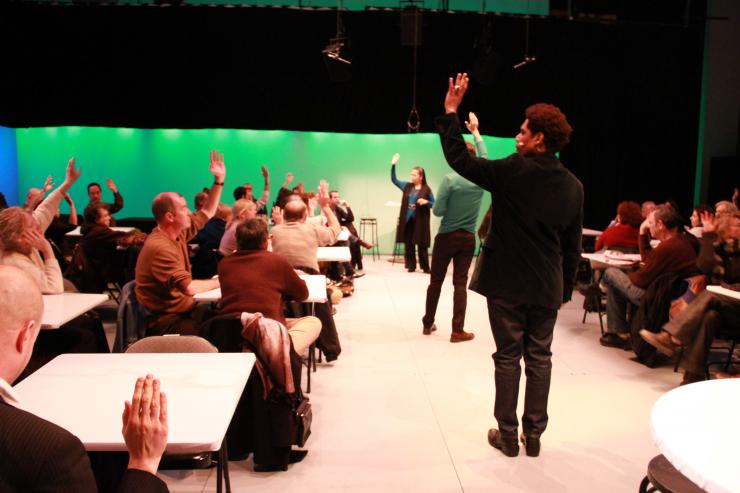 In assembling people and communities who have revolutionary ideas for the theater and the world, we cannot help but be changed ourselves. As artists considering encounters of such magnitude, perhaps the key questions are:

With whom will we play?

And …To what end?

Images: The Audience Ambassadors of Foundry Theatre. Dialogue in progress for the Foundry's How Much Is Enough at St. Ann's Warehouse.

Organizing History in the Alliance Theatre’s Working: A Musical

Margarita Kompelmakher details the Alliance Theatre’s process of adapting Working into a community-engaged production that both modeled grassroots organizing and told the story of the work of organizers in the city.

Isaac Mafuel talks about Malawi’s most prevalent form of theatre, its history, and its impact and challenges.

Hearing Each Other Over the Gun Fire
TJ
Parker-Young
Essay

Hearing Each Other Over the Gun Fire

Several months after Pittsburgh’s Quantam Theatre programmed The Gun Show, there was a mass shooting at a synagogue in the city. TJ Parker discusses how the company responded to the crisis, both through the play and through community engagement.

Excellent! As one who was very moved some years ago by an excellent Elgin Community College production of "The Good Person of Szechwan", I especially like the idea of theater artists collaborating with "groups of long-time residents to construct shared green space", and with "holistic health care practitioners to meet the needs of their neighborhood."

Regarding focusing on the passage of laws, however, with certain notable exceptions (including some mentioned above) I would suggest the main problem today is not so much the need for more laws, but to repeal all the laws that already exist that favor the few at the expense of the many.

Most corporate law (for instance, limited liability which allows people to get rich if things go well but make others pay the price if it doesn't) falls into this category.

And of course the most vivid single example in recent history was when, around the time of Obama's election (and with his approval as well as Bush's), hundreds of billions of dollars was taken from ordinary American workers and given to various Wall Street firms.

Yes, they told us if they didn't do this it would be the end of the world. But wouldn't it have been nice if theater people and community groups were so educated on economics (part of the goal of my plays, including my short comedies "Sax Goldman and the Suckers" and "Fred and Sam's Excellent Scam") that we all could have risen up en masse and cried "BULLSHIT! You just want us to pay for your greed!!!"?

Instead, people went along with it (in part due to misplaced loyalty to Obama)... and then were "rewarded" for doing so by having to put up with the spectacle of the very people who allegedly almost destroyed the country being given million-dollar bonuses.

As Anita said, "Smoke in your pipe and put that in!"

Right on, Neal. Right on.

Sounds great, and yet another example of the wide-ranging and long-lasting influence of a radically innovative theatre and community project, the Paterson Pageant, staged at Madison Square Garden 100 years ago, to help Paterson silk workers get the word out about their strike. Wishing you all great success!

Very cool. We'd never heard of the Paterson Pageant --> thanks for bringing it to our attention!