Why Puppetry? Musings of a Solo Puppet Artist

This week on HowlRound, we take a look at the many faces of American puppetry. Once again enjoying a resurgence in pop culture, puppet art’s impact on our nation's culture is deeper than most would think. This series will take a look at the art form through the eyes of some of its most innovative and stalwart thinkers. Find the full series here. 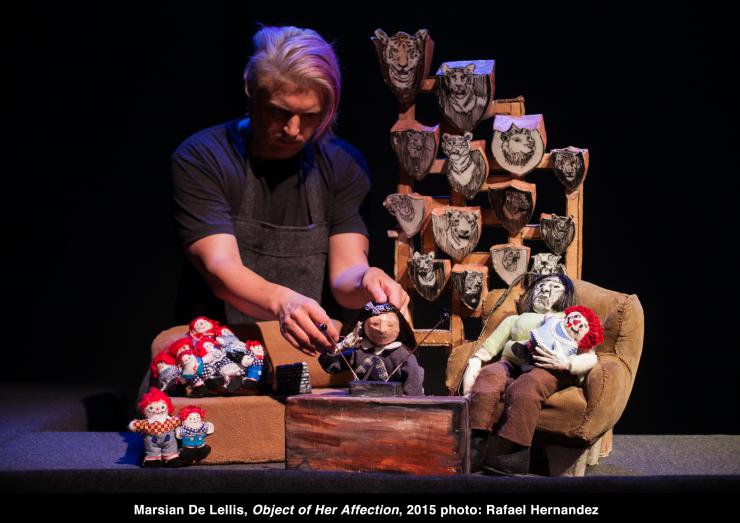 So I’ve been asked to write for Puppetry Week because as you may have guessed, I am a puppet artist. There. I said it and it’s not even our third date. But what exactly is a puppet artist? And why puppetry? I can only speak for myself.

In my practice, I use performing objects, cutouts, pop-ups, and elaborate costumes to create a time-based visual narrative form. Inspired by tabloids, reality shows, unsung fetishes, and pop culture, I create performances about unusual people whose stories I hope to make relatable through humor. I have found that puppets and performing objects have a disarming, primal power to suggest something quite simple and profound.

Live puppetry appeals to our need for the tactile and it doesn’t take place in an app, or on a touch screen.

I believe that the purpose of theatrical elements is to serve the story. Puppetry is but one element of a larger picture that includes scenery, sound, narrative, and audience. It is no more or no less important. Puppetry has metaphorical potential too. The format not only helps to tell a story, but can also become the story.

What do I mean by that? When I approach a new piece, I question whether a puppet is even necessary, or if the story could be better realized with actors. After I decide to use puppets, I mull over which styles of puppetry to select and their associative implications.

Marionettes and well-manipulated tabletop puppets could be metaphors for control from the effects of outside forces. Shadow puppets hint at flashbacks, liminal states, dreams, and hallucinations. Live feed evokes surveillance, simultaneity, multiple perspectives, and the cinematic. Pop-ups might be suited to a story that unfolds. Toy theatre can illustrate abstract concepts like capitalism, or the immune system, and epic stories taking place over time and locations. Hand puppets could callback childhood memories. Personally, I admire puppetry that is self-aware and redefines its own form.

Puppets are optimal, because you don’t have to pay them and they can’t really talk back to you. The top one percent may own 99 percent of the resources, but you can make a cast of thousands on a dime and still be austerity-chic.

I create one-person shows, because, let’s be honest, the idea of managing a robust cast of actors just stresses me out. One-person shows are enough for me to handle. Theatre is collaborative and it takes an entire team of assorted personalities to make that magic happen. Plus, I enjoy the challenge of voicing each character and having my hand in generating a consistent aesthetic specific to me.

There are several formats of puppetry I have employed to further storytelling. For example, I repurposed plastic bags made from petrochemicals into the materials for an oil slick bird puppet in an earlier piece about the BP oil spill. When I worked on Bride of Wildenstein—The Musical, I tried tackling the form-as-content idea with masks and found ways to transform my body to symbolize the central character’s addiction to plastic surgery. In another piece with a dancing spider, I used visible string in a web-like configuration for the puppet’s controls. 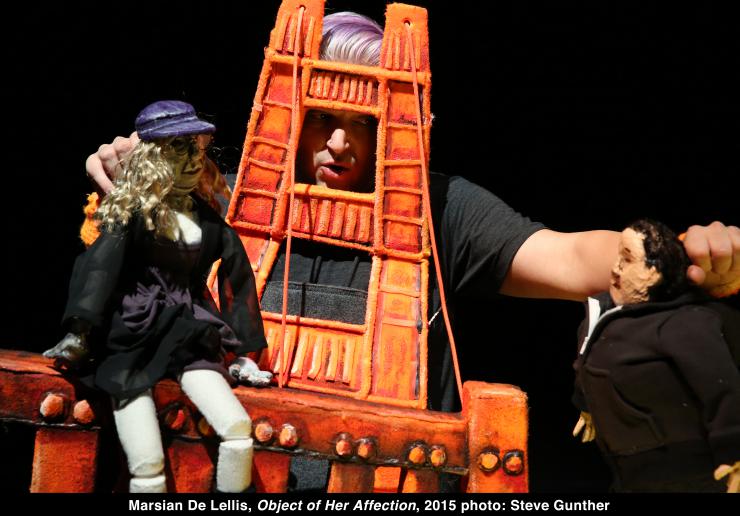 In my latest piece, Object of Her Affection, a woman develops intimate relationships with inanimate objects in her search for true love. As I examine the duality of objects as (in)/animate—animate in the eyes of the protagonist, while inanimate to the rest of the world—I am experimenting with the roles of onstage objects. A bridge may start as a set piece only to merge with my body as wearable architecture, transforming into a character. As I manipulate the puppet protagonist, I am simultaneously a bridge cradling her in my arms during an awkward break-up, and a witness to her heartbreak.

My practice also incorporates visual art, storytelling, film, and is deeply informed by my early figurative work constructing dolls. My current work builds upon an exploration of artificial figures and excess through narratives exposing the universal need to find love. Because this need to connect is so complicated, my protagonists are driven to extreme measures in their quests to connect with people or things that do not reciprocate their love.

But back to that pesky question: Why puppetry? And why now in the midst of mass extinction and social injustice?

As I push against stereotypes of puppetry as a performance practice, I am investigating my visibility as puppeteer. I’m also shifting my position inside and outside the story through a multiplicity of roles, including participant, manipulator, character, witness, and facilitator. Puppetry affords me powerful opportunities to progress in my skill level as a writer, performer, designer, and producer as I become more adept at creating work that articulates my own idiosyncratic and developing agenda.

But back to that pesky question: Why puppetry? And why now in the midst of mass extinction and social injustice? Why is puppetry relevant when there are battles over wedding cakes and whether Black lives really matter to everyone? Can cardboard and papier-mâché really save this fucked up world? 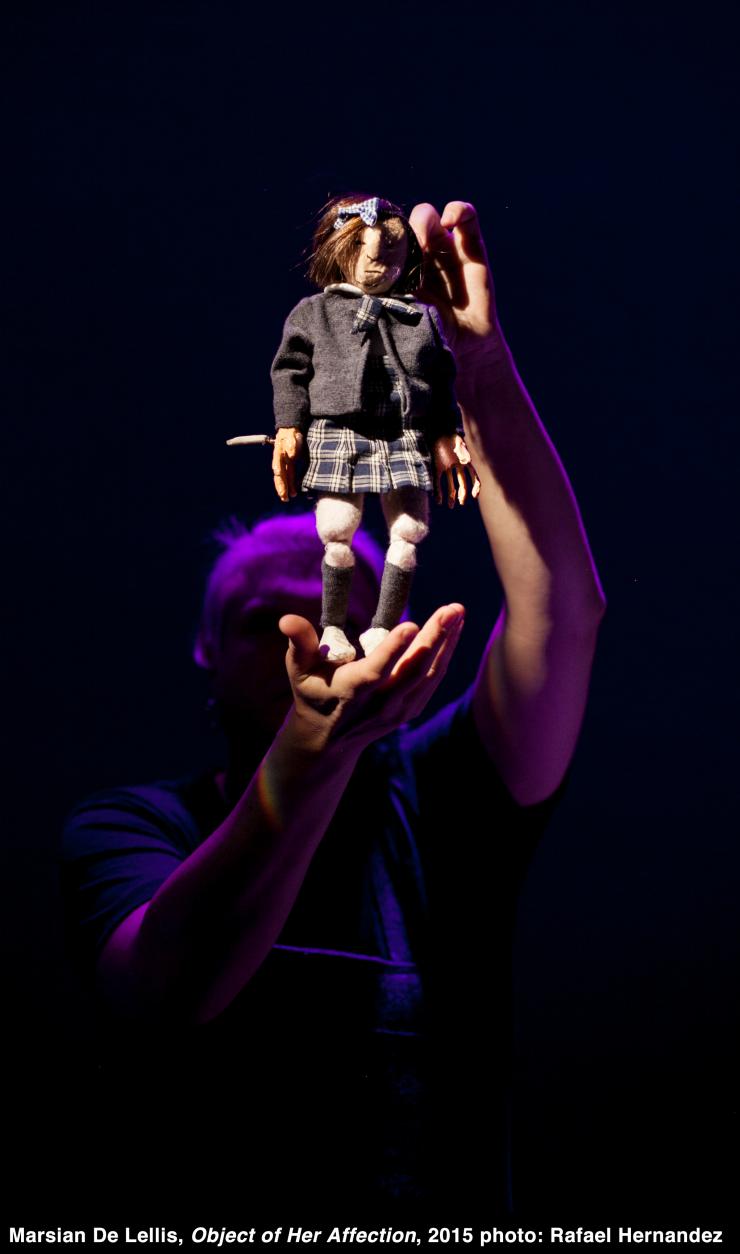 In the age of social media, people have become overly connected, but there is a growing sense of isolation. Live puppetry appeals to our need for the tactile and it doesn’t take place in an app, or on a touch screen. Puppetry brings people together for a shared experience to witness the artist in an intimate setting oozing raw creativity into a universe they have made with their own hands.

Puppetry might not be the answer to all the world’s problems, but if you can’t find peace in yourself, how will you find peace in the world? At least that’s what I’m going with today.

Once again enjoying a resurgence in pop culture, puppet art's impact on our nation's culture is deeper than most would think. In this series, we take a look at the many faces of American puppetry through the eyes of some of its most innovative and stalwart thinkers.

bravo. your life's work is so handcrafted and intimately executed. this is your soul on display. it's great. proud to know you all over again.

"If I could stick my hand in my heart. And spill it all over the stage. Would it satisfy you? would it slide on by you? Would you think the boy is strange? ain't he strange?"

Love it. Congratulations. I spent a summer working with Jim Henson back in the day and it made me realize how large the puppet world of possibilities is. Keep going.

thanks! @disqus_oKuJHVhfMx:disqus oooooh - what did you work on with JH?

Back in 1976 I'd just moved to New York as a young actor from the Guthrie in Minneapolis. There was a call in Back Stage for Equity members to be in a pilot project at the new HA building on East 68th, I think. I went over just to meet Jim and Frank, and told them that when we were on tour in South Dakota in February our favorite thing to do on our day off was get some bottles of wine and watch the Muppets on Sesame Street. They loved that so I got into the workshop. They were hoping to do a show on Broadway and needed Equity members. I spent the next six weeks training and laughing with them every morning, with a class of about 60 to begin, then down to 12 or so. We went to see them in this new show called "Saturday Night Live", but they didn't feel they were a good fit, and then The Muppet Show became a reality and the Broadway show was put on a back burner and I went out of town to do an acting gig. But what a summer it was. At one point the word came out that a major puppeteer died, I forget which one, and HA became international puppet communications headquarters, people flying in from all over. I asked one of them how big a deal Jim was in the puppet world and he said, "He opened up TV. He's the first one to make a puppet go over the horizon on TV." Jerry Juhl, Richard Hunt, they we all there. Hunt was "the new kid". I did a little film with Frank, who'd just bought this new thing called a video camera. And you could not have met more funny, witty, brilliant, gentle men than Jim and Frank. They would have loved your work, I think.

Awwww what a sweet memory and thanks!!! I think I've heard little bits and pieces of his unmade broadway show so it's nice to learn more too.

One Thirty-Second of an Inch to the Left

A Measured Look at Puppet Building

How Slovo. Theater Group Fights for Ukraine on the Cultural Front

Slovo. Theater Group uses theatre as a tool to fight against cultural oppression by promoting Ukrainian culture abroad. Audrey Rose, the group’s producer, discusses the process of making theatre during active war as a way of resisting oppression and violence.