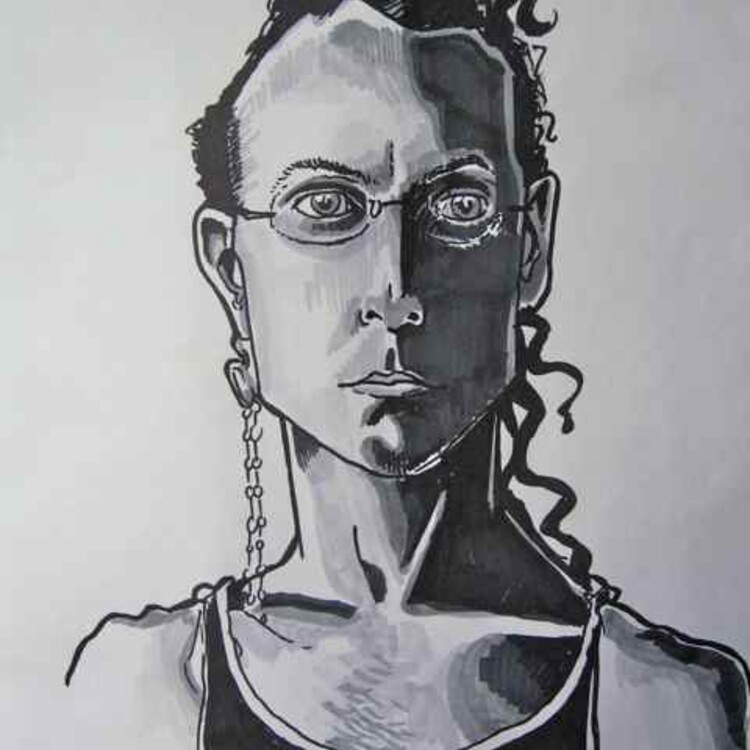 About Us Without Us

This series will explore questions of gender, power, and politics in the work we are making, how we are making it, and how it is received. I first met Rosza Daniel Lang/Levitsky through the Jewish Voice for Peace Artist Council but I had gotten to know Rosza’s incredible work as a performer and deviser in the Aftselakhis Spectacle Committee's Purim Extravaganzas. Through several years of attending these mind-blowing extravaganzas I saw Rosza and colleagues weave sharp political analysis with dazzling puppets and musical numbers that literally made the audience jump to their feet. Each year the Purimshpil lasts for hours, playing to an utterly packed warehouse, mixing surrealism with absurd dialogue, hilarious parody, wounding music, and an irresistible call to action. I recently got into a dialogue with Rosza about representation of transwomen, labor, and power in the theater world and beyond, and asked if Rosza would be willing to write up some the powerful ideas and calls to action that came out of it. –MJ Kaufman

This is not an essay in which I tell you horror stories from my own experience of how the performance world treats trans women.

This is also not an essay in which I tell you how to fix the ways that your theatre company, your venue, your production, your cabaret night, your drag show, your curated series, or whatever deals badly with trans women.

This is just a bit of diagnosis.

It sucks to feel like I have to, but I'm going to start with some bare basics. Read them anyway.

None of this is about identity. It is about material experience, about what it is like to move through the world, and how we are treated while we do.

This is not an essay about “trans people.” It's an essay about trans women. In the broad sense: folks in motion away from manhood, who might describe ourselves as transgender, transsexual, nonbinary, or any of a range of other terms. Who experience in their daily lives the social consequences of that motion, and of being seen in the world as women, as not-quite-women, as failed women, as fake women, as failed men, as "it" and "that."

The performance world mirrors the ways trans women are dealt with in many other areas: encouraged to give unpaid labor or take on low-paying, low-prestige service roles, which may help us survive but in no way support our work.

There are trans men (and other folks whose trajectory is towards manhood, who describe themselves as nonbinary, genderqueer, and other things) who write eloquently about that experience. I find less and less in common between what they describe and what trans women experience the more I think about and talk about these things. Don't take anything I say here as applying to trans men (or nonbinary/genderqueer/&c folks oriented towards manhood). Don't take anything those folks have written about their experiences, or about abstract "trans people" (which amounts to the same thing), as having anything to do with trans women. If you are a trans man, or otherwise oriented towards manhood, do hear yourself implicated in everything that follows.

For the last few years, a lot of the talk about trans women in performance has swirled around questions of representation. Jared Leto as Rayon. Neil Patrick Harris as Hedwig. Jeffrey Tambor as Maura. Laverne Cox, Janet Mock, Justin Vivian Bond, Kate Bornstein as community spokespeople. I'd love to use this essay to get into some of the more interesting, thornier corners of those conversations, but as engaging and in some ways important as they are, they're at best a way of talking about how dinner's late again instead of the fact that we're being served rotten meat and maggots.

So this essay is about labor and power, and its premise is in the disability justice movement's phrase: "nothing about us without us."

This touches representation, of course: casting men as trans women might start to be remotely ethical when it becomes a common practice to cast men as cis women—definitely not before. But even with casting, what's important is less who we see on stage than who gets paid to be onstage, who can make a living being onstage, who gets a credit that can help them remain a working artist. The title role in Hedwig, for instance, could have served the function that Simba in The Lion King has: a gateway to Broadway and to national tours for performers who have few substantial roles in which to show what they can do at the well-paid end of the industry. Instead, it's been one mid-career dude after another drawing a paycheck and adding to his resume.

But "about us without us" runs far deeper than who gets cast and paid. It's who does the casting, whether it's for a Broadway show, a run at Abrons Arts Center, a one-off at Grace Space, or a Monday night dance program at Judson. It's who does the hiring, whether it's called “curation,” “booking,” or “programming.” It's whose script gets a reading, and who picks the playwrights in the series. It's which generative artists get to be in residence, get commissioned, get booked—and even more so, who makes those decisions.

For instance, this fall's Dixon Place schedule includes two shows about Chelsea Manning: one a commission, the other venue-supported through a residency. This is a Good Thing—Manning is a badass, whose role exposing US war crimes (all still ongoing) makes her imprisonment deeply revealing about our political moment.

However: neither show is written, directed, or cast by a trans woman. And no trans women were involved in the decision to book these shows.

I mention this not to condemn either production (full disclosure: I performed in one of them, Tight Braid Group's Won't Be a Ghost), but to point out the institutional priorities determining who gets to make and show work. Dixon Place's apparent eagerness to devote institutional resources to telling (certain) trans women's (high-media-profile) stories has nothing to do with committing resources to support trans women to tell any stories whatsoever on their stage. And let's be clear that this isn't an anomaly: Dixon Place's 2015 HOT Festival—its signature month of LGBT performance—appears to have included no shows by trans women.

Similarly, while many trans women artists have appeared in La MaMa's justly lauded Squirts: New Voices in Queer Performance showcase, the sole arbiter of whose voices are "exciting" and "precocious" enough to be included is a gay man, selected as gatekeeper by another gay man. And this, like my previous example, is how it is in parts of the performance world with an explicit commitment to inclusive programming in general, and LGBT programming specifically.

In other areas of performance, there are other variations of this "about us without us" pattern at play as well. In nightlife performance worlds, in particular, there's an aggressive refusal to recognize trans women as such, in which we get treated as gay men (especially entertaining for dykes like me) even when our presence is being used to describe a venue, party, or event as trans inclusive or gender mixed.

The flipside of this is the ways that ostensibly inclusive language functions (intentionally or not) to make it clear whether or not an event is tainted with the presence of trans women. A trans-inclusive gallery show at Dixon Place, for instance, gets described as featuring "playwrights who identify as female" (rather than, simply, “female playwrights”), while the same venue's apparently exclusively cis "International Women Artists' Salon" has no such qualifiers attached. Similarly, "women and trans" almost invariably signals “cis women and trans men,” with trans women discouraged if not actively excluded.

And in the circles that can afford it, all the familiar double-binds of respectability politics and slumming for fun and profit are in full swing. Wu Tsang may be the darling of the Whitney Biennial, and screenings of his Wildness may pack 'em in, but the museum's parties are sure as hell not going to feature (or even invite) the NYC colleagues of the working-class trans Latina artists whose work the film was built on.

In all of this, the performance world mirrors the ways trans women are dealt with in many other areas: encouraged to give unpaid labor or take on low-paying, low-prestige service roles, which may help us survive but in no way support our work. For instance, institutions doing health services and social work directed specifically at trans women are thrilled for trans women to volunteer, or to work as overqualified patient navigators or outreach workers for minimal wages. But who gets hired for the decent-paying jobs at those projects? Take a look at the Ali Forney Center or Callen-Lorde Community Health Center. The pattern is the same as in the performance world: cis folks, and, increasingly, trans men.

Do I even need to point out that this is just a particularly accentuated version of the situation that all women face in much of the performance world? There are vanishingly few plays produced, from Broadway to the black-box circuit, where both writer and director (let alone designers, technical director, or producers) are women. Women getting underpaid as dramaturgs, stage managers, and so on—those are common. And it's no secret that the easiest way to get paid work in any part of the dance world is to be a man—even Ballez, notable among queer dance projects both for being lesbian-centered and for having a paid company, features both cis and trans men (and no trans women thus far).

I said this was not an essay that explained how to fix things. I will, however, end with a simple suggestion that we all can make as we encounter artistic directors, programmers, curators, bookers, funders, producers, and other people in positions of institutional and economic power in the theatre and performance world.

A little late on seeing this, but: thank *you*!And just to say: I've been able to frame that idea in that way because of the work and analysis done by

A little late on seeing this, but: thank *you*!

And just to say: I've been able to frame that idea in that way because of the work and analysis done by cultural workers of color (Black women in particular) and by folks in the disability justice movement. Demands for unpaid labor to correct for the ways that (usually paid) gatekeepers keep re-enacting all kinds of exclusions are pretty constant for lots of people. The ways that #ThisTweetCalledMyBack and other online initiatives have pointed towards these labor dynamics recently builds on a (far too long) history of pointing out how particular kinds of knowledge get devalued even as they're relied on and paid lip service... I'm in the lucky position of getting to work with and build on a foundation built by great organizers and cultural workers.