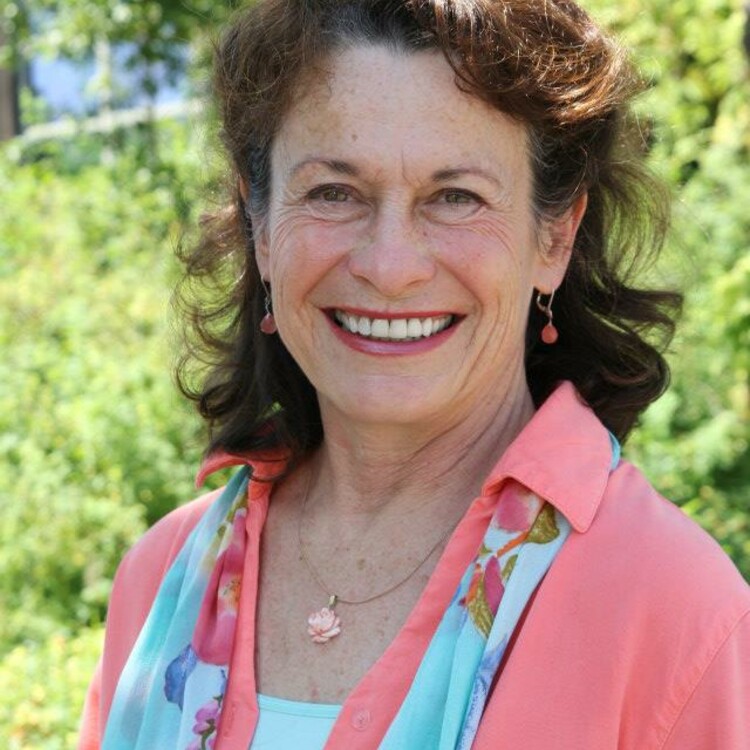 The Theatre in the Age of Climate Change series shines a light on the crucial role artists have to play in creating new and empowering narratives for our highly uncertain times. It makes visible the many connections between environmental and social justice, between global and local concerns, and between collective and personal responsibility. In this essay, Theresa May, playwright, artistic director of Earth Matters on Stage (EMOS), and associate professor of theatre at the University of Oregon, shares her process of play development for The HomePlanet. —Chantal Bilodeau

The Theatre in the Age of Climate Change series shines a light on the crucial role artists have to play in creating new and empowering narratives for our highly uncertain times. It makes visible the many connections between environmental and social justice, between global and local concerns, and between collective and personal responsibility. In this essay, Theresa May, playwright, artistic director of Earth Matters on Stage (EMOS), and associate professor of theatre at the University of Oregon, shares her process of play development for The HomePlanet. —Chantal Bilodeau

“Looking back at my home from space, I heard voices: the soft whisper of stories and songs from across time and space, rising up from the surface of the Earth, like rain falling upwards into the sky.” — Devi from The HomePlanet

Secretly, I had been dreaming of writing a play about space exploration for over twenty years—ever since I encountered Kevin Kelly’s 1991 book The Home Planet, published by the Association of Space Explorers. The photography taken from space, which is set beside personal reflections about space travel from astronauts around the world, is mind-blowing. I wanted those photos on stage, and huge. I wanted the astronauts’ compelling words to be heard.

Earlier this year, in the lead-up to the anniversary of Apollo 11 and all the media attention that came with it, I longed for more views that contemplated the larger picture Kelly’s book suggests: With all the beauty and wonder, why we are not doing more to safeguard the planet, which scientists tell us is both unique and rare? I decided to write the play I had long wanted in order to explore the tension between the forces of competition and aggression that gave rise to space exploration in the first place, and the sense of love and commitment to home, family, and place inspired by the photography that came back. In other words, as the character of twelve-year-old Millie in the play demands, “If we can go to the moon, and now to Mars, why can’t we fix climate change?” I stole Kelly’s title, The HomePlanet, but deleted the space to use visual language to underscore that our home and planet are indivisible. 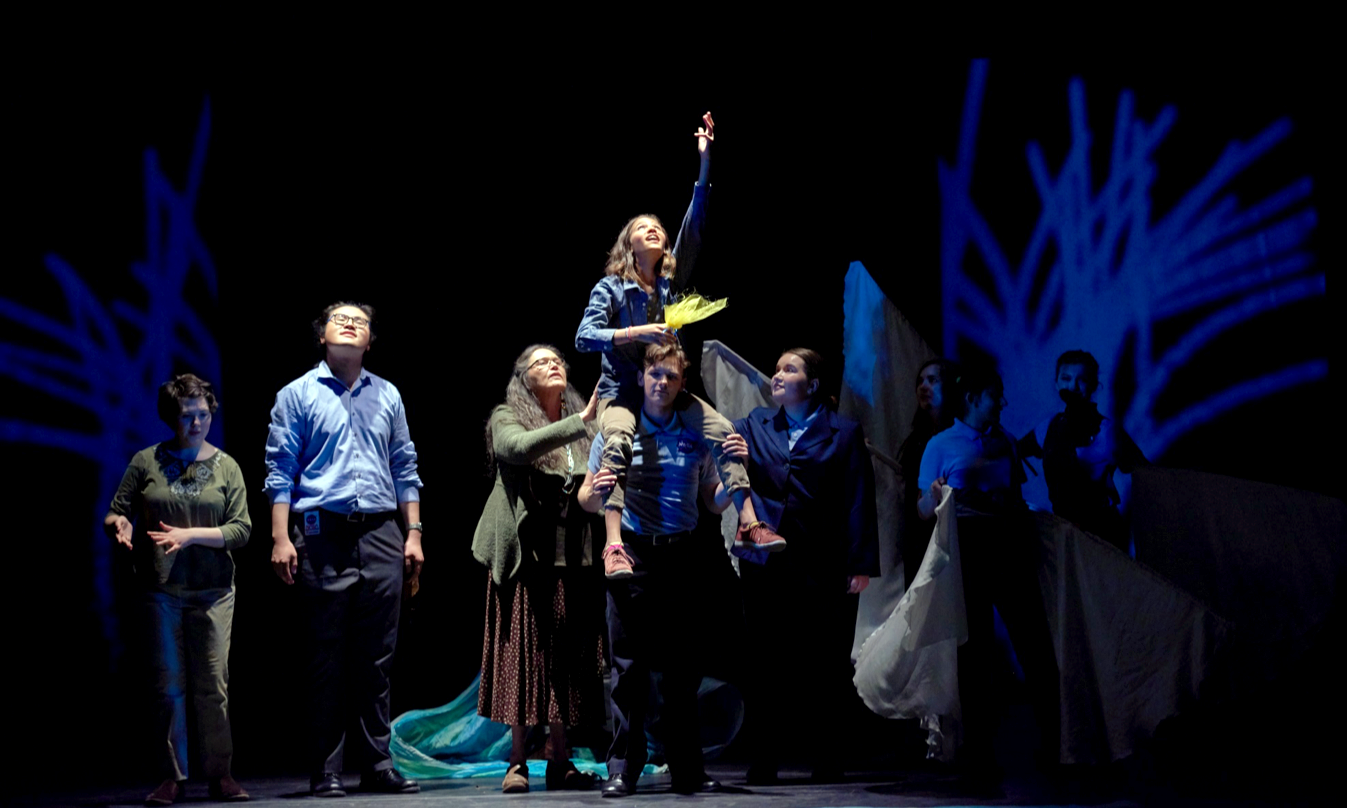 The Story of Sky Woman. The HomePlanet by Theresa May at University of Oregon.

What interested me was how the Apollo 11 anniversary and those gorgeous photos could call attention to the climate crisis and give voice to the youth activism that regularly saturates my climate theatre class. I live in Eugene, Oregon, where the first lawsuit by twenty-one youth plaintiffs—Juliana v United States (also known as Youth v Gov)—was filed in Federal court in 2015. The case is making its way to the US Supreme Court as I write, and the Youth Climate Movement has exploded. Young people around the world are challenging the systems that have treated our planet as a stockpile of resources for wealth extraction rather than as a home. I wanted my play to also show how tending to our relationships with family and place is also a form of activism.

With all the beauty and wonder, why we are not doing more to safeguard the planet, which scientists tell us is both unique and rare?

As a settler-descendent artist who regularly collaborates with regional Native tribal communities on plays that deal with issues like water rights, it was important that the play include Indigenous voices and perspectives. As a white Euro-American artist committed to allyship, I was also determined that the play include a diverse and international cast of characters.

The HomePlanet is the story a Native family of three generations of women: a mother, who is a US astronaut, who must decide if she can commit to being part of Apollo’s Moon to Mars mission; her daughter, a climate activist; and a grandmother, who navigates the conflict between them by reminding them both of the story of Sky Woman, the Indigenous creation story the grandmother had learned from her elders. The play moves back and forth between home place, outer space, and the astronaut training facility in Houston, Texas. The words of international astronauts are woven throughout, providing a vast spatial and historical/temporal landscape. But, ultimately, it’s a play about coming home, about our collective responsibility, and the concerns of young people whose futures are at risk. 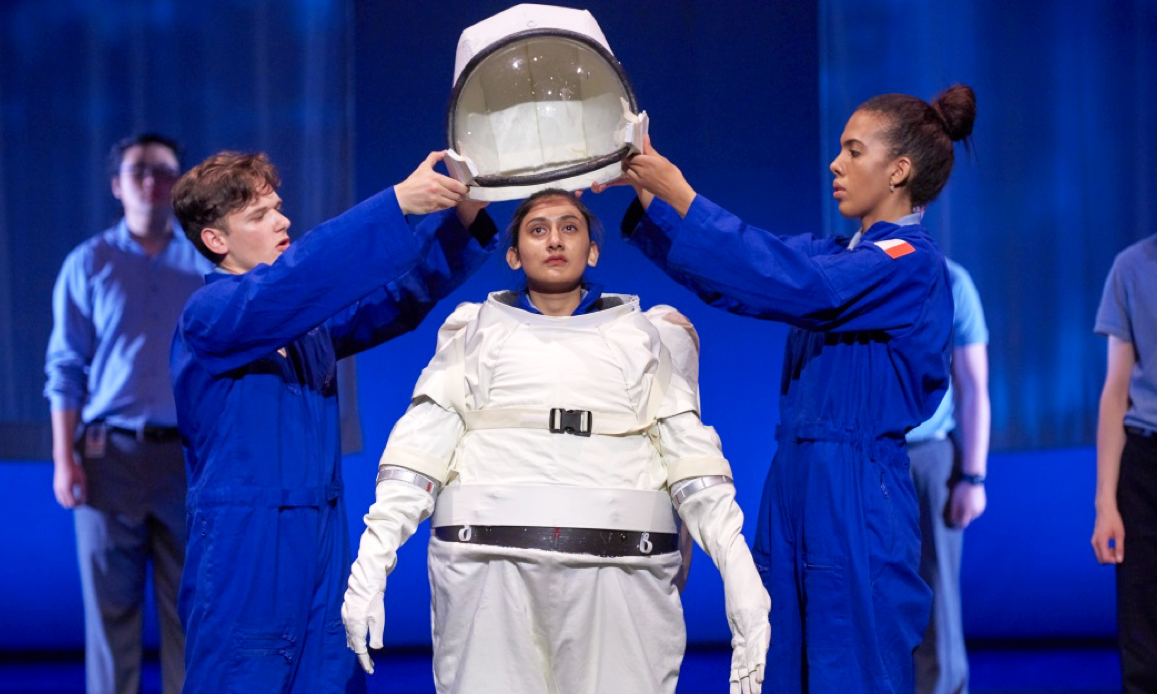 Astronauts Gus and Mira dress Devi in preparation for her trip to Mars.  The HomePlanet by Theresa May at University of Oregon.

During the play’s development, I worked with two groups of students over six months, workshopping ideas and generating significant parts of the play through improvisation and creative processes (Viewpoints, Laban, Element Work). Students also did research on the Apollo missions, focusing in on the environmental and social issues that concerned them the most, and they responded to writing prompts and wrote songs, poems, and stories. They interviewed family members, exploring their own histories to feel the stories they carry in their bodies, and considered where they came from, who they are, and where they are going. Students read the plaintiffs’ manifestos and biographies from the Youth v Gov lawsuit—which alleges that, through its actions, the government has violated youth’s constitutional rights to “life, liberty and the pursuit of happiness”—created composite characters based on the plaintiffs, and wrote their own stump speeches. These became part of the play, and composed a full-on climate protest scene that moved into the audience at the end of act one.

We dove into the many varied tellings of the story of Sky Woman: a creation story told throughout the Great Lakes region and shared in print by many Indigenous authors.

I turned to an Elder in my community, Marta Lu Clifford (Grand Ronde), with whom I have collaborated for several years, to help us explore the possibilities for an Indigenous viewpoint in the story. She shared her counsel and perspective on the topics of home, climate, stories, and space. We dove into the many varied tellings of the story of Sky Woman: a creation story told throughout the Great Lakes region and shared in print by many Indigenous authors, including Thomas King and Robin Wall Kimmerer. Marta felt that the story of Sky Woman had a place in the play.

Apollo 11 was preceded by Apollo 8, which looped around the moon in December 1968. Astronauts on that mission read from the book of Genesis and ethnocentrically wished the world a Merry Christmas. We wanted to link this back to Sky Woman, so decided to flip it by asking: “What are other creation stories, what would others read?” Because of the students’ conversations with their parents, grandparents, and elders, our play included narratives from across the globe, such as the Chinese creation story Pangu and the Norse creation story of Yamir and Odin. We used movement-based devising to explore their sometimes-fantastical imagery, and we talked about the different values each story imparts. 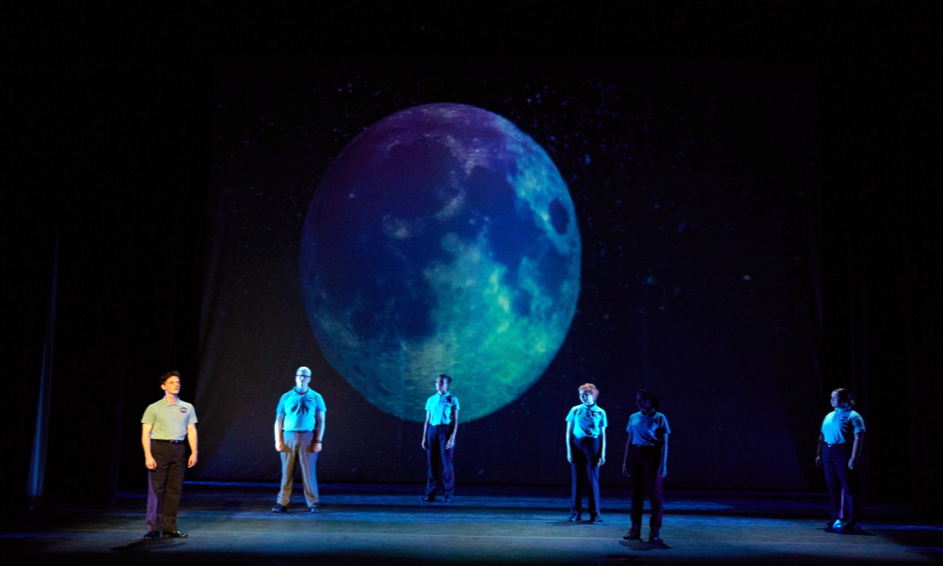 “A moon of my own” from The HomePlanet by Theresa May at University of Oregon.

Sky Woman teaches that humans make and remake the world in partnership with the animals, the water, the wind, and the sun. In Kimmerer’s retelling, she invites us to consider the Native concept of “seven generations”: from our present-moment vantage point, we must look back three generations and account for what we have done, and look forward three generations and imagine the impact of our choices going forward. In contrast to the Judeo-Christian story of Adam and Eve, the story of Sky Woman reminds us all that we are responsible for maintaining right relations with the planet that sustains all lifeways. The story of Sky Woman, and Marta’s participation, gave us a central spine on which to hang the many heritage stories, the astronauts’ reflections, the youth climate movement protests, and the international concerns over water, resources, and environmental justice.

Developing the play with students and guest artists over six months enriched my writing process in ways I had not anticipated. While not technically a “devised” play in the sense of complete collaborative decision-making, the process resulted in major portions of the play being drawn from students’ creative work. Many of these students continued into the rehearsal and production of the play in spring 2019 and felt a sense of ownership and accomplishment, as well as involvement in the subject matter that would not have been possible without a collaborative process.

These lines have a dual effect, asserting not only a human commitment to Earth, home, and family, but also an Indigenous assertion that this is still Native land and that “we’re still here.”

The result was The HomePlanet, a story-weaving that served as a meditation on the meaning of the fiftieth anniversary of the moon landing, but also on the power of stories to shape our relationship with one another and our home. The journey of the three generations of women is literally brought home in one of the final scenes when Blue, the mother and a Native astronaut, returns to find her daughter asleep on the couch having a nightmare. “I thought you were going to Mars, I thought you were never coming home,” Millie sobs. “I don’t want to leave. I don’t want to move to another planet. I like this planet!” Blue holds and rocks her, saying, “I do too. We’re not, we’re not moving. People aren’t moving to Mars. It’s just science right now.” Then, she says: “Even if I go, I’m always coming home. What is it you always say, ‘There’s no planet B’? Well, there’s no planet B, and there’s no plan B. We’re here to stay. We live here. This is our home.”

These lines have a dual effect, asserting not only a human commitment to Earth, home, and family, but also an Indigenous assertion that this is still Native land and that “we’re still here.” After telling Blue about the Sky Woman story she learned from her nana, Millie asks, “But are you going back to space?” It is the thing Blue has worked all her life to attain. She tells her daughter the truth. “Yes, probably. But I’ll always come home. I’ll always come back for you.” Similarly, in the face of climate change, there are no easy answers. But when we know what is at the center—home, family, kinship with the land—those choices can be made with awareness.