Recommended
Devising Our Future
HowlRound Theatre Commons
Most Discussed
Designing Collaboration: In Search of a Taxonomy of Collaborative Methods
Emily McConnell
Most Watched
The Gathering from the CrossCurrents Festival
Wednesday 4 May to Saturday 7 May 2022
Upcoming
Livestreaming a Conversation: #DeafWoke with John Autry II
Friday 20 May 2022
Essay by
Brendan
McCall

On Belarus and Theatre, Activism and Exile

This six-part series explores how the work of Belarus Free Theatre changed an American expatriate's life, inspiring him to find new ways to use theater, writing, and social activism.

Before departing Vilnius in March 2014, a journalist writing about the Belarusian Dream Theater event asked if I believed that theatre has any impact on politics? Or has the ability to truly change society? Does culture do anything meaningful, he wanted to know, as a “soft weapon” of diplomacy?

I’m not sure that I can answer his question, partly because I think it’s framed incorrectly. Do I expect President Lukashenko to resign, directly due to the presentation of these short plays at the European Humanities University and other colleges and theatres around the world on 25 March 2014?

No, of course not.

But this does not mean that cultural activities like theatre have no impact because the influence cannot be easily measured; the resulting transformation after a play’s premiere is often not instantaneous or systemic in the greater society. Nor should we conclude, therefore, that traditional forms of diplomacy are more effective to stimulate change than theatre. Lukashenko’s continual totalitarian governance of Belarus since 1994 should vividly remind us of that.

So where does that leave theatre? What impact does it have on its audience once the house lights come up? And what about the actors, who are also citizens and potential activists—what role does theatre play for them offstage and outside the performance space?

When I reflect on seeing Belarus Free Theatre perform in Minsk in early 2010, I see a number of my own activities sourced back to that moment: from helping BFT present their beautiful play Discover Love at Det Norske Teatret in Oslo and publishing numerous articles about them, to learning more about contemporary Belarusian art and creating the Belarusian Dream Theater event with Ensemble Free Theater Norway. 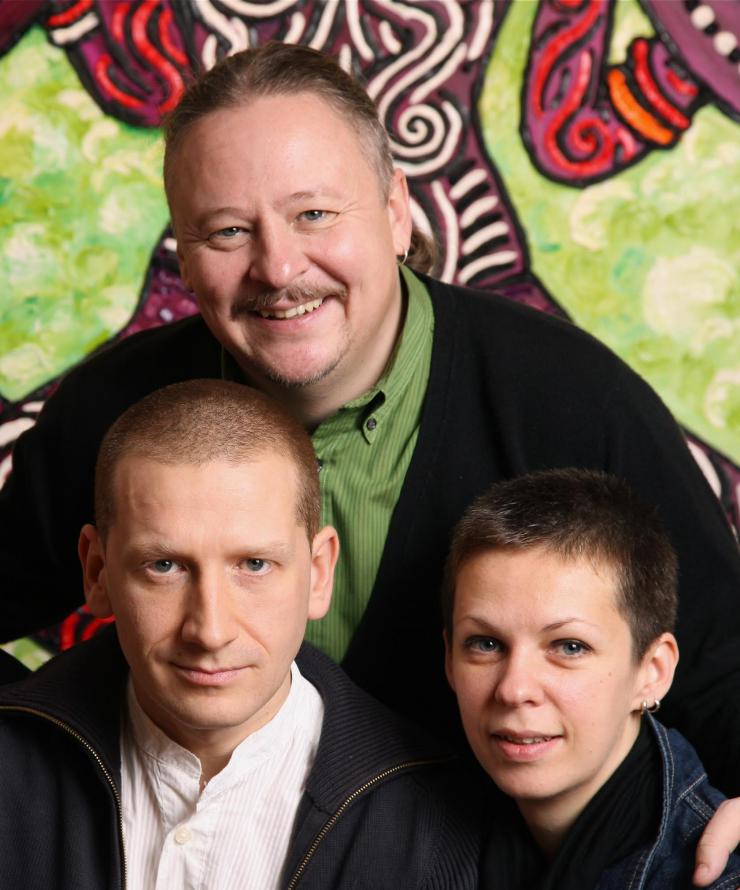 Recently, I got to speak briefly with Nicolai Khalezin, one of Belarus Free Theatre’s founders, about some of the changes he and his company have experienced during this same period. I was particularly interested in learning more about the company’s experiences since relocating to the Young Vic and London, after gaining political asylum in the United Kingdom in 2011.

Unsurprisingly, the group continues to be exceptionally productive. Since Christmas Eve 2014, they premiered Vladimir Shcherban’s Land №2, based on the play by Belarusian author Maxim Dosko; Do Not Give Up, directed by Kirill Konstantinov, and developed through BFT’s student-theatre Fortinbras; and The Time of Women, directed by Khalezin, and co-written with Natalia Kaliada, the group’s other exiled co-founder.

In addition to making theatre, the company has garnered recognition for creating a number of successful campaigns connected to their stage productions, such as Give a Body Back!, against the death penalty in Belarus; and the Red Line, about fracking and dirty energy practices worldwide.

Nor should we conclude, therefore, that traditional forms of diplomacy are more effective to stimulate change than theatre. Lukashenko’s continual totalitarian governance of Belarus since 1994 should vividly remind us of that. So where does that leave theatre? What impact does it have on its audience once the house lights come up? And what about the actors, who are also citizens and potential activists—what role does theatre play for them offstage and outside the performance space?

Regarding their company’s identity of being a “theatre in exile,” both Kaliada and Khalezin reminded me that “only four people ended up outside of Belarus” after fleeing persecution in 2011, following the aftermath of Lukashenko’s controversial presidential reelection, and that “the entire troupe has continued to work in Minsk, in clandestine conditions.” Using technological tools such as Skype, they continue to collaborate from London with their colleagues in Minsk. Vladimir Shcherban, original partner of Belarus Free Theatre who introduced the performers that later became the foundation for the company’s permanent acting ensemble, directed BFT’s first show via Skype—a play by Belarusian playwright Konstantin Steshik.

Has this changed the nature of the theatre work that BFT develops?

“The methods of work essentially don't differ from the usual staging activities. We’ve used Skype before during the training sessions with our Fortinbras students, and then adapted it for [face-to-face] rehearsals,” Khalezin says. “The only difference is that a director is on the other side of the computer screen. There is no difference with respect to working with actors. There is only a difference in the staging environment. Nothing could replace a live discussion, but this approach gives us a chance to understand each other even better.”

However, Khalezin underlies some of the unique “clandestine terms” distinct to presenting their work in Belarus today.

“As you might know, Belarus is among top countries named as ‘enemies of the Internet,’” he says. “And after the authorities put a lot of pressure on an owner of a place where we performed and rehearsed, we lost that place, and now need to rent many different spaces all over Minsk: apartments, offices, cafes, and so on, all under different pretexts. We don't want to put owners in any danger. People are afraid to lose their businesses, and we understand that completely.”

Nonetheless, Khalezin acknowledges that there remain a number of people ready to help, from providing places for rehearsals and performances, to conducting daily training sessions for BFT’s students. “Our managers do a unique job in keeping all activities running underground in Minsk,” Khalezin says with passion.

The biggest challenge facing BFT today? “A lack of funds,” says Khalezin without hesitation. “To bring the troupe together from abroad, and work for several months in Britain—this is a serious financial burden. But what is even more complicated is to continue operating daily in Belarus, underground.” Financial troubles are not unique to Belarus Free Theatre, of course; all companies in the United Kingdom struggle with this topic, he says. At the same time, Khalezin respectfully points out that theirs is a situation unique amongst theatres in Great Britain. “They didn’t come here in exile. They didn’t need to build their life up from scratch, and continue to create theatre while living at a friend’s house, completely reliant on their generosity.”

On the other hand, there is appreciation for a number of new opportunities the company has experienced since moving to London four years ago: an expansion of their technical staging palette, the ability to collaborate with more international actors, and greater potential for partnerships with theatres and educational institutions. “It’s a mutually beneficial enrichment,” Khalezin says. “They need us as much as we need them.”

Despite these changes of geography, methods of work, and collaborative opportunities, the heart of Belarus Free Theatre’s activity has remained constant since its founding in 2005.

“We attempt to understand human problems through theatrical language,” he says, “and within that spectrum, Belarusian problems.” Khalezin goes on to say that the subjects embodied in their performances are universal, and not limited to Belarus or any other single nation.

“We have long ceased to divide the problem geographically,” he goes on. “Ecology affects the whole world. The death penalty is applied in almost every continent. Financial corporations haven't had national identity for quite some time. And dictatorships exist not only in Belarus.”

When not directing and producing plays for Belarus Free Theatre, Khalezin adds, “We do talk about Belarus, about dictatorship, and try to do what is possible in order for politicians in the EU and the US to pay a proper attention to Belarus.” In his view, politicians failed in stopping the dictatorship in Belarus; and he now sees a parallel to the current situation between Russia and Ukraine.

Belarus
HowlRound TV Infrastructure Project in Central and Eastern Europe
Peacebuilding, Conflict Transformation, and Conflict Zones
Most Discussed
Designing Collaboration: In Search of a Taxonomy of Collaborative Methods
Emily McConnell
Most Watched
The Gathering from the CrossCurrents Festival
Wednesday 4 May to Saturday 7 May 2022
Upcoming
Livestreaming a Conversation: #DeafWoke with John Autry II
Friday 20 May 2022

I wish Belarus Free Theatre all the best, but the question about theater's impact on society wasn't answered. Possibly, that's because no one has any evidence that it does have an impact. Probably, it doesn't. The audience for serious plays, either drama or comedy, is very small. "Society" doesn't want to confront serious issues, so it doesn't which is why most social and political problems are not solved. There's very little, if any, chance that theater will impact that condition.

During the Nazi and then German occupation of Poland, Polish culture was kept alive through underground theatre. One of the student founders of an underground company, Karol Wojtyla of the Rhapsodic Theatre, became Pope John Paul II, who has been acknowledged as one of the pivotal causes of the fall of Communism in Eastern Europe. He supported the theatre while he was Archbishop because he understood first-hand the power of "cultural resistance" in keeping a community's identity alive against oppression. During the partition of Poland, the theatre kept the flame of Polish identity burning, even when Poland had disappeared from the map. In some areas of partition, the theatre and the church were the only public spaces the Polish language could be used. Theatre's effects on politics might not always be direct, but they can be powerful.

Correction: Nazi and then Soviet occupation.

Thank you for taking the time to post, Lynn. I have to agree with Cole Matson´s comments below, and disagree with your perspective that theatre & culture have very little impact on society. Belarus Free Theatre´s work, for example, must be taken in its context as originating from a country with severe censorship in the arts. The company--and sometimes, their audiences--have frequented been arrested for discussing topics that are contrary to the Lukashenko government "world-view": i.e., alcoholism, high suicide rate, sex-trafficking, political dissenters who "disappear", and more.

But history has numerous examples of how theatre, culture, and performance have contributed to changing society outside of the theatre´s doors. What about the Singing Revolution--public performances of songs in 1987-91 which helped liberate Estonia, Latvia, and Lithuania from their Communist rule? What of Arthur Kopit´s hugely successful play "Indians" in 1969, which contributed to the "reclaiming of Alcatraz" that year by Native Americans in San Francisco? What about the use of drama within correctional facilities in Cape Town and Johannesburg, South Africa, implemented in co-operation with Vardeteatret (Norway), which has helped lower recidivism by over 65%? What about the performance of "The Laramie Project" by Moisés Kaufman / Tectonic Theater Project at Bellarmine College Preparatory (San Jose, CA), directed by Tom Alessandri--a production which helped form the first-ever gay student-teacher alliance program on the all-boys school campus, a Jesuit School founded in 1851 (almost as old as the state of California itself)?

These are just a small sampling. There are many others. While the impact may not always been seen within hours or days after the play or performance concludes, cultural activities like theatre are a flexible, ancient form for a variety of purposes, not just entertainment.