The two executioners are casually talking shop while dining on strawberries and cream. As they compare how they work—one is paid per day, the other per killing—a man and a woman downstage of them are hooded, stripped naked, pushed onto a piece of black plastic, and pelted with apples and pineapples. Then the man, the woman, the apples, and the pineapples are wrapped in the black plastic as if they are garbage, and carried off. Oblivious, the two executioners, one from Thailand, the other from Belarus, keep talking; they mention, for example, their envy of the executioners in China: “They have a few thousand executed a year—we would've retired as millionaires there.”

Many consider the members of Belarus Free Theatre to be heroes for standing up to the dictator of Belarus,  Alexander Lukashenko, whose regime arrested and eventually banned the troupe.

It’s just another startling scene in Trash Cuisine, a sensuous work at LaMaMa’s Ellen Stewart Theatre through May 17 by Belarus Free Theatre, which promotes their piece as an exploration of capital punishment. But Trash Cuisine seems something more, and maybe also something less, than that. It provokes a huge number of questions, not the least of which is: What’s with the apples and the pineapples—and all the other food featured in the show? 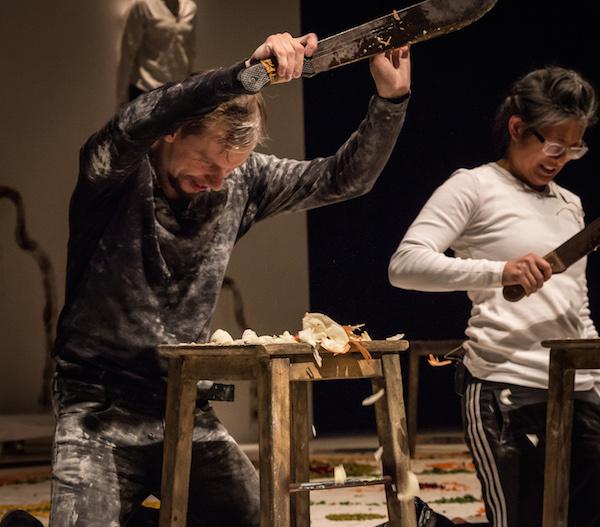 This is the fourth production I’ve seen by Belarus Free Theatre, the first performed in English and with a global scope. The company was founded ten years ago in Belarus, a former part of the Soviet Union that is now widely viewed as the most repressive and backward nation in Europe. Many consider the members of Belarus Free Theatre to be heroes for standing up to the dictator of Belarus, Alexander Lukashenko, whose regime arrested and eventually banned the troupe. Though several are now in exile, granted asylum, the company reportedly continues to perform secretly in Belarus, in private apartments. They also have toured forty-two countries.

It’s not just political solidarity that has made them so popular around the world. The shows they put on are astonishing feats of theatrical craftsmanship—and not (as is often the case these days) through any technical achievements, but through physical prowess as well as visual and choreographic imagination.

The eight performers of Trash Cuisine, armed with eight footstools, some dramatic lighting, and an underscore by a jazz guitarist, use dance-like movement to create compelling moments, often of great beauty. It doesn’t hurt that the performers themselves are lithe, graceful, and good-looking. 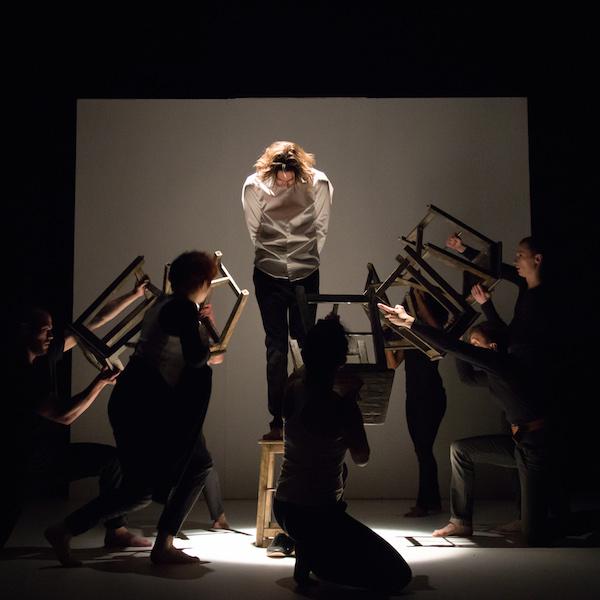 Written and designed by the troupe’s husband-wife founders Nicolai Khalezin and Natalia Kaliada, with contributions from the ensemble, Trash Cuisine is as much about food as it is about state-sanctioned cruelty. One of the performers portrays a chef, Pierre Noir, who conducts a cook’s tour of the world’s cuisines. Food is often used as props. There is a playful flour fight. The performers chop onions using machetes. Several meals are cooked on stage. 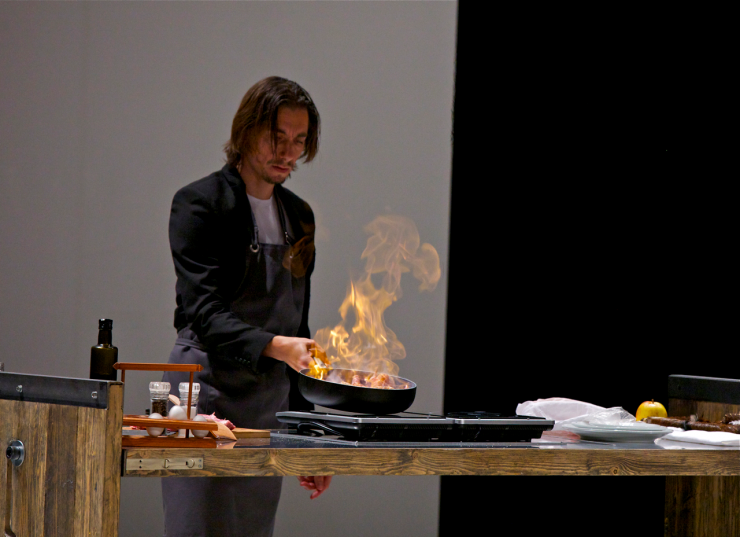 The show also intersperses short scenes from Shakespeare, and offers a musical interlude with the artful banging of a drum.

There is often something alluring about the troupe’s set pieces, even when four of the performers hold a fifth one down, covering his face with a cloth, while a sixth pours water on his face from a tea kettle—a very convincing presentation of water boarding, especially since the victim’s skin turns red with stress. 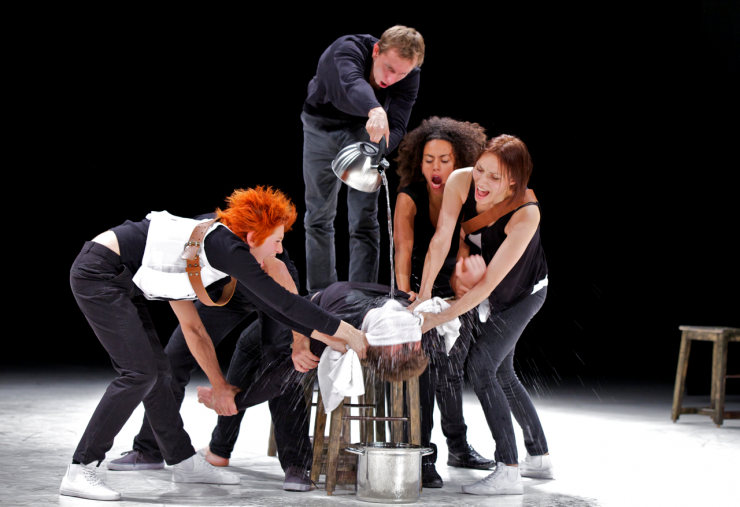 Another scene presents a man waltzing with a beautiful woman in a circle of light while four of the performers dressed like Ninja warriors crouch around the circumference. We soon realize that the man is hallucinating, having been locked up for a very long time. 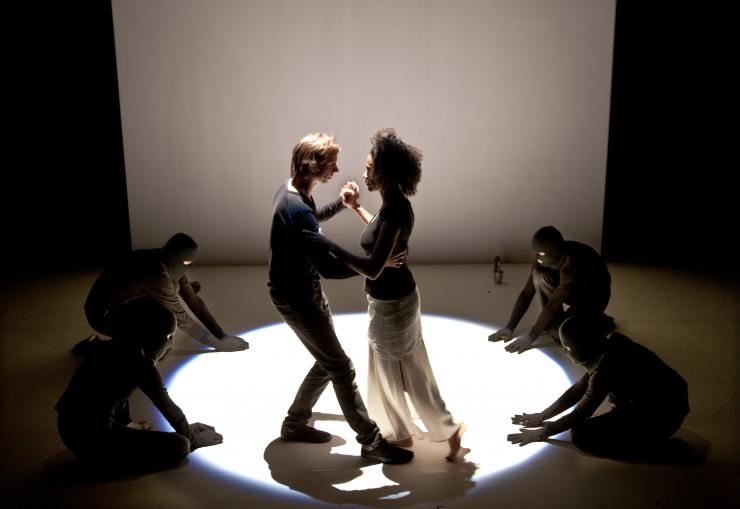 The shows they put on are astonishing feats of theatrical craftsmanship.. through physical prowess as well as visual and choreographic imagination.

These balletic pantomimes are paired with narratives—projected as text, or presented in voice-over—of specific real-life cases in Northern Ireland, Argentina, Rwanda, and the United States.

Does the show’s aesthetic appeal and creative overload undercut the political message? Shouldn’t we be focused on the subject matter, and repelled by it? There was only one moment in Trash Cuisine that caused people to walk out. One of the performers, Stephanie Pan, under the pretense of offering her “impressions” of various forms of execution, screamed for a minute in supposed imitation of the electric chair; we know it was a minute because there was a countdown from sixty seconds projected on the back wall. Many audience members held their ears. Then, when the counter had reached zero, she screeched for another sixty seconds, enhanced by the audio system to make it especially unbearable.

I’ve written before for HowlRound about plays that have made a difference in the world. Many that have produced concrete and measurable results have been more focused and more literal than Trash Cuisine. But there seem to be no set rules for plays categorized as political theatre; the variety of such shows that have opened in New York City just over the past few weeks is instructive. In Forged in Fire, Okello Kelo Sam has fashioned a play based on his and his brother’s direct experiences as forced child soldiers. Similarly, in Nirbhaya, a half dozen performers talk about their own personal experiences of rape and abuse as well as dramatize the infamous story of the abuse and murder of a specific woman on a New Delhi bus. Near the end of the show, one by one, the women raise their right hand in a gesture of community and defiance—a physical translation of what one character says out loud: "We can be silent no more."

But Grounded, a play by George Brant that imagines the emotional breakdown of a female drone pilot for the United States Air Force, is often described as political theatre. And David Hare’s Skylight, ostensibly about a lost love, is widely read as an exploration of the damage done by the policies of Margaret Thatcher in the United Kingdom. There are some choice monologues, such a discourse on the “self-pity of the rich” by the character Kyra (portrayed on Broadway by Carey Mulligan), a schoolteacher in an impoverished area who abruptly left rich restaurateur Tom (Bill Nighy) three years earlier:

The whole of society must get down on their knees and thank them, because they do something they no longer call “making money.” Now we must call it something much nicer. Now we must call it “the creation of wealth”… And the rest of us, we’re ungrateful ... we’re immoral ... we must simply be envious.

And so, while it may be difficult to fit all the pieces of Trash Cuisine under the rubric of political theatre, it’s impossible to see it as anything else. Still, one is left struggling to connect the dots. In one especially arresting monologue, Chef Pierre describes the preparation of a delicacy involving a small songbird called an Ortolan. The bird must be captured, blinded, force-fed for twenty-eight days until it’s four times its normal weight, and then drowned in Brandy. It is then cooked and eaten whole. After this description, Pierre covers his head with a napkin, and apparently eats one of these delicacies; we hear the bones crunching (grotesquely amplified).

So is the play equating capital punishment with cruelty to animals? Is it advocating for vegetarianism? Are the jarring juxtapositions of Trash Cuisine meant to impart the wisdom that, in life too, cruelty and beauty exist inextricably woven together?

It’s only in the voice-over monologue by an American attorney for a death row inmate named Nicky Ingram that the show makes a literal connection between food and execution, and it’s a beaut:

….when he was set to be executed I remember there was all this discussion about whether he would have a last meal. So of course the media… was.. making all these… statements and there was an article about.. what you would have for your last meal and they interviewed various chefs about what they would want and.. they'd go into all this fantastic food and the different wines they'd have, and I'm reading this and thinking, wow, I'd just throw up.

***
All photos by Jinyoul Lim.