Breaking Down the Walls

The following manifesto was presented as part of the American Voices New Play Institute's 21st Century Literary Office Convening that took place February 24 & 25, 2012 at Arena Stage in Washington, DC. Click here to watch a video of all five manifestos presented to the convening.

What remains is a place without walls, where the barriers of ego, elitism, and exclusion have been removed. Its function is that of a communal gathering place, perhaps resembling a coffee shop or the DC-restaurant Bus Boys and Poets, with couches, tables with internet ports–maybe a TV and magazines. There’s color everywhere–on the furniture and décor and the people that inhabit the space. It is known as the heart of the organization, the critical muscle that pumps out ideas, insights, arguments and questions repeatedly and rhythmically.

The term dramaturgy becomes the new hashtag. It is not precious and is owned by everyone. Saying “I practice dramaturgy” no longer generates the response of “drama-what?” or the familiar “Oh…” followed by silence or a subsequent reaction eliciting confusion, distaste or fear. When I first met my mentor, David Dower (at Bus Boys and Poets by the way), he talked about dramaturgy as integral to a theatre company’s thru line, such that every theatremaker holds the mission and vision of the art as their ultimate goal even if they explore different tactics on how to achieve them. A marketing manager practices dramaturgy by communicating to an audience to mission and vision of the art through website blurbs, posters and brochures. A development associate practices dramaturgy when they approach a potential funder, carrying and articulating the mission and vision of the art and why it needs the funders support to thrive. A casting director practices dramaturgy when casting a show by supporting the mission and the vision of the playwright’s intent and director’s concept with every person they call in. This philosophy and practice of dramaturgy should permeate to schools, universities, internships, apprenticeships–where the first word budding theatremakers hear when they step into a theatre, classroom or rehearsal hall is dramaturgy. 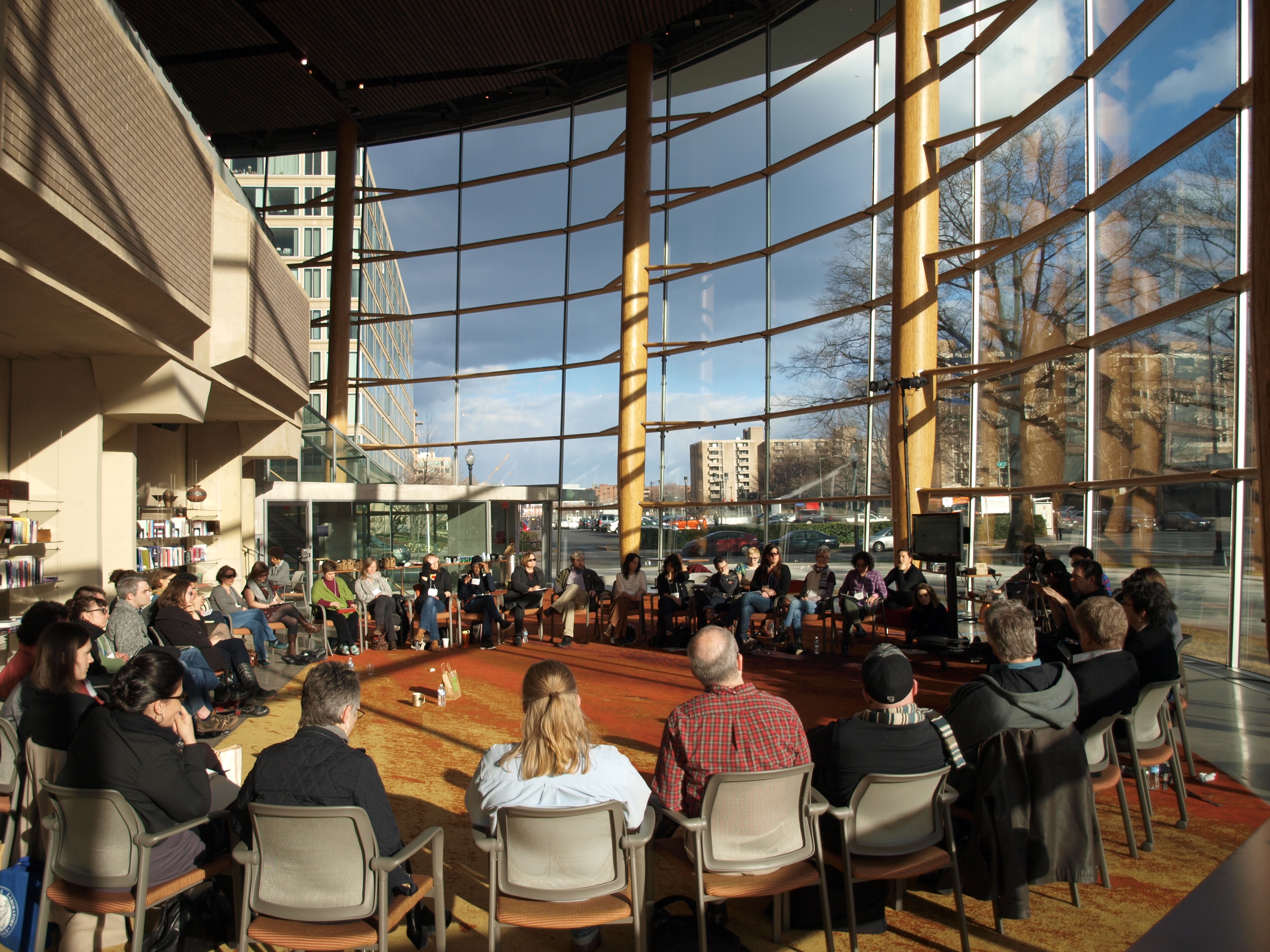 I love Morgan Jenness’ belief the origin and essence of dramaturgy is “to provoke.” We begin our provocation by releasing ourselves from the dead practices that surface as historical blueprints and developing fresh, vital ways of doing things that make sense to us. Shake up the presumably unshakeable. We find our inspirations for new practices not only from our experiences at the theatre, but with our experiences at museum exhibits, open mic nights, amusement parks, libraries, art galleries, dance performances, baseball games and concerts. We are guided by R. Buckminster Fuller’s notion of synergy, where the combination of two or more ideas function together to produce an outcome not independently obtainable.

Unique methods of interaction and conversation with audiences become essential, viewed as the broth for a soup rather than the saltines sprinkled on top. I look at the audience engagement at the Steppenwolf Theatre Company, with a post-show conversation following every performance facilitated by staff, interns and volunteers, or the Woolly Mammoth Theater Company–with playful, interactive lobby displays through their Connectivity department that encourage the girl that religiously follows Indian Standard Time to arrive at the theatre way before show time. This idea of engagement pre and post-show celebrates the experience of the art and the dialogue generated from it rather than assuming that two or three hours in a dark house are enough. Long gone are the days when we took the intimacy of the work onstage so seriously and didn’t care about the tone set from the moment the audience steps through the door. During the 2011 LMDA conference, Keynote Speaker Adam Lerner talked about how, “We spend so much time being excellent that we forget how to be awesome.” The value of a fun, synergetic atmosphere and more face-time becomes customary rather than an anomaly.

Now, let’s sit in our space without walls–to meditate, applaud, re-invent, and above all else, provoke.

There’s a strong adherence to one the universal mantras we learned when we were kids: sharing is caring. If we come across a playwright or ensemble’s exciting work and we care about the future of the work, we share our excitement with our theatre friends. We ask ourselves what’s best for the art rather than focusing on what makes us look the best while working on the art. We gravitate towards the notion of radical accessibility for the art and we raise our hand when we need help, trusting that the symbiosis of the sharing process will always lead to the best possible outcome. The other day, I received a letter from Indie Chi Productions, an independent theatre/film company in California. The letter stated that they were looking for a new full-length comedy or drama with leading roles for actresses age range 40-55 years old, expressing that they would greatly appreciate any referrals for material we find worthwhile. What a great way to solicit help from the opinions you value and duly expressing honesty and specificity about you needs?! In addition, we recognize that credit is shared, not limited. We spend more time highlighting the bright spots we see in the field today and complimenting the people and places that keep the work alive and fight for its survival.

As I reflect on this dream for the future and look around the room today, the dream appears less impossible. We already have put so much of this in motion (hello, bright spots). During the next few days, as we wrestle with the ideas of renaming the literary office, of gatekeepers and yes men, it is my hope that we view the future as close as a block down the street rather than five miles away, and yet don’t rest on our laurels that we will arrive at our destination without effort and dedication. Now, let’s sit in our space without walls–to meditate, applaud, re-invent, and above all else, provoke.

Beautiful article - thanks so much for sharing it!

Great presentation Amrita.. enjoyed the outlining of the importance of sharing, honesty and synergy in creating the best theater experience for all!

Totally dig "[Dramaturg] is not precious and is owned by everyone." And when I think "everyone" (and I think you do too Amrita) it is truly everyone - PW to director to actor to designer to marketing, development, ushers... and to the audience. Curious (and this is an un-refined thought): Unity of purpose around (and through) each play/production and being truly inclusive in exploring/fostering/maintaining that unity of purpose is what elevates great productions at great theaters into art? Does the "literary dept" become the "unity dept"?