Challenging the Narrative of Disability On Stage

My Asperger's is the last thing people see when I am on stage. If it's visible, it isn't an abnormality, hindrance, or liability like it is in the world outside the stage door. A lot of people think that people with Asperger's cannot read body language and pick up social cues. It would be unfair to say that theatre didn't teach me these skills because that is what creating theatre is all about. It would also be unfair to say that Asperger's prevents me from getting work. I have had scripts read and produced at theatres, and I can honestly tell you that Asperger’s Syndrome has greatly contributed to my professional life as a theatre artist.

As an actor, I pay attention to the body language of a character. I can’t say I do that more than an able-bodied/able-minded actor, but it does help when I create characters. I use this same attention to detail when I write and edit my scripts. By reading body language, I can incorporate gestures and non-verbal cues into stage directions. And by paying attention to tone, I can write my characters in a way that best represents their voices. The natural observation that Asperger’s gives a person is useful when capturing and writing dialogue. When I hear feedback about a budding script, I pay close attention to what the actors say as much as I pay attention to what directors, producers, development directors, and audiences think. I believe that Asperger's gives me a big picture perspective all the time, and that my eyes act as a 360-degree camera looking around, capturing nuances.

When it comes to Asperger’s so many see a hindrance, a spectrum, a liability, and a limitation, but I see possibility, a help, depth, and positivity. My view is not narrowed by perception; it is lengthened by my width of perception.

As a professional thespian I use my talents to challenge, confront, and change this dehumanizing status quo. In 2012, I had a workshop production at Cleveland Public Theatre of a play called Depth Perception, which was based on my experiences with Asperger's. I wrote the play because I recognized a trend in portraying autistic characters with increased abilities, like The Curious Incident of the Dog in the Night-Time and Flowers For Algernon, or portraying them as sidekicks. I was so sick of the inspiration porn written by able-bodied/able-minded individuals, and was tired of dramatically being viewed as a test for an able-bodied/able-minded character, and so sick of the supportive role pipeline.

I wanted to show that Asperger's is a part of me, and not all of me, and that the frame of my dramatic exploration is not from my difference, but from being different in an unaccepting world. 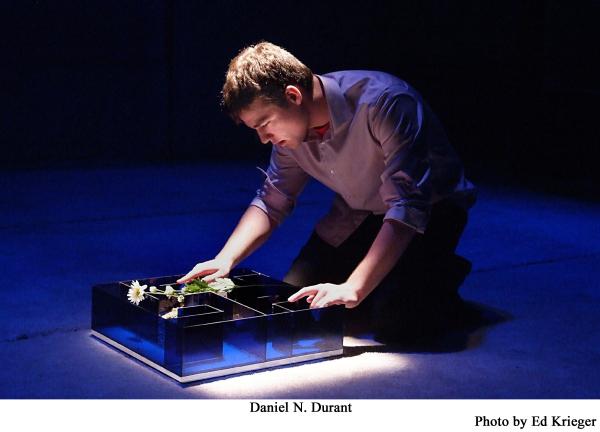 I wanted to show that Asperger's is a part of me, and not all of me, and that the frame of my dramatic exploration is not from my difference, but from being different in an unaccepting world. I told my life story in a dramatic, non-linear way that showed the dimensions of one aspect of my identity that I cannot change, and am proud of. Workshopping Depth Perception at Cleveland Public Theatre gave me the space to work on the production, act in it, and really see if challenging the narrative of disability was a worthwhile venture. I was able to write a full play, and workshop a fifteen-minute excerpt of the script. The excerpt was received well, and gave me a lot to look into and explore.

After the workshop of Depth Perception, I was inspired to create a blog about the reality versus the illusion of living with Asperger’s. I look forward to returning to the script with new insights, and eventually hope to see a full production of it.

I choose to tell my story through the medium of theatre because I have found refuge through performing and playwriting—theatre gave me the confidence to openly be myself and to tell my own story. And now I know, take, and give cues from, and utilize and create scripts that help me through social situations. I don’t “cope” with my Asperger’s or view it as a hindrance. I don't think about how brave I am in stepping on stage to audition and having a play of mine read, though many count it brave for me to do so. I am glad a theatre who tests cultural narratives through production and outreach gave me a safe space to express myself freely, and provided a home and space for the development of my play. There is a need for more theatres to create safe spaces for people of all abilities to share their stories told without judgment or stigma.

I'm currently exploring representations of autism in theatre and I would love to include your play and your perspective in my research. Please contact me if you would be willing to let me read Depth Perception, and perhaps chat with me about it afterwards.

Dear Tim,thanks so much for this. I would also love to read the script of this project, if it is available?

Hi Katie,I have to resurrect it from my old desktop which may have crashed a couple of years ago. I hope to retrieve it soon. I'd happily pass it along once it's retrieved.

Hi Tim, As another actor on the spectrum, I appreciate your straightforward and honest treatment of the topic of neurodiversity in acting. Thanks for speaking up and for your great work. I'd love to read "Depth Perception." How might I find it? [[email protected]] Thanks. Sam

I would have to retrieve it from my old computer which files haven't been retrieved. I don't believe it is lost forever though, as I hope that I will get, help in doing so and begin work on the script again, and send you what I was working on.

Dear Tm,
I am fascinated to read this and have a project I'd love you to consider. Can you email me at [email protected]?
best
Philippa kelly

Sure! Look for an email from me soon!