I began my tenure as Mellon Foundation Playwright-in-Residence in 2016 with Boston, Massachusetts’ Company One Theatre (C1)—an organization that had been an artistic home to me long before I was part of the Mellon cohort. In a way, I grew up professionally with Company One, finding my footing as an emerging playwright both locally and nationally as C1 also grew in professionalism and reputation. One of the most fascinating elements of my work on staff here during the residency has been participating in C1’s revision of its mission to more transparently work for social justice and the subsequent programmatic adjustments in support of that mission. I’ve been part of department meetings, staff meetings, company retreats, production meetings, rehearsal processes, and community events where the coalescing questions are always: Are we being honest? Are we dreaming big enough? Is what we’re doing contributing positively to a healthier, more just, and more equitable Boston?

As a playwright, it’s with some chagrin that I admit I’ve spent the better part of my real adult life avoiding having the type of nine-to-five job that requires me to sit in meetings. When I say this, some perhaps assume I do not enjoy people. But as a mostly extroverted Leo, that is not true. When one writes full-time, one quickly learns a day is easily devoured by everything but writing, and that no one will give you that time—you must demand it. Meetings complicate that.

Even so, I spend most C1 meetings in a state of wonder. I am amazed by my colleagues—the breadth of their knowledge, the reach and scope of their empathy and innovation. And since I am an artist—and have been since I was very small—looking in from the outer banks, I am often just overwhelmed by the business of doing business. I am a rather slow thinker. I am quiet in groups. Sitting in the room where it happens during my residency has been no different. Awe. Wonder.

Are we being honest? Are we dreaming big enough? Is what we’re doing contributing positively to a healthier, more just, and more equitable Boston?

Watching the company’s transition from simply doing meaningful work (which is admittedly commendable in its own right) to consciously articulating the choices that support the curation of that work to audiences and community partners has fueled this awe and wonder. Those sitting alongside me in these meetings have made the mindful decision to uplift and make visible the mission-driven decision-making that underpins C1’s programming.

The impetus as an organization to do better and evoke change has been a constant, but after some deep institutional and personal reflection, staff realized that producing exuberant plays that pose questions about race, class, and justice isn’t, by itself, really enough. Especially when plays examine those questions via image and metaphor, or ask audiences to sit with their own discomfort and uncertainty. In such instances, instead of just hoping an audience member walks away with an understanding of how the play’s themes relate to their own community, or what action steps one might take for social change, C1 decided it had to do better at spelling it out. What emerged from that realization was C1’s “Amplify Language.”

Shawn LaCount, the company’s artistic director, describes Amplify Language as the “short list of ideas used for each production to explain to audiences why we selected that play, and more specifically what we perceive the social value of the play to be.” In five or six clear bullet points, Amplify Language speaks to the pressing civic and political issues C1 wants audiences to engage with by seeing the production, the community partners or local grassroots organizations it can highlight as doing important on-the-ground work on issues related to the play, and steps audience members can opt into should they be moved to action by what they’ve seen. That list of bullet points is used absolutely everywhere: on mailings, in programs, for press releases, on the website and production blogs, and in person with stakeholders, audiences, and community partners. Now there’s no guessing about how C1 envisions each production as part of a larger project of working toward social change and a more equitable future. 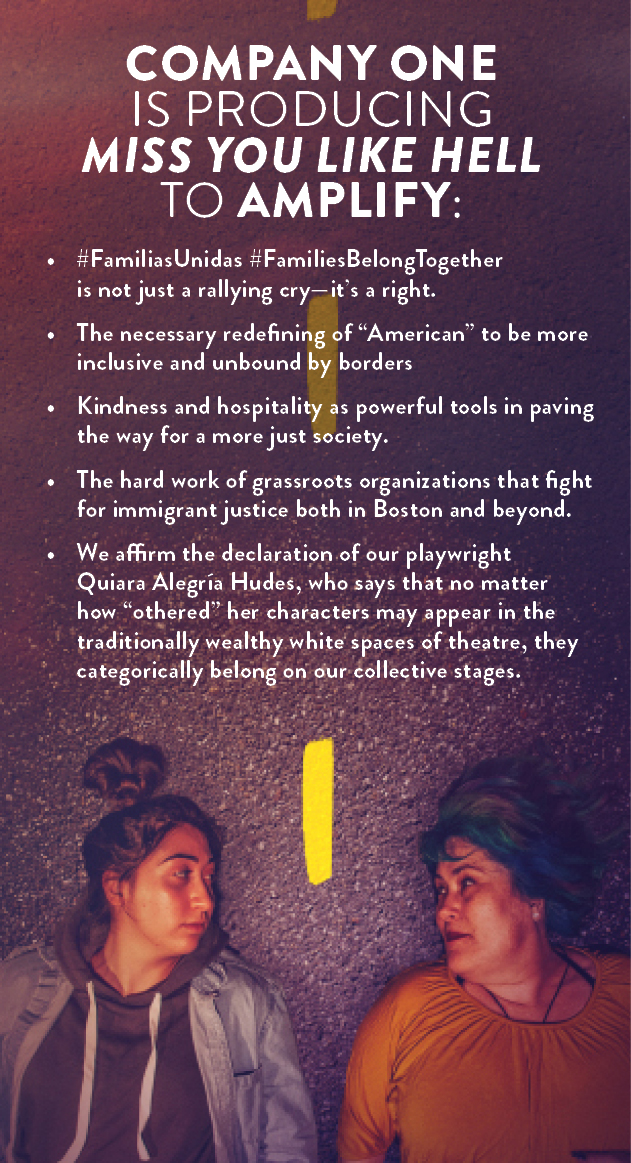 This aspect of partnering and connecting is foundational for how Amplify Language functions at C1. Ilana M. Brownstein, director of new work, imagines how it can be a model for others in the field:

We all need more tools for connecting with stakeholders in our communities, to bring them into our work and to create partnerships that enrich the theatre and community at large. This is especially important when PWIs [predominantly white institutions] seek to work with communities of color or to leverage resources to address social issues. Transparency in the ‘why’ of a production (why this? why now? why us?) helps begin to build bridges of trust. Learning how to craft and use Amplify Language has been a strong step forward for us.

All this “why this? why now?” is familiar to playwrights. If you’ve been through a script development process, you’ve most likely had this asked of your play.

What I discovered during my first weeks at C1 was that meetings are not passive endeavors. The power structure is horizontal. The knowledge is collective, and the company thrives from the voices of the many, not the views of a few “at the top.” Amplify Language is most often created as a collaboration between associate artistic director Summer L. Williams in the Connectivity Department and the dramaturgy team led by Brownstein. And the first draft is never “it.” The second draft, the fifth draft is never “it.” The process is designed for a hashing and rehashing of company ideals and values, married to the playwright’s intent, the director’s vision, and the sociopolitical climate. The “why” and the wonder and the action are intermingled. (Meetings, where have you been all my life?) By the time the draft is finished, the draft number or bullet-point authorship is beside the point. Connecting intent to community partners, audiences, and allies is.

Producing exuberant plays that pose questions about race, class, and justice isn’t, by itself, really enough. Especially when plays examine those questions via image and metaphor, or ask audiences to sit with their own discomfort and uncertainty.

Like many other theatre companies, the COVID-19 global pandemic has demanded that C1 take a long, hard look at its season, its finances, and its audiences and make some difficult decisions. And, like other theatre companies, we came to the decision to cancel our in-person programming for the foreseeable future. No rehearsals. No productions. No face-to-face theatre training. What to do in their stead? Given that C1 defines its mission as building community at the intersection of art and social change, the answer to that question can be found within the needs of the communities the company partners with.

At the start of the shutdown, the discussions of “what now?” were deeply rooted in “what’s needed?” as opposed to “what do we want to do?” C1’s staff began the arduous discussions of “why this, why now” about what kind of online programming could take the place of Clare Barron’s stunning Dance Nation (rageful tears that it’s not going up this year) and Inda Craig-Galván’s essential Black Super Hero Magic Mama (audible scream at the same). A proverbial fly on the wall would have been able to witness the development of C1’s Amplify Language in action as we attempted to work it out on Zoom, just scores of tiny squares of people’s faces, trying to problem-solve a pandemic from our bedrooms and couches. (Please note, that fly is not me. While still ever quiet in meetings—I chalk this up to my time in Quaker school and what I, in particular, learned there—I’m in the fire with everyone else, trying to puzzle it out while staying true to mission.)

It turns out that what Boston might need from an organization dedicated to both art and social change is... more social change. Since COVID-19 has had a markedly devastating effect on Black and brown communities, since the rhetoric surrounding the virus has precipitated further upticks in xenophobia against Asian and immigrant communities, and since the pandemic has also irritated housing and food instability in Greater Boston, we felt that C1’s strength at this time was to promote work that could help combat these issues by organizing events that galvanize immediate help and solutions, whether that be through a speakers series, a writing series, or town hall–style virtual gatherings. Amplify Language helps support all of that. It delineates meaning for staff, administration, community, and audiences alike.

On 12 June, the C1 staff gathered in our now ubiquitous zoom squares with the same titillation we used to bring to an opening night to watch the first installment of our Better Future Series: The Chinatown Imperative. The chat was vibrant with comments and questions for our guest artists and community activists. Watching it, I thought about the fact that the incorporation of C1’s Amplify Language has made me pay attention to our programming differently. As I experience a run—whether that run is four weeks or four hours—I return to the questions my fellow staff members and I raised about the programming, no matter what type of event it is, way back at its first inception. Being part of this work has been time well spent.

I just got to this essay but I am feeling so inspired to bring some of these methods to my work in Jersey City/NYC. Thank you!!

inspiring! powerful! thank you for articulating so many reasons for the YES to theatre.

Thanks Melinda. I'm hoping the YES will see us through the difficult parts of this time.