Why Every Working Mother (Parent) Needs a Stage Manager

Playwright Elyzabeth Gregory Wilder returns to the Alabama Shakespeare Festival’s Southern Writers’ Project with a new play and a new kid. Follow Elyzabeth in part two of this three part series (find part one here) as she tries to balance rewrites and rehearsals with the challenges of being a working mom on the road.

If my daughter wanted a pony, now would be the perfect time to ask. Leaving her at daycare with the Nice Methodists—all day—was harder than I anticipated. We visited the school on Monday so that she could meet Miss Jackie and Miss Sherry. She sat with them during circle time and sang songs. I beamed with pride when she—the youngest in the class by two whole months—was able to call out most of the letters and shapes that Miss Sherry held up. But as soon as we walked in the door this morning she was on to me. Thanks to her fabulous caregivers the transition was less traumatic for her than for me. I cried. I won’t lie.

I headed to the theater for the company meeting, which kicks off the Southern Writers’ Project each year. It’s like old home week with actors, directors and dramaturges, many of whom return year after year, catching up with one another. If you’ve ever been to a new play festival you know that’s it’s really just camp for grown ups. 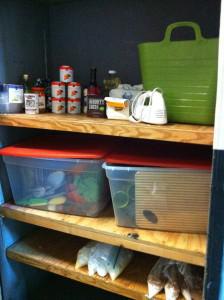 One of the things I’ve learned from workshopping my plays is that all of the problems can’t be fixed in the four or five days that you are given. In order to avoid feeling like a complete failure, I always go into the week with a list of four or five specific issues or goals. If I can address those things then I feel like I’ve earned my keep. Anything above and beyond that is icing on the cake. It keeps me from feeling overwhelmed. Our main goal this week is to take a piece that was written for an intimate space and an audience of twelve and open it up to a larger audience without losing the intimacy. Ideas were bounced around and a game plan for the next day of rehearsals was discussed.

When we broke for lunch there was a company picnic. There is always good eating to be had during the Southern Writers’ Project. Any theater that has their own barbeque and smoker can’t be all bad. There are five children under the age of two whose parents are participating this year. We all went off to retrieve our respective kids so that we could show them off. When I arrived at daycare The Short Person was on the playground. Seeing your kid run to you with open arms really is a little bit of fabulous. I hope she’s still that happy to see me when she’s sixteen and I show up at school unannounced.

These plays are our children and we want to give them all the tools they need to thrive in the real world.

We made our way back to the theater where the Short Person worked the room like an old pro. All of the theater mommies congregated in our own corner of the courtyard and tried to make sure no one fell, threw dirt, or stole anyone else’s drink. We all traded stories about packing and logistics.

It made me happy. Before I had The Short Person I knew so many theater families who would traipse off for summer stock or to workshop a new play, with their children along for the adventure.  It might not be a typical childhood, but it is one filled with interesting people and experiences.  Somehow we make it all work and hope that our kids grow up to be well-adjusted adults.

When we returned to our apartment there was an email waiting from our stage manager. Let me just say that every mother needs her own stage manager. If every mother had their own stage manager we would all start our day with a list of things to do, timed out in fifteen minute intervals. We would always have a sharpened pencil on hand, the occasional homemade baked good, and the miraculously ability to fix just about anything with gaff tape. And most importantly, we would have someone to keep us all on task and make sure that we got a break every two hours.

When I read the online Mommy Blogs about women who have three kids under the age of five, make all of their organic meals from scratch, volunteer at their church, have everything in their house organized in color coded bins, and still manage to sew all of their children’s clothes and write about it, I think that perhaps they secretly have their own personal stage manager.

Tomorrow we put the show on its feet and see if it is strong enough to stand on its own. One of the things I love most about being here is that it’s a great place to succeed, but it’s also a safe place to fail. This is a week all about taking risks. These plays are our children and we want to give them all the tools they need to thrive in the real world.