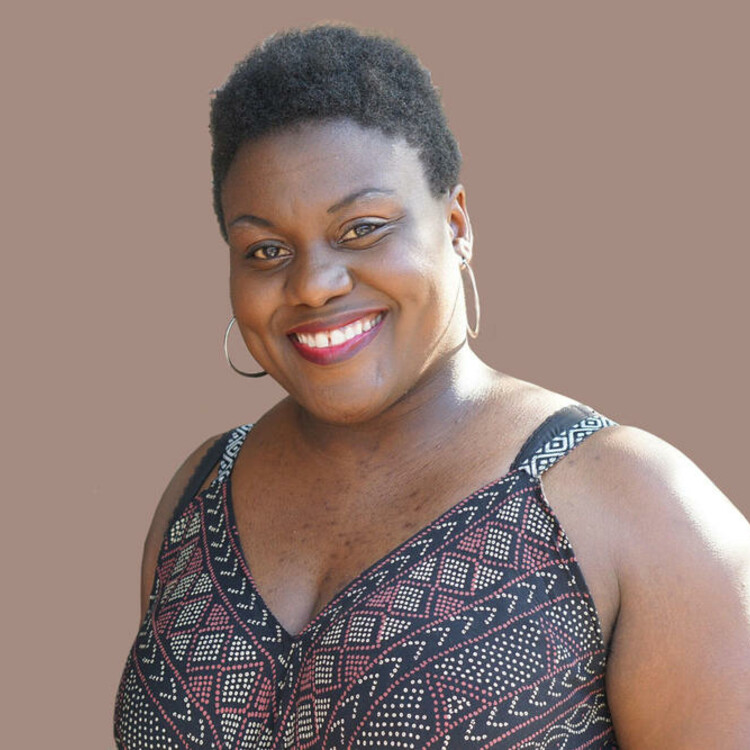 The Los Angeles Theatre Center partnered with The Andrew W. Mellon Foundation to provide fellowships in a program to coincide with the Encuentro 2014, a National Theatre Festival, in response to a need to foster emerging arts leaders who will guide the courses of culturally specific and poly-cultural arts institutions in a country with rapidly shifting demographics. This report is part of a series of responses from some of the Mellon Fellows.

To be honest, I didn’t enter Encuentro 2014 at the Los Angeles Theatre Center (LATC) already in the know about —of Latina/o theater. I entered the space as a Black woman and theater practitioner. I entered with a large amount of interest and yet, also, unfamiliarity with the grandness of Encuentro 2014. So just in case you’re brand new too, here are the basics. Encuentro 2014 was one of the largest gathering of Latina/o theater artists in the United States to my knowledge. The Encuentro hosted nineteen performances by various Latina/o companies and practitioners from around the nation and Puerto Rico. Interested in training the next generation of artistic directors and leaders, the Latino Theatre Company (with support from The Andrew W. Mellon Foundation) developed the Mellon Artistic Leadership Fellowship program. The fellowship program brought ten emerging artistic leaders of color to the LATC to help produce the Encuentro and learn the necessary tools for creative and administrative leadership. As a fellow working on the festival, I noticed that there was an overwhelming sense and recognition that in helping to build this festival, we were contributing to the creation of a brilliant historical moment. The Encuentro was situated both as the descendent of the TENAZ theater festivals and a landmark for future exchanges and sharing of Latina/o theater and performance. Each fellow had the opportunity to lead a devising group comprised of artists from various companies participating in the Encuentro. Each fellow was also paired with a company as a producer and representative of the LATC. Perhaps most importantly, each fellow and artist participating in the festival was scheduled to see every production presented at the Encuentro. This component of the festival afforded us to be able to engage in a larger conversation about the current state of Latino/a theater, nationally.

I had the privilege of working with Teatro Luna on their production of Emilo Williams’ Your Problem with Men. The members of the company offered me a safe space to process the Encuentro—we shared learning moments from the festival—and they gave me opportunities to creatively engage in their playmaking process. As a Black woman, millennial, playwright, and producer who is not Latina, I felt acutely aware of the gestures of absolute inclusivity, both small and large, that comprised my Encuentro experience. I can say with all honesty that my work with Teatro Luna and my fellowship cohort are the greatest takeaway from this experience.

During my time at the LATC, I considered my own commitment to cultural and political solidarity through the personal and political acts of home making, art making, and change making. I was committed to the work of “home making,” meaning the act of extending a network and creating a culture of warmth and hospitality. I was committed to art making at every creative moment of the devising sessions; moments in which we turned each others’ methodologies inside out, and built something new together. Finally, I was in service of change making at this Encuentro. I committed to the ongoing change making through advocating and contributing to a space dedicated to discussing the aesthetic and programmatic continuum of the Encuentro and its larger political implications for the American Theater. 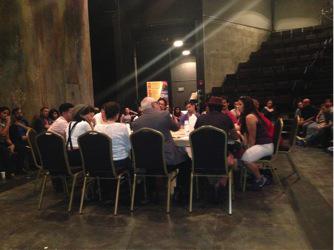 One of the main disagreements that we encounter concerns the spaces in which resistances should be deployed and the type of relation to be established with the institutions. Should critical artistic practices engage with current institutions with the aim of transforming them or should they desert them altogether?
—Chantal Mouffe, “Artistic Strategies in Politics and Political Strategies in Art,” Hemispheric Institute's E-misferica on Dissidence

I have come to believe that part of my role, as an allied woman of color fellow and artist was to stand witness to these questions and conversations. I find this witnessing to be a revolutionary act in itself. I have rarely existed in multigenerational, creative, and safe spaces where I am empowered to learn in public and without taking offense to my own prior ignorance. My allyship was further informed by the very experience of being part of this momentous encounter. Despite the fact that most of the stories on stage are not derivative of my own culture, the little Black girl in me who dreamed of being a producer was still awestruck at the majesty of a gathering this impactful—a gathering that was programmed and produced by people of color. In this way, my allyship asked me to consider how I could both be of service to this work and know that it is also my own.

I can witness that through the act of creating this Encuentro, the LATC and the Latina/o Theatre Commons constructed a radically subjective and open space for the conveners, festival artists and audiences to wrestle in conversation with each other. The artists were welcomed to employ the creatively generative processes of naming and articulating collective aesthetic trends, the political power of Latina/o theater, and the collective financial agency of Latina/o theater institutions. At this Encuentro we came together and imagined what could be possible, challenged what was missing, and built upon about what already exists.

Thanks for your reflection Arielle. I have two questions: What is allyship? What is a culturally specific theatre?

Thanks for your reflection Arielle.
I have two questions:
What is allyship?
What is a culturally specific theatre?

I ask this because I've seen these two phrases a lot in the last two years and I'm interested to hear your take on what they mean for you.

An Ally for who?! Why?! What is the requirement to be one?!
Culturally specific in relation to what?! Why the urge to call it this?!

This is powerful. Thank you for your reflections. I am inspired.